I have had a lot of fun with Lost Ark since its release. I’ve enjoyed playing through 8 different classes so far, and while I have used the 3 power passes, I have also leveled multiple characters from 1 to 50. The game has a lot to offer for those willing to explore the island content while working their way to Tier 3. I was hoping that the April patch would increase my enjoyment of playing Lost Ark even more. Unfortunately, while it did add some great story elements within the new South Vern area, several issues keep me from completely enjoying my time spent in Arkesia.

First, let me say that getting to item level 1340 to access South Vern was rough. I didn’t optimize getting materials for one specific character, and I enjoy playing different alts. I was able to hit 1340 before the end of April primarily because of the extra materials from the Ark Pass. Those players who work to hone gear efficiently or are willing to put in some extra cash shouldn’t have had an issue to reach the same point. But I can see how many players could struggle to unlock the new content due to a lack of materials or simply having bad luck when honing. 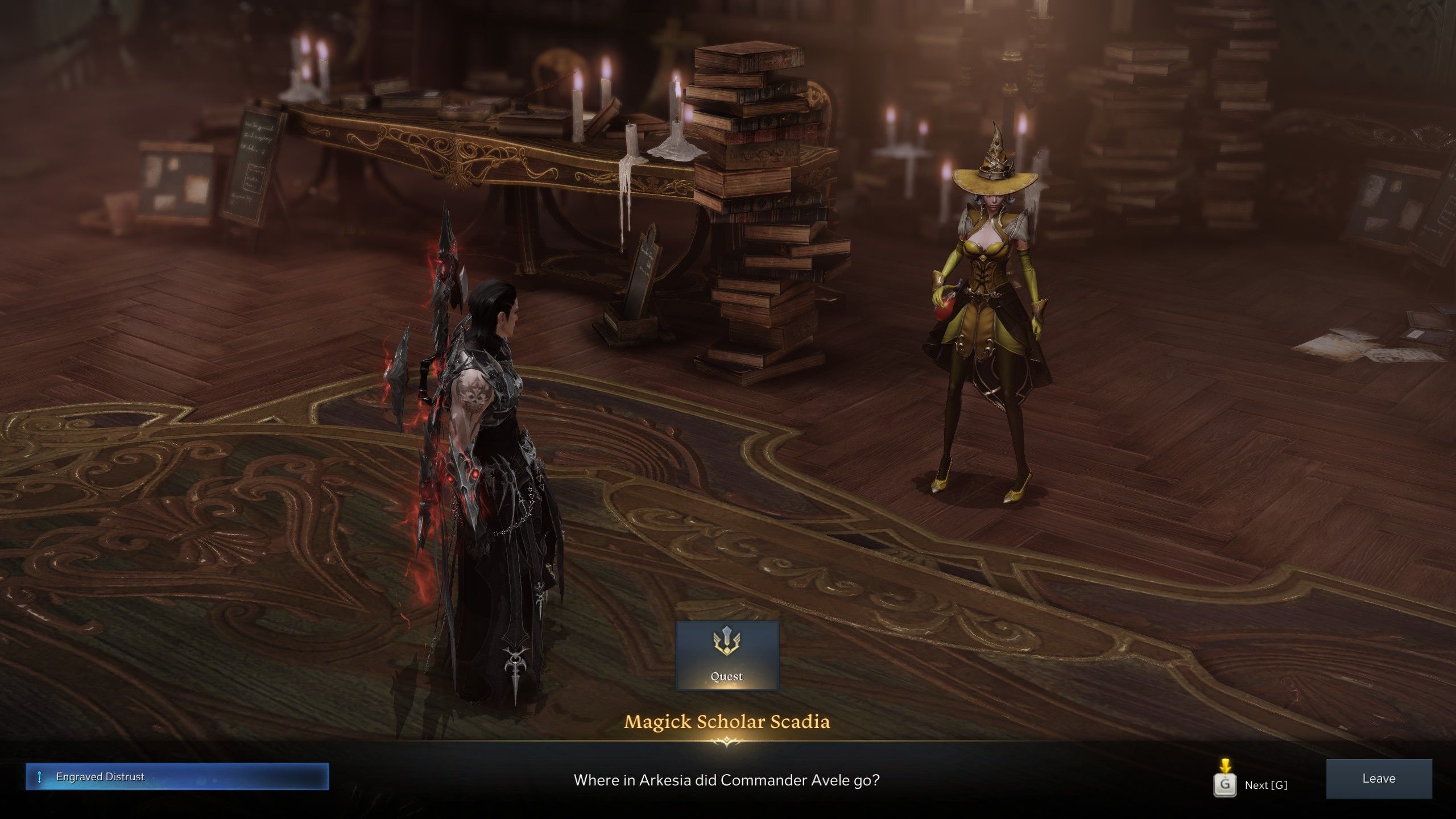 Once unlocked, the story revolves around the formation of a new knightly order, the Black Knights, by the senate of Vern and Avele, the missing leader of the Lunar Knights. As players progress, you also learn more about the disbanded order of Solar Knights. It makes for an engaging story and brings together many of the factions/characters players have encountered so far in Lost Ark. It had the potential to be a grand immersive story with a good mix of environments to explore and experience. It is not overly long to finish however, only taking me a day.

Players also adventure with several characters, new and old. All the events eventually come together in some amazing battles. That, unfortunately, is lessened by the mediocre to bad voice acting, which doesn’t always match up with subtitles. This disconnect completely broke the flow and immersion for me on multiple occasions. In one central cinematic, an NPC states something to the effect that it looks like the defenses are already working… and my immediate thought was, “well, OK, why am I here then”. I am convinced that what was meant to be said was that something is already damaging or affecting the defenses. 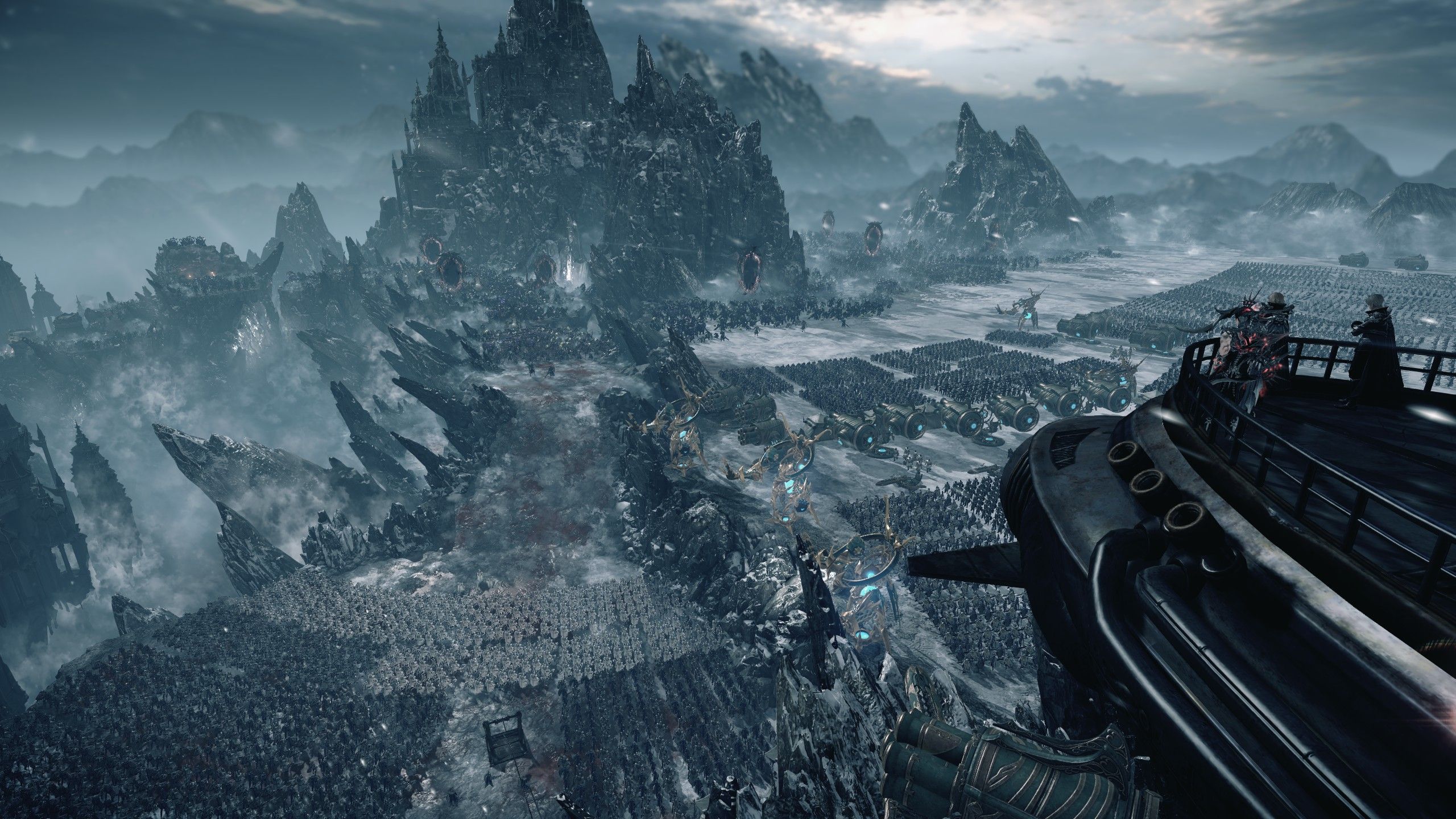 Just one localization mistake wouldn't have been to bad. But I kept seeing the disconnect between the voice-over, text, and story beats. Even some of the journal entries still don’t match up with the emotes you need to use for quests. All the small mistakes just piled together.

The climax of the South Vern story could have been an amazing experience, even though the in-between connective story tissue at times fell flat. In those uninteresting story sections, it was tempting to follow the meme, continually hitting the G key to get through some of the content. But I would have missed really interesting moments along the way, so I am glad that I resisted the urge. 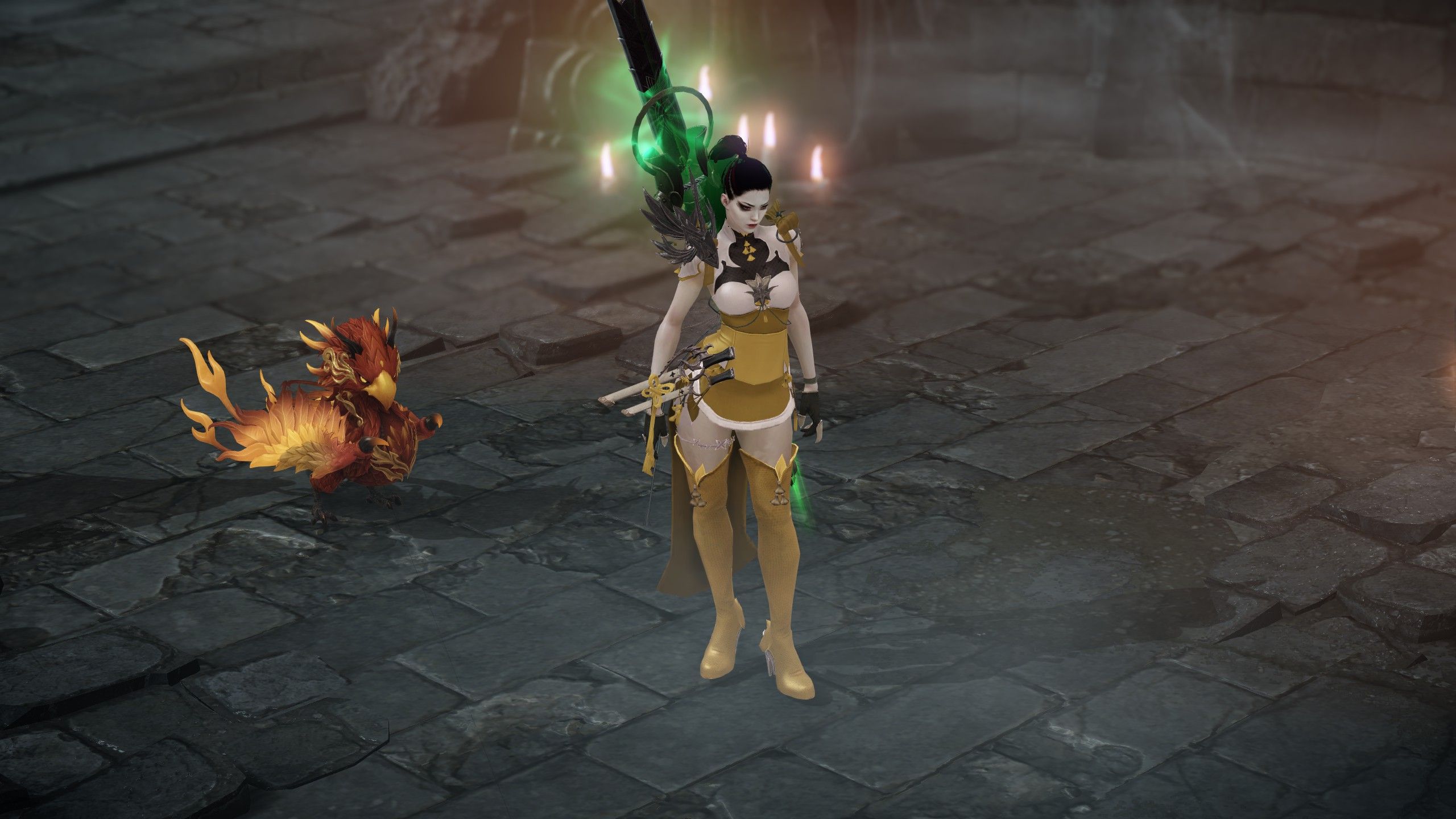 Lost Ark’s new class is personally a middle-of-the-road experience, and I am not a fan of the NA name change. It is not the worse name change in the NA version of the game, but it is close. It is a female martial artist that uses a two-handed spear/polearm. They swap between two stances during combat, flurry, and focus. Flurry stance is typically useful for clearing larger packs of enemies, while focus does more damage to single targets and has a decent defensive ability. Once a Glaivier builds up a full gauge while in one stance, they get a combat buff after swapping to the second stance.

I used my Feiton power pass to boost one up quickly and played with the Pinnacle class engraving, enhancing the combat buff gained after switching to a new stance. The Control class engraving didn’t interest me since it eliminated using the focus stance completely. It should also be notes that I didn’t have a fully kit for gems or engraving so I was not running an optimal build. 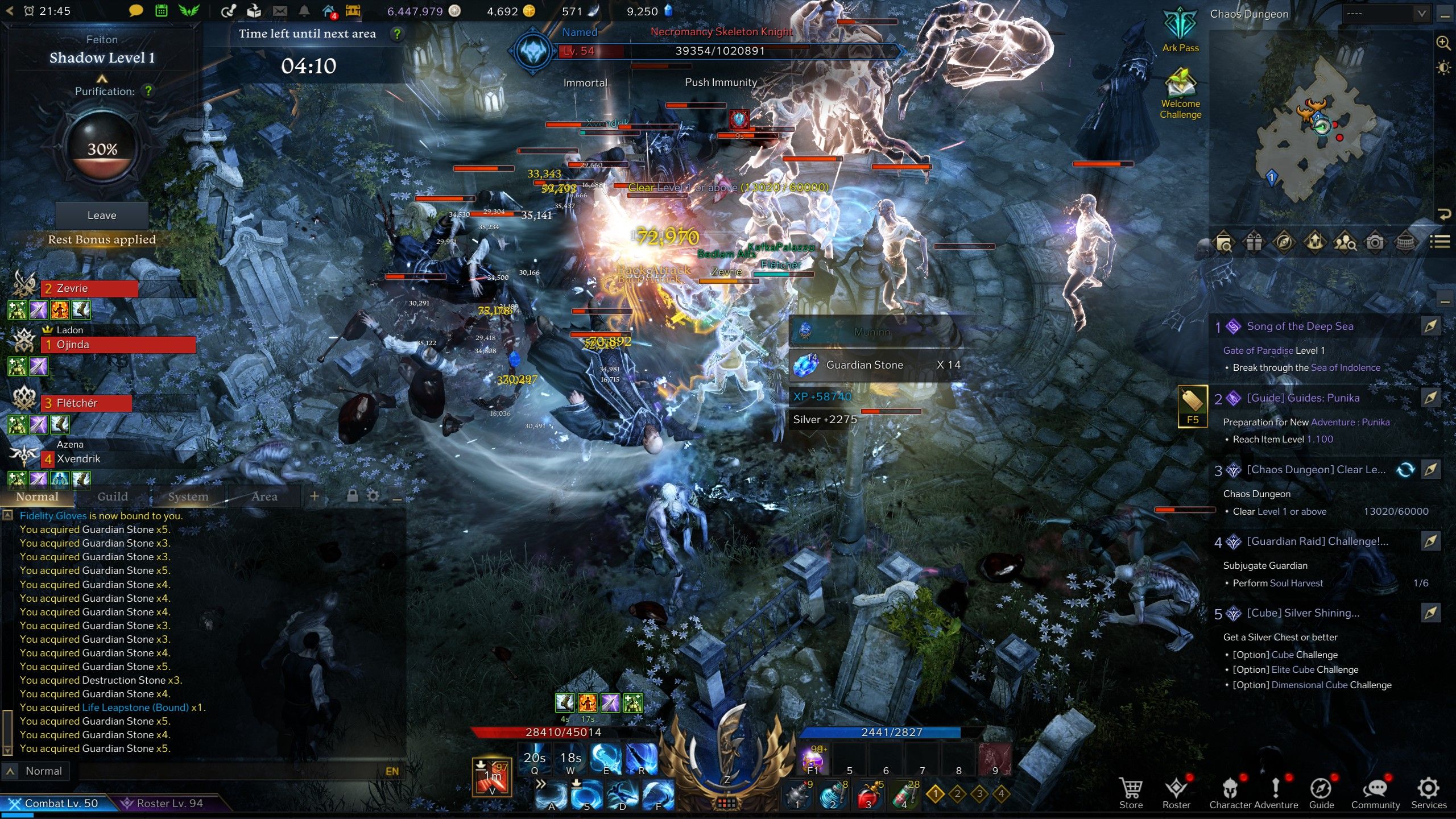 At first, the class is fun, but it feels middle of the pack after playing it for a few days. Because you are a Martial Artist, your mistakes can cause death swiftly and you can be easily overwhelmed. I am just not having fun with the Glaivier, and I am starting to regret not boosting a Deathblade. It constantly feels like I am not doing enough damage. I also need to make sure that I am positioned out of the way while combat animations are executing. If you like the aesthetic of a female Martial Artist that uses a polearm, then this may be the class for you. But for me, they have already been moved to my second character selection screen and will likely be forgotten until the game’s meta changes.

With April’s patch came two additions that have helped players with more materials. The Ark Pass is an amazing benefit for players who log in to play the game regularly over a couple of months along with a mount in the free tier. The rewards can be stored in your roster’s bank space before opening them and then be used to help advance one or more characters when honing gear. It is the primary reason I hit 1340 before the end of the month. 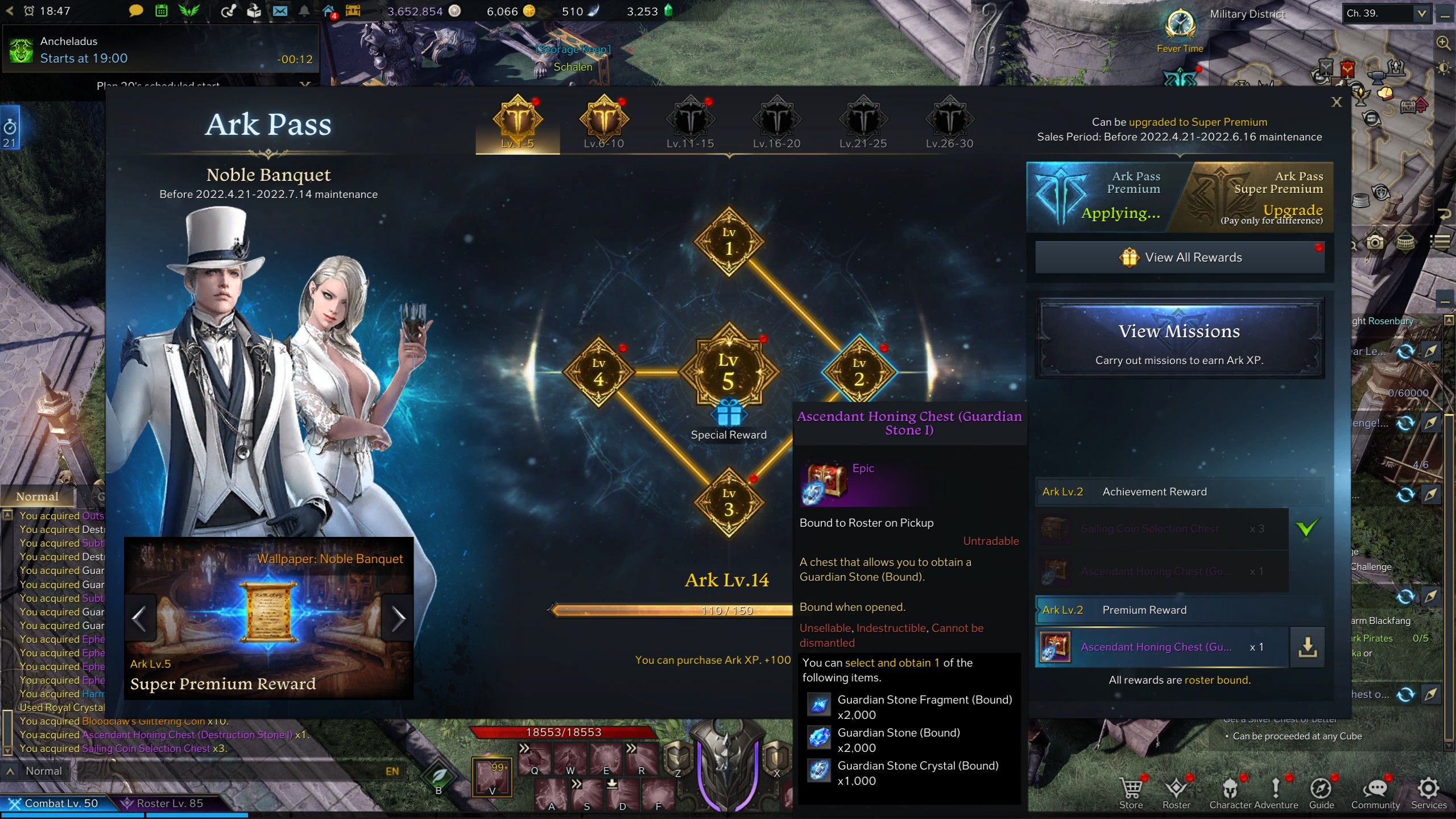 The one downside of the Ark Pass is a matter of optics. Lost Ark still feels like it is still trying to find its footing in NA, and if they had released the Ark Pass with just the free tier or given the free tier with extra bonuses for the first month, it would have been great. The Premium tier is also decently priced for what you get, so it is not an issue of value. But since it launched asking for players to pay for the Premium or Super Premium tiers while there are still ongoing issues, it just feels bad. If all the classes were out and the progression issues were resolved… that would be the time ask me for more money through an optional pass/subscription.

The Super Express Event that runs until July 28th is great on whatever character selected that is in Tier 1 or Tier 2. It is also nice that they have allowed players to switch the character with a later patch if a mistake was made due to the poor initial communication after the April patch dropped concerning what character benefitted the most. I choose a new level 50 Gunlancer, and he has been shooting through Tier 1 into Tier 2. Each time a honing attempt is successful, a piece of gear increases 2 ranks up to rank 10, and your percent of success is always higher until Tier 3. The only downside is that the honing materials gained from completing missions are character bound. Now I have a tone of stuff for Tier 1 that will never get used. It would have been nice if those materials were roster bound. 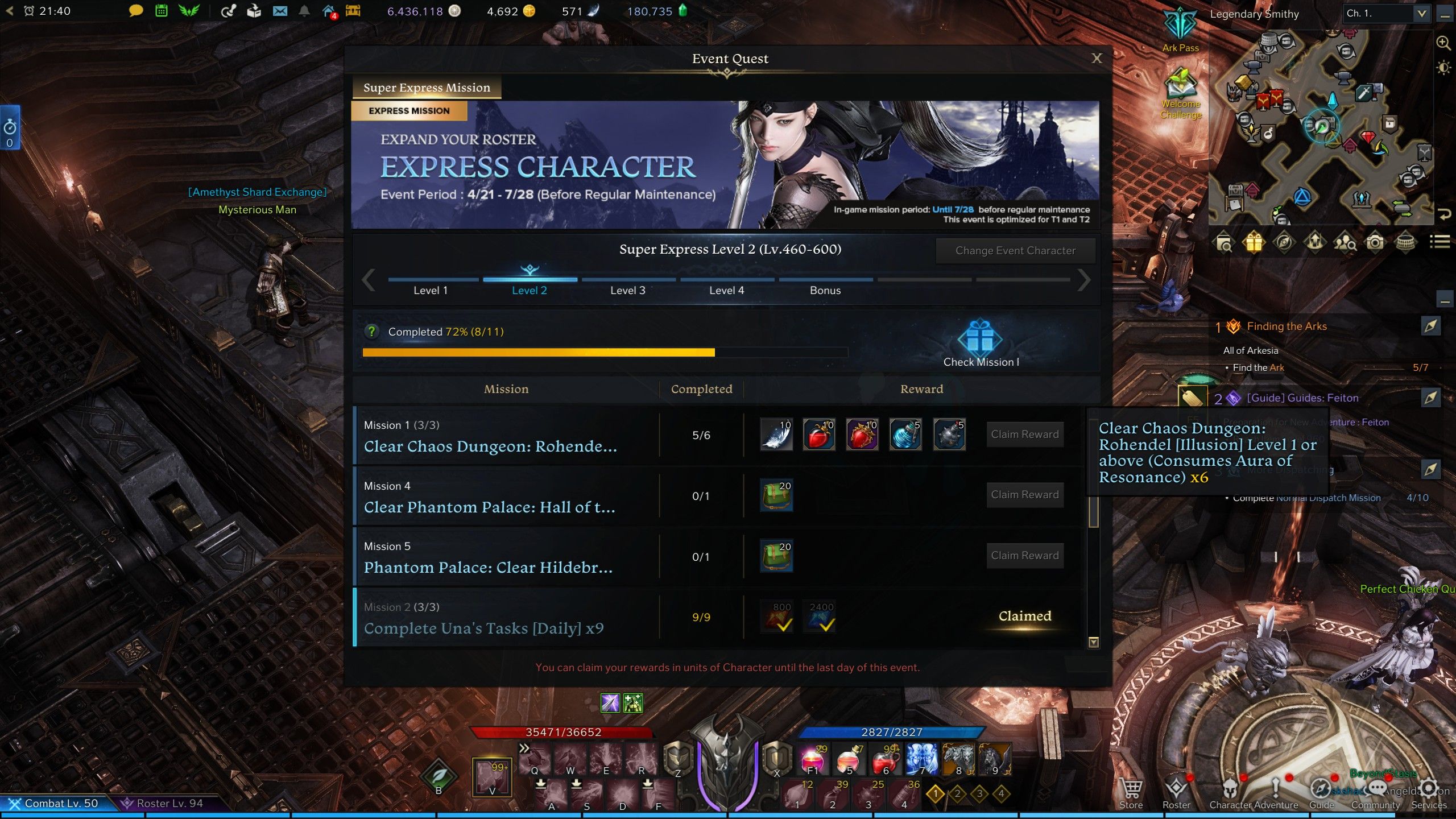 Lost Ark has been a success so far in the NA region. But it has some serious ongoing issues to resolve. Even though Amazon has been working to crack down on bots, they are everywhere during early game content. Occasionally while leveling and during Tier 1 content I could not turn in quests because so many bots were auto pathing through an area. They were either constantly using quest items or engaging with a quest point that created a bottleneck. Typically, I will log off or play another character when this happens.

Other classes are still missing and will only be hopefully released once a month until NA catches up to the other regions. The gender lock on classes is also still an issue, and while I somewhat like the idea of Smilegate eventually releasing opposite gender versions of each class, it does mean that one of those classes will always be superior to the other, even if only in a minor way. 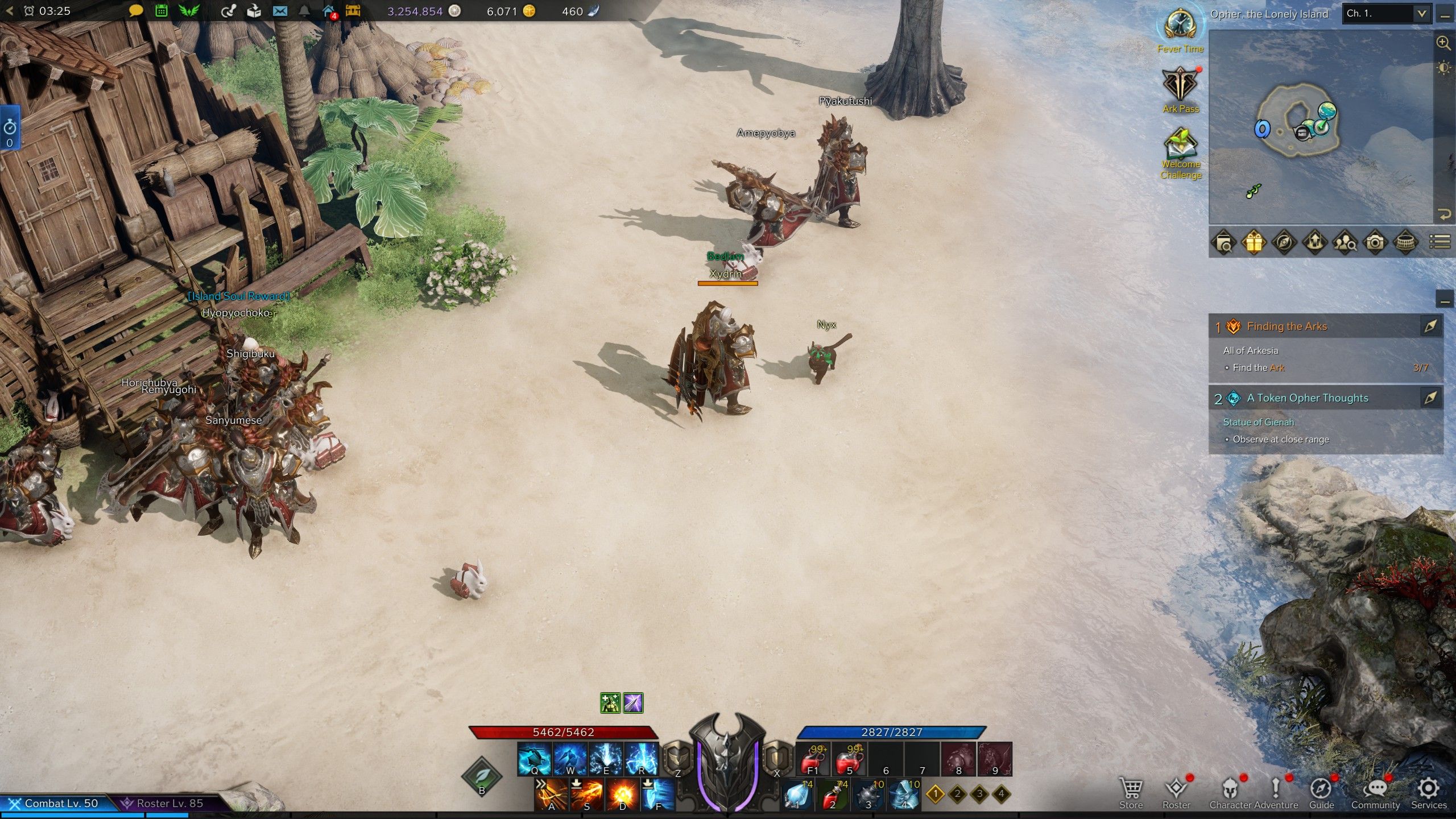 Finally, because this is a Korean MMO the grind is real. Honing gear to increase your item level, in my opinion, feels horrible. Getting a string of failures means you have wasted hours of your day/week, and success simply means you move onto the next tier where the failure rate is higher. There is no actual feeling of genuine reward for the time you have spent. Then my mind immediately goes into a money vs. time comparison, and my free time for the day has now become work.

For a game that is meant to be fun, this is an awful experience, in my opinion, and has brought me close to quitting several times. Just remove the chance of failure and increase the resources needed for each rank. Then at higher ranks include special materials to advance an item even further. If the developers are really set on having a chance of failure in the game, then put it in at the last rank before a new tier so it has a meaningful impact, rank 14 to 15, or alternatively only include failure chance for any ranks beyond 15 on gear.

Even with the current issues, I still think Lost Ark is a great game. Some moments of the main storyline have been amazing to experience, and different island storylines have been interesting/engaging. There have been times when I am really invested in the world of Arkesia. The combat is fun, and ability animations are beautifully executed. According to released statements, Amazon is continuing to work on the issue of bots and progression. Hopefully, with future content patches, they will also be able to take a bit more care with the localization as well.