The original concept for Last Oasis was a nomadic survival experience. The world has stopped spinning. The last humans are confined to a small swatch of habitable land positioned between the scorched ground of eternal daylight and the frozen wastes of the unending night. With a focus on clan-based PvP combat, players would build Walkers, large moveable bases, to roam the land as they battled for supremacy.

With the start of Season 5, the developers of Last Oasis have envisioned a new Oasis. While the PvP battles will remain, portions of the map are now PvE-only, giving solo players a place to call home. I love a good survival game, but I’ve never been a huge PvPer, so this move to a more friendly environment piqued my interest. This isn’t the first time I’ve seen a PvP-focused title try to attract the PvE crowd (or vice versa), and the change doesn’t always work out the way the developers hoped. And considering that the developer already stated that Last Oasis sucks, I can’t say I was surprised when I found my first several hours of Last Oasis Season 5 slightly underwhelming. Underwhelming? OK, it sucks.

As a clan-based PvP survival game, the Walkers prior to Season 5 were a great concept. They gave a clan a mobile base that had to be defended even as they were using it to push into a new area of the world. However, for someone interested in just the new PvE or solo focus of Season 5, the Walkers are nothing more than an expensive pack mule. In Season 5, you now have to build a permanent homestead, and the Walkers are less of a focal point of character progression. You still have to spend excessive resources to make even the smallest Walker more than just a pair of running shoes, and no matter how much you want the freedom to roam the map, you are still tethered to a base. Sure, Walkers provide some extra speed and range, but I could duplicate the results by quickly building a small forward operating base for much fewer resources than it takes to make a Walker.

Speaking of resources, that’s another issue with Season 5. Harvesting resources is an integral part of a survival game, but there has to be a balance. Allowing a player to gather too quickly replaces the survival aspect with a Creative Mode; slowing the process down too much makes everything a tedious chore. Last Oasis, at least in the early game, falls well into the tedious zone. Tools degrade and break too quickly, and crafting itself takes too long. Even with the improved equipment durability, gathering rates, and stamina tweaks implemented in balance patches since the start of the Season, the pacing of harvesting and building is still way off base. The need to gather immense amounts of resources should be reserved for massive projects, not the mundane tasks of creating water and bandages. 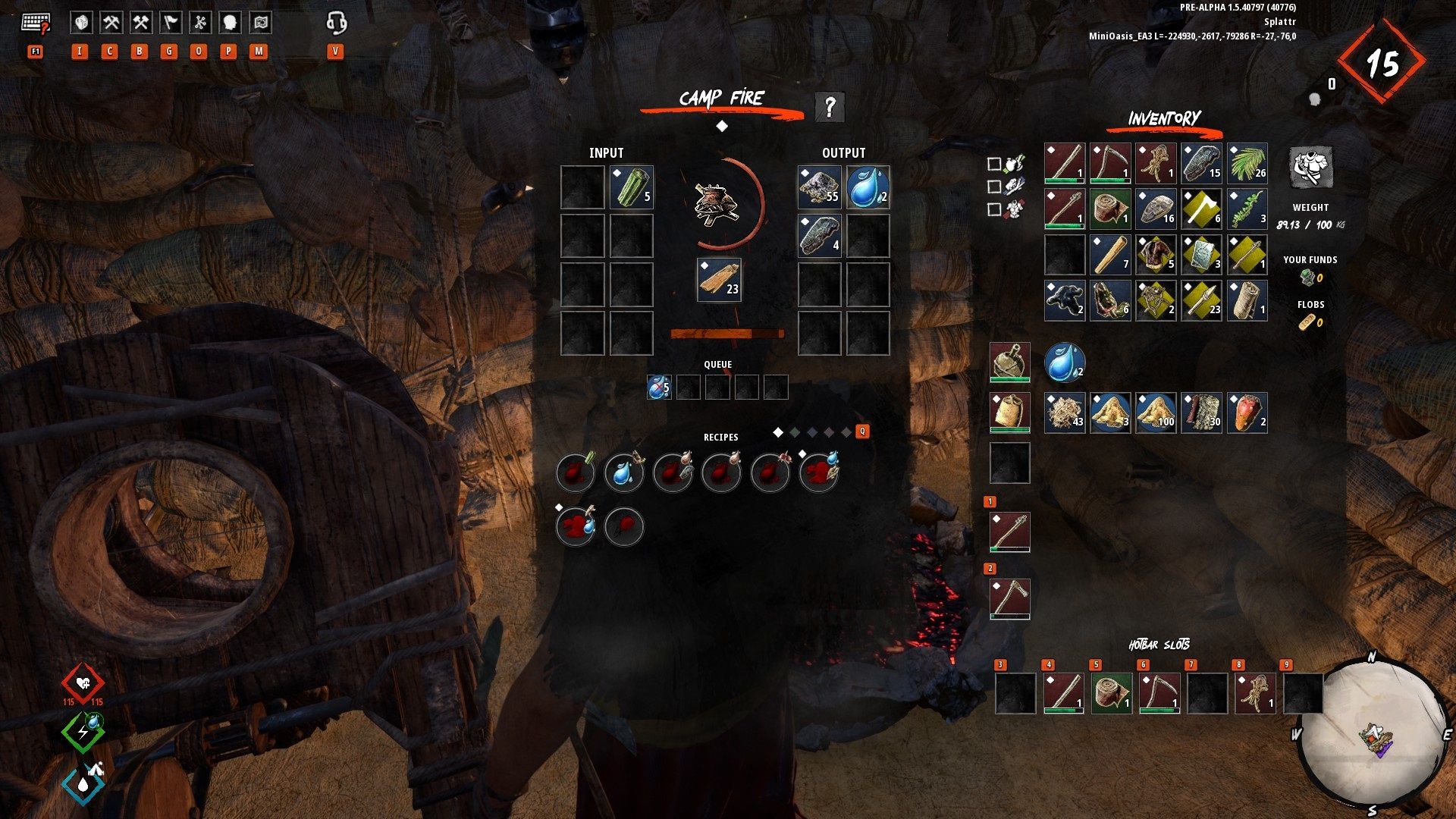 There’s no need to look further than the tutorial to show the negative direction pacing has taken in Season 5. I had never played Last Oasis until just before Season 5 started, so my knowledge of the world was limited to what I had learned in the old tutorial. Previously, the tutorial quickly got you up to speed. You built a few tools, and before you knew it, you had your first Firefly Walker. Sure, you still had plenty of upgrading to do, but your essential Walker base was up and running quickly, giving a new player a sense of accomplishment.

Building a Walker so early also meant that my concept of world scale was skewed. In the new tutorial of Season 5, getting up to speed isn’t as easy. Building your first base isn’t all that hard, but unlike the old tutorial, you don’t have the extra speed of a Walker. You have to hoof it; if you are inexperienced like me, it’s easy to put your base in a poor spot. I put my base near the edge of the map, far away from all the areas I would need to reach if I wanted to gather the necessary schematics and materials to progress. It was a disadvantage that took much too long to overcome, and I could have just as easily given up and moved on to a new game instead of pushing through the pain.

It isn’t just uninformed choices that made my time with Last Oasis painful, though. The early-game combat just isn’t fun. All of the buzz coming out of the Season 5 testing was about how difficult combat was. And yes, the directional-based combat took a minute to get used to, but I would say the difficulty is less about skill and more about a flawed design. Taking on a single AI opponent isn’t all that hard. Block. Swing. Block. Swing. Block. Final blow. Bandage up. Repeat. 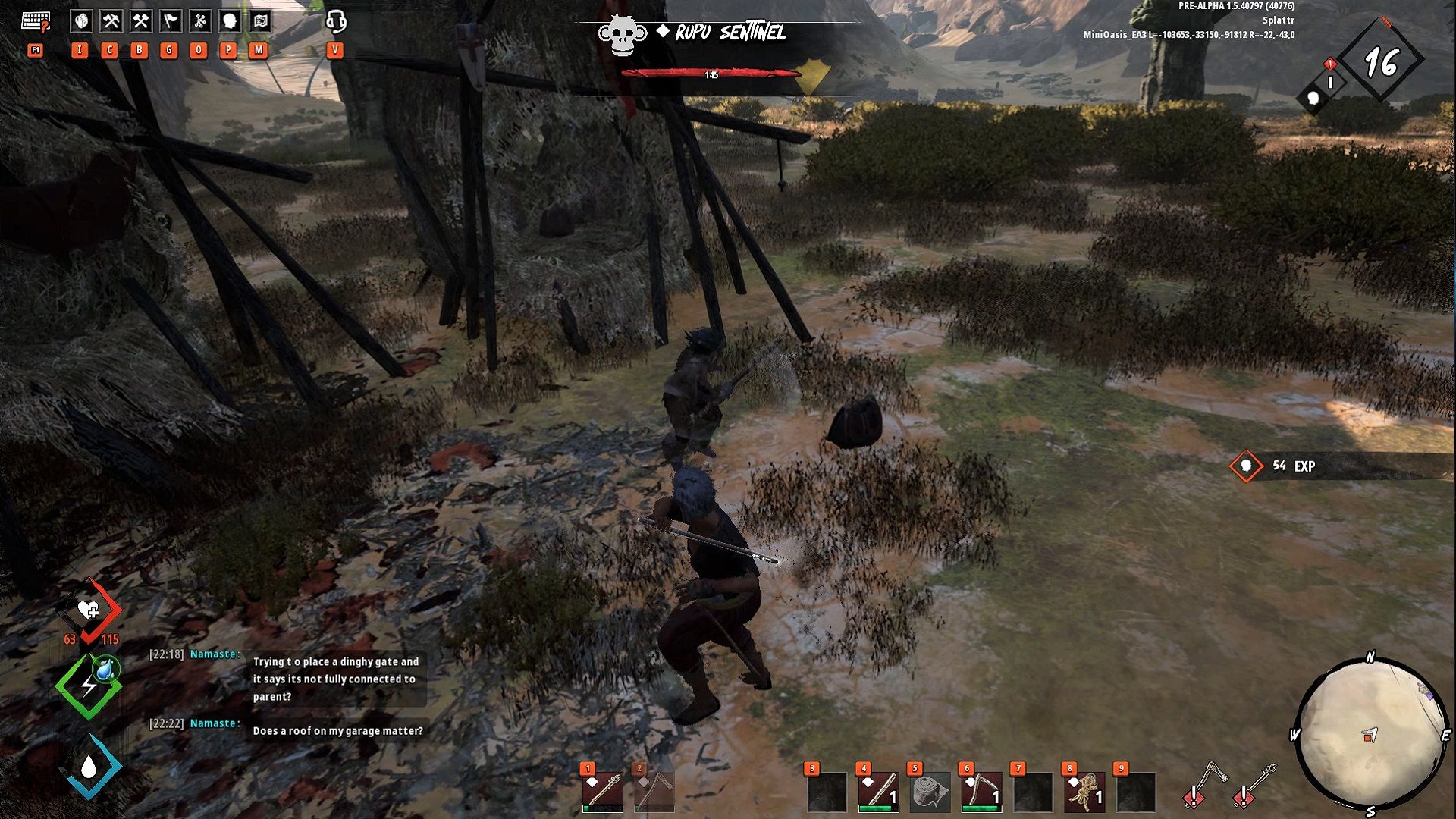 Taking on multiple enemies can be a little more complicated. With some patience, though, you can defeat two, or even three, enemies. Even so, a bad block or two and they can overwhelm you pretty quickly. If only I had a Walker equipped with some weapons, right? Well, the only way to get the schematics you need to build that walking gunship is by, you guessed it, taking on those groups of enemies so you can loot their buildings.

It all boils down to patience, a little skill, a bit of luck, and a bunch of bandages. Bandages that are made with ashes. Ashes that are produced by burning wood in a campfire. Wood gathered by cutting down trees with axes that break way too quickly. Axes that are made with…oh my god, just let me fight already!