Long dreaded and much awaited have been the release of submarines into the tech tree in World of Warships. The torpedo-flinging submersibles have been a point of controversy in the community since they were announced three years ago. For years Wargaming has been attempting to balance the ships that can't be seen. Let’s take a “deep dive” and see how submarines fare in World of Warships.

First things first, submarines aren’t just added to your arsenal. Instead, you’ll need to unlock access to the new ship types.. For context, whenever Wargaming introduces a new line of ships, they will privately beta test the ships, then the ships will be released into early access, where they can be purchased with seasonal currency via the armory. When the next update rolls out, they are released into the tech tree, where they can be researched and purchased normally.

Submarines are a special case. Originally slated to release in 2020, they were delayed due to balancing issues, as well as the real-life issues caused by the pandemic. In 2021 they were locked behind challenges, in which players could gain access to them for two weeks. Now, like any other ship line in World of Warships they are released for early access purchase in the armory. Next update they will be available in the tech tree like any other ship. 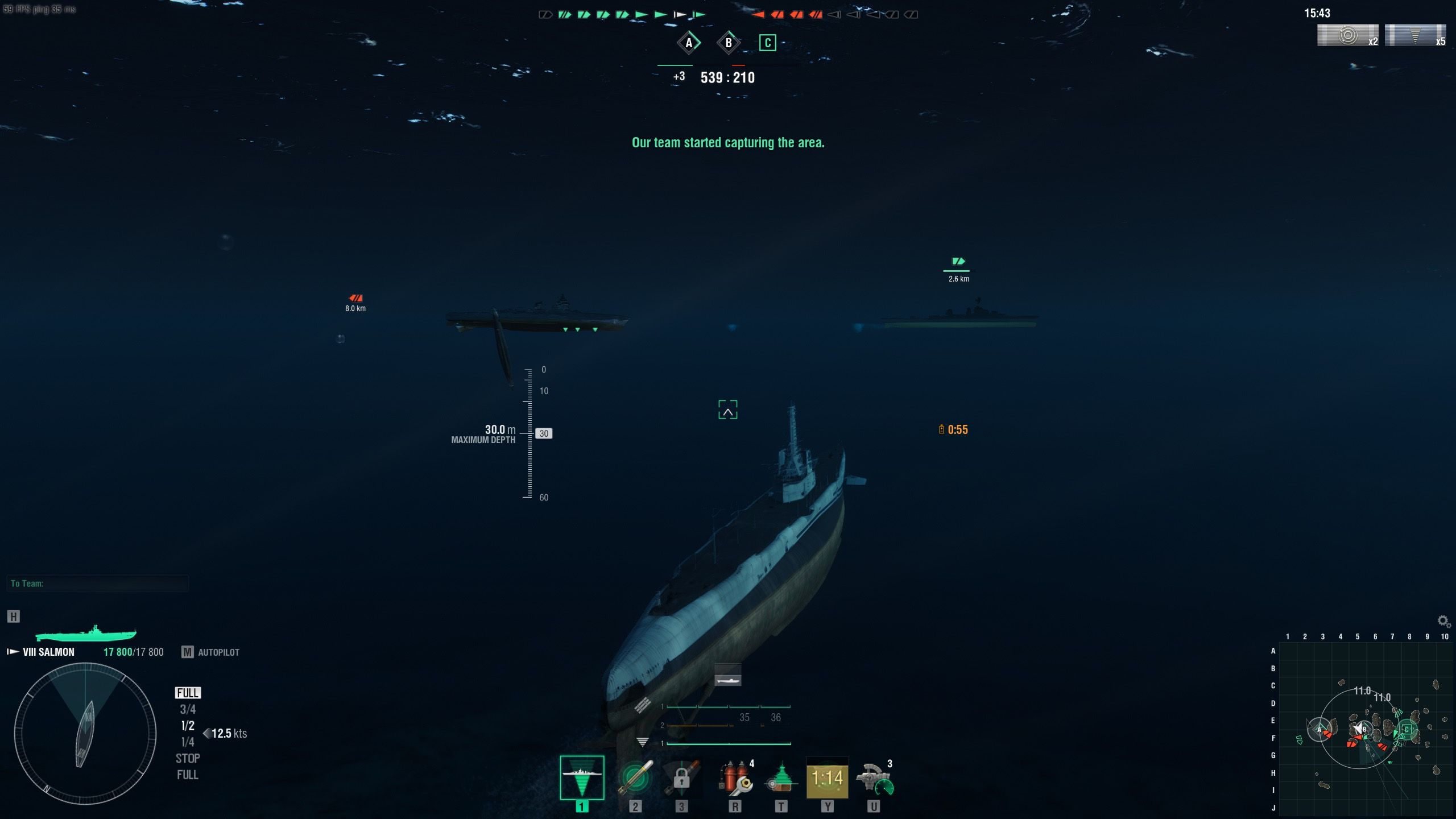 Currently the grind to get a single submarine is excruciatingly slow, however, there are no special challenges needed to unlock the submarines. All you need to do to unlock a submarine in Warships is earn ribbons with tier V or greater ships of any nation. This isn't that bad as ribbons are earned by doing anything in a match (spotting, making hits, capturing an objective, etc.). The grindy slowness comes in because you only earn a small amount of the seasonal currency required to purchase these submarines for each ribbon milestone you hit. If you don't have a lot of tier V or higher ships, earning a submarine will be nye-impossible.

Once you actually get your hands on a submarine, it takes one hell of a playstyle adjustment to get used to them. They are slow, their maneuvering is not as bad as the Netherlands cruisers, but is closer to a cruiser than a destroyer. Submarines are not tanky, as their health pool isn't large, but because it is rather difficult to make hits on a player in a sub, they are quite survivable. The drawback to that survivability is that when you get hit in a submarine you are almost always incapacitated. Most of the time when I got hit, I was able to move, but I had a fuel leak, my sonar was down, my torpedo tubes were disabled, as well as the inevitable flooding.

In comparison to other playstyles, getting hit feels like a battleship versus a destroyer, maneuvering feels like most cruisers, and making hits on other targets feels like nothing else in the game. To connect with another target in a submarine, you need to first ping your target by firing a sonar pulse at them. Sonar travels in a straight line and when a ping hits the hull of an enemy ship it highlights a section of their hull. Once you have pinged an enemy hull you can launch your homing torpedoes.

Except it's not quite that simple. Your torpedo pods cover about a 30-degree arc on the front and back of the boat. Seeing as captains must still provide a lead on their target you have to maneuver to be facing your target, or be facing directly opposite of your target. Also, you can't stay under forever, after 3-4 minutes of being underwater, you need to resurface to recharge the submarine’s “dive battery”. Further, your battery is depleted twice as fast if you are detected.

Generally speaking, in a match, I would get close enough to an objective to spot enemy destroyers or be spotted myself, then dive to 30m below. From there I would try to target destroyers first as they are the most likely to ruin my day. The submarine only moves at about 15 knots when underwater, meaning I had about 10km of range between me and my target before they were on top of me.

Destroyers usually go down in two hits, but maneuvering to make consistent hits on them is no easy task as they can outmaneuver your torpedoes. Even with their slow maneuverability in mind, battleships are the hardest to sink in a submarine. Even if I managed to connect all four torpedoes in a pod, I would have to turn around to fire more because it would usually take six to eight hits to even sink a battleship. Commonly cruisers are good targets because they have neither the survivability or maneuverability to withstand a salvo of torpedoes.

To better understand how slow submarine gameplay is, in a given match I can usually average between 60-100k damage. My average with submarines was 30k. Even in super aggressive pushing matches the most damage I managed to deal was 62k. This is a significantly lower average than most Destroyers, Cruisers or Battleships. The submarine playstyle is unique and can be fun, but is certainly a challenge to master. 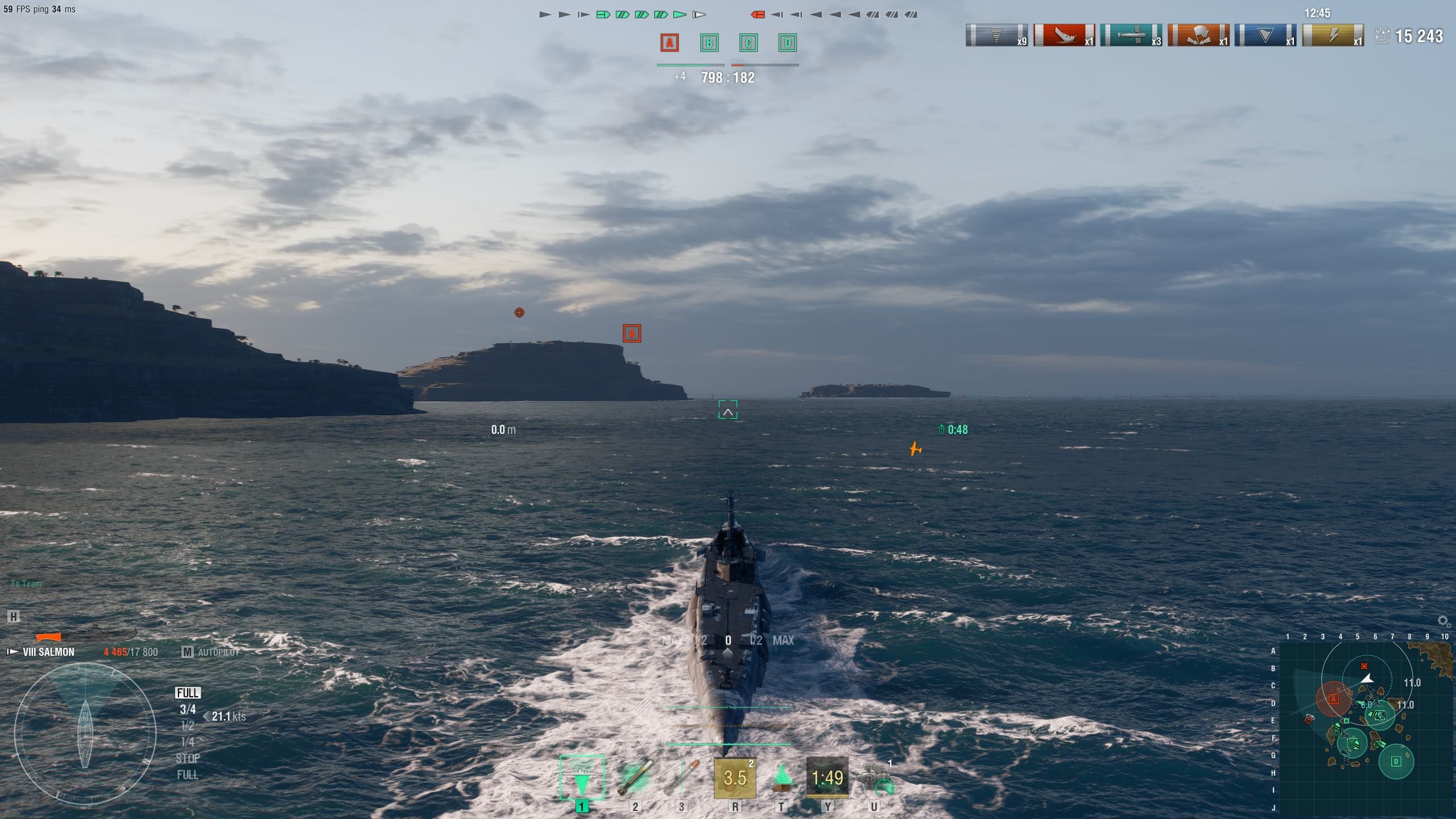 On the flipside, submarines are really annoying to deal with as a battleship, aircraft carriers, or cruisers. You can't see your enemy, so there is no consistent way to fight them. This often leaves matches where the entire enemy team is dead, except for one submarine, meaning the entire team is forced to scour the map with a hydroacoustic search to find the submarine. Once you actually have found the submarine you are forced to either wait on it to surface so you can fire on it, or use depth charges and pray the submarine doesn't move out of its impact zone.

The annoyance is furthered in regard to the damage control party. When you are hit with a sonar ping, it will stay with your ship and continue to be a homing beacon for enemy homing torpedoes until the sonar ping is cleared. The ping is cleared after a period of time automatically, usually in 30-45 seconds. But, you can also clear pings with the damage control party. So, this gives every surface ship player a choice when they are in the middle of a brawl with a surface ship and get hit by a sonar ping.

Submarines are not annoying when playing as a destroyer. Because of the high maneuverability of destroyers, even while your ship has an active sonar ping, you can outmaneuver homing torpedoes. More fun, because destroyers fire rates are high, and optimal armor penetration is low, when a submarine is forced to surface, destroyers have an easy and farmable target. As a destroyer, submarines are fun to kill, as any other ship, submarines are a pain in the stern.

As always, the art department at Wargaming knocked the modeling of the submarines out of the park. They look real, and the water flowing in and around them looks good. The real gem is the fact that the entire bottom of each map is now visible, it feels dark, grimey, and grim. It is especially cool to see ships that you've sunk sink all the way to the ocean floor.

The submarine update shakes up the waters in World of Warships in an interesting way. They are a challenge to deal with, but if players are skilled enough to deal with one, they are an easy kill. New content for games is always good, but because submarines move slowly, and discourage pushing up towards the enemy, It's not entirely a welcome addition to Warships. Overall, playing as a submarine feels slow, and playing as a surface boat feels slower, but admittedly more skillful than before the update. Though the update increases the skill ceiling of the game, gameplay is sometimes slow and annoying. Overall, the update 11.9.0 is a weary one to World of Warships.