Dwarves. Not the Firstborn, or the Secondborn of Illuvatar, but rather the red-headed stepchildren of Middle-earth. This is a race that, admittedly, I haven't spent too much time thinking about in the fourteen years I've run around The Lord of the Rings Online. But prepping for Fate of Gundabad has made me quite upset I've slept on the wonderful stories Standing Stone Games has written for this solemn race.

For the last few years, The Lord of the Rings Online has been telling stories outside of the major, overarching story of the Third Age. Sauron has been defeated, the Ring destroyed, and now come the days of the King in Gondor. Yet evil didn't just cease to be because the Big Bad was gone. The story eventually takes us back to the North where the Dwarves of Durin are longing for their ancestral home. Gundabad.

This is a theme that permeates all Dwarvish culture in The Lord of the Rings. While the Elves long for the Sea, called to the Blessed Realm by the sounds of Ulmo's music, the Dwarves long for their ancient halls. Khazad-dum has been re-entered, though the time is not yet right for the Dwarves to reclaim the Dwarrowdelf. Prince Durin, named for the Durins that have come before him, longs to lead the Longbeards back to the halls of Mountain-home, Gundabad, in the northern Misty Mountains.

The Dwarvish strongholds of Belegost and Nogrod are long gone, under the sea, yet Gundabad holds a special place in the heart of the Dwarves themselves: it was where Durin and the Fathers of the Dwarves first awoke. (Read The Silmarillion to learn that whole story - it's rather interesting!).

I'll admit: I've always gravitated towards Elves and Men in The Lord of the Rings Online. I do have a Hobbit as well, but most of my characters are just variations on a theme, and that theme is what Noldorin can I make this time?

But rediscovering the great race that Tolkien created through the works of Standing Stone Games lately has been a treat. Unlike the movies of Peter Jackson, SSG is treating the Dwarves not a comedic relief, but as the tragic and solemn race they are - but one full of fire, grit and hope. The fact that we also see that the various tribes of Dwarves, from the Stout Axes to the traditionally thought of Longbeards, working together - yet not in harmony - helps to sell how complex Dwarvish society truly can be. 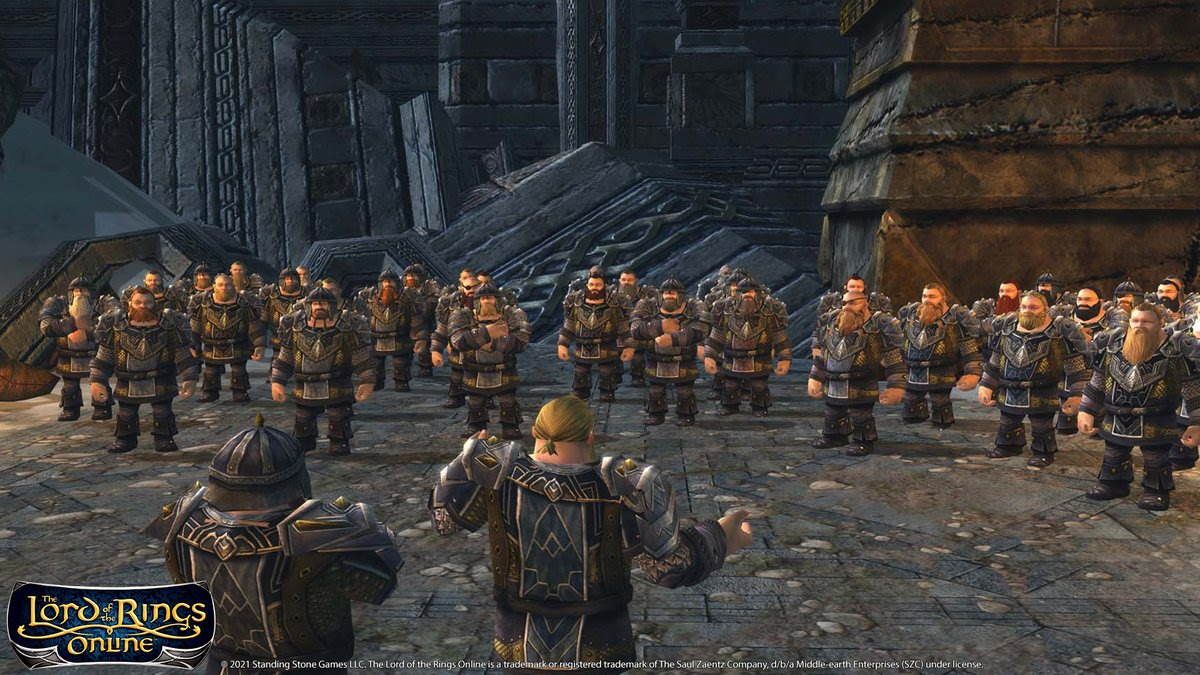 Durin, simply because he holds the same name as Durin the Deathless, doesn't command all of the Dwarves on that fact. What we're witnessing leading from Skarhald in the Grey Mountains all the way to the gates of Gundabad in Elderslade is the Prince winning over the various Dwarvish tribes - and learning what makes them all tick. Prince Durin himself is an interesting character as he tries to live up to the namesake and the doom laid upon him by the destiny his name gives him - yet all the while deal with the same doubts and issues we would have in his situation.

Gloin is also an interesting companion here. We're all more familiar with his son, Gimli, from the Fellowship, but Gloin has been no stranger to the player character. Using a character with the history he has within the books, tied to both The Hobbit and The Lord of the Rings proper is smart on SSG's part as it helps to ground the story in the world around me. I feel like this is just a natural continuation of the Third Age into the Fourth thanks to a familiar face tagging along for the ride.

I'm not quite caught up to The Blood of Azog interlude and eventually knocking on the doors of Gundabad myself just yet, but the more I play the more I'm kicking myself for not questing with a Dwarf, as well as picking up these quests sooner. The Lord of the Rings Online has always told amazing stories that feel like they could live natively in this world, so I'm not sure why it took me this long to get interested in the Dwarvish struggles in Northern Middle-earth, but I'm happy to finally be adventuring with Imak, Venko, Durin and Gloin as we strive to take back Mountain-home from the Orcs this month.