When Genshin Impact launched in 2020, developer MiHoYo expected the game to succeed in China, Southeast Asia, Korea, and other East core markets. But the game broke all expectations, and the Chinese free-to-play mobile game managed to catch the attention of over 10 million players in a matter of weeks. Additionally, in a span of just a few months, MiHoYo became a household name in China, with the developer pulling an estimated $175 million in revenue a month.

MiHoYo’s Success Formula Can Be Replicated

Despite MiHoYo having its roots in mobile gaming, it made Genshin a grand success on PC. With a lovable cast of characters and a budget to back up the stunning anime-style visuals, you could easily be forgiven for thinking the game was from a AAA studio.

MiHoYo’s three founders, Cai Haoyu, Liu Wei, and Luo Yuhao’s love for anime led to the company being formed, and their vision has helped cater to fans of open-world RPG fans globally.

But at its core, Genshin Impact is a casual game that you hop into, play for a while, and log off. The Resin system restricts you from doing certain activities and collecting rewards from them.

You get 160 Resin for free, and once you are out of the currency, you cannot earn loot to level up your characters or weapons. You can enjoy combat, exploration, story quests, and events with no restrictions whatsoever, but it is still not a game where you can spend hours every day.

However, one game that can solve the problem of time-gated content while also checking all of the boxes that Genshin does is Blue Protocol. Bandai Namco’s upcoming free-to-play MMORPG might be the next big thing among anime fans and hardcore MMORPG enthusiasts. With a Japanese release imminent, Bandai Namco has also promised a Western release sometime in the future.

Korean developer Smilegate revealed that it had finalized discussions to distribute Blue Protocol in Korea. The game is also confirmed for Taiwan, Hong Kong, and Macau. But we do not have an official release date, and Bandai Namco has kept the project under wraps for now. 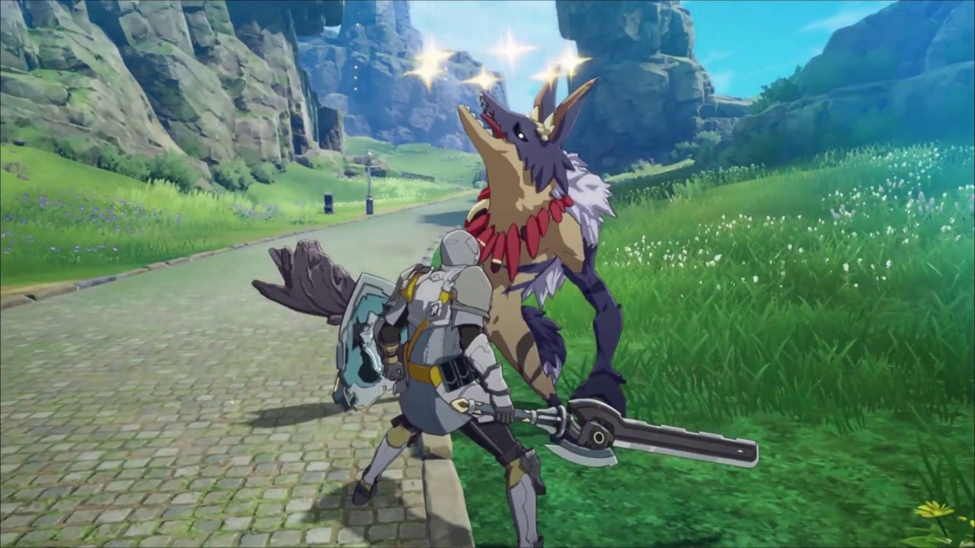 With anime becoming a cultural phenomenon, the market for anime-style games is bigger than ever. But most of the titles we have received over the years have been paid experiences. From Persona 5 to Code: Vein, accessibility to anime RPGs has become an issue for players who do not have $60 to pay upfront for a single game.

Blue Protocol seeks to offer a fully free-to-play experience which is one of the factors that drove Genshin into the spotlight. The “gacha” aspect of Genshin Impact is a feature, of which many in the gaming community disapprove. Getting characters in Genshin Impact is, simply put, no different from getting loot boxes.

Being a full-fledged MMO, Bandai Namco’s upcoming title will be fully monetized by a battle pass system and limited items. This model is a lot more approachable for players who want to support the game, while not feeling their progress is tied to luck. The developers have confirmed that there will be no monthly subscription at launch, which is one of the reasons players might hesitate to try out an MMORPG initially.

Interestingly, Blue Protocol will offer a PVE experience with no plans for PVP, at least at launch. This is a missed opportunity, but it could be added to the MMO by Bandai Namco in the future. Not being able to test your builds against other players or trying out new characters is a lot of fun, and it is one of the most charming aspects of other MMOs on the market, such as World of Warcraft.

Blue Protocol had its first closed alpha back in 2019, and the gameplay looked rock solid. Some activities allow players to form a team and experience dungeons, arenas, open-world, and more. The element system in Genshin Impact makes the combat so engaging, and Blue Protocol has its own take on elemental damage.

You have a host of elements and weapon types and the main storyline to make you feel a part of the entire Blue Protocol Journey. All of Blue Protocol’s cutscenes are stylized, and its anime-style artwork will get you hooked in no time.

Blue Protocol also replicates Genshin’s simplicity without taking away from a traditional MMO experience. The user interface is simple, and you get used to the combat in no time. One of the ways Blue Protocol improves on Genshin’s combat system is with its world bosses. In Genshin, you do not get to fight the world bosses without heading into specific locations. And you fight them only if you need their materials. Blue Protocol randomizes this system, and you can encounter a world boss during a simple exploration quest and find yourself strategizing to take down your tough opponent.

Unlike Genshin’s resin system, which prevents you from playing the game as much as you want, there are no limitations, and you get to experience Blue Protocol to its fullest whenever you want. The game manages to merge some of the best aspects of open-world RPGs while offering something to MMO fans.

Should You Try Blue Protocol As A Genshin Impact Fan?

Blue Protocol could be a fun experience for Genshin players who wish to have a more hardcore experience. Bandai Namco’s MMO is far from perfect, though. Players who participated in the betas have complained about how fetch quests can be ambiguous, and inventory management needs serious reworks.

As a Genshin player, if you love combining abilities and elements, taking on bosses, and wished that Impact offered a source of endless repeatable content, Blue Protocol might be for you. It definitely looks promising, and if you are looking for the next big anime RPG title, Blue Protocol might scratch that itch.

Bandai Namco has been quiet about a release date in Japan, but it is expected to launch sometime this year. A Western release might be some time away, but once it does open doors to the English-speaking audience, it just might be the next big anime RPG everyone talks about.