H1Z1 is a game that previously dealt with human versus zombies but no more, the game has made its move to PlayStation 4 and joined in on the battle royale fanfare. You will be thrown into a world of hunting for weapons and armor, and more importantly other humans. You will be able to get around the map in several different ways and lots more in this new release on PlayStation 4. This is our review of H1Z1.

I'm the resident Battle Royale fan here, being the guy on the team who adores PUBG over Fortnite still. Right from the beginning, you will notice some key difference from other battle royale games. After you join a game and finish waiting with everyone to get the party started, you will be randomly dropped somewhere in the world. What?! No plane to sit in while we are choosing where to go? No Party bus with epic music? In H1Z1, the people over at Daybreak Games decided that they wanted this game to go faster. What did they do to make this happen though? They have your character randomly drop into the world and you are plunging from the get-go. Your parachute will carry you quite a way before you hit the ground, so make this flight count.

You remember all the waiting while you are looting, for players, for the circle? Well in this game the circles close a lot faster and you have to be ever vigilant so that you don’t get circle slapped. The map isn’t super huger so it makes it a little easier to find people to go after as well. The guns are similar to the other games but there are differences there too. There are different submachine guns, and some different rifles as well. H1Z1 is the super-streamlined PUBG, and it works really well as that.

Along with the different guns comes a bit different gun system. When you pick up the weapons you can choose between a couple different mains and a secondary by way of a radial weapon display. The damage and bullet action for the game looks a bit stiff and cartoonish as well if you watch it close enough. After you finally kill someone with this new system you will notice the body remains where it died, when you walk up to loot the body everything is thrown up in the air and spreads out on the ground so you can pick it up. Another difference with this game from Pubg or Fortnite is that when you kill someone in a vehicle.

Some things that make this game fun are the vehicles in general. You get to drive four-wheelers and you get to drive police cars. Now I know PUBG just got the muscle car on Miramar, but I love driving around in a police car with the siren going. I have been stealing police cars since Grand Theft Auto 2. The opportunity to drive one around while trying to get the win is pretty cool for me. 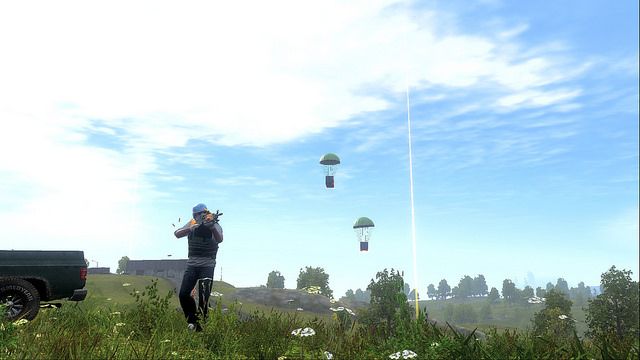 The in-game graphics aren’t too bad either in my opinion. The ol' Forgelight engine makes things seem like they may not be as good as PUBG or Fortnite's artistic stlyings in UE4 because the map is gray and dreary in keeping with the zombie setting. They are still better than some games though as far as vehicles and houses, and character models are concerned. When you are driving around the map there is hardly any discernable change in the landscape, like delays in loading or anything like that. It gives you a good sense of size and distance as you approach houses or people from far away.

Note: Our copy was reviewed on PlayStation 4 with a beta code provided by PR.