Today marks the release of Guild Wars 2’s fourth episode of the Icebrood Saga, Jormag Rising, which expands Drizzlewood Coast and adds some new, dangerous events. Drizzlewood Coast was originally released with the third episodes release, No Quarter, which introduced the premise of siege warfare, which previously only resided in WvWvW, to a PvE map. In Jormag Rising, ArenaNet doubles down on that premise.

For those that may not have followed the Icebrood Saga’s story up to this point, here a short backstory into how we’ve gotten where we are. Generally speaking, we are helping the United Legions of Charr, as they press forward in their attempt to secure the southern portion of Drizzlewood Coast from the Dominion forces. As I’m not a horrible, yet gorgeously bearded, story spoiler, I will abstain from any narrative impairments to the best of my ability, and focus primarily on the additions prevalent in the newest episode. These new features come in the form of an expanded mastery tree, new armor and weapons skins, an expansive map with its own meta-event(s), and plenty of little secrets hidden for you explorer-types. 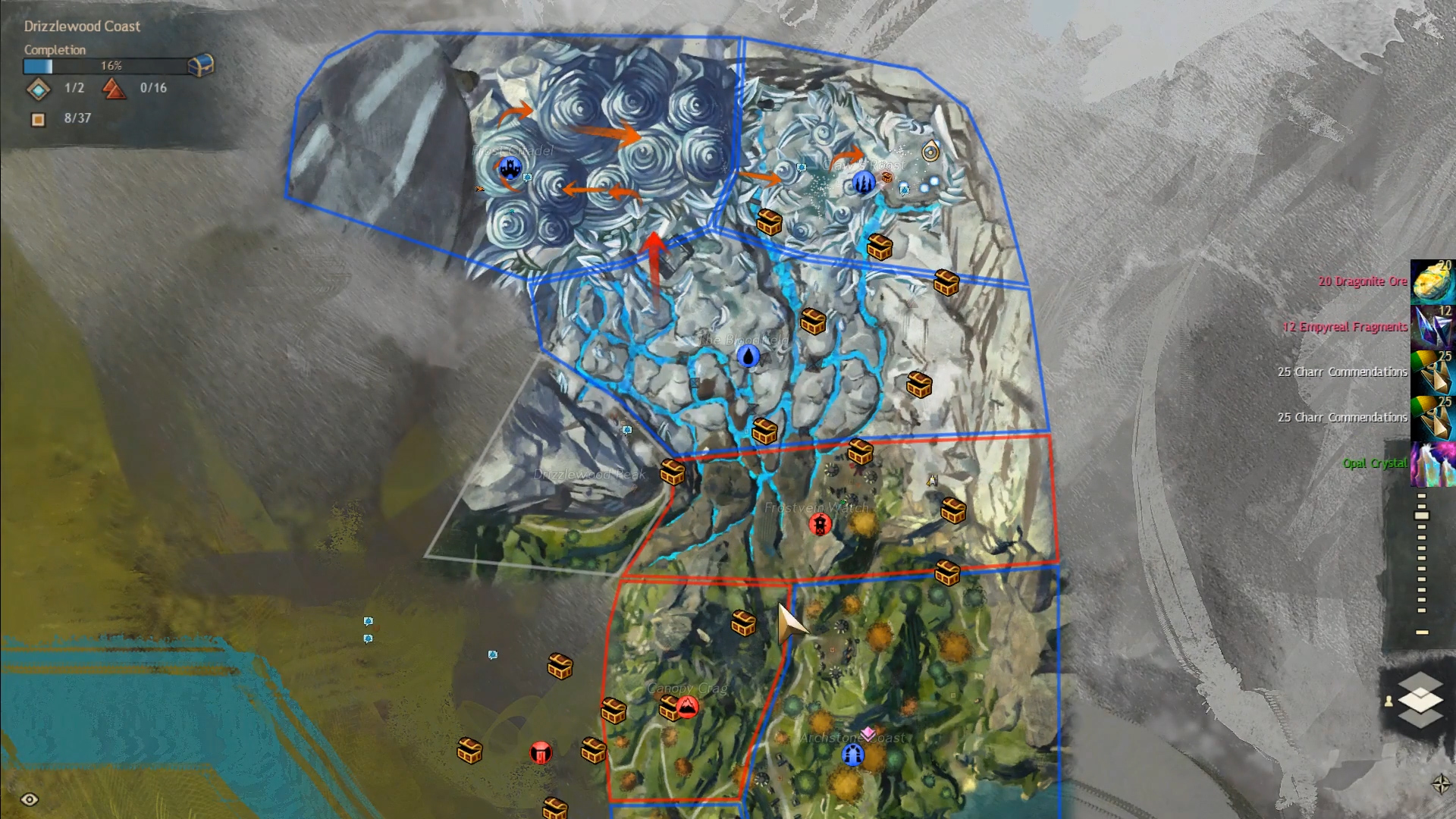 Story aside, the meat and potatoes, otherwise known as the lasting content, will likely reside in the meta-event, which is only triggered when the Drizzlewood Coast’s southern meta-event has been completed. As you may be aware if you have made your way to Drizzlewood Coast, the current meta-event is time consuming, so the developers have opted to decrease the time investment required to bridge that gap. This will allow players to complete events faster in the south so they can kill that pesky Vishen Steelshot, and then venture forth, into the north. Both meta-events are aimed to take the same amount of time as the current Episode 3 meta takes pre-Episode 4.

The northern side of Drizzlewood coast was designed to be more difficult than the southern side, which makes sense, as it is considered “enemy territory”. The meta begins with your team crossing a bridge manned (or charred?) by several enemies. As you fight your way through to opposition-controlled outposts, you have to raze them to the ground to get their Tribune to appear. Some of the structures can only be harmed by siege weaponry, while in some other cases, siege weaponry may be helpful to assist in moving some battles along more quickly. 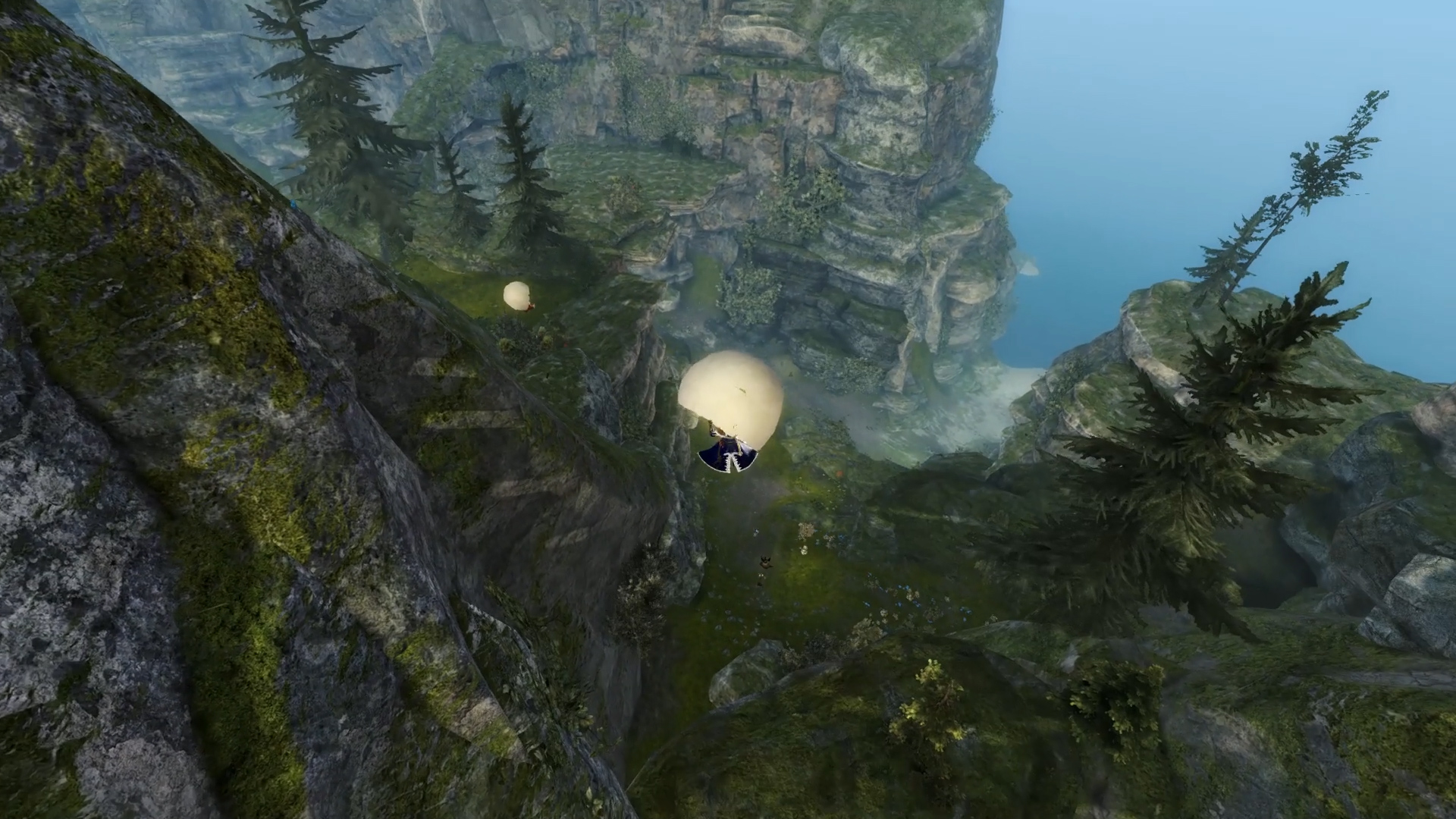 The new mastery additions were designed with this in mind. The United Waystation Synchronization Mastery in Episode 3 only had a total of 3 potential tiers that you could unlock. In Jormag Rising, you can expand that to 6, adding the Iron Legion Medizooka, the Ash Legion Mount Stealth, and the United Legions Waystation Mastery. A United Legions Waystation lets players exchange War Supplies for powerful abilities. The new ability, the Medizooka is a strange mix of an aerial glider, and an AOE healing pulse. Using it will launch players into the air where they can fire healing blasts down at their allies below, along with some limited damaging abilities. The parachute has the same mechanics as the glider, and can utilize updrafts and ley lines to stay afloat.

The additional stealth mastery for mounts will no doubt be the most coveted mastery rank to achieve, especially when it comes to traversing the northern half of Drizzlewood Coast, as nobody wants to be outnumbered on the wrong side of enemy lines. The final mastery for the United Legions Waystation Synchronization line increases the power of all available weapons, and those weapons can be used in any open-world situation (not WvW, Fractals, Dungeons, etc.). 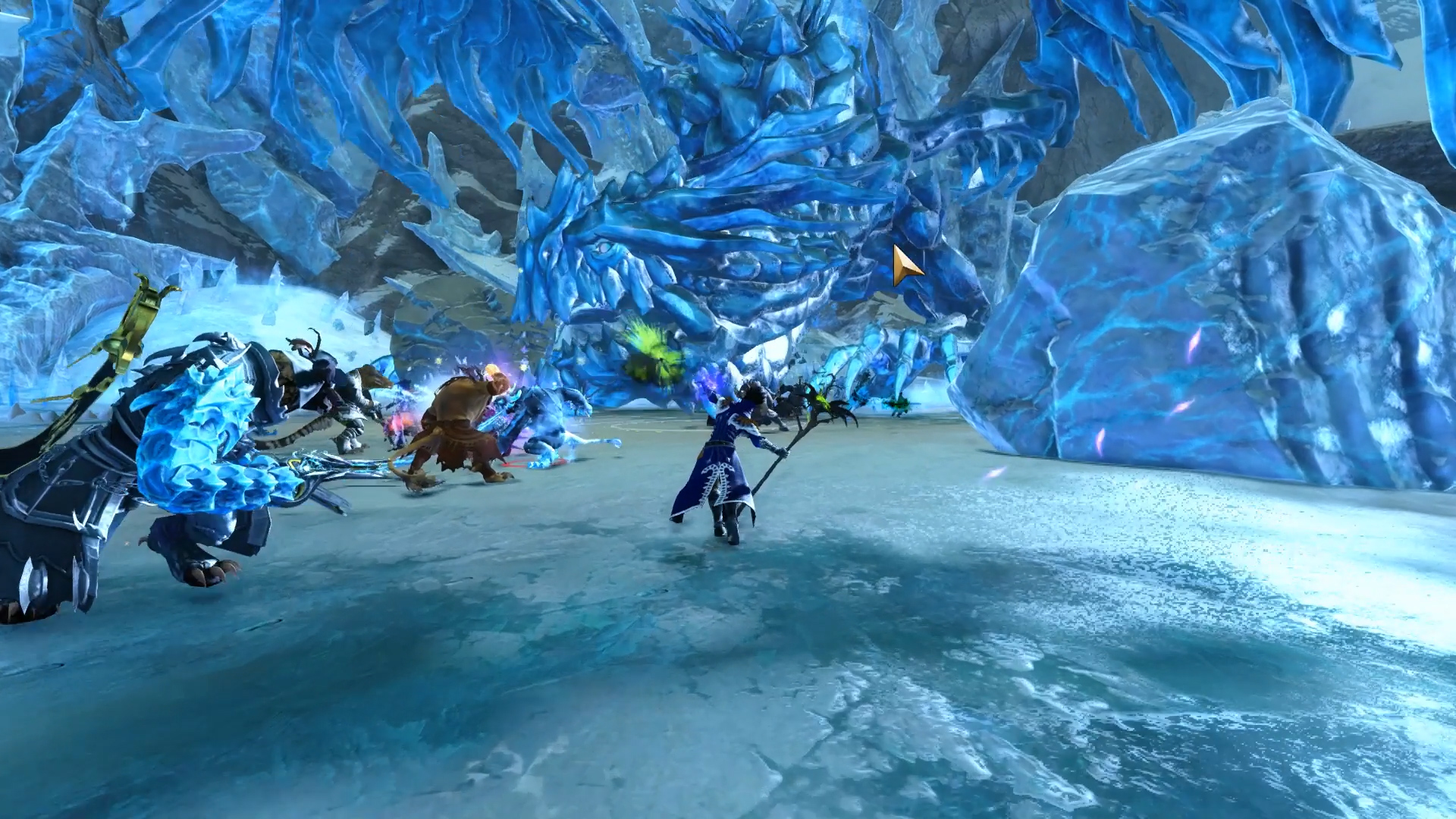 Once your map has successfully defeated the Tribunes, you can assault the Frost Citadel where you will defeat guardian elementals, siege some doors and defeat a roving tank. The siege and environmental related gameplay will play well in large groups and to those that favor a variety of tactics to complete events. It all culminates into a feeling of peril in ways that other meta-events seldom do. Once the Frost Citadel falls, your final battle of the event revolves around defeating the Claw of Jormag.

By defeating the meta-event(s), you can get a ton of rewards, both post-meta and during the event as you go. The Dominion Tribune weapons for example, are earned as you fight and defeat each Tribune. The unique weapon skins are themed after each branch of the five Charr legions: Iron, Blood, Flame, Ash and the newly introduced, Frost legion. ArenaNet has also added upgraded versions of other weapons already in the game, such as the Charged Stormcaller set and the Empowered Boneskinner sets, both of which require prerequisites so that you can craft the enhanced versions of them. 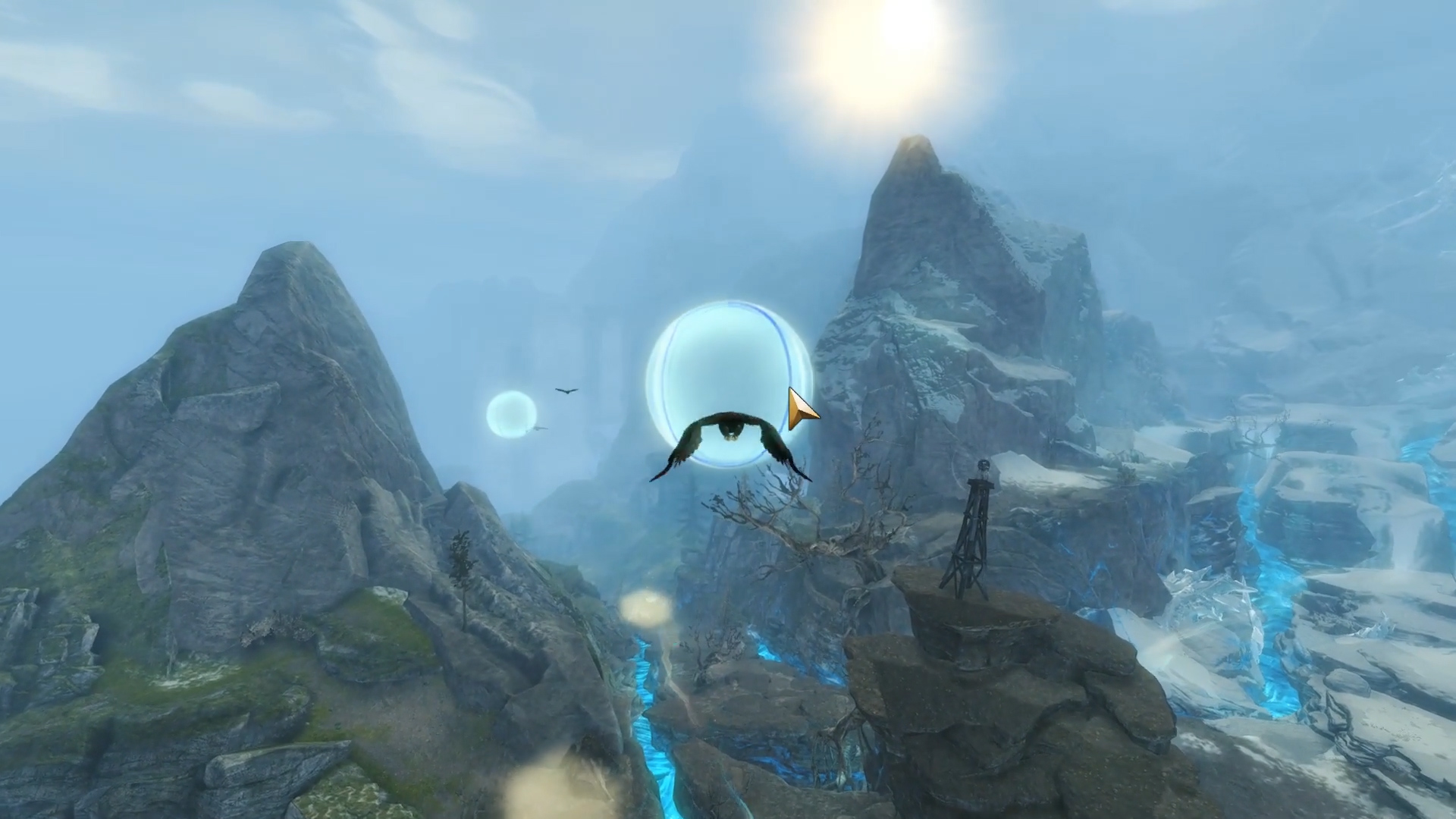 Lastly, if you’ve ever wanted take on the aspect of a Spirit of the Wild, you’re in luck. In Episode 4, you will be able to find three different statues that will transform you into either an eagle, an ox, or a wolverine, each with their own adventure to undertake. While I haven’t personally ever felt the itch to become a Spirit of the Wild, the time trial I had the chance to test was a neat diversion. If handled properly, these mini-games could turn into a big draw in the future, but right now they feel mostly like a detour if you have nothing to do after the meta-event.

In no way is this a complete list of everything that’s being added in Guild Wars 2: Jormag Rising, but as an outline for what players can expect, it might just be worth it to log in and experience the new meta-event, especially if you haven’t logged in for the Episode 3 content yet. Due to the way Drizzlewood Coast is laid out, logging in for Season 4 will also give you access to the southern portion of Drizzlewood Coast, even if the story portion will still be locked. As for the greater PvE players at large, the emergent WvW-esque gameplay may save you from tossing those unwanted siege blueprints you’ve been reluctantly storing in your bank. Use’em if you got’em in Drizzlewood Coast.