Starting this week, everyone who has a Guild Wars 2 account has access to try three of the new elite specs coming with the End of Dragons expansion: Harbinger (Necromancer), Willbender (Guardian), and Virtuoso (Mesmer). Characters with these elite specs can be created by using one of three beta character creation slots added to each account. At creation, these beta characters are level 80, have all elite specs unlocked, and will have access to any masteries you have unlocked on your account. The testing week will end on August 21st at 10:00 pm PDT (UTC -8).

I’m delighted ArenaNet decided to do beta testing this way, as it allows everyone who wants to participate the ability to do so. We can also test-drive these specs in content we’re used to doing, which helps us understand how well these specs function in the content we are already doing. The only shortcoming of the beta testing is when I log off one of these characters and then log back in again. When I tried to log back into one of these beta characters, I found that my spec and equipped weapons were cleared out and that all the waypoints the beta character had before were wiped clean. This makes trying things out over a few different days more of a pain than it needs to be. The waypoint wipe was the most significant issue because it made taking these characters around to other areas much more painful. However, as of Thursday afternoon, it seems like this issue has been fixed, which is a huge help. 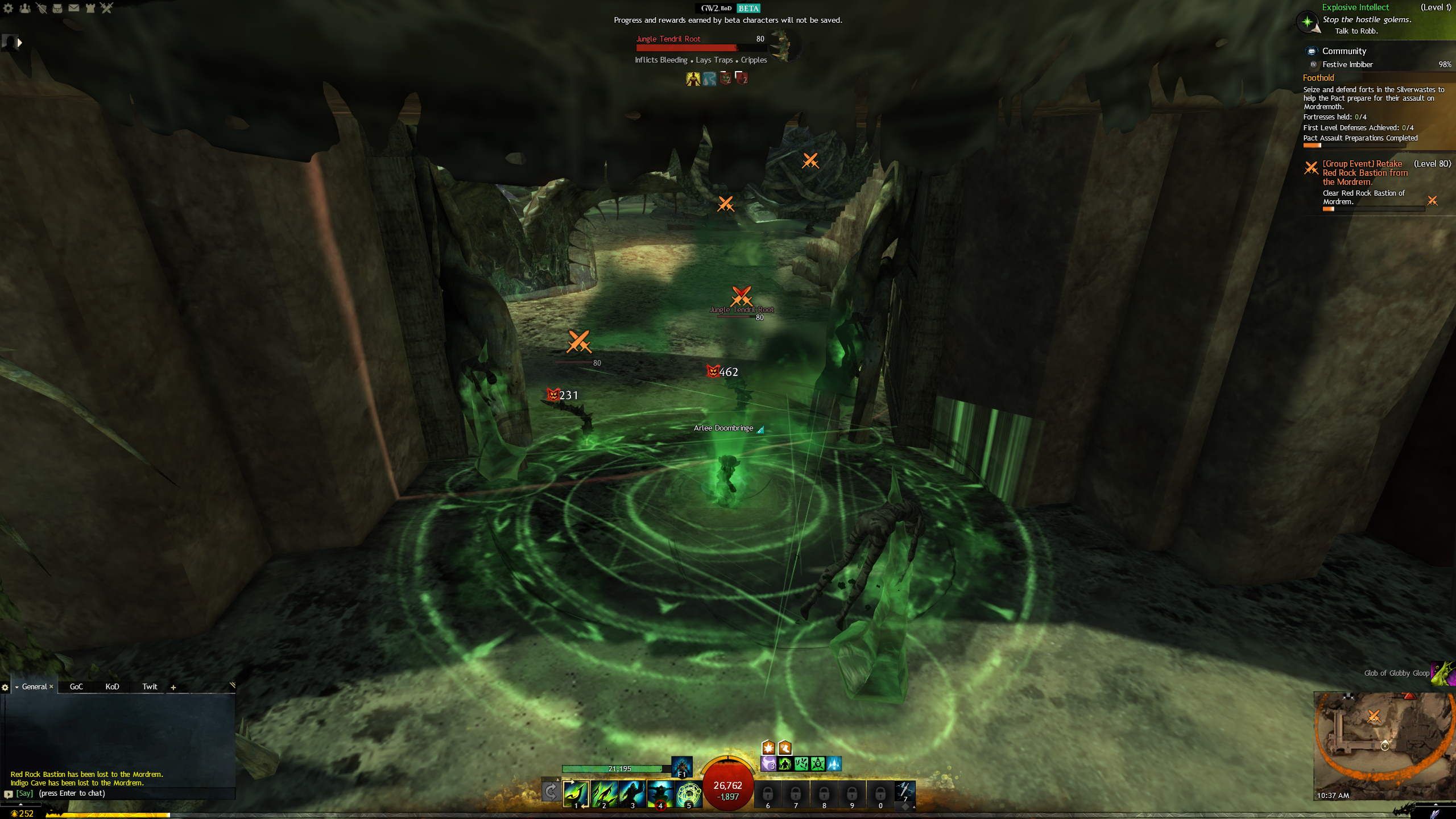 I have spent most of my time messing around with the Harbinger because I play my Necromancer a lot more than my Mesmer or Guardian. My initial impressions are that Harbinger is a lot of fun, but it resides on a knife’s edge, which is a style I tend to enjoy a lot. The pistol skills feel good and pair well with the dagger I was given for offhand. I liked the ricochet effect on the bullets when using pistol one skill, although it’s less noticeable after a certain threshold of mobs is reached. Pistol three is also super useful because it’s a stun. I found this particularly advantageous to use right before switching into shroud.

My favorite ability in shroud is Vital Draw which creates a well and causes enemies within the well to float for three seconds. The float also seems to stack with other Harbingers because when running around with a friend, we caused some mordrem wolves to float for six seconds. Not only is this effective, but it’s also hilarious to use. I quickly found myself running around, checking to see what everything looked like floating in the air. The tendrils were by far the weirdest, though. Aside from the Vital Draw, all the other shroud abilities also felt very effective to use. Devouring Cut was another favorite because it reminded me of a skill I use a lot on my Weaver. Devouring Cut launches the Harbinger at their foe, explodes for damage, and applies torment when they reach their target. Aside from being fun, it is also a great gap closer. 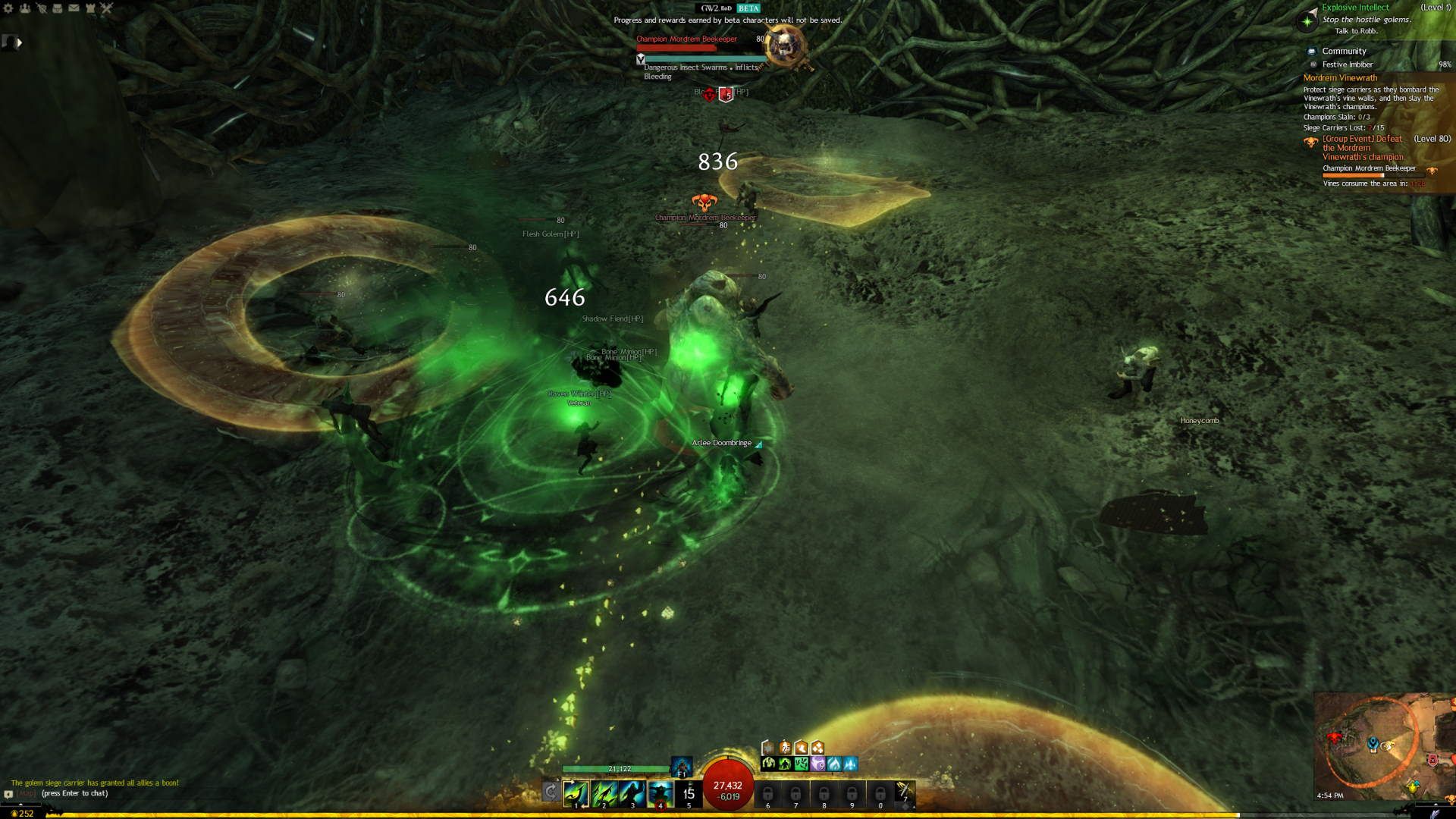 What I like the most about Harbinger is it feels as if it’s geared towards frequent dips in and out of shroud. I generally play Reaper, and most of the time, when I go into shroud, I want to stay there for as long as possible.  However, doing that on Harbinger would quickly lead to death due to the blight mechanic. Blight reduces max health but also grants a damage boost. This creates the knife’s edge feeling for this spec—balancing the drawbacks with the bonus damage blight also gives. This is also the area of Harbinger which feels like it needs the most work. It feels like there’s a lot of penalty but not a lot of benefit, currently.

You might have noticed I haven’t mentioned the elixirs at all. That’s because for most of my time playing Harbinger, I didn’t use them much. When I did use them, it didn’t seem like they did much at all, so it mostly felt pointless. Elixir of Ignorance which breaks stun is the only exception here; that one is useful and well worth taking some extra stacks of blight. The rest were just very underwhelming most of the time, and I quickly found myself not using them much at all, especially after accidentally stacking blight way too high a couple of times. It’s a combination of the positive side of blight not quite being good enough to make it worthwhile, and the elixirs are just kind of boring. 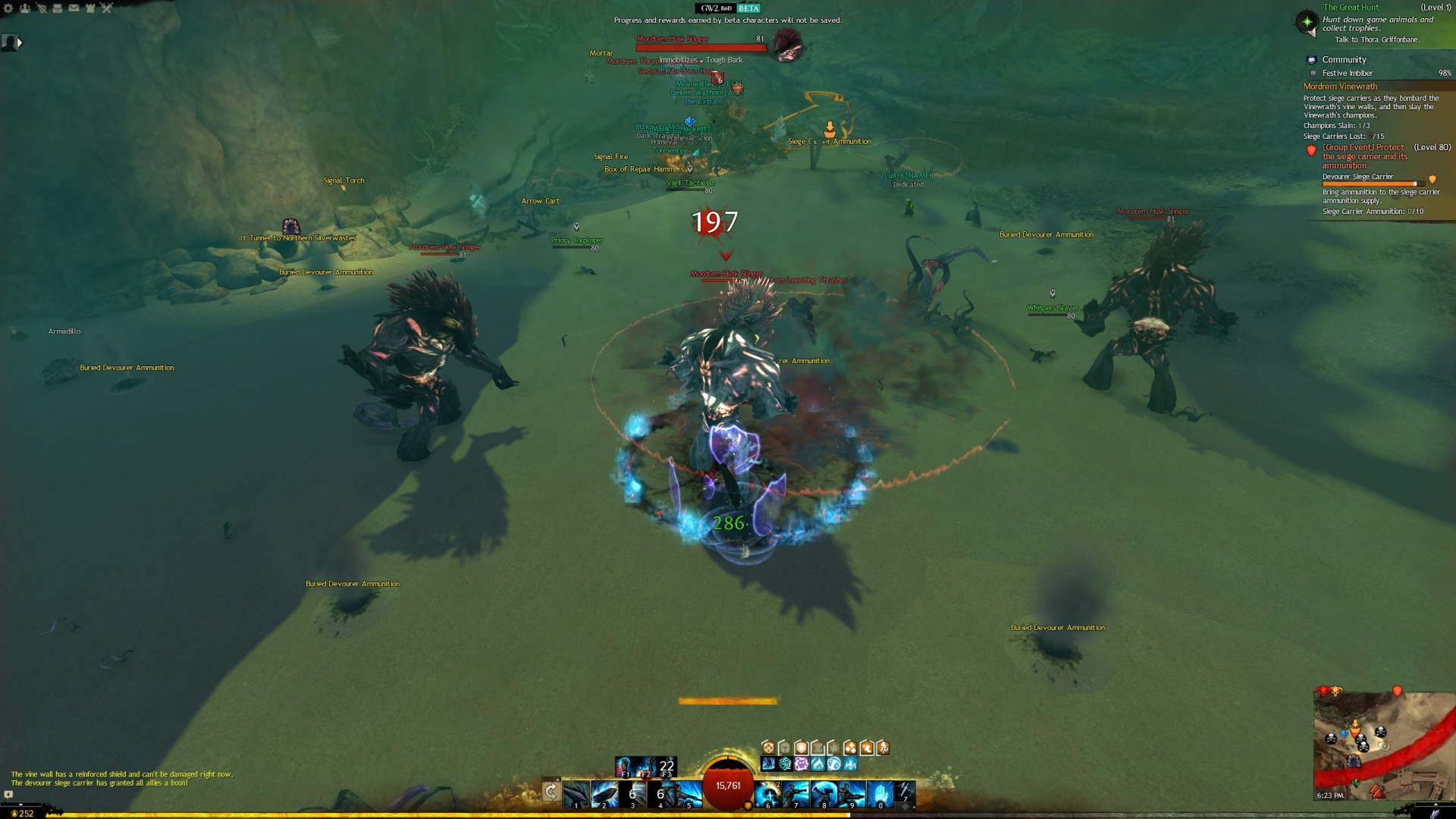 As someone who pretty much never plays Guardian, Willbender was also a good amount of fun. It felt powerful, and I rarely got to the point I felt like I was in any real danger. In fact, playing it reminded me a lot of playing my Revenant, who I’ve kept dual sword since I started playing her. My favorite thing about the WIllbender is the heal because it encourages skillful play. It’ll block the next attack and convert it to healing instead, even if the next attack would have killed me. However, the window for this is short, so I found I had to time it well. If mistimed, I would only get a tiny amount of healing back. So it wasn’t a complete waste, but not as good as when used well.

Sadly, I haven’t had the time to try Virtuoso yet, but I’m looking forward to giving that a try, especially since it removes clones as a mechanic, which is why I never stuck with my Mesmer for very long. I enjoyed Willbender but definitely had the most fun on Harbinger. The core of what is there seems solid, but it needs some balancing to make it feel more rewarding to stack up blight. I’d also like a bit of a rework on elixirs to make them more fun to use.

This has been quite good for a first look, especially since it seems like the logout bug has been fixed. I can’t wait to learn about the next three elite specs and give them a try next month. I’m hoping Elementalist or Ranger is one of them.