Genshin Impact has become somewhat of a phenomenon as it’s gained popularity outside of China, and has risen in reputation with Western audiences as a premiere Action-Adventure RPG. Prior to playing the game, as an outside observer, it was easy to call out substantial grievances in the direction and style of the game. As a player approaching the max Adventure Rank of 50, delving into the new story content from the latest update The Chalk Prince and the Dragon, Genshin Impact proves, once again, that its popularity is well deserved.

There is usually a dichotomy between Gacha mechanics and good video games. If a game is good, it generally doesn’t have a Gacha monetization system. If a game has an extremely addicting predatory monetization system, it is rarely, if ever, a good game. Genshin Impact is an exception to the rule, and the latest update foretells of a formulaic method that delivers, without solely relying on RNG to bolster lackluster content like other Gacha games do.

In The Chalk Prince and the Dragon, players are introduced to a new area of the map, Dragonspine, and a new character, Albedo. Albedo is the new 5-star character to join the gang of colorful, entertaining characters. While most updates bring about a new character or two, which usually furthers the story in some way - but ultimately is meant to pad the ever-growing gambling pool of characters, this update entrenches players in a brand-new map complete with its own challenging environmental effect, Sheer Cold. Somehow, I managed to earn Albedo on my first free roll. Albedo has his charms, but largely doesn’t fit in my roster, with his particular brand of AOE Geo Damage taking a back seat to far more deserving characters. Despite my misgivings with Albedo, the story itself is broken up into four parts, which is straight out of the miHoYo playbook with their last major update, A New Star Approaches.

The simplicity of the stories presentation is partially what makes Genshin Impact so addictive, even when played separately from the excitement of their habitual gambling banners. The main story follows you, your annoying pixie-like friend PAIMON, and your new friend Albedo as you learn more about yourself, and the mysterious new area, Dragonspine. Each main mission is time-gated. In fact, most of what there is to accomplish in Dragonspine is gated, somehow. The journey of exploration, surviving the cold, and battling through new enemies fosters feelings of accomplishment and fulfillment, even if any real adventure rank gains come at the speed of a geriatric snail.

What’s even more surprising in this latest update is the fact that many players have complained, myself included, that Update 1.2 is the first time there’s been any major performance dip from an update. I personally prefer to play on my mobile phone, but often swap back and forth from PC to mobile quite often. Skipping, hitching, and latency have reared their glitchy, abrasive faces, when previously my Samsung Note 20 Ultra would annihilate any mobile title, including Genshin, that I could throw at it, and I often ran the game on max mobile settings at a full 60 FPS on my flashy 120hz screen.

Complaints have rolled in on the Google Play Store and the official forums of poor performance, most especially in the Dragonspine region. This is likely due to the perpetual weather effects that inundate players as they travel about the land. The marginal hitching is easily overlooked in 1.2 when there is just so much to do, and not a particularly long time to accomplish it all. Genshin sneakily employs time-hurdles for many of 1.2’s events and rewards. Time-gated content is a personal aggravation of mine, but Genshin manages to parse the content with enough time that, in some cases, the time-gates are welcome additions, so that I have enough time to progress on some rewards, without having to worry about stagnating on others.

Genshin’s use of time is not particularly new in gaming, or even in the genre, but the extent and quality of the combat and content, packed into each time-release keeps me, and many others, coming back in ways that the dailies in Genshin, don’t. In a way it evokes similar feelings to the other side of the game, the Gacha system. The anticipation parceled out over the course of several quick-fire content drops culminates in a satisfying series of events that keeps gamers invested. In other words, Genshin Impact has created a unique way to fuel anticipation, apart from gambling money away on banners. 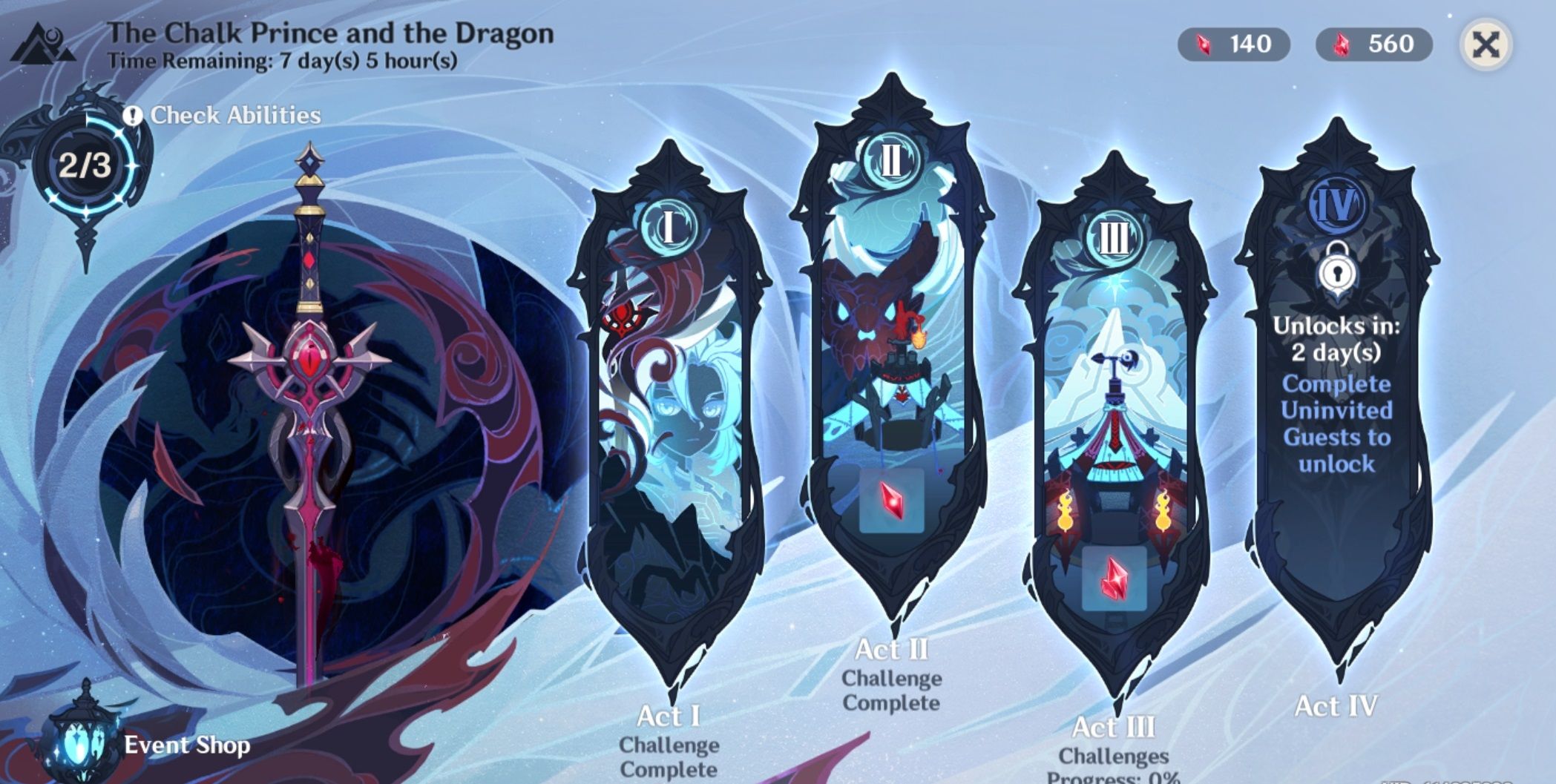 As we await the last piece of the story to drop in two days, and only seven total days left before the event ends, I do look forward to the conclusion. To state that I still emphatically reject the Gacha system in, not just Genshin, but the gaming industry as a whole is the understatement of 2020. Yet, I can’t deny that my journey through Dragonspine has been a fun one, and it leaves me looking forward to the expansion of the rest of the world of Teyvat, and the extreme challenges the rest of the land has in store for us.