When League of Legends was released in 2009, it was relatively non-competitive and seemed like a unique idea. It was also highly clunky, with the characters maintaining an older digital appearance with different rules and abilities.  Over 11 seasons of gameplay, Riot has severely improved the game. However, it still relies on an older engine and a high skill curve to succeed.

So when Riot decided to adapt LoL to mobile through the Wild Rift port, they didn’t just adapt it. They rebuilt the game from, and in many ways, simplified it. The decision to reconstruct the game on a mobile platform has allowed Riot to improve the game in an assortment of ways.

The Wild Rift port brought with it a serious update to the character models. While Riot has emphasized creating many visual updates for their champions, some still lack key details and maintain a placid exterior. Wild Rift allowed Riot to improve the champion visual styles and design elements, so they feel more modern and animated.

For example, look at Lulu, a Yordle support character. Lulu has been in the game since 2012 and certainly looks it. This is Lulu’s model in standard League as of 2021. 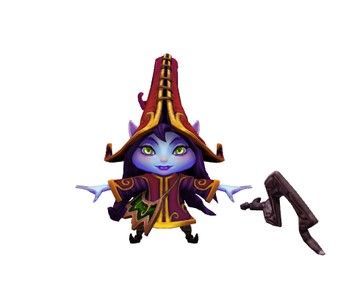 Contrast that with the Wild Rift Lulu, who is emotive and cartoony.

There is a massive difference in model design between the two, reflecting the character’s curious nature, and the ongoing updates to the Yordles in-game. While Riot occasionally updates champion visual effects and skins it would greatly benefit from updating many of the in-game character models like Lulu or Shyvana. Perhaps Wild Rift will offer the basis for future models.

One of the elements that Riot players love is their skins. Having a unique appearance for your favorite champion makes them feel even more unique, whether they be the Space Groove, Battle Academia or bee-themed lines released over the last few weeks. To get the most skins, players must either spend real money for RP and buy their preferred skin or rely on their skill to get enough Crates with enough champions to get a skin they like alongside enough Orange Essence to upgrade the skin permanently. It’s a tedious process.

One of the great benefits that Wild Rift has provided in its first few weeks is an assortment of events and level-ups that provide players with a few skins to start. By the time we reached level 10, we had received eight skins; five were randomly assigned, and we chose three through specially designed crates. We were also able to get 29 different champions. we earned 10 of these champs through leveling up in-game while the others came through choice or random selections. Riot’s current model for champion acquisition in league relies on the player buying them with Blue Essence and can range from 450 to 6300 essences depending on how new said champion is.

One of the more pleasant additions to League has been creating ‘events’, short instances where players can earn points and rewards by simply playing the game and pursuing special objectives to earn cool aesthetic skins, icons, and more. Until recently, events were considered relatively rare and only occurred every 1-2 months in League. Wild Rift has adopted a different approach, where many of the champions inspired their events. Both the Yordles (Teemo, Tristana, Corki, Lulu) and the Vastayah (Xayah, Rakan) all received their special events to earn icons and visual elements of their play.  With the release of Wild Rift in the US, players are getting an assortment of awards.

Having an assortment of events allows players to continue to progress toward rewards beyond ranked progression.

One of the elements that can ruin a game for new players is falling behind in the mechanics required for League and being called out. Suppose a new player doesn't learn to last-hit on minions, manage space, or master the counter-gank. In that case, they may end up several levels behind their teammates with no items. This often leads to the player being discouraged and leaving early.

Wild Rift has done a lot to simplify the game. While players are encouraged to play within their prospective lanes with the correct champions, the game is simple enough that choosing a wrong champion won't severely hurt the game. On Wild Rift, a new player running a tank in the jungle lane or playing the bottom lane with two AD Carries won't ultimately hinder players from understanding their roles. Mix that with a simple tap-to-attack system alongside easier ways to acquire gold, and the game's learning opens up to players. Riot wants players to take the time and understand how things work. That's why they typically reward them for completing tutorials and just trying the game.

League of Legends is considered highly toxic by many fans due to the game’s chat function. Veteran players will constantly accuse others of throwing the game, even demanding that they uninstall. They rarely offer meaningful feedback or allow even an ounce of grace.

While Wild Rift maintains a chat system similar to League, the mobile design disincentivizes players from spending excessive time typing up replies. Instead, the game encourages players to use prewritten messages and pings to broadcast their intentions. For example, the game asks players to ping their role intentions in a Draft game or pre-select it in Ranked. They can also use pre written statements to recommend farming, splitting or an assortment of strategies.

If a player uses their time to type out insults aimed at their teammates, they’re not playing well or doing anything.