SPOILER ALERT: This article discusses general themes and details up to 5.4, but avoids spoilers for 5.5. Do be warned!

A game with a story as grand as Final Fantasy 14 isn’t always going to be high-octane action. However, even in its slower moments, FFXIV lately still attempts to impress while progressing its story, characters, world and lore. So on one hand the brand-new patch 5.5, titled Death Unto Dawn, sees this lull in its primary story.

On the other hand, the slowing of pace in Death Unto Dawn allows the rest of the combat side content to stand out. We see the conclusion of the storylines for Sorrow of Werlyt, the Gundam-like mecha-centric Trial series, and the NieR Alliance Raids. Frankly, I don’t think most players would have been able to handle the emotional weight of all of these ending at once were the MSQ quests heavier in emotion.

This is not to say that the Main Scenario Quest’s content is poor, per se. The emotional highs of 5.3 and lore revelations of 5.4 mean that both the writers of and characters within FFXIV have their work cut out for them. Patch 5.5 is primarily exposition, which makes sense given not only, again, the prior patches’ hefty ambitions, but also the fact that the 5.5X patches lead directly into the expansion proper. If the history of FFXIV patches reflect its future, that means we’ll have far more exciting times coming in 5.55. 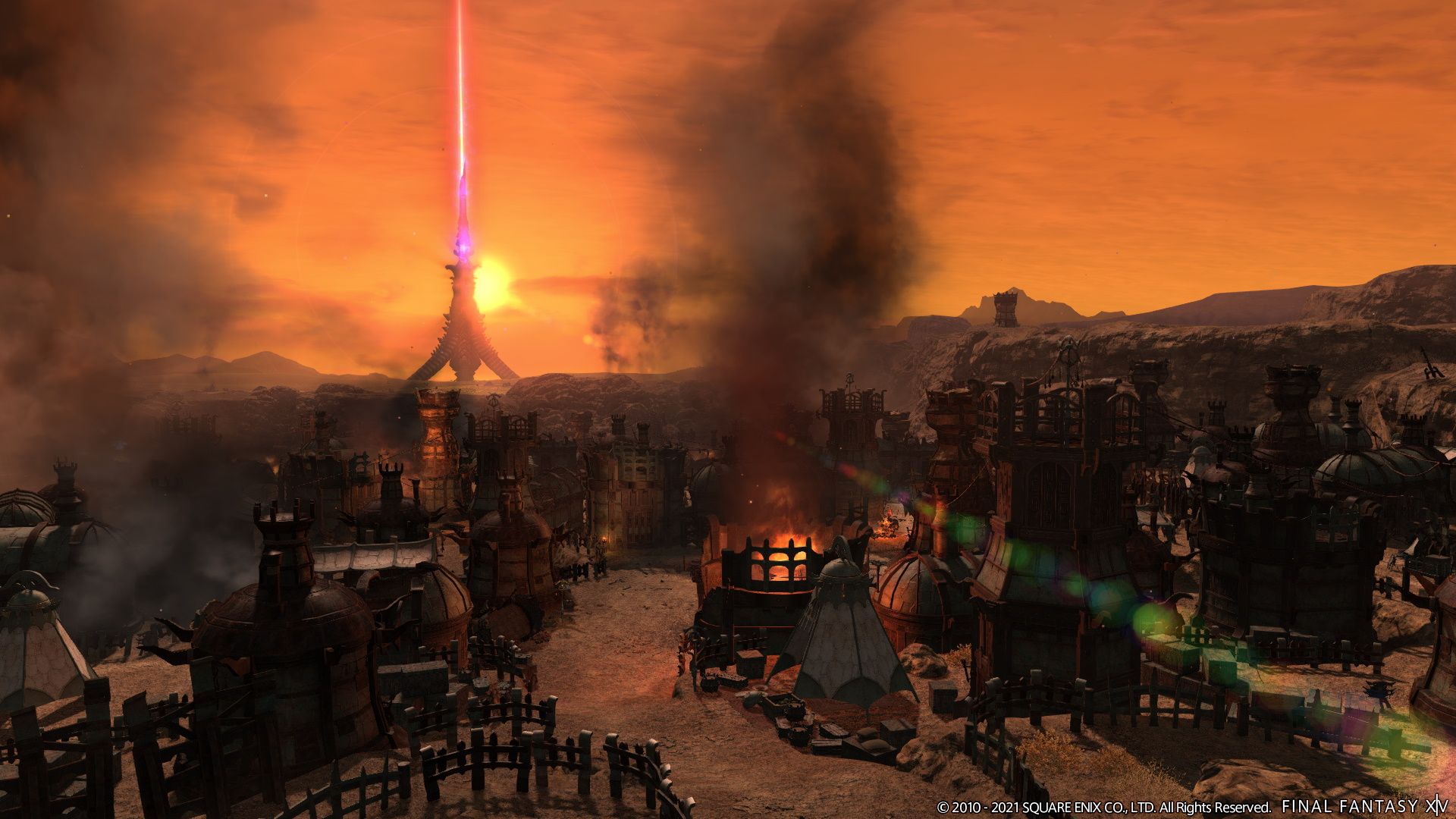 Disregarding the past and present, Death Unto Dawn’s MSQ storyline is a perfectly interesting chunk of content. We see plenty of old, unexpected threads coming together with recent revelations to bring exciting prospects into the story. That said, there’s not really much work to be done in regards to running around; bring your popcorn, because there are plenty of cutscenes.

The exception to this basically-a-movie setup is obviously the new Dungeon, Paglth’an, which takes players into the lands of the nomadic Amalj’aa tribes. This Dungeon takes the best lessons from other recent duties, especially Heroes’ Gauntlet. Admittedly, though, while its execution is fascinating gameplay-wise, it’s not much of a visual treat like other recent Duties have been. But given it’s more of a story-centric Dungeon, executing vital plot beats within the course of the Duty, it’s probably reasonable that it’s not overwhelming to the senses. (Not to mention it’s a desert, anyway.)

If you’re looking for more stunning gameplay, though, look no further than the side combat content released. It’s not just good in relation to the MSQ; the storylines shine on their own, basically wrapping up over a year of beloved content.

We’ll start with the NieR storyline; with Puppet’s Bunker, we already had a hint that the story would expand beyond the scope of the renowned Automata title. The new Alliance Raid, The Tower at Paradigm’s Breach, really elevates both the aesthetic and gameplay the NieR raid series introduces. The fights are stunning in every sense, featuring enemies familiar to long-time fans of the franchise with massive fights that are a spectacle — when you aren’t dodging the fascinating mechanics, that is.

It’d be wrong to say that The Tower wraps up the NieR storyline, though, as the development team already discussed. Now, there’s a weekly quest line that provides a little bit of lore each time you complete a new quest. It’s unclear exactly what the reward is besides lore. Still, it’d be a pretty Yoko Taro thing to do if there’s something more cryptic down the line instead of a “tangible” gift. If you’re interested and haven’t caught up to the current Alliance Raid yet, this is the time so you can keep up. 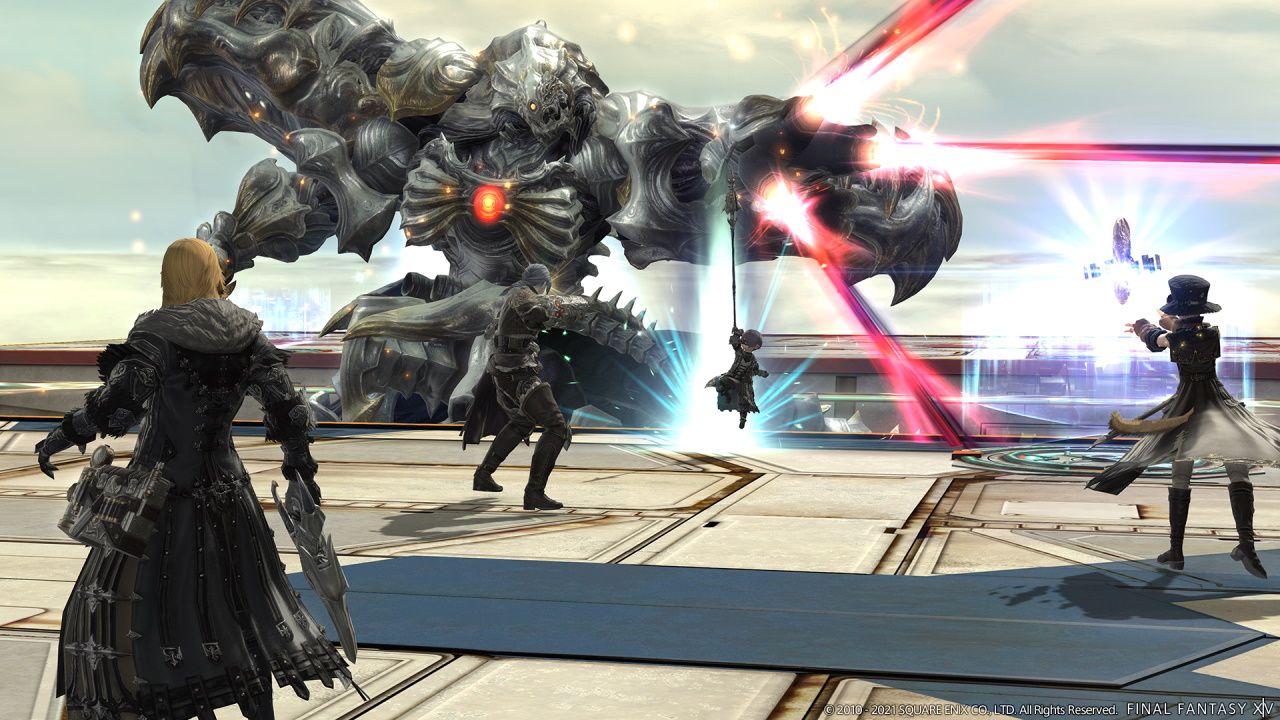 For those opting to stay grounded in the world of FFXIV, the Sorrow of Werlyt storyline also concludes with this patch through the Diamond Weapon, accessible in the new Cloud Deck Trial. If you’ve been invested in this in any way, like I personally have, then you’re in for a treat. During the Live Letter from the Producer, director Naoki Yoshida said he was having a hard time avoiding spoilers in showing the trial and content, and honestly? I get that now.

It’s worth the wait. The Sorrow of Werlyt’s conclusion is absolutely the best part of 5.5. I’ll just say that there are both horrowing and satisfying developments, and the Diamond Weapon fight is fun as hell. I also hear that the Extreme version is fun, too, and a lot easier than other counterparts, if that’s your cup of tea.

Death Unto Dawn also brings a ton of other great little updates. I do need to shout out to the 4k icons, which look great on my Windows app and look crisp as heck. And, it seems there are also faster loading times for those of us with solid state drives. It was already only three or four seconds to load into a new area, but it’s been cut down by another second or two, depending on destination and provided there’s not a huge crowd at your destination. (Or maybe I’m just imagining it, but I definitely don’t remember certain areas loading so fast.)

I’ve also been told the new Custom Delivery storyline in the Firmament is cute, and I’ve been seeing quite a few people around with the golden Namazu courier. And maybe this patch, I’ll actually tackle the Unreal Trials. If I’m being honest, this patch, there’s a lot to take in, from story to quality of life changes — and I do recommend you enjoy every drop of it.

If you’ve not sure whether it’s time to catch up before Endwalker: I’d say yes, it’s time to get that update in and get rolling. With Fan Fest and likely more Endwalker announcements arriving in about a month, which will surely have more than a few spoilers, you’ll want to be caught up. (Already, the teaser trailer has major spoilers.)