We’ve finally unearthed the Buried Memory, the latest patch for FFXIV, and with it comes plenty for fans who are sticking to the game to enjoy. Patch 6.2 obviously dropped the much-anticipated Island Sanctuary, which we’ll visit in another article.

But alongside that comes more of the story that makes FFXIV great. We have new MSQ content, as well as more of the raid series Pandaemonium, both of which cover old lore in new ways. While the story’s good, does everything else that it entails hold up? I tackled it day one to find out, and thankfully, it’s all pretty good.

The MSQ has been keeping pace in the way that it’s meant to: as a new adventure, exploring more of the wonders that the universe has to offer. This time, we finally, actually get into more about the World of Darkness and Voidsent lore, and it’s worth the wait.

This time, I need a whole section to gush about the normal-tier gameplay; I haven’t cleared the Extreme trial yet, and I’ve heard it’s a doozy (a fun one, at least). But for everything else? Oh my gods, the gameplay team has absolutely outdone itself with the package of combat opportunities that we get this time. 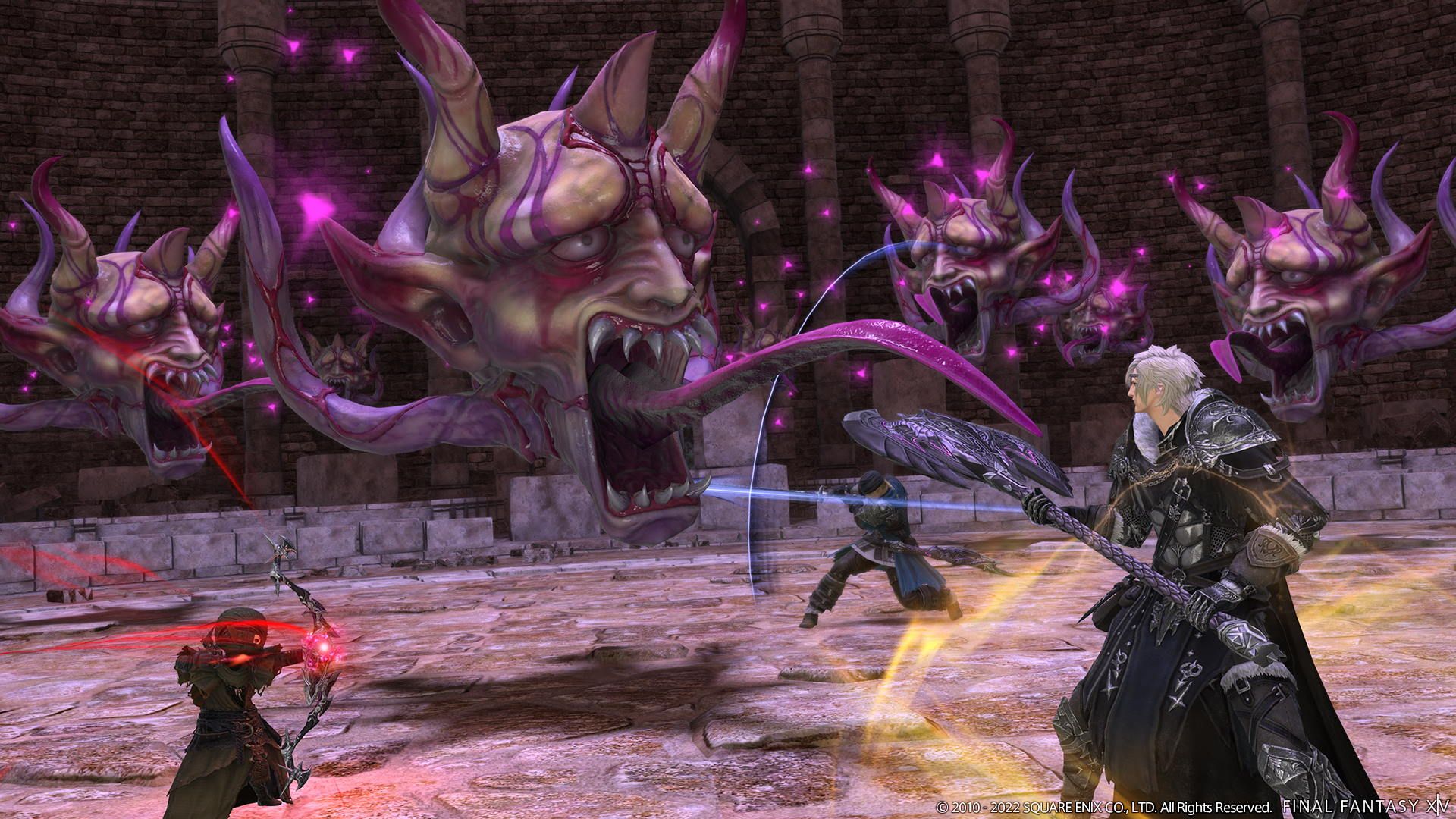 Starting with the actual mechanics–while I don’t think the first dungeon’s boss itself is spectacularly designed, everything else, all the way through the raids, was a blast to play. The choreography, as they often call it, makes sense and is learnable, yet it still offers up that challenge that makes FFXIV such a fascinating multiplayer game. Familiar mechanics are executed with the precision expected of level 90 players while being approachable, and failed points of execution are easily learned from, which isn’t always the case in less-friendly FFXIV bosses.

The aesthetics of these battles make the experience all the more thrilling. In certain parts, old Final Fantasy fans in particular are in for a treat, but these elements are integrated into the mythos of FFXIV well enough that players new to the series won’t be left out at all. Without delving all the way into spoiler territory, we do get a few types of remixes. And even old references aside, everything is absolutely gorgeous.

The Pandaemonium raid series also continues to build intrigue around the game’s world. We finally meet the pre-disaster version of one of the series’s most iconic characters and learn a little more about the type of person he was, and how that affected his creations and work.

And on the same thread as the MSQ, I especially have to call out this raid series, which seems to feel a lot more inspired this time around. The gameplay was a complete blast to learn, with plenty of neat tricks that felt fun to tackle, even through a few deaths.

There’s definitely a case to argue that the raids’ music isn’t so vast in inspiration, as three of the raids are centered around one song: one with an instrumental melody, and one with vocals. But the Evanescence-inspired tune that the team put together this time is so good that, frankly, I think a lot of players would be disappointed if it only showed up in one raid. Like, have you ever enjoyed something so much that you need to loop it? That’s the vibe. 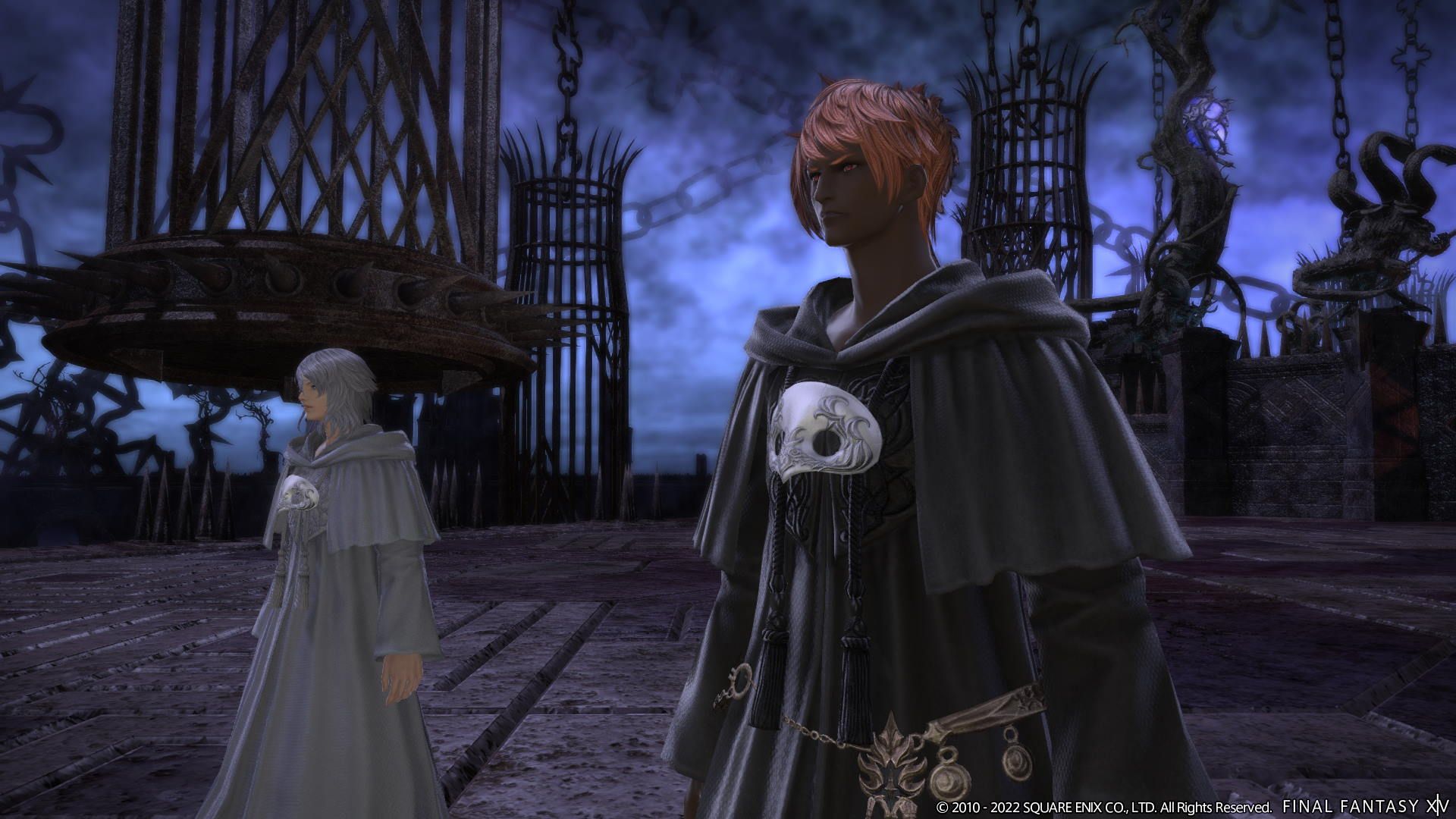 And the story, meanwhile, drifts away from a hard-lore approach, which may be a job satisfied by the MSQ anyway, and focuses more on the human stories that make FFXIV such a beloved game. It leans into many of the critiques of certain utopian attitudes, without Endwalker spoilers, that the original expansion starts to touch upon, and gets into the more mundane consequences that feel plenty more grounded in reality.

Ever Expanding The Worlds

There are a few new quests here and there, as well. If you’ve beaten the Void Ark quests, you get access to the next leg of Tataru’s Grand Endeavor, which directly deals with those sky pirates. A new side quest near the final MSQ quest also unlocks that gives a little more lore regarding certain villains featured in this new patch.

Ah, and of course, there’s Island Sanctuary. On the more crowded servers, it’s caused a bit of an instance overload thanks to it running on what seems to be the same tech that runs all other instanced stuff (like Housing, which got clogged alongside Island Sanctuary). I think that deserves a better review when things are a little

More than anything, it’s impressive that the FFXIV team manages to keep up with itself in regards to coming up with new ways to explore old concepts, characters and settings. There was definitely an interview lately where the creator of the Final Fantasy franchise said he wished there were more to do in these vast worlds, and even just being able to revisit some, or exploring new ones in the context of old concepts (like the Void, in specific) makes the MMORPG feel a lot more lived-in.

And there’s still more to come, with the Hildibrand quests arriving in a few more weeks, plus Savage content dropping… probably the morning this publishes. Oops.

Should I Hop Back In?

If Island Sanctuary isn’t actually your jam, then it’s yet another patch where I’d argue–either wait for 6.25 for the weapon grind, or wait a liiiittle longer. I mean, what we have is great, but truthfully, a lot of this is stuff you can catch up on in a week or two if you re-subscribe eventually.

Discount all that if you’re a lesbian. This patch is absolutely for the edgelord lesbians. Trust me. Get in here.