I never really was an "alt" person in MMORPGs until Final Fantasy XIV sunk its teeth into me in the early days of the pandemic, and now you'd never know it from looking at my character sheet. I've leveled all 11 gathering and crafting classes to the level cap of 80. I've also finished up 11 of the 18 combat classes. I'm in so deep that I'm even in the latter stages of leveling my Bard—a class that has always bored me to tears—and I'm still having a fairly good time. This never would have happened in most of the other major MMORPGs I've played, whether we're talking about World of Warcraft or Guild Wars 2. So what's the difference? Part of it's simply that FFXIV is a damn good game these days, but it's mainly because no other mainstream MMO is so adept at respecting your time when leveling alternate characters.

The trouble with leveling alts is that getting to the level cap is only one part of the equation, particularly if you ever want to make an alt your "main." And if you want that, that means reamassing tokens for gear, spending weeks or months building reputations with various factions, and sometimes unlocking beloved titles you had on another character. That's a daunting prospect, as I was recently reminded when I convinced myself that I'd be happier playing as a Warden in The Elder Scrolls Online. Oh, I loved it for a few levels. It paired well with my rural upbringing and my buried regrets about becoming a forest ranger. 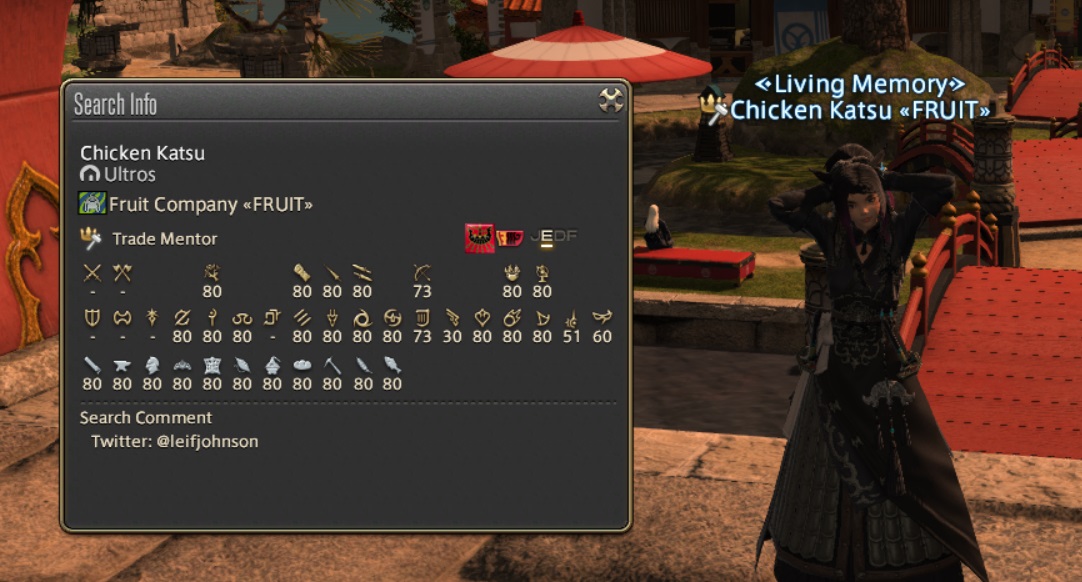 I've been busy in FFXIV.

But I just couldn't maintain that enthusiasm, particularly with everything else I've got going on in my life at the moment. Around 10 levels in, I opened the world map and frowned at the dozens of wayshrines for quick travel that I'd yet to rediscover. I winced at my Warden's skill trees, which showed nothing of the weeks or months I'd dedicated to fleshing out the lines for factions like the Dark Brotherhood, Psijic Order, or the Mages Guild on my Sorcerer, Nightblade, and Dragonknight. And at last, I literally rested my face in my (washed) hands when I got on my glacially slow mount and realized it'd take 60 days of constant play to get it back to the speeds I enjoyed on my other characters. I'd done all this three times before, and I can't bring myself to do it again. And this isn't even counting ESO's crafting system, which makes players spend months researching traits for gear sets. I'm convinced that anyone in ESO who makes more than one Master Crafter needs to have their head examined.

And so, dear readers, I shelved the Warden. The upside is that I love my Sorcerer main enough that this isn't much of an issue, but I know I'll probably always nurse a nagging feeling that I'd enjoy ZeniMax Online's game more if I were playing a class that better fits my background and personality.

Issues like this never really happen in Final Fantasy XIV because it's designed so that you do everything the game has to offer on a single character. Nothing is stopping anyone from making traditional alts, but it's wildly unproductive. Even though you do have to level classes individually, the act of actually changing to a different class requires little more than switching out your weapon. You obtain all tokens for gear on that single character regardless of which class you're playing, which means you can venture into a trial as a Samurai and use the tokens you earn to gear up your tank. Even if you've maxed out the reputation for a faction like the Stormblood expansion's Namazu on one class, you can revisit them on another and use their daily quests to gain XP. Titles and mounts are shared. Some gear is even shared among classes. If you need to craft or gather something, you can, so long as you've leveled the appropriate class. And for that matter, you don't have to redo the main quest, which is so ridiculously long that I'm convinced it's the main reason why FFXIV doesn't have a larger player base than it does. 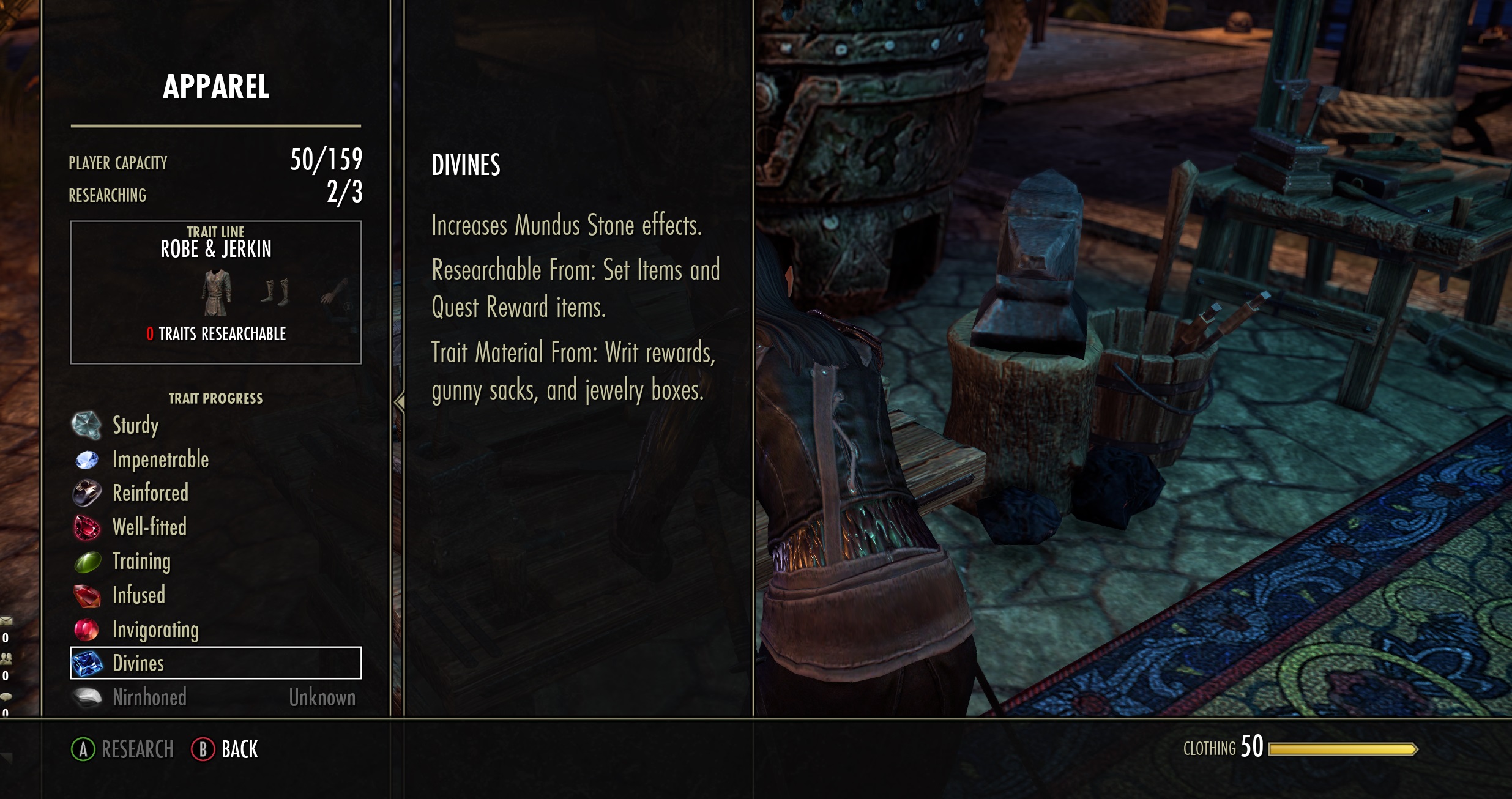 A crafting window in ESO. See that panel on the left? Now imagine doing that for all types of weapons and armor. And then imagine doing it on every character.

The best part of this design is that it lets me maximize my time in ways few other MMOs allow for. By way of illustration, let's say I'm playing on my Sorcerer in Elder Scrolls Online, waiting out the occasionally outrageously long DPS queues, and someone offers me 10,000 gold to make a robe from a specific set. My Nightblade is my best crafter, so if I want to make the sale, I'd have to switch characters and lose the 20 or so minutes I may have already spent waiting for the dungeon to pop. If it'd all been on one character, I probably could have crafted it and made the sale before I even had to venture into the dungeon. That's how it works in FFXIV, which also lets me jump into the queue as a Level 80 Samurai and then switch over to my Bard for leveling while I wait. In other MMOs, particularly if you've already completed most of the PVE content, you're likely to spend a lot of that time parked in capital cities and participating in whatever inane conversation is going on in zone or trade chat.

There are other benefits, too. If I level a Bard and decide I don't like it, I won't have lost everything. Everything I picked up on that character aside from some specific gear is still available to every other class I play. Every quest I finished with it is marked as completed regardless of which class I'm playing. It means I don't struggle as much with the disorientation when I come back to the class after not playing it for ages. If my guild decides they absolutely need a Bard for a specific trial, I'll have one at the ready and will get the same credit that I would have if I'd been playing on my Ninja main. And it also means that if Square Enix eventually molds the Bard into something that's more appealing for me, I'll be able to hop on to the character and transform it into a main far more easily than I would in virtually any other MMORPG I know of (although, unsurprisingly enough, Final Fantasy XI comes close). FFXIV allows me the freedom to change my mind.

More than anything else, this elegant design is what keeps me coming back to Final Fantasy XIV. I still don't think of myself as old, but I've reached the age where I have little patience for repeat experiences, especially when those repeat experiences drag on for weeks and months while I get a character back to where I want it. I don't want to waste time, and I want to experience new things. Or, if I have to repeat experiences—and I almost certainly will, considering the centrality of the mind-numbing Main Scenario Quest roulette to the FFXIV alt leveling experiences—I at least want to know that the peripheral leveling experience is as efficient as possible.

This isn't necessarily a call for other MMORPGs to mimic FFXIV's design. Even I'll admit that there's a bit of a disconnect in roleplay when a character goes from being a hulking "Dark Knight" in one moment to being a fairy-friendly Scholar in the next (although that concept does allow for some pretty cool cinematics). Some people even like the alt experience as it exists in games like World of Warcraft and Elder Scrolls Online. As for me, these days I gravitate toward the MMO that least makes me feel as though I'm being punished for wanting to main a class that didn't exist at a game's launch, and right now that's Final Fantasy XIV.

Leif Johnson has been writing about games, tech, and entertainment for publications ranging from IGN to Rolling Stone for over 10 years. He plays most MMOs casually now, but once upon a time he was in one of the top guilds in early World of Warcraft. He lives in San Francisco.