Games are creative and interactive works of art. From the landscapes and worlds that developers create for us to explore to the stories they lovingly craft, games are an artform unlike any other in today's entertainment industry. Yet it's always just as - if not moreso - interesting when the community are given the tools to create their own worlds and art within a game.

Fallout 76's recent Fallout Worlds update is allowing for just that. While the survival game set in the iconic franchise always allowed for some creative base building, Worlds is letting players take it to a whole new level and create the types of...well...worlds they want to play within. We took a look at the community creations that have been pouring out of the survival MMO and are sharing with you some of our favorites to showcase the creativity of the community.

A bit festive, though fitting for the time of year, Jessica-Star's Nightmare Before Christmas homage shows that you can take the tools given by the developers and recreate something iconic.

The Tweet showcases the character atop the iconic swirling hilltop, the moon hovering in the distance. The hill itself is made of a multitude of Jack-O-Lanterns, with a greenish glow in the background really setting an eerie mood. Is it a Halloween night or simply radiation still in the air causing the color? I don't know, but it works!

Uranium Fever's YouTube channel showcases two videos, both paying homage to their custom Worlds build: Liberty Prime vs Liberator Prime. These videoes show off colossal mechs, and the struggle for Watoga. The description of the videos talk about Watoga being under attack by the Red Vipers, seeing Armor Ace and the Power Patrol seeking help from Liberty Prime.

The videos feature builds from creators Bad Notions, Spyderfett, Drago, CLVLND and Duke Destro, with the channel promising the struggle between the factions over Watoga being featured in an upcoming full video. Giant Mecha in Fallout 76 wasn't necessarily something I expected to see when the game first released years ago. Power armor? Yes. Iron Giant-looking mechs duking it out? Not so much. Can't wait to see the full video, and you should check out Uranium Fever's channel out further as the creator has some incredible machinima videos showcasing the creativity of Fallout 76 players.

Now this one is impressive. Reddit user LoganRTX posted on the official Fallout 76 subreddit their build of a medieval castle within Appalachia, and it's definitely a looker. 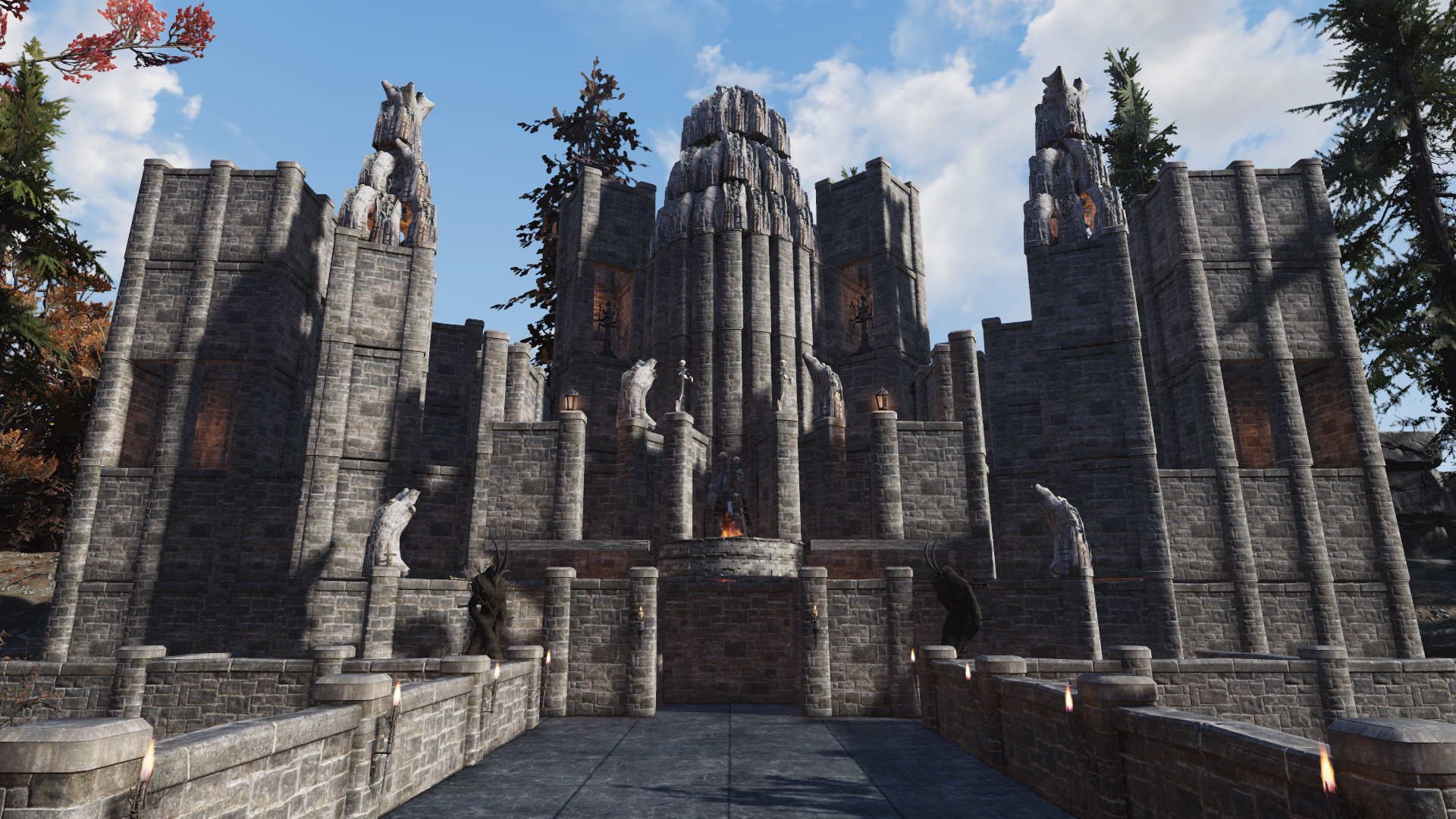 The inside is even more impressive, with a spooky crypt that holds the remains of the previous tennants to a showpiece altar that glows with a (possibly nuclear, possible ethereal) light. It's impressive work and easily one of the best builds I've seen in a game like this. Check out the walkthrough in the accompanying video.

When I first saw this build on the official Bethesda Discord channel, I honestly thought it fit easily into either a post-nuclear world like Applachia - or even Cyberpunk 2077. The use of neon signage, lighting and the overall aesthetic drew me to this instantly when researching this list. The cluttered feel and patched together vibe screans that it belongs in a post-apocalyptic world like Fallout 76.

It has a patched together feel that drew me in at first. The fact that it's not a full sit down restaurant and instead a noodle bar on the corner of a street also added to the overall build. After a hard days work clearing Appalachia of rogue robots and oversized bugs, I could see myself coming here to Nuclear Noodle to get a hard-earned meal from the robot vendor behind the counter.

I love me some Burger King. Really, when growing up on the Air Force base, at the time it was really the only restaurant to go to other than the NCO or Officer's Club, so when we would make the trek on-base to BK it was special for me and my brothers. So when DatJuicyPickle's Burger King build was sent my way, I knew I was going to include it here.

Built in Fallout C.A.M.P. (like the rest of the builds before), this super clean build makes you forget that you're in a post-apocalyptic world given how outrageously clean the exterior is compared to some of the others I've seen. Sure, a wire-gate door isn't the best look for what on the inside looks like a sleek and modern burger joint, but it doesn't ruin the illusion.

It's not as intricate as the Elden Castle showcased above, but it evokes an emotion out of me that I wasn't expecting to see from Fallout 76: nostalgia. I could see myself sitting in one of those booths as a kid, eating my Whopper and being excited we weren't having meatloaf for dinner that week. Check out the video walkthrough below.

Got a stellar Fallout 76 custom world build and want to share? Let us know in the comments below.