EVE Online has felt like it's at a bit of a crossroads this year. From the announcement in late Winter that the Icelandic MMO would stop seeing the rapid-fire Quadrant updates ahead of its player convention to the announcement of a new, narrative-focused arc during Fanfest 2022, the sci-fi MMO has felt sort of in a holding pattern since then.

Speaking with players at Fanfest 2022 in Reykjavik, and then in the weeks afterward, there felt like there was sort of an anti-climactic letdown surrounding the announcements made on stage by creative director Bergur Finnbogason and his team. Promising some of the biggest updates to EVE Online to date, for many established EVE fans, it fell flat.

"For the last couple of weeks, we've been kind of dropping some more information about the big key features we announced at FanFest," CCP Games' Peter "CCP Swift" Farrell told MMORPG.com in an interview late last month. "So yea, of course at Fanfest we said, 'Hey, we're going to redo this.' And people who are really liking that feature were all about it, people who weren't really quite sure were still not quite sure."

Tackling that head-on is key to ensuring that when Uprising launches in November that EVE's renewed focus on narrative and the stories that can be told in the MMO by its players don't fall flat. And the announced features are definitely ones that are pretty exciting overall, especially if you're a low sec player like myself.

The highlight for many, of course, will be the changes coming to the Factional Warfare system. As it stands in EVE Online right now, this is little more than just window dressing, giving a low sec playground for players to engage in fights against each other, but without any real stakes involved.

Each system feels identical to the next, with no real incentive or goal in mind when you jump in to engage an enemy. It feels like any other low sec zone, simply with a Factional Warfare UI addition on the left-hand side of the screen. More often than not now, I simply travel through these zones rather than stop to fight in them, as there really is no reason to unless the ship I'm hunting (and will eventually lose to in PvP, but what can you do) stops there.

Now, however, as Uprising starts to trickle out, Factional Warfare might have some real consequences, especially for those who follow the NPC Empires and their narratives throughout New Eden. The change from what feels like just barren, copy-and-paste space to warzones that feel active, dangerous, and, hopefully, rewarding will be a refreshing addition to a mode I really want to love. 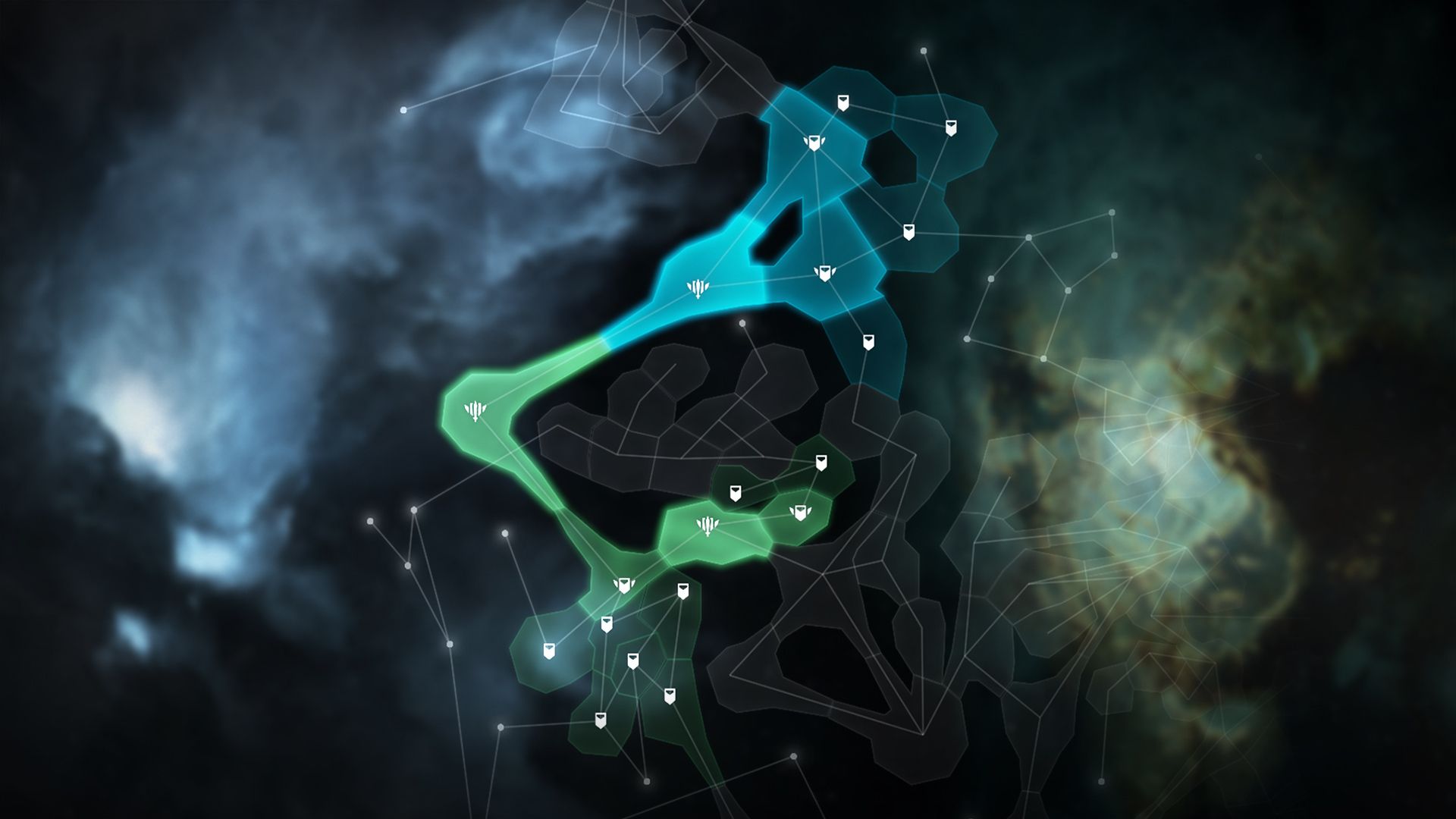 The idea of Frontlines as well, which aims to give Factional Warfare zones more meaning, as well as more information to newcomers as to which systems are most important, is one I'm totally on board with. When the feature was talked about at Fanfest 2022, CCP Aurora highlighted the upcoming feature as a way to give each Factional Warfare zone meaning, with frontline hotspots becoming massive zones of conflict between the bordering empires, but there would still be meaning in those systems farther away from the border, such as supply lines and more.

Systems changing hands could have some real consequences for the Empire that loses a border system, which plays into the narrative arc that CCP is pushing with Uprising and the weeks leading up to its release. Players can really hone in on their favorite empires and start to write the history of the wars between the established NPC Empires themselves, rather than just the player null sec blocs. Being Gallente could have more meaning to players who participate in the skirmishes in Factional Warfare than just it being a source of roleplaying, especially as the narrative arcs CCP is deploying take more shape.

CCP's State of the Union post last month outlined some of these changes and what they bring to New Eden, and while we know not every single one will end up in the MMO right away, getting a start on making these FW zones more meaningful could go a long way towards facilitating low sec PvP beyond just the roaming bands of pirates that currently terrorize the systems. And with new players as a major focus for CCP, a revamped and more meaningful Factional Warfare could go a long way towards keeping a pilot in-game rather than falling away from New Eden after a short period.

It seems weird that almost 20 years after launch, CCP is finally adding player heraldry to ships in New Eden. This is a feature that many have clamored for over the years, and it reinforces the most important aspect of EVE Online: its players.

Heraldry is a way for players to show off their allegiances to start off, but I love the idea of it potentially becoming more. Having my character's name emblazoned on the side like a Top Gun pilot would be an awesome bit of personality I could see Capsuleers doing if this were real life. Seeing my kill marks clear as day on the port side of my Machariel could strike some fear into the opponent who I'm starting to assail, as they see I've come out on top of countless skirmishes in my battleship. 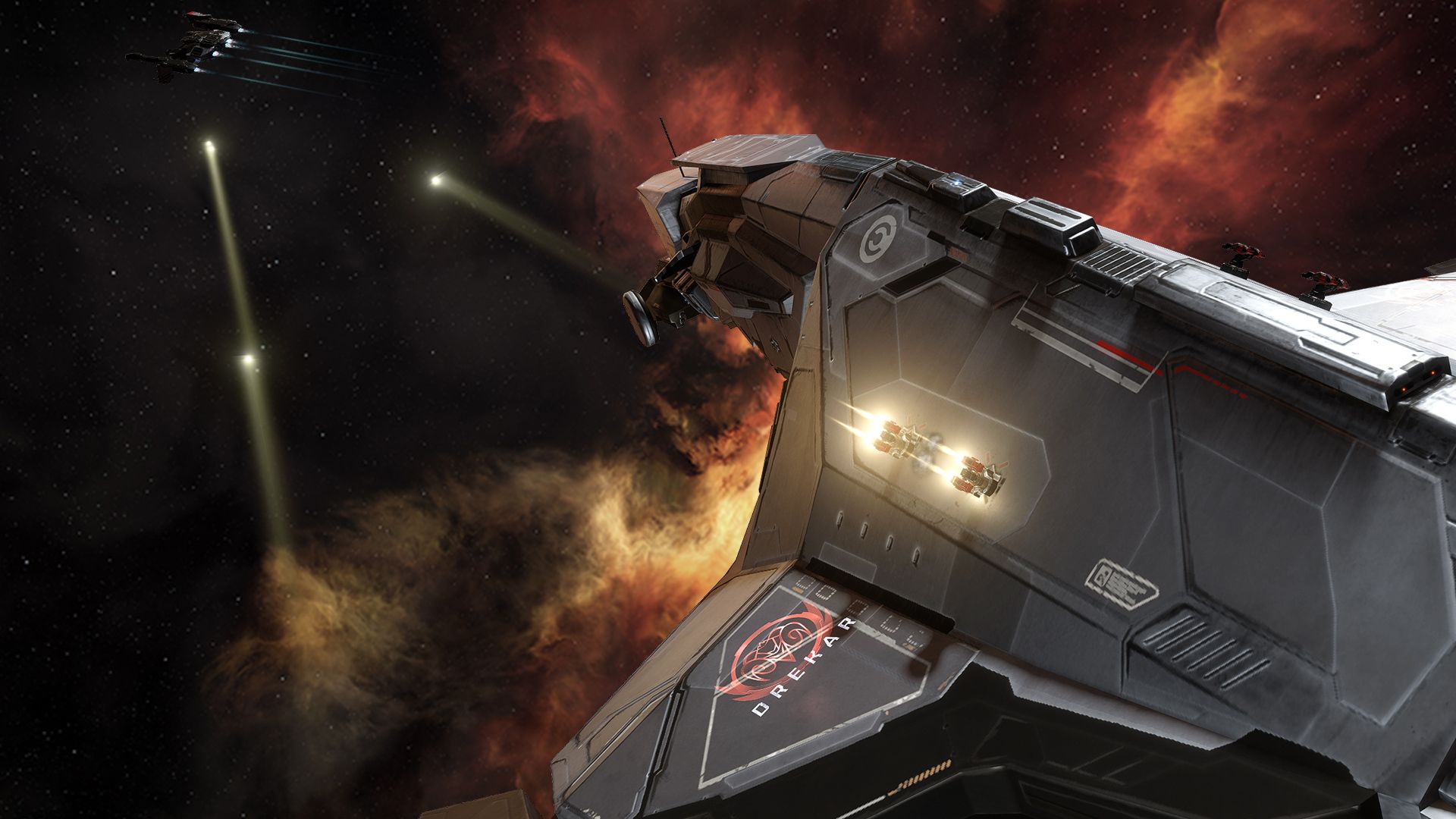 Imagine the player wars that see thousands upon thousands descend upon servers, sometimes crashing them, but other times taking part in hours-long battles. Seeing players ride into battle with their corporation or alliance clearly emblazoned in all their glory on the sides of their vessels is going to be a sight indeed.

It also is only the beginning, with CCP Games hopefully allowing player designs and individual decals to be added in, especially for those lone wolves who don't take part in corporation politics, but instead hunt to their hearts desire. Seeing a player's sigil become widely known because of their prowess organically would be awesome to watch indeed.

EVE Online already has what I consider to be the most active roleplaying community in any MMO on the market. Everyone is playing a character in every MMO, but few games take it as seriously as EVE players. Whole personas are built around the name of a notorious alliance leader or pirate, trader, and more. It's a community that feels like it flourishes because it's integral to the EVE experience, rather than just being a side activity to join in like it can feel in other MMOs.

Roleplaying doesn't mean that you're always speaking in your character as well. I'm not constantly running around, telling players to fear the PvP ineptitude of Eldalye Ancalima, the Gallente-born, Caldari-aligned pirate. But I do feel a kinship with that persona whenever I'm flying around low sec, playing the role of a pirate who thinks this time I'll fare better.

Roleplaying could, hopefully, rival what we saw during the Triglavian Invasions a few years back, where players were declaring for one side or the other and taking part in meaningful, massive battles against each other that had real, lasting effects on New Eden. Moments like this also shock players into caring about the story when before it might not have been something they gave a second thought, most days.

Farrell brought up the Invasion a few years ago in our interview as an example of this, where there was this player war ongoing at the time as well, and the NPC escapades turned into something that engulfed even World War Bee 2.

"There's a group of our players that just really think they don't care about the story too much until it actually kind of takes place. We saw this with the Invasion, which we did a few years ago, that was completely narrative-driven. Players could come in and determine the outcomes, and once they realized what that meant, I think they realized that we're not just going to step in their place and tell stories for them. We're just giving them new tools where they can actually tell the stories as well."

This was perfectly highlighted during the Invasion when an important linking system in what was the Silk Road of New Eden was flipped to the Triglavians. Niarja, which connected the routes traders took from Amarr to the main hub in New Eden, Jita 4-4, was cut off from the Stargate network thanks to the actions of players, turning what was a 9 jump trek into one that now takes more than 40 jumps to make now. It irreversibly changed the literal layout of New Eden, threw trade into some chaos and saw the emergence of new trade routes and zones of commerce as a result - all because of a narrative arc CCP started, but players helped create.

I'm hoping we see that here too, that type of emergent, FOMO-inducing gameplay that EVE Online can allow to flourish if done properly. And since the vast majority of EVE Online players identify intimately with the characters, alliances, corps, and empires they've built, it makes it all the more meaningful to the community when these things happen.

Keeping A Bit Of Healthy Skepticism

However, it's important to keep some form of healthy skepticism when looking at the upcoming Uprising update. EVE Online's last few years have felt tumultuous to many who make New Eden their gaming home, especially with the massive changes to the economy, the scarcity era and some of the most beloved - if not overpowered - ships.

"I think a healthy sort of skepticism does exist still in the community amongst a lot of players, " CCP's community developer Dan "CCP Convict" Crone tells me in the same interview last month. "Especially ones who have played for a long time, [and] who want to see us actually deliver on the things that we promised."

Convict would go on to point to the ways CCP is keeping up the communication with players, including hosting blogs detailing new information, streaming round tables with the developers, and more in order to get the information on the upcoming changes out to players and get feedback as the development is ongoing. This approach is definitely more communicative than before, and myself personally found it incredibly refreshing, especially for a company with such an open relationship with its community at times.

However, dev blogs, Fanfest announcements, live stream Q&As and the like mean nothing if the team doesn't deliver, something CCP Games is likely keenly aware of, especially as the MMO turns the corner into the third decade. Time will tell how successful this approach will be, with EVE: Uprising being the linchpin to tie it all together.

But if it works and CCP delivers, it could bring about a stronger core to EVE Online, fixing one of its iconic features and playstyles of the thousands of low sec pilots who would love to cut their teeth on more meaningful faction warfare, as well as open up the sandbox for player iteration once again in ways that affect not just the player empires, but those shepherded by CCP Games themselves as well.

Call me cautiously optimistic, but EVE: Uprising's promise has me excited to jump back into New Eden again, ready to try my hand at being on the right side of some killmails this time.