Embers Adrift just launched and we’re here to give you our first initial thoughts of gameplay (as well as a little sass – that’s complimentary). If you haven’t heard of Embers Adrift yet, I don’t blame you. It’s a new fantasy MMORPG that has been brought to life by only a dozen or so creators over at Stormhaven Studios. That is a massive undertaking and a breath of fresh air in today’s MMO climate. But as exciting as an indie MMO is, has team Stormhaven brought a game worth playing to today’s market? Buckle up because we’re diving into Embers Adrift.

To begin, let’s look at what Embers Adrift hopes to accomplish with their product. From their FAQ: “Embers Adrift is a PvE MMORPG focused on group-based gameplay, exploration, and community. Inspired by experiences in tabletop games and early MMORPGs we aim to build a unique experience in today’s MMORPG market. Come discover a new MMO world made by gamers, for gamers; a world filled with mystery and challenge that brings players together to forge great memories and new friendships. A place where you can give direct feedback to the devs and know they're listening. An MMO you can call home.”

Embers Adrift is really looking to put forth that group experience, which is a nice idea. While it may seem like a no-brainer, a lot of mainstream MMOs have lost that touch with queue finders for dungeons or stories that can be completed entirely solo. But before you can even attempt to group up with other players, you’ll have to create your character.

Character creation is a little…bare, but it does have a few surprises. You play as a human and can select several different body types. If you’re tired of chainmail bikini summer bodies and want to see more dad bods in games, then you’ll probably really like this feature. There are three parts of the hair that you can customize to create an entirely different look, but the pieces you can select from are currently limited. I haven’t seen a game which lets you build your own hairstyle (aside from BDO, but that was more sculpting) so that was a pleasant surprise. I think that idea has a lot of potential once they add more customization and options. Other than that, you have skin, eye color, and height scaling. Oh, and your face paint color matches your underwear and clothing. Those things should definitely be separate, in my opinion. If my body can look like I can inhale a palette of zebra cakes and make it through the winter, I should be able to proudly proclaim to the world that I do not have my life together enough to coordinate my war paint with my underwear. Art imitates life. 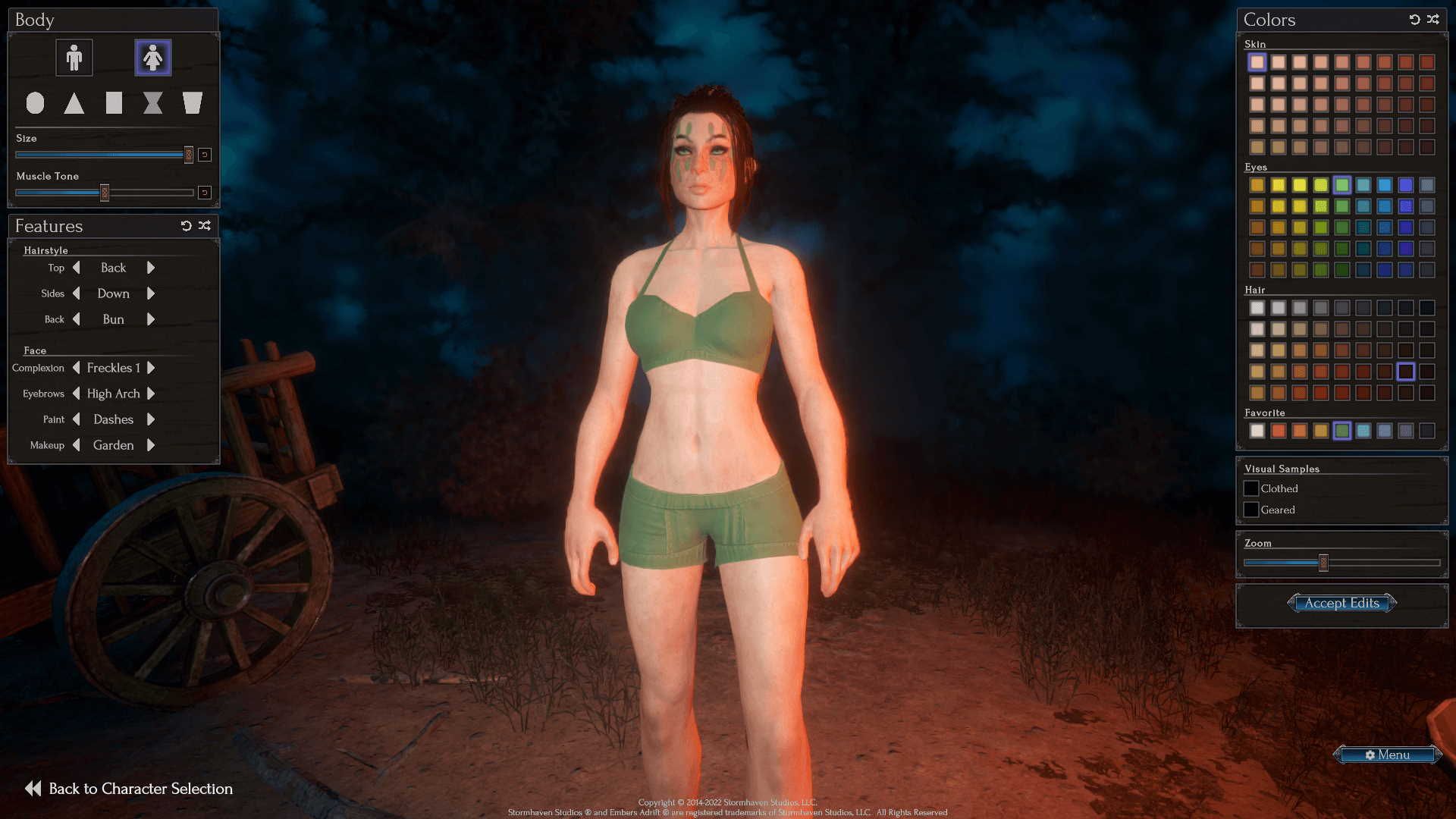 With your character customized, you can choose a class. The big three, baby: Tank, DPS, or Healer. To get a solid idea of combat, I decided to go with DPS. When you create a character, you get to see them situated around a campfire, or an “Ember Ring”, and when you create more, those characters will also stand around the fire at the character select screen. Very diablo-esque. I like it!

When your adventurer finally leaves the warmth of the embers on the character select screen, you emerge from the darkness on the road to Newhaven. After a few helpful tips for newbies, you can go talk to the various NPCs standing around the small camp. The first thing I noticed is that there aren’t any visual indicators for quests: both available to pick up and ready to turn in. To know what to do in Embers Adrift, you’re going to just must talk to everyone. Anyone and everyone can have a quest. You’re also going to have to do a fair bit of reading. 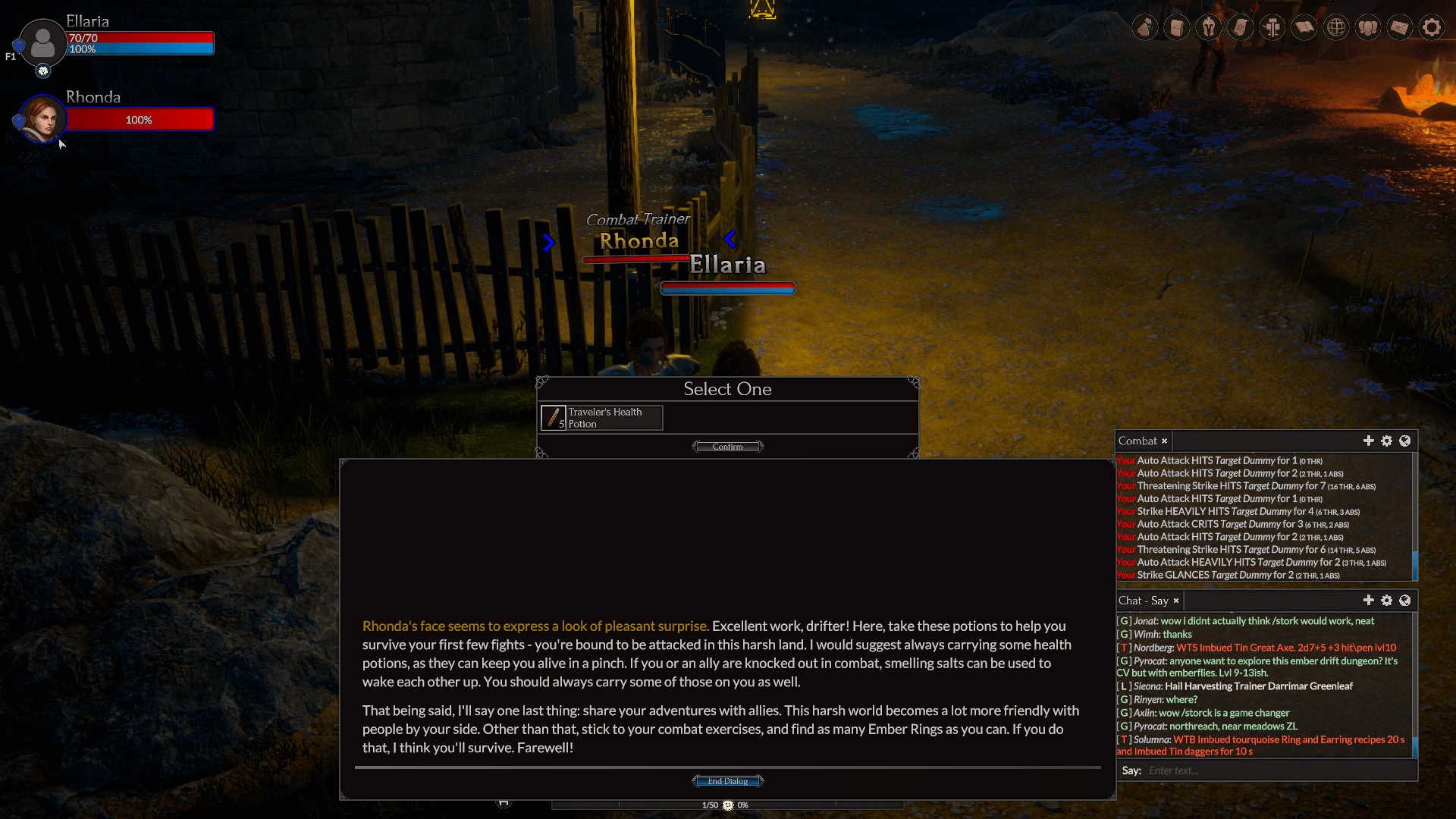 With no voice acting, you’re greeted to a fair bit of dialogue every time you hold a conversation with an NPC and you need to read it to know what to do next. Thankfully, there is at least a quest journal to reference the quest later if you log on and forget what you had done the previous day. The writing really isn’t that bad, and when I wasn’t feeling impatient, I enjoyed reading and immersing myself in some of the lore and quest text. With that being said, I wish the UI was a bit less modern looking. There’s something about the design that is off-putting for my eyes when it comes to parsing through a lot of text. I do like having a history of text available, but everything in one giant box is just a lot. Giving the dialogue in shorter bursts that you can click through and having the option to go back and read prior text in another window would have helped remedy that. 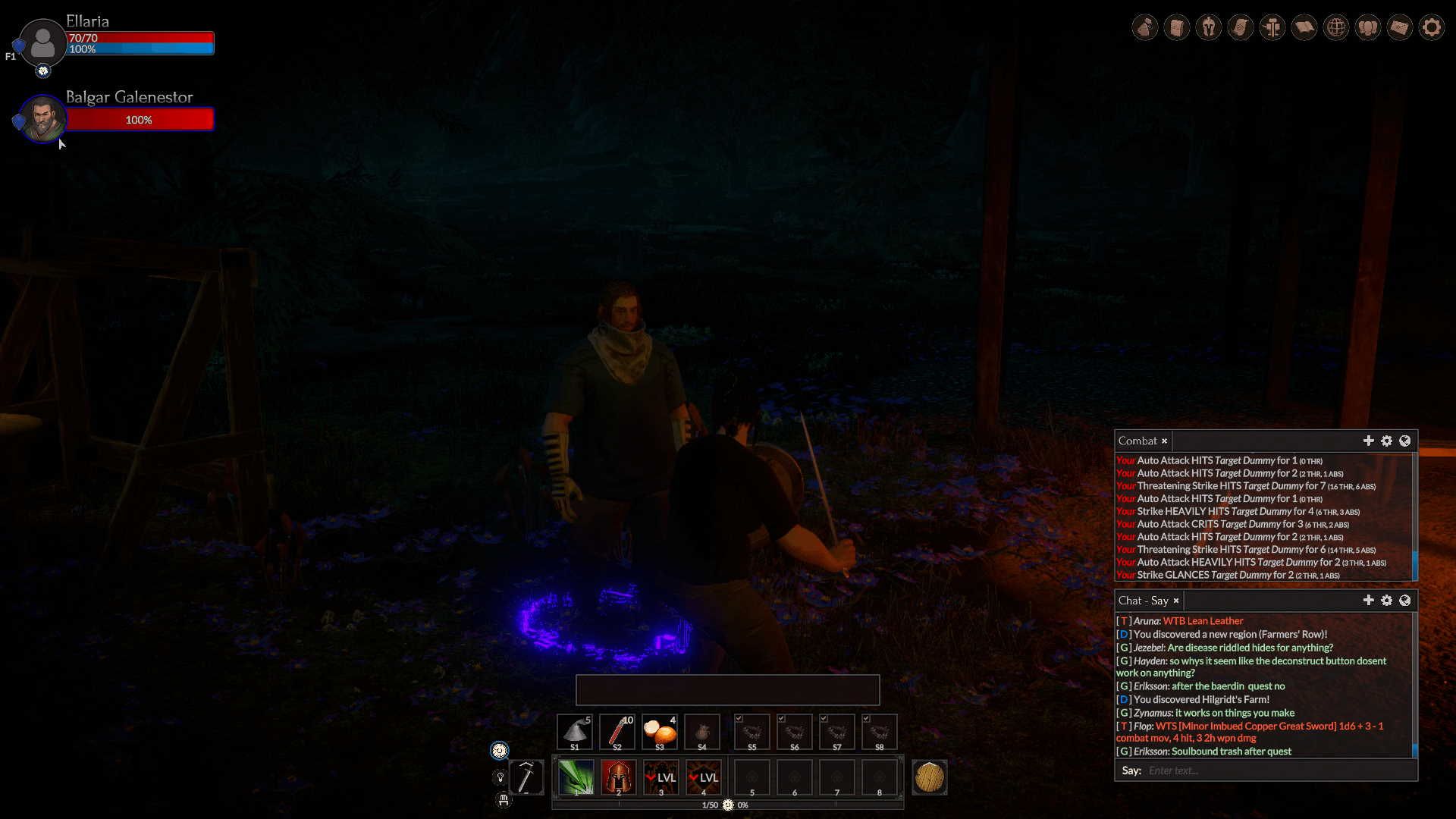 The further I go along in Embers Adrift, the more I get the feeling that this game isn’t meant to be rushed. Combat feels painstakingly slow, because there is a fairly short delay between pressing a button, waiting for a castbar, and a character executing the skill or action. I do like that your weapon has damage based on a die (for example, my sword has 1D3 damage) and that it is slightly randomized every time, but I would like to feel that tabletop aesthetic just a bit more. If that’s what you’re going for, really lean into it! The only way I even knew that it was linked to a die was by hovering over the weapon tooltip. Without any chat or visual indicator of a “roll”, it didn’t feel like I was rolling a die to attack. It felt like more of an easy way to shoehorn in that “tabletop experience” without quite fully delivering on it. Maybe if the text was “rolled…to attack” or there was a little D20 visual behind the number it would’ve clued me in.

In addition to slower combat, movement does feel slightly off. I don’t know if it’s because our character movement is too slow, or if the points of interest are too far apart, but I immediately felt the pain that comes with trying to traverse this new world.] 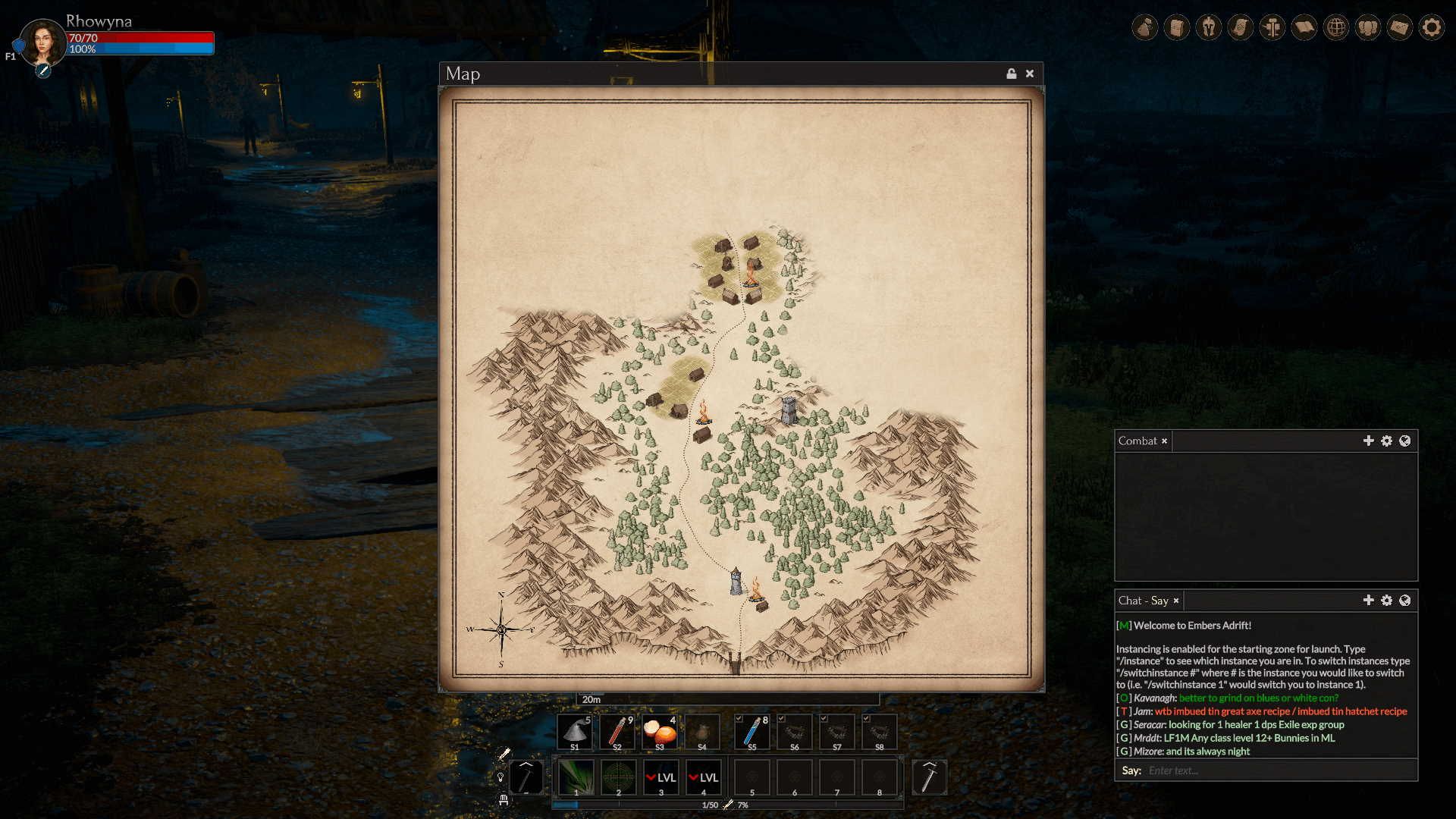 Now, the map. I’ve played enough tabletop games and created far too many of my own maps to know that they used Wonderdraft to build the in-world map. I don’t even really have an issue with this, it just made me chuckle. My real problem comes with the lack of information available about your location. If you want to navigate this world, you must get really familiar with your surroundings and landmarks and know that the planet in the sky is always due North. Unfortunately, I had to find that out from other players instead of organically in-game. 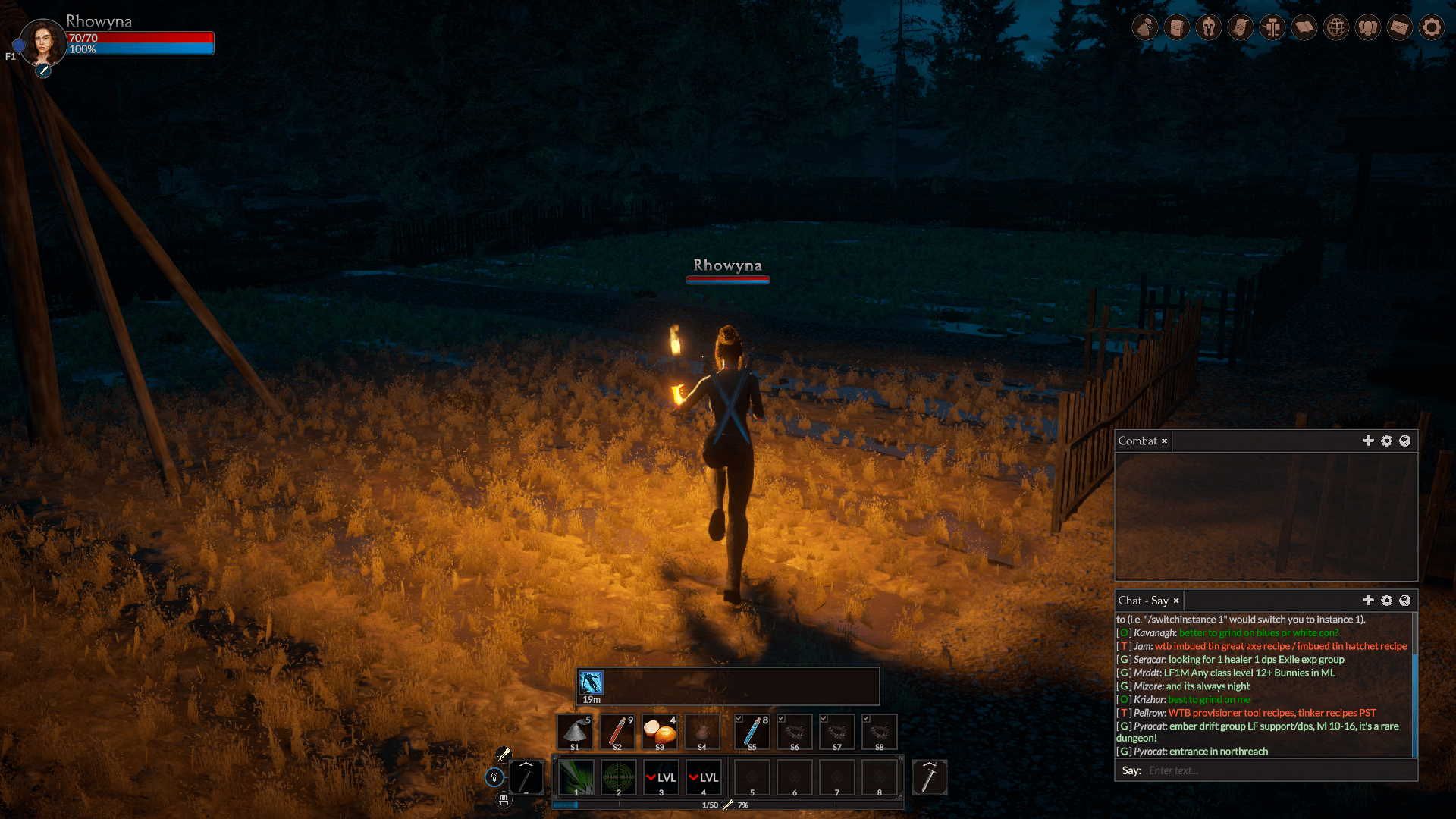 With that being said, I did grow to like the map. I like having to look around the world to know where I am. I didn’t think I’d like a static map, but that’s how we would get around in a tabletop game, right? If that is how it’s intended, I do think the world needs to be fleshed out just a bit more with more points of interest and landmarks. As large as the world is, it still felt a little hollow. But, maybe that will change as I level up and experience other areas. Stay tuned for our full review of Embers Adrift!