For some, 2021 has been the year of MMOs. For others, it has been yet another year of disappointment. With each new MMO that is released, they grasp tighter onto the days of old, refusing to believe that anything new can be as good as what has come before. Elyon could very well be another victim of that thought process; only time will tell.Since the new MMO launched, I’ve put about 20 hours into Elyon, and so far it’s been a good time. However, time will tell whether or not it’s one that will stick around, or be another passing world for the genre.

There’s been some jockeying for position with MMO releases over the last couple of months. Elyon’s developer Krafton and publisher Kakao Games had already announced a September 29 launch date when Amazon Games pushed their release of New World from August 25 to September 28. In what I consider an unsurprising move, Krafton quickly pushed the Elyon release date back another month to October 20. The interesting piece of that move was the switch from a buy-to-play monetization model to free-to-play in an attempt to entice more gamers to give Elyon a try.

According to SteamCharts, at the time of writing Elyon is sitting at just over 15,000 players, with an average of almost 10,000 since launch. That is just a fraction of New World’s current player count (506,000). The Elyon player count is only for the Steam version, but even if double or triple that number downloaded Elyon directly from the Kakao website, it’s still not looking like the launch delay and switch to free to play had a significant impact on player counts. We’ll have to wait for official word from Kakao and Krafton before we know for sure.

Regardless of the actual player count, the Headstart and official launch of Elyon have gone fairly smoothly, at least for the North American servers. I haven’t encountered any queues to get into the Cassiopeia server, but a third server was added to the EU region to help alleviate queues. There have also been some lag issues as the servers strain to process World Events and RvR battles, so they have been temporarily disabled until the lag can be taken care of during the scheduled maintenance on the 27th.

As I already mentioned, I have only had the chance to play a little over 20 hours at this point, so I’m still a long way from making a final decision on whether Elyon could become my go-to MMO for the foreseeable future. That said, so far I’ve had a lot of fun playing the early levels. Progression through the early levels is extremely quick. Even if you like to listen to the voiceovers and read all of the quest text, reaching level 30 in a couple of hours is still an attainable goal. I was able to make it into the mid-30s by simply completing the story and region quests; no mob grinding was necessary. Even when I fell short of experience to go from level 35 to level 36, it only took a few minutes to redo a few quests to get the XP needed to advance.

Reaching level 30 took very little effort, but it’s not because of bad design decisions on the part of Krafton. The current mentality of most MMO players is rush, rush, rush. Creating more quests than necessary is perceived as an attempt by the developer to artificially extend playtime without any real substance. Many long-running MMOs like Final Fantasy XIV and Neverwinter have felt the wrath of players over this exact issue, and have gone as far as removing the extra fluff from the early level grind.

Taking heed of current player preferences, the first 30 or so levels in Elyon serve more like a tutorial and introduction to the story than anything else. You aren’t even introduced to other activities such as gathering, crafting, running dungeons, PvP, and all the other MMO trimmings until you are in your 30s. I personally found this to be a streamlined way of keeping me focused on getting to the “good stuff” before I got too distracted with tasks other than combat.

Line ‘em up and knock ‘em down.

So far, I’ve played some Gunner and Slayer, but the Mystic class has caught my attention for the moment. All three of the classes (and I’ll assume the remaining classes as well) are capable of crushing all of the solo content that I’ve experienced so far. Even without the Mystic’s most powerful spells, its combination of mobility, stuns, and area of effect damage spells feel a little overpowered. Unless something drastic happens, I don’t expect that to change at the higher levels. It isn’t about the monster’s hit points, either. Turning enemies into damage sponges wouldn’t make combat any more enjoyable, it would just extend the time of each encounter by a few seconds.

Making combat more challenging would require more diversity in how monsters attack. Currently, almost all of the creatures make a beeline straight for an attacker, making it extremely easy to gather them into large groups and then quickly kill them with a couple of AoE attacks. When there is a ranged enemy, they do very little to keep their distance, allowing you to pull all the other creatures right to them. Even the stronger enemies, identified as leaders, are slow to attack with any special moves, making evasion quite simple. While I’m all for making the push through low-level content quickly, I can see how this easy-mode combat could be a turn-off for some.

Just because my overall experience so far has been positive doesn’t mean that everything about Elyon is rainbows and unicorns. I am generally a big fan of gathering and crafting in MMOs, but the thought of doing some serious crafting in Elyon is nothing short of painful. In a decision that I consider a positive, there isn’t any mini-game associated with crafting. You go to a workbench, pick a recipe, set the quantity you want to make, and press start. That’s fine. 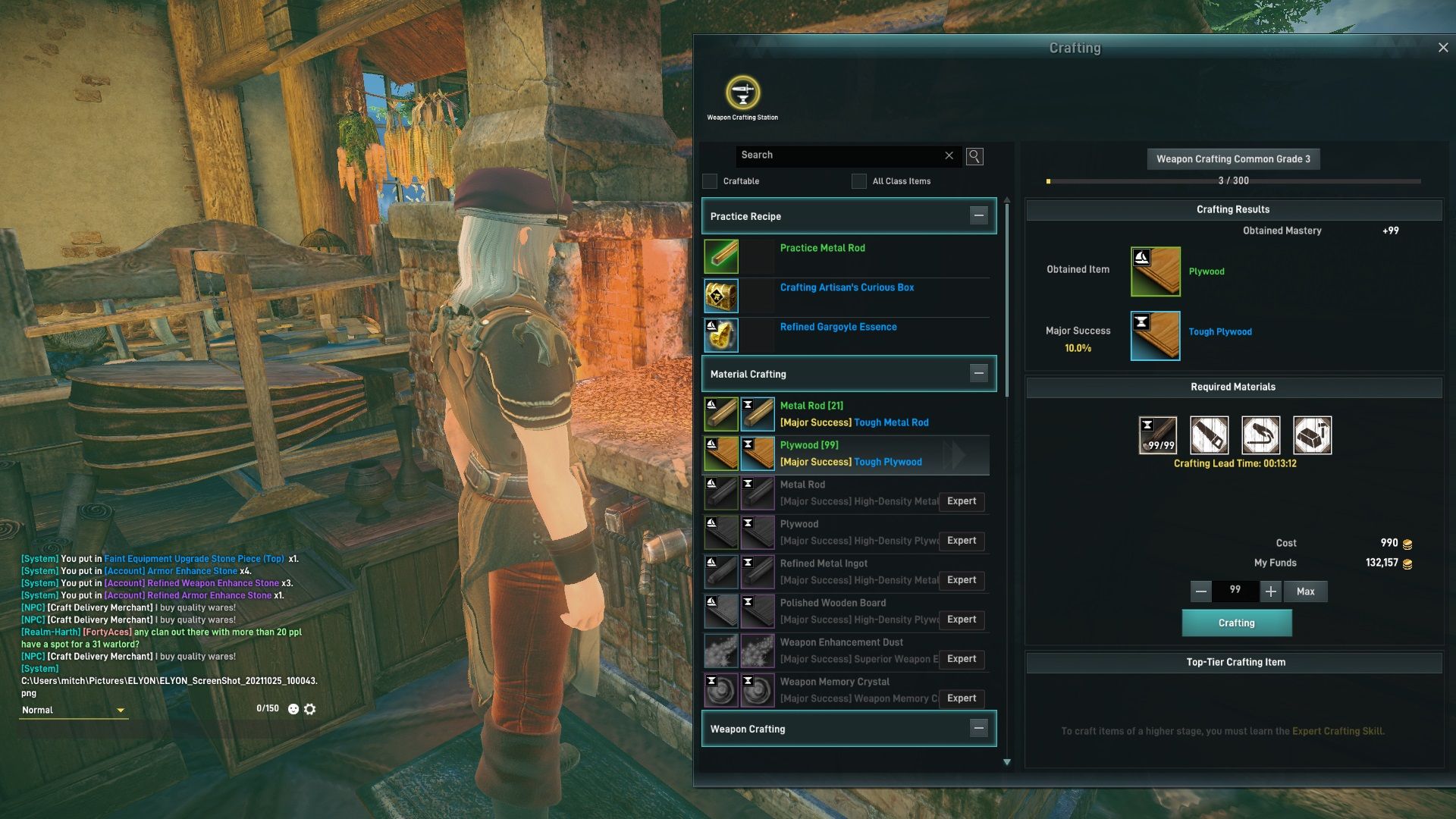 Is crafting really worth the time?

The issue I have is the amount of time it takes to make anything. The first weapon I can make requires 10  tough plywood and 5 tough metal rods. Each of these is the result of a major success while crafting the base plywood and metal rods. At a 10% chance for a major success, that means I would have to craft 100 plywood and 50 metal rods to get the necessary resources for my weapon. At 8 seconds per craft, that means it’ll take about 20 minutes to craft the resources for a single item! And that weapon isn’t even as good as what I’m already using. I’ve barely scratched the surface of crafting, and I assume there will be ways (other than buying materials) to speed up the process, but this doesn’t sound fun to me. Maybe I’m missing something?

Gathering is a little better, but it comes with its own quirks as well. Along with gathering from resource nodes out in the wild, once you gain access to housing, you can add nodes on your personal plot. These are a set it and forget it type of thing, so every hour or two you can pop in, harvest and replant, and pop back out. Simple but effective, yeah? 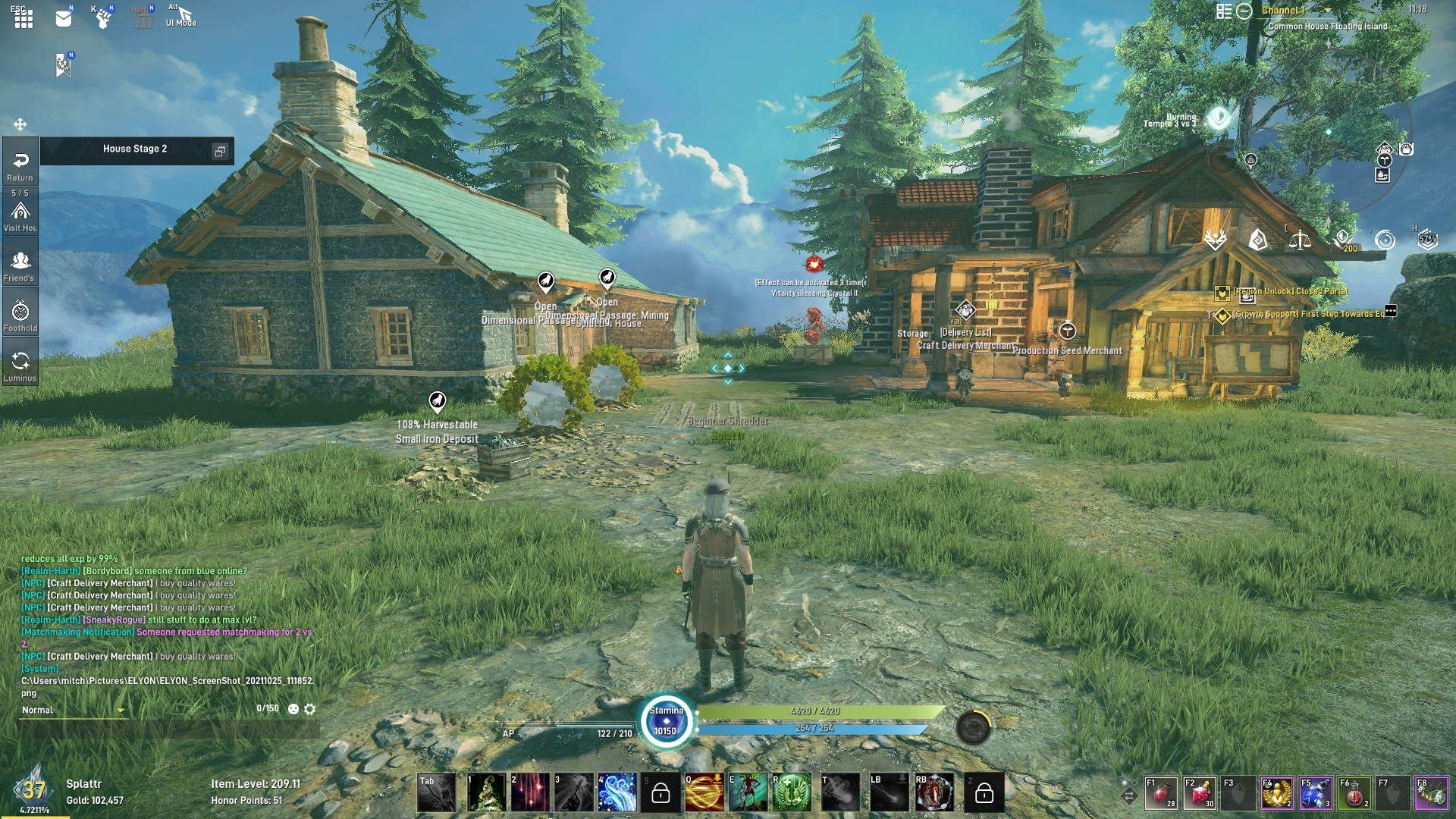 It’s not much yet, but this house and workshop are a start.

During your adventures, you’ll also be rewarded Dimensional Seeds. When planted, these special seeds will produce a portal to one of two different mini-games. Neither game is any fun, and I didn’t want to repeat them after the first time. However, they only take a couple of minutes to complete and they provide a fair amount of resources for the amount of time required, so they are unfortunately an evil I will have to endure. It would be so much simpler if the Dimensional Seeds just gave a higher yield than normal seeds and we left it at that.

Those are just a couple of the issues I’ve come across so far. Others, like being told to pick a guild during one of the main quests, only to find out that leaving that guild after the quest was completed has locked me out of choosing another guild for 50 hours, are a nuisance but not really a game-ending problem. I’m sure I’ll find other things that detract from my enjoyment, but hopefully, they won’t outweigh the fun I am having.

Mini-games never end up being a good idea in an MMO.

I would be lying if I said my time with Elyon has been a ground-breaking experience; I haven’t come across any game mechanics that I haven’t seen in other MMOs. But my time leveling has been fun, something I can’t say for many MMOs in the last five or six years. With so many systems being a rehash of what’s come before, I can’t really put my finger on what it is that has made Elyon so enjoyable. If someone pressed me for one specific reason they should give Elyon a try, I would have to say that so far the pacing has been on point. Will I be able to say that after another 20 hours? 50? 500? I don’t know about that last number, but I’ll be back in a week or two to let you know whether Elyon lasts past the honeymoon period or not.