As I took out the last scavenger at a station in Luyten's Star, I slowly made my way back to my Cobra parked on the landing pad a short jog away. The alarms had been triggered in the base I was leaving, though no one alive was left to answer the call. However, two gun turrets pointed towards the landing pad, poised to take me out if I crossed their line of sight.

Luckily I could disable the turrets with a well placed charge, leaving the pathway clear. As I climbed into the cockpit of my Cobra, ready to leave the settlement, my shields started to fall. I forgot to disable the anit-aircraft defenses. The base, devoid of life but still on alert, bombarded my ship with ordinance as I eased into my fate. I would fail my mission and redeploy at a nearby station, ready to start the cycle again. This was my experience early on in my playthrough of Elite Dangerous: Odyssey, the latest expansion of the space-faring MMO from Frontier.

The main draw of Odyssey is the boots on the ground, first person gameplay. Elite has always been first person, but you've been relegated to staying in your ship, never getting up to stretch your legs, have a drink, go to the bathroom. However, with Odyssey, the stations we've come to love docking in now allow for players to walk around, engage with NPCs, take in jazz at the bar or meet up with other Commanders along the way.

Odyssey is, by its very nature, one of the more ambitious expansions I've come across in recent memory. The team at Frontier are effectively creating a whole new game and adding it into the existing framework of Elite Dangerous. First person combat, as well as a new exploration minigame add to the overall Elite experience, truly untethering players from the metal boxes that we've all been flying around inside of for years.

The rush I felt the first time I walked into Abraham Lincoln, one of the stations orbiting the Earth, was insane. It was as if a whole new game opened up to me. NPCs filed around the concourse around me, minding their own business. Mission agents called out to me, asking if I'd like to make a few credits to help them. Seeing the NPCs in front of me instead of just text and picture cards on a screen in station services added so much life and realism to a game that I've enjoyed immensely over the years.

The scale of everything just reminds me too of how large the galaxy is as well. Standing next to my Cobra, Eagle or even hopping into a friend's Anaconda just reminded me of how insignificant I was in the grand scheme of things.

It's definitely not perfect, however. NPCs, while feeling more alive than their text-based counterparts, still are devoid of real personality. Many times it seemed as though it was the same character models just in different clothes. The voice acting is good and sells that you're talking to a real person, even if that person is just an NPC, but there definitely needs to be more these models can do aside from just stand in the same spots on each station. 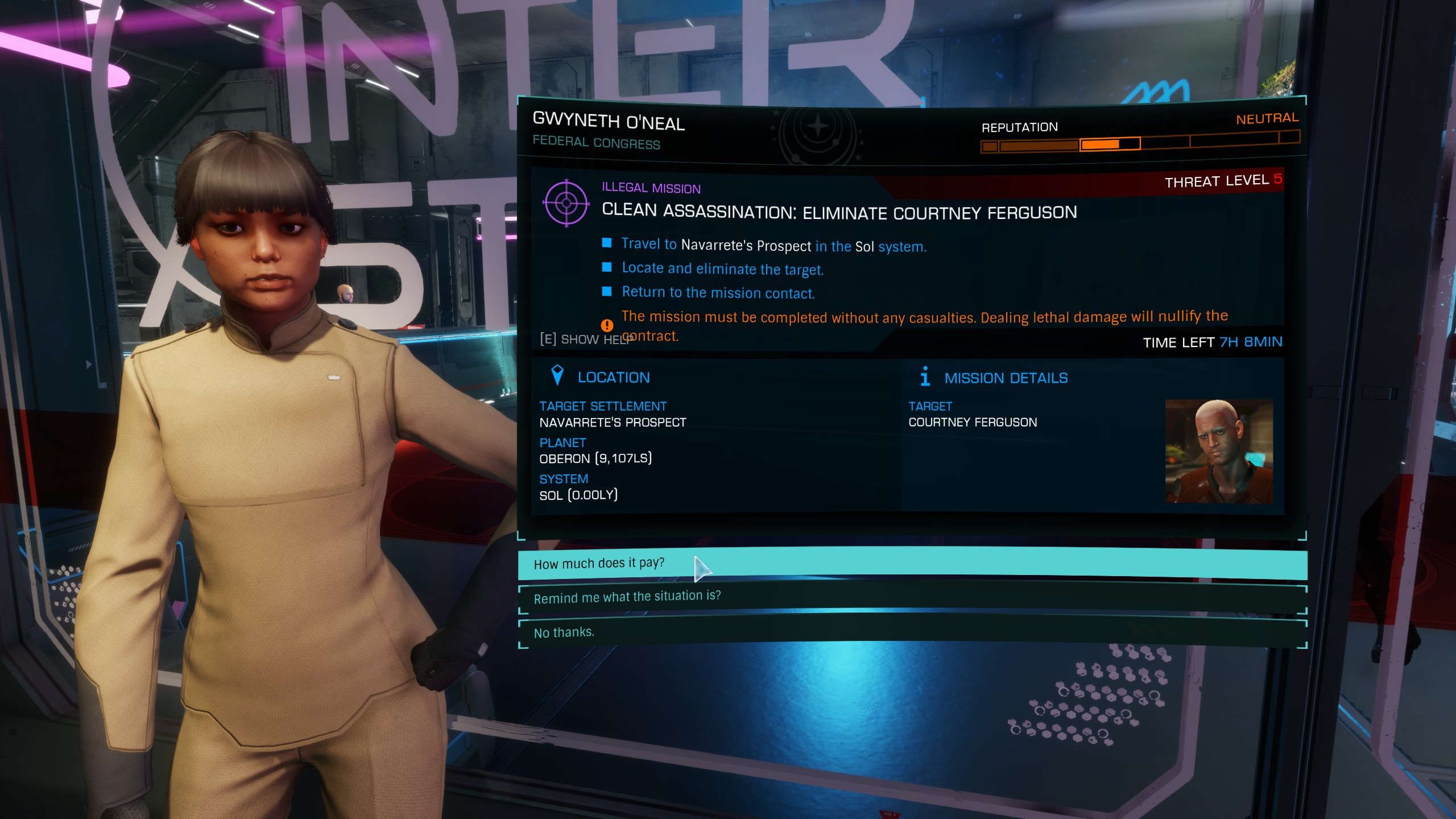 The interior of the stations themselves don't have much variety, and it makes some sense. There aren't too many orbiting station types in Elite Dangerous, so you have to think they all had the same interior designer. I would like to, however, see a bit more design differences, letting you know you're in a different station other than just the name change plastered on the walls.

Thankfully, everything you can do in station services from your ship, you can do in station as well, as well as a few things you can only do on foot, such as buy weapons, suits and more. Different suits are suited to different tasks, such as the Dominator being more a combat oriented kit, versus the Maverick which can be used more for infiltration by cutting into locked down panels. You can upgrade your suits and weapons, as well as buy consumables like grenades, shield projectors and more.

Where Odyssey really gets going is when you embark on a mission. Flying and landing on a planet's surface still hasn't gotten old from the Horizons days, and it's made all the more special when you remember you can leave your SRV behind and carry on going on foot.

Getting out of my ship in Horizons in my SRV was an awesome experience the first time I was able to do so. Roving around a planet or a moon, the sun cracking the horizon, while I searched for minerals has given me hours of enjoyment. Taking my first steps on a planet or moon - such as Jupiter's Ganymede - was transformative. Walking  - walking - on one of Jupiter's moons was something that I've wanted to do ever since I booted up Elite for the first time half a decade ago. Letting loose the shackles of my spaceship to explore on foot is an experience I was hoping we'd eventually have in Elite.

However, it's here where I and my squadron encountered the most issues.

If there has been one phrase that has captured the essence of my Elite Dangerous: Odyssey experience thus far it would be Orange Sidewinder. This error spelled the death of any and all fun myself and my squadron were having, as almost without fail warping into a new system would be met with this issue. If we got lucky and were able to warp into the system, we'd encounter it when leaving orbital flight. Oftentimes myself and two others would find ourselves not instanced, even if we were all in the same spot and in a team (the new word for Wing). Trying to leave and come back to reinstance? Chances are you'll be met with an Orange Sidewinder. 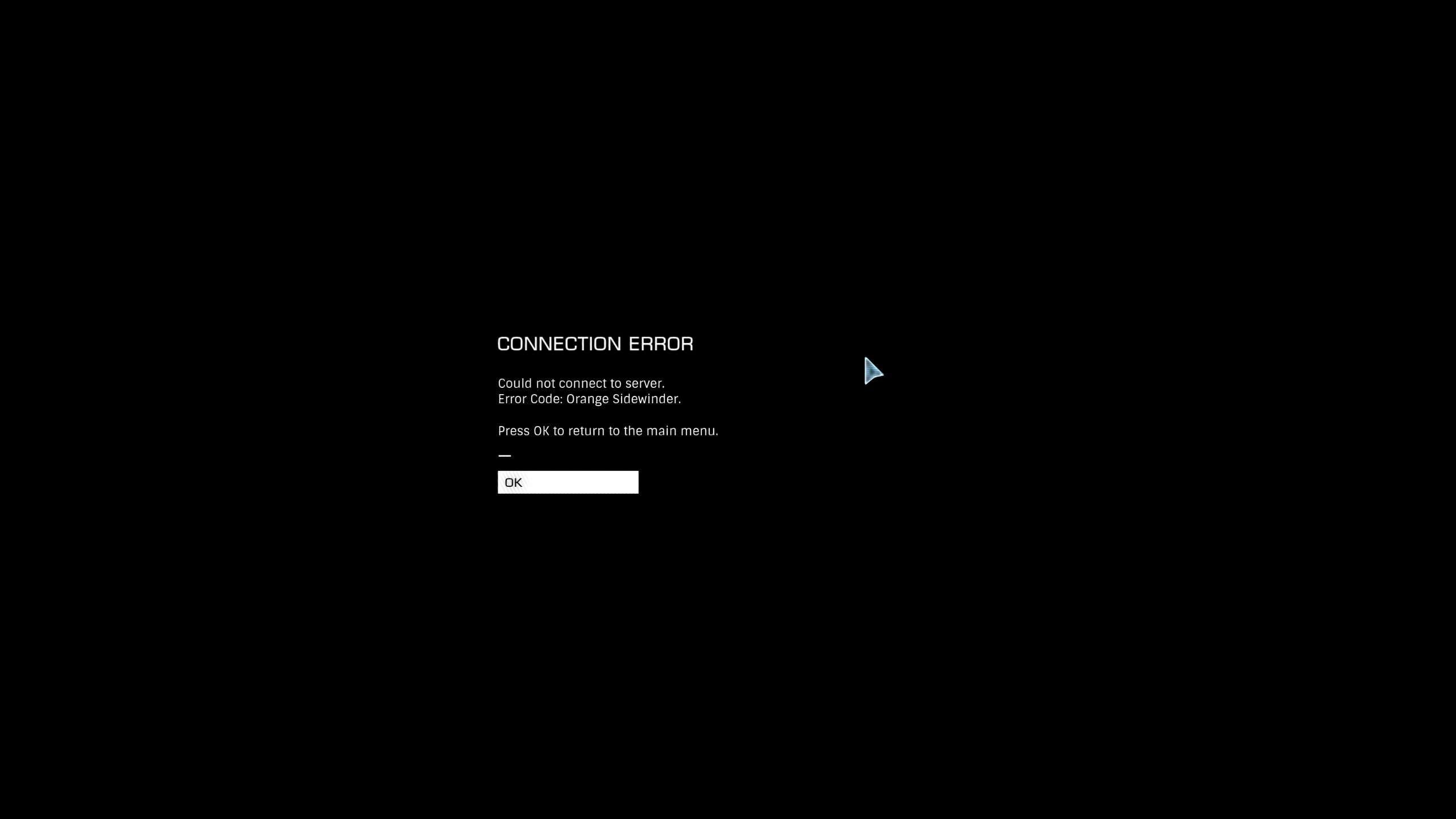 It starts to reveal the very real cracks in Odyssey. In a game that celebrates playing solo as much as they do a group, playing solo seems to be one of the only real surefire ways to actually play Odyssey, at least for me. When by myself in our private session, I have next to no issues with connection. However, the minute my friends join and we try to play Elite together like we have for years, we're beset with issues.

Odyssey, when it works, can be transformative. Looking up from a planet's surface and watching my friend land their Anaconda is an amazing spectacle. My friend then disembarking and lining up beside me to infiltrate a base brings a whole new element to Elite that I've craved for years. However, missing from that is the four or five tries it took just for the instancing to line up in order for me to even see he was landing his ship. Missing from that is the fact that we are all running independent missions because we can't share on-foot missions with our comrades. There are no emotes, no way to easily ping the terrain in front of us to more easily coordinate as we explore the worlds ahead of us. Gunplay, while serviceable, isn't as solid as I would have hoped.

Odyssey also suffers right now from poor performance across the board. Using my i7-10700K, 32GB DDR4 RAM @ 3600MHz, as well as an RTX 3080, I feel lucky if I get 60 frames per second while exploring the inside of bases at 1440p. Inside of stations I've seen framerates from 31 fps up to 90, though there doesn't seem to be any rhyme or reason as to the performance problems.

So far I've done mostly combat missions. Exterminate a settlement, assassinate a target, screw up while trying to steal some cargo and having to fight my way out. The mission variety doesn't seem that....well...varied. It also doesn't help that Odyssey seems to be sending me back to the same systems and even the same settlements to do these missions, leaving me to wonder just how robust the mission generation system truly is in the end. Even when missions started to feel routine in the base game, they did at least seem to send me to various different stations and systems, allowing me to more freely explore the galaxy around our solar system.

I'll be testing out the genetic sampler and the Exobiologist gameplay on offer next. Hopefully as we continue our review in progress, Frontier is hard at work fixing the myriad issues plaguing users in Odyssey, from connection errors to performance. Being able to travel on foot is fun, but with all the Orange Sidewinder issues plaguing our gameplay, it will start to become a really lonely experience.

Product in this review was provided by PR for the purposes of this review.