The Elder Scrolls Online made waves this month with its recent reveal of the Gates of Oblivion story for the year, coupled with the announcement of this year’s chapter release, Blackwood. However, for many veteran players, the changes to the Champion Point system took center stage as it will affect end-game progression for the community. Let’s take a deeper dive into this system and see if it will be a major improvement for players.

Along with the first 2021 Elder Scrolls Online DLC Flames of Ambition Update 29 will bring in the new Champion Point 2.0 system. To best understand what this new system has to offer let’s take a look at the current Champion Point 1.0 system and its limitations. Then we can dive into the new system and see if it will provide players with an engaging and fun way to advance their characters once the level cap of 50 is reached. If you are already familiar with CP 1.0 feel free to skip ahead.

In the current system, you begin to earn Champion Points (CPs) once a character reaches level 50. Each CP is added to a pool that has a maximum soft cap of 810 points, any points earned beyond 810 just sit there doing nothing. The total number of points accumulated, up to the soft cap of 810, is split between three Guardian Constellations: The Warrior-Red, The Mage-Blue, and The Thief-Green. Each Guardian Constellations relates somewhat to a stat: Health-Red, Blue-Magicka, and Green-Stamina.

Each Guardian Constellation has three constellations within it, where Champion Points are spent with X number of the stars being accessible. Each star, where you can spend points, has a cap of 100, and as you continue to spend points within a constellation there are tier abilities/passives that are unlocked and applied to the character. One of the more confusing aspects of the CP 1.0 system is that as you spend point in a star there are diminishing returns, creating “jump off points” depending on the stat it is increasing. For example, on my Stamina Necromancer in The Lover constellation, I spent 43 points in Tenacity to increase the amount of Magicka and Stamina restored with heavy attacks by 10.15%, one point less, and my bonus would have been below 10% providing only 9%. If I had spent more points in Tenacity the bonus would have been farther away from that even percentage number unless I boosted up the star with a lot more CPs. Taking these “jump off points” into account for every star, unless you are following an online build guide, could be daunting for players if they want to get the most out of a character build and lead to confusion.

Finally, as you gain CPs and spend them characters receive passive core stat bonuses making them more powerful compared to a fresh level 50 character. The CP pool is also account-wide allowing each character to use the full amount. The CPs can even be spent on characters below level 50, giving those lower-level characters a decent power boost while leveling up. 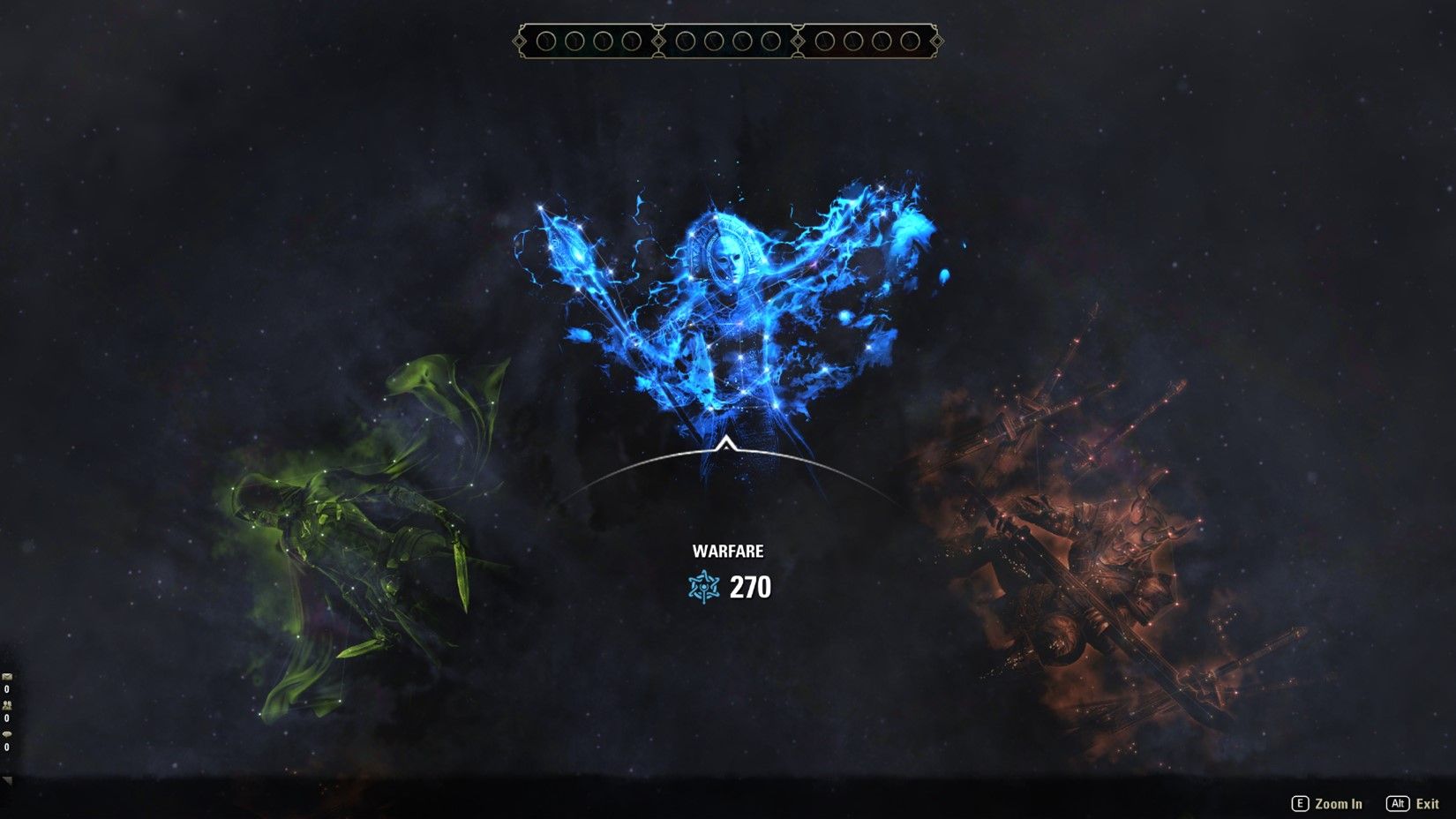 Hopefully, that was clear for everyone, and if you are just joining us after skipping ahead, welcome! First, please be aware that this is all being taking from the PTS and the bonuses are subject to change. Moving on to the new CP 2.0 system the first major improvement is that the CP cap will be increased to 3600. This is great, I have been over the current system’s soft cap for quite some time now and it hasn’t felt like I could progress my character for well over a year, I am now quickly closing in on 1000 CPs in anticipation of the new system releasing. With the new system, there are now only three constellations: Craft-Green, Warfare-Blue, and Fitness-Red. Each one relates by name to bonuses provided in that area of gameplay. The total CP pool a player has earned will still be split between the three constellations. 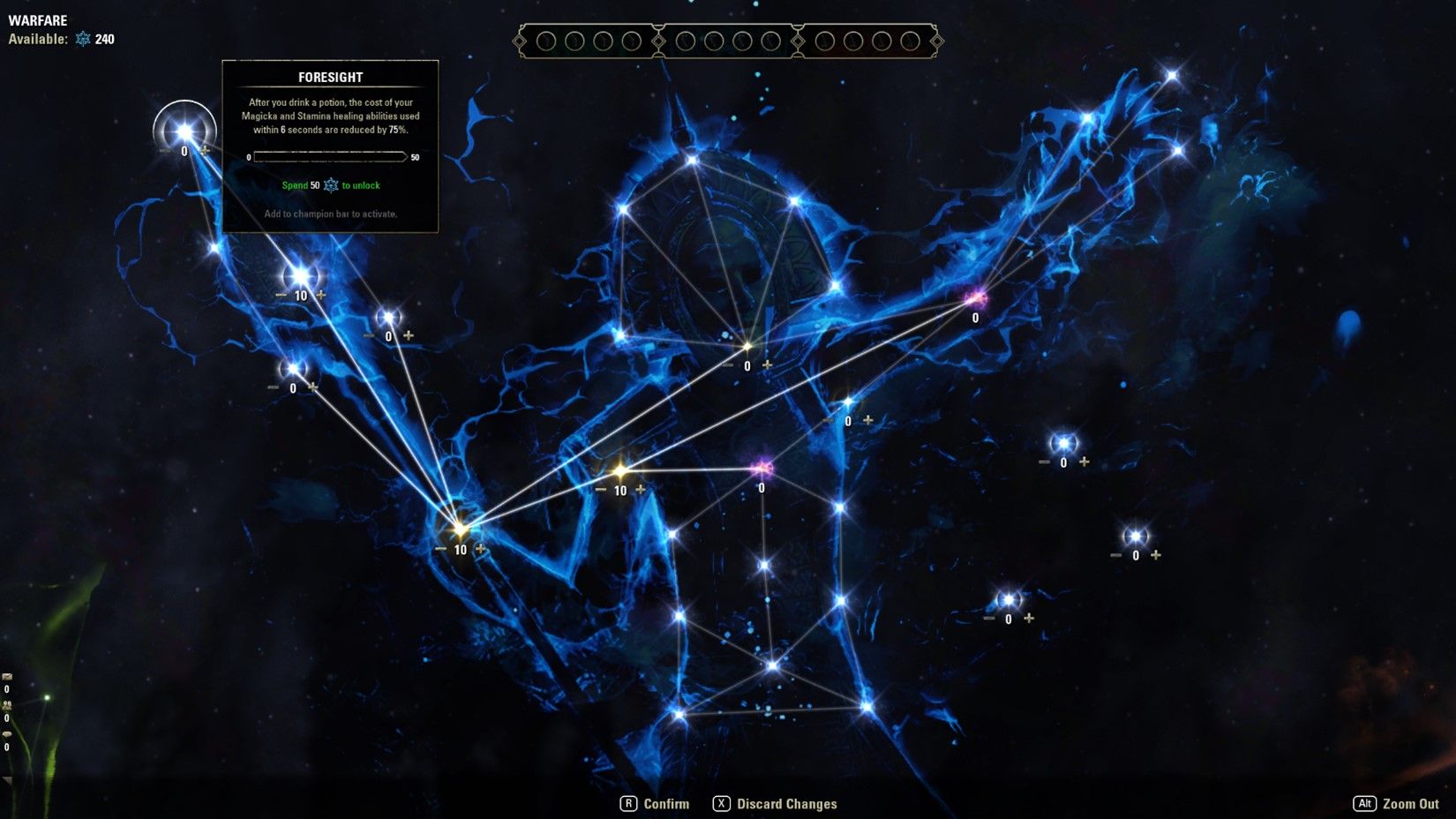 When you first start to spend CPs in a constellation, there will only be a few stars you can access. Depending on which stars you choose to spend points into more stars will unlock. So, planning out what stars are most useful for a build will be rather important as you will have to buy your way towards them. For example, if I wanted to access Foresight, I had to spend a minimum of 10 points on each star buying my way to that node then spend 50 points to unlock the bonus.  You will also notice from the screenshot above that you can eventually spend points on every star if your CP pool is large enough. 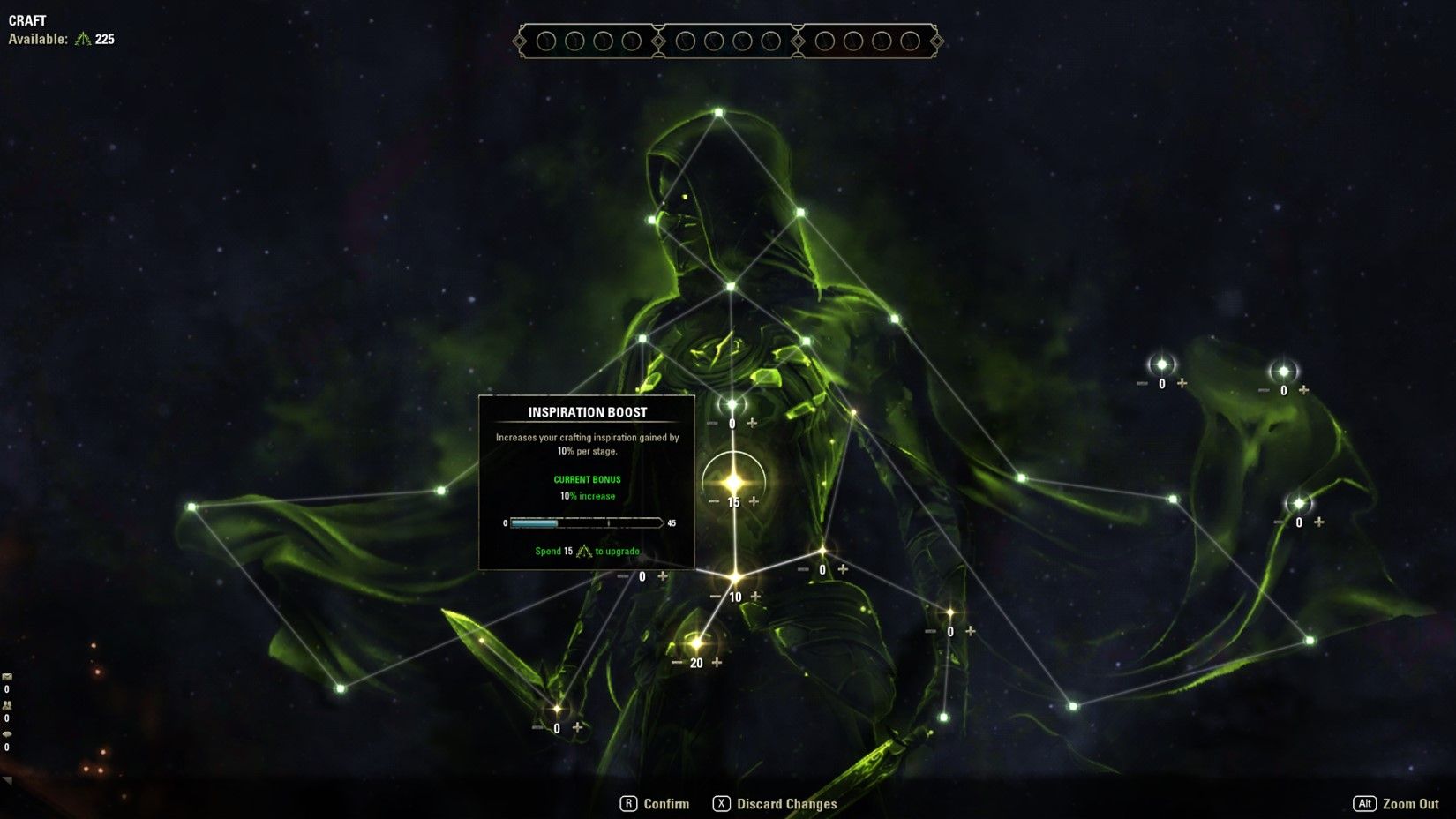 One of the other much-needed changes with CP 2.0 is that you can now mouse over a star to see if it has multiple ranks. This will also show how many points you need to spend per rank to gain a benefit. No more “jump off points” that could lead to confusion for players. While the different stars can vary on the number of ranks and points per rank the bonuses are much more clearly communicated. For example, while Craft: Inspiration Boost has 3 ranks costing 15 points per rank, Warfare: Foresight only has 1 rank costing 50 points. 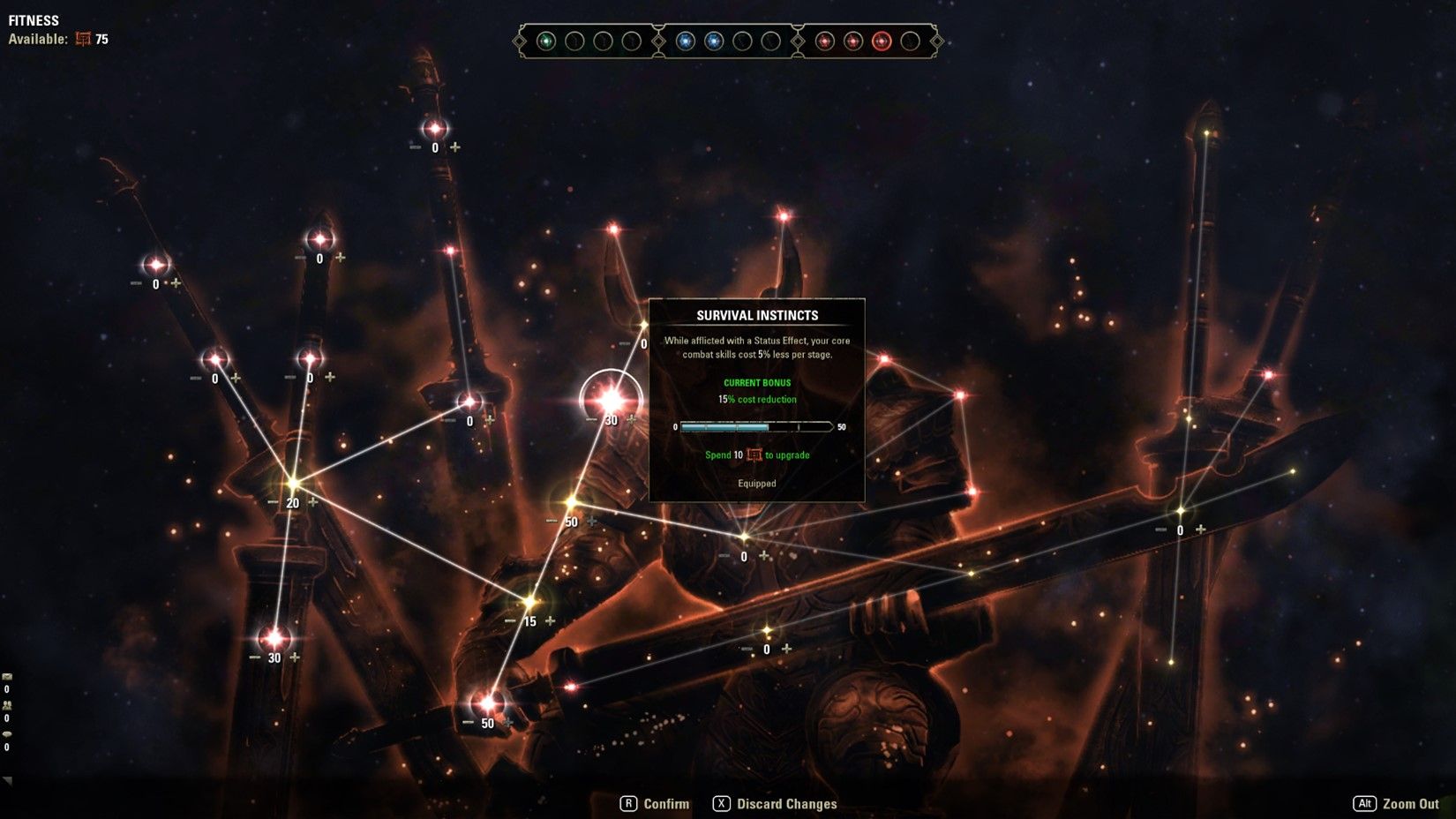 Looking closely, you may have noticed that there are different color stars to spend points on. The different colors play into the new Champion Bar UI element, which you can see at the top of the screenshots. Yellow stars can be found in all of the Constellations. They are passive bonuses, that once purchased, are immediately applied to a character. Whereas green, blue, and red stars correspond to the constellation of the same color. Once one of these constellation stars are purchased, they need to be equipped into one of the four spots available for that constellation on the Champion Bar to be considered equipped. You can change the stars you have equipped at any time, while out of combat, without cost. 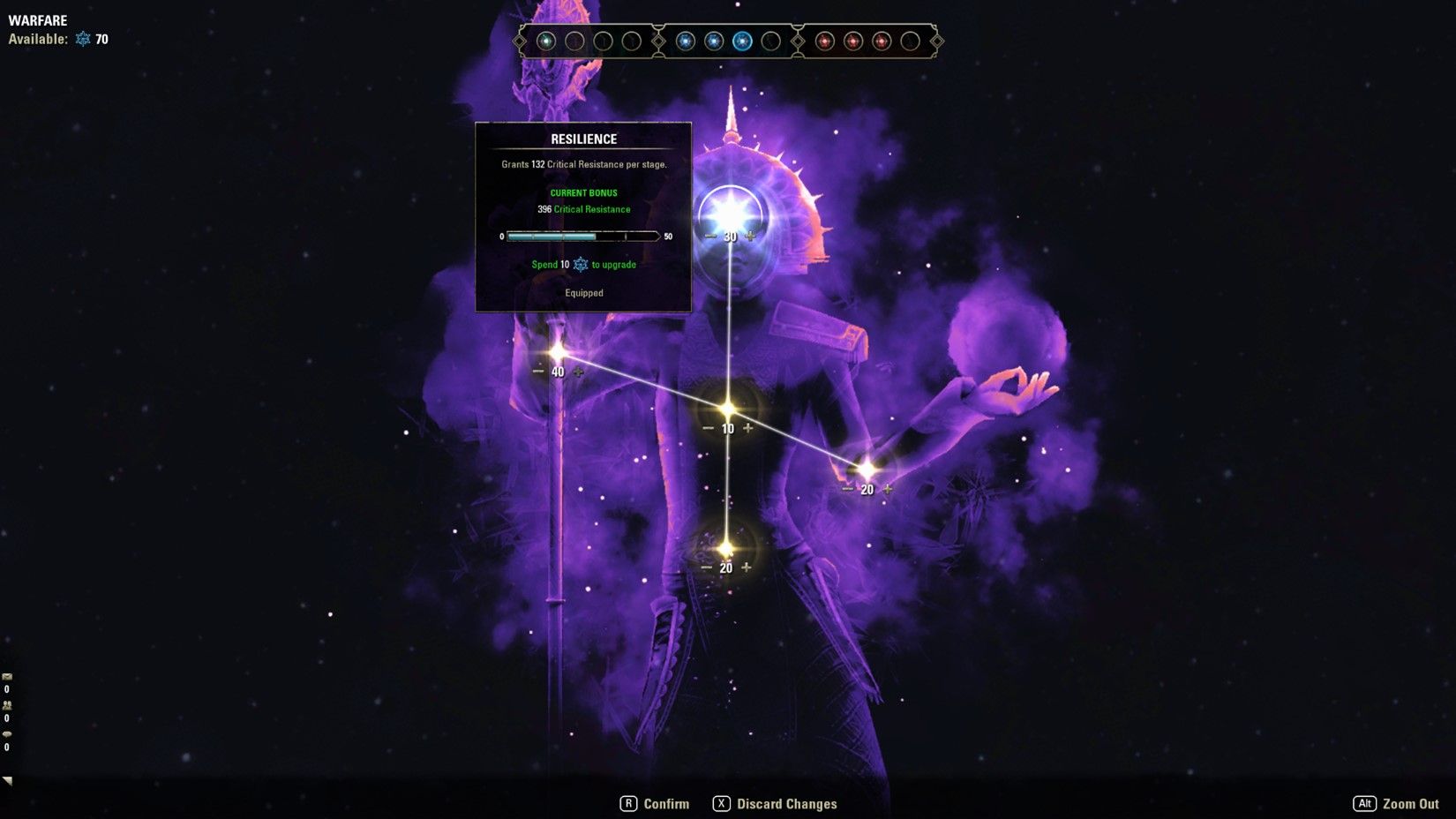 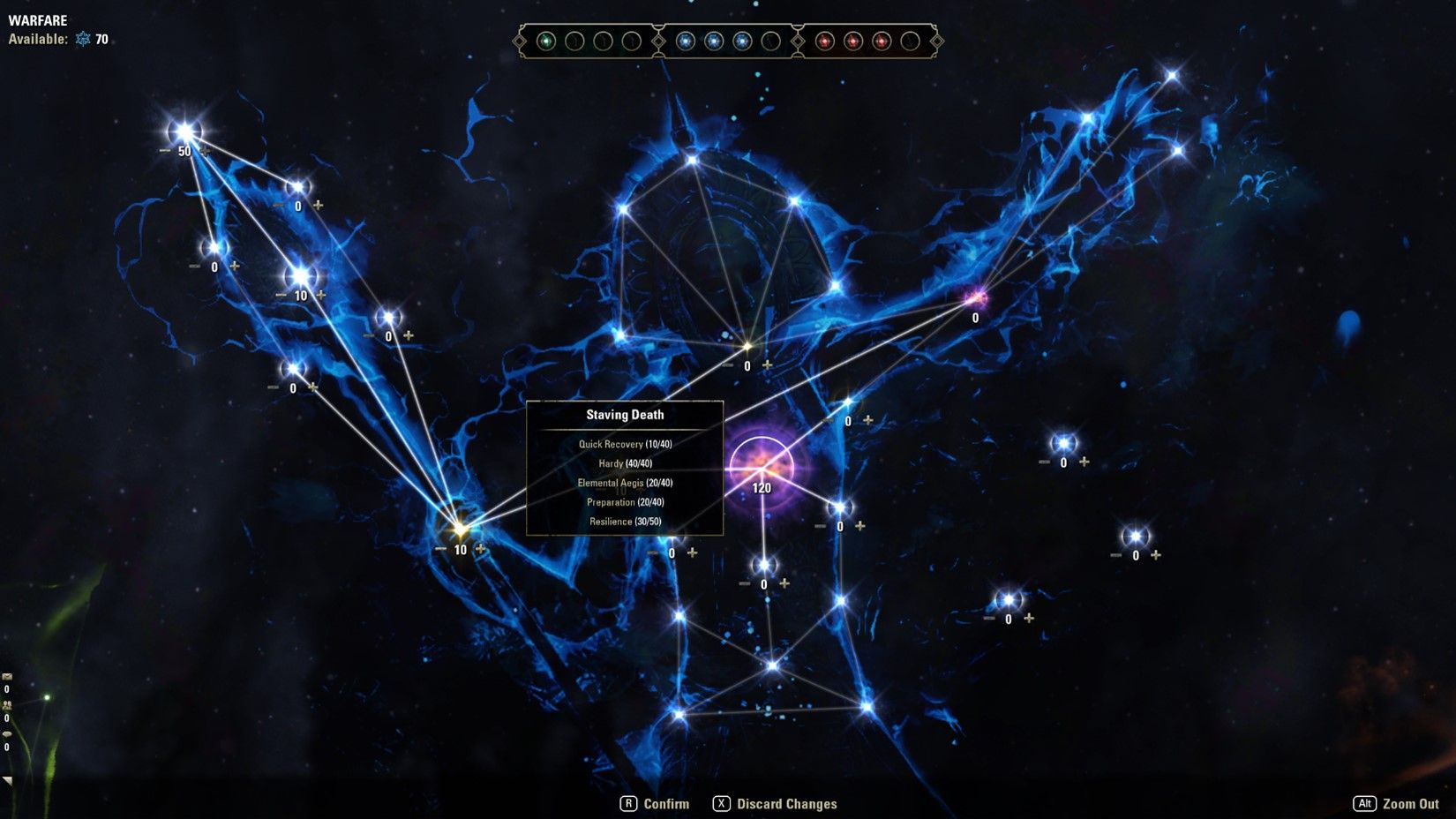 Purple is the final color star introduced in the new CP 2.0 system, and if clicked on a sub-constellation opens up where you can spend yet more of your hard-earned CPs. Initially, there are only two sub-constellations in

Warfare with the CP 2.0 release, Staving Death and Extended Might, both of which have only a few stars that are yellow passives with one blue slotted passive in Staving Death. 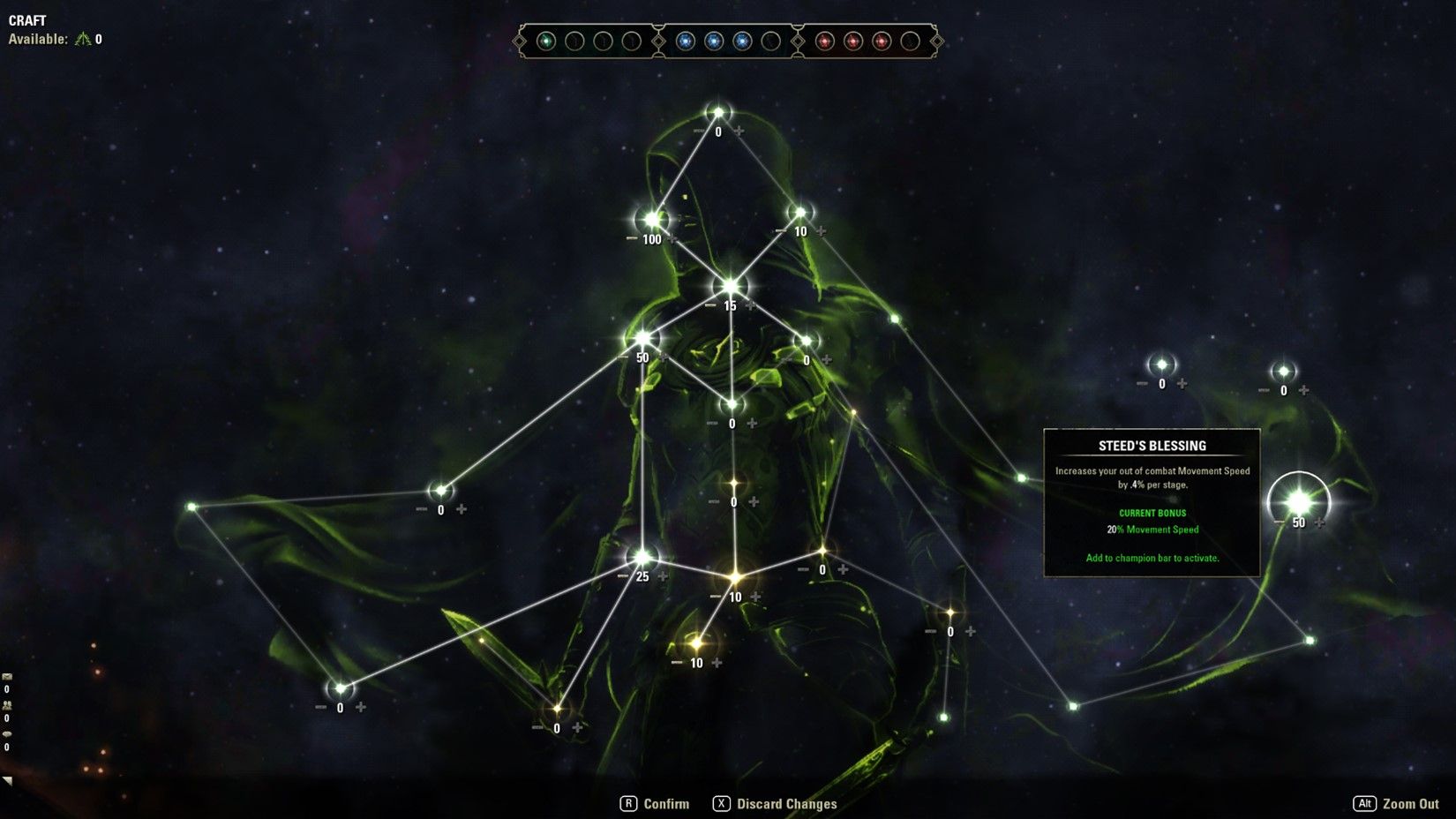 Another change in CP 2.0 is that the requirement to spend CPs for core stat bonuses will be removed, and they will be rolled into a character automatically. Some readers may have also notice in the screenshots some stars are not interconnected. These passives need to be slotted but provide a bonus for each CP spent, each capping at 50 points, as you can see with Steed’s Blessing capping out at a 20% out of combat movement speed bonus.

Well… my initial final thought is that I need more CPs, spending points split among the three constellations with the default max PTS character. I ate up the 810 points total fast. This is not necessarily a bad thing, giving veterans something more to work towards in the long term, even if eventually you are just buying horizontal progression options to slot in the champion bar for different situations. Though I could see it be daunting for some players if they start looking at the new CP 2.0 system as something that needs to be grinded through.

I still have some concerns with only four slots per constellation for the Champion Bar, but I am willing to give it a try and reserve judgment until I have had more time with the system. The Champion Point 2.0 system itself appears to be highly customizable, and I can see the developers adding more to it as needed. While it looks simple on the surface, it could eventually have a lot of depth and will likely lead to more planning on maximizing endgame builds. Overall, the developers look to be implementing a lot of great changes with CPs that were sorely needed.