Jumping into Blackwood, the latest chapter of The Elder Scrolls Online, I wasn’t hit with the same wave of nostalgia as I thought I would be. This isn’t the fault of Blackwood, I don’t think, but rather the fact that in my hundreds of hours in The Elder Scrolls IV: Oblivion, the region around Leyawiin was likely one of the least explored. So instead of nostalgia (which I wasn’t expecting Morrowind like levels, but something), I was actually rather excited to explore something familiar, yet new.

Blackwood, like previous Chapters before it, adds a wealth of new quests, dungeons, delves, bosses and cities to the Elder Scrolls Online landscape. Leaning into the series’ history, we are seeing two cities not seen since previous Scrolls games: Leyawiin from TESIV: Oblivion, and Gideon, last seen in TESII: Arena.

Blackwood also brings with it a major new addition to the MMO: Companions. You’ll have two you can choose between, from the scholarly yet stealthy Mirri to the disgraced noble Bastian. Companions themselves add a new wrinkle in the gameplay, especially if you’re a solo player – which ESO embraces like no other MMO out there – giving you someone you can quest and adventure with when you’re not in full group.

Set 800 years before the events of Oblivion, the story of Blackwood leans heavily on the main antagonist from the previous game: Mehrunes Dagon. Tasked with discovering what is going on in the Leyawiin region, especially as rumblings surface that the Dark Brotherhood might be targeting councillors and leaders in the region, the main quest thus far has been enjoyable, if not a little predictable. I’m about halfway through the story, however, so expect full thoughts on the story, as well as side quests in our full review.

The region of Blackwood is interested, as we quickly go from the Ayleid ruins and Imperial strongholds that stick closer to the Topal Bay near Leyawiin proper, to the marshy lands of the Argonians, complete with Ziggurat-esque temples first really experienced in full in the previous DLC, Murkmire. The blending of Imperial and Argonian culture and architecture gives the Blackwood region a distinct look and feel: familiar yet foreign. ESO is at its best when it’s less high-fantasy and more interesting and unique, and I feel so far the region that ZeniMax Online Studios has built blends the best of both worlds.

Grasslands give way to marshy water ways, Ruins – from Imperial fortresses, Ayleid Wells, to even some Akaviri strongholds – remind you that while we’re almost a thousand years removed from Oblivion proper, this land and the cultures and people that inhabit it are even older.

The city of Gideon is the perfect example of this. A settlement built on top of ruins, yet is looking ruined itself – the Imperial walls crumbling while Ayleid ruins define walk ways, gardens and more. Marshy sections remind you that we’re in Blackwood itself, with Gideon feeling like a forgotten backwater Imperial outpost, even more forgotten thanks to the current war going on over the Ruby Throne. I was expecting to be awed by Leyawiin, the large set-piece town of the expansion, but I’m finding myself time and time again just setting my character in Gideon for the night, taking in the gardens near the Ayleid ruins. 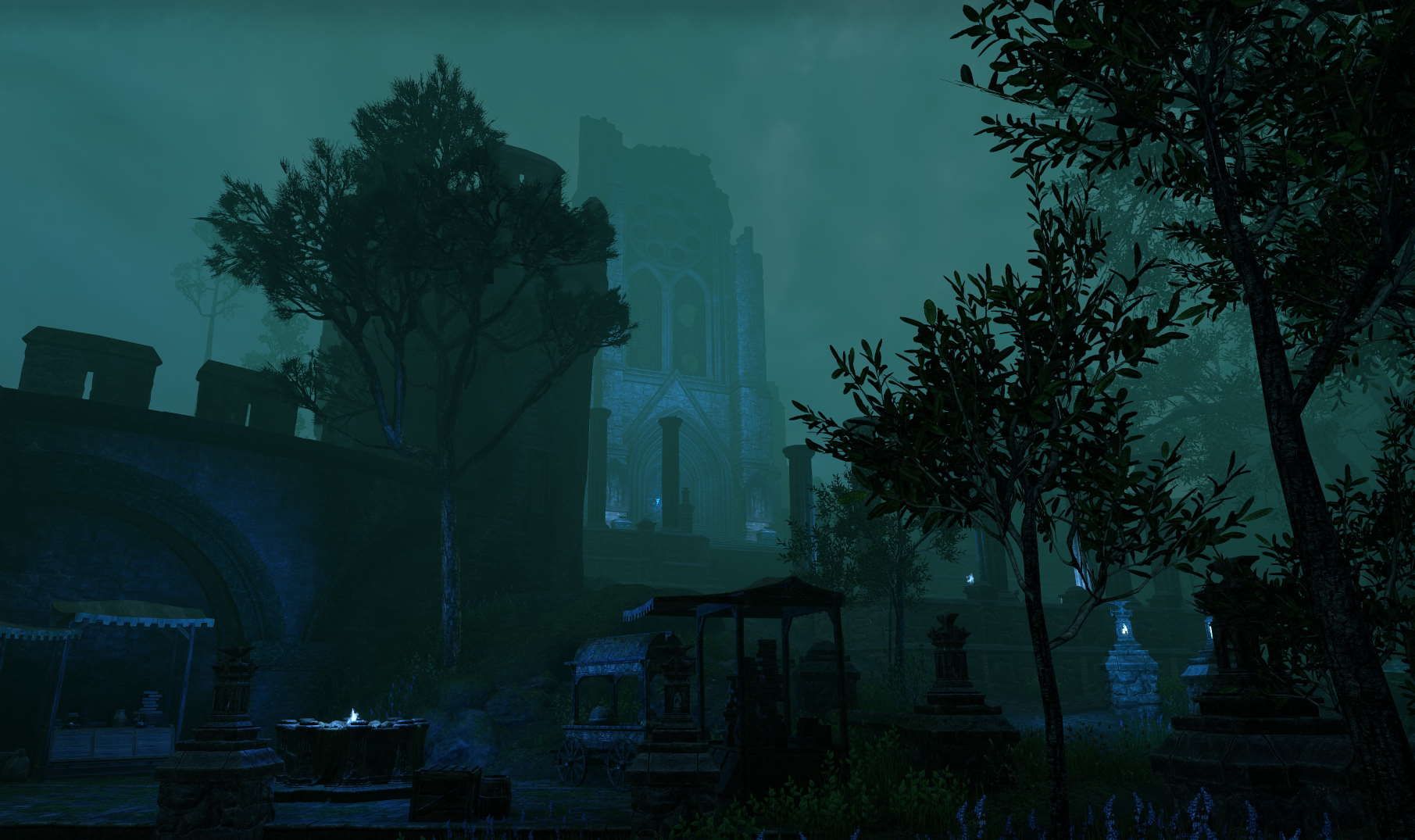 The large draw of this chapter, however, are the Companions. So far I’ve been questing mostly with Mirri, which seems to be the case with I would say 9 out of 10 players I encounter. I have unlocked Bastian as well and am eager to explore his personality, but so far Mirri has been leveled a bit with me so she’s just a tad bit more useful right now.

If you were going into this expecting a person replacement with the companion, I would stop you right there. While having the extra help to heal, deal some more damage or even tank something for you, it’s not going to replace just having a fully kitted adventurer at your side. Instead, Companions feel like a way to give you just the extra bit of help during a dungeon or instance that you might need should you choose to play solo, or even in a small group.

Also, if you thought you could 8-person a 4-person dungeon with everyone having a companion out, think again as well. During my playthrough, when in a group if there are any companions out and an open spot, it seems only enough companions stay to round out a four-person group. This way you get a balanced group without unbalancing it entirely.

Companions themselves use their own gear and get skill lines based on the weapons, armor and guilds you’re a part of as well. Being able to assign your companion to whatever playstyle you want is rather nice, as well as finding out the best ways to use their own intrinsic class (like Mirri being more of a Nightblade) to your advantage in a fight is key to getting the most out of your helper. Personally, I’ve got Mirri set up to heal, though I’m starting to think I might rather have another full DPS. Time will tell how I land, but thankfully like players themselves, you can swap between weapon and armor styles freely, building experience through use instead of being hard-locked into certain styles based on class.

I do wish there was more banter with your companion though, especially on quests. Doing the main story quest with your companion out, it would add to the flavor and atmosphere if your companion reacted to story elements and NPCs in a way that made it believable they were actually there with you. Instead they feel like a bystander along for the ride, making the same quips over and over again. It can get a little tiresome, and it breaks the immersion when your companion doesn’t react to some menacing monster or plot twist like you’d expect an NPC who is there with you to do.

I still have a lot to do before I’m finished with Blackwood, but so far it’s off to a great start, especially when you compare its launch with last year’s Greymoor. The team’s focus to ensure that the launch was stable is well placed, as in my adventures thus far I’ve not had the sweeping performance or connection issues that defined Greymoor last June. We’ll have our full review ready by next week, as we finish the story, complete the dungeons and sink more time into the companion system itself.