If the name Wurm Online sounds familiar, that isn’t surprising. The development of Wurm Online began in 2003, with its official PC release having been in 2012. Players may also recognize Wurm from the 2015 standalone version, Wurm Unlimited. Wurm Online is marketed as a sandbox MMO that provides players with ultimate freedom in whatever activity they choose. This is mostly accurate, since once the tutorial ends, the player is pretty much on their own. Has Wurm Online improved with the latest Steam release? This is our review for new players of Wurm Online on Steam.

As with almost any MMO and many games, the official Steam launch had issues that impacted performance during the first few days. Players had trouble with the Wurm Online client, continually disconnecting from the download server, and many were unable to log into the game for hours. Once they did get into the game lag on the Tutorial Island was horrible. Then, depending on what server you chose to after completing the tutorial, there was a constant lag with resources taking, sometimes, minutes to refresh/process. The development team did do a good job addressing the technical issues within the first few days. They brought new servers online, a tutorial server to handle the extra load from the new players, and a new PvE server for players who were experiencing lag on the existing one. The developers also created a portal in the starting town for those players wanting to transfer onto a less populated server, providing a better play experience. Along with the implementation of a few patches, the Wurm Online servers are now working with very few issues. I rarely run into much lag during any given play session. 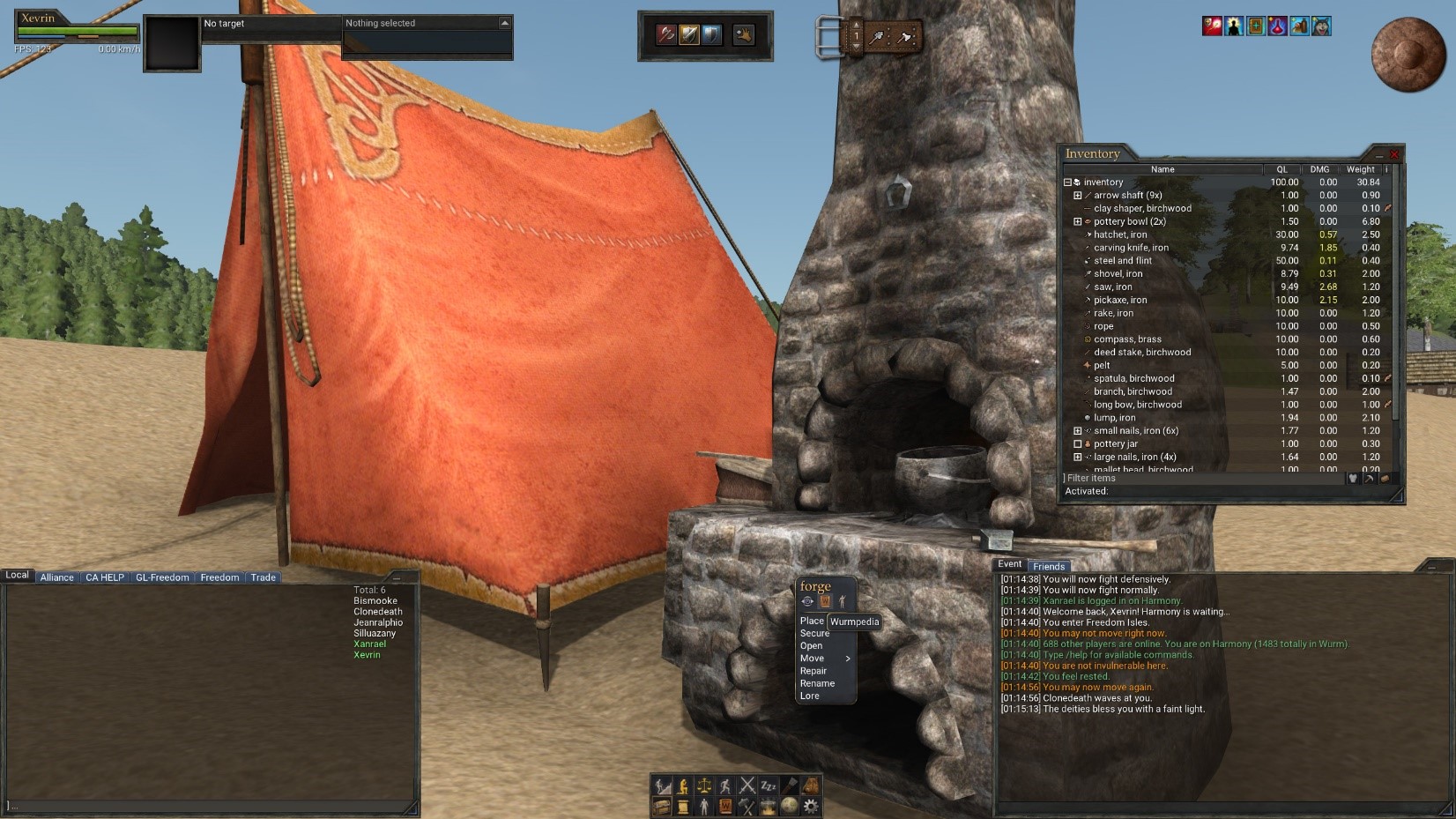 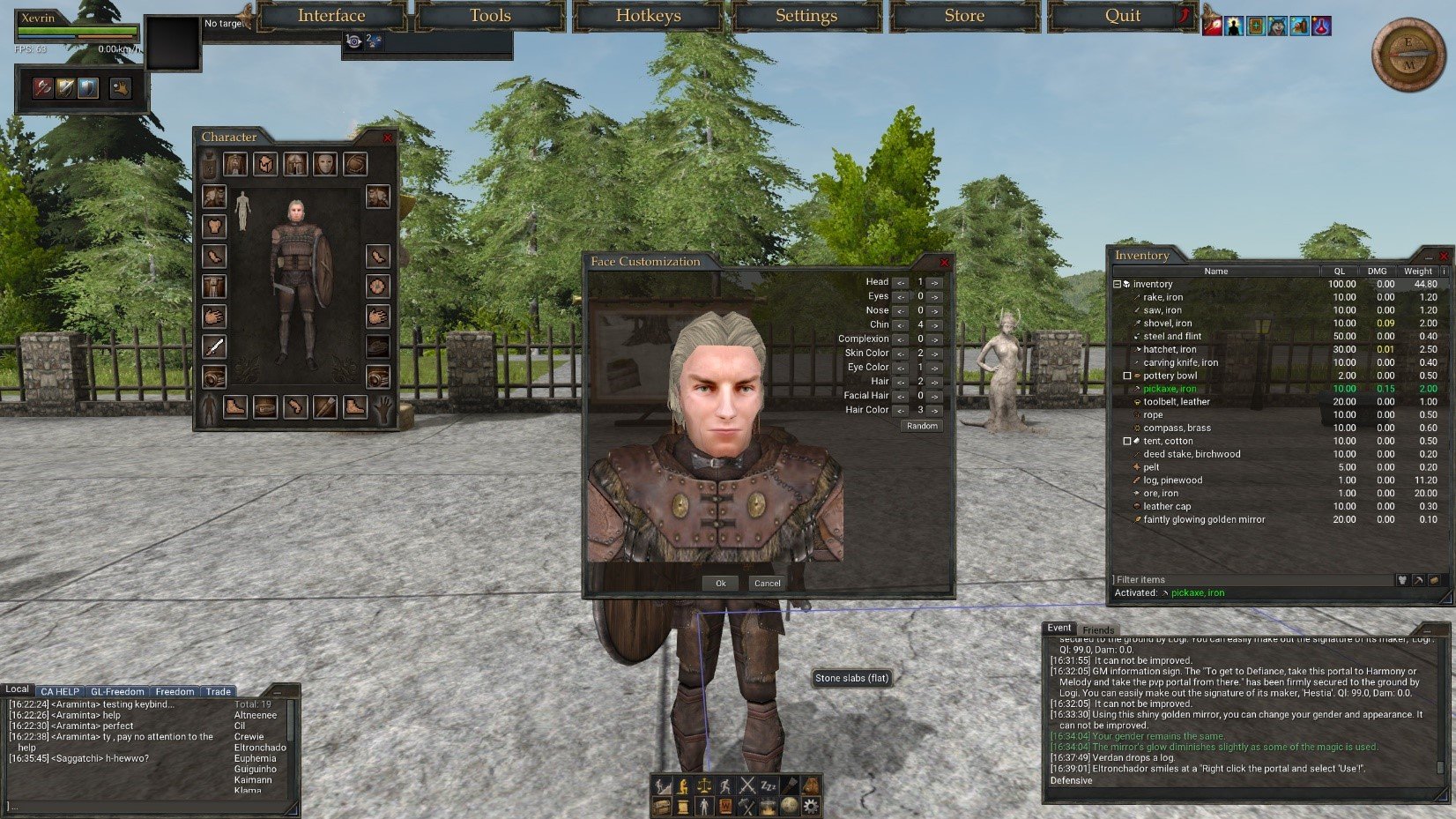 As a new player, my initial experience with the Wurm Online launcher sums up a majority of the problems and frustrations I encounter while playing the game. The first time I clicked on the “Play” button in the launcher, there was no indication, prompt, or message to put in a character name, the launcher just sat there. Once my wife told me that I needed to put in a character name, it made logical sense to me why the launcher was not working and seemed a rather obvious thing to do after the fact, but there was no queue/guidance for the player whatsoever. I mistakenly assumed that I would only create a character name after the game launched for the first time. Thankfully the developers have been responsive to issues like this and have patched in improvements/fixes quickly (there is now a text note below the character name field so that players are not left wondering or having to go searching on the forums).

Unfortunately, this lack of guidance exists throughout the game. Welcome to Wurm Online, where you will want to immediately bookmark the Wurmpedia and strengthen your Google-fu, otherwise, almost everything you do will be trial and error. Wurmpedia is so essential to playing this game that when you right-click on most in-game items, there is a link that will open its Wurmpedia entry. By the way, if you want to change your character's gender and/or appearance, make sure you click on the “faintly glowing mirror” in your inventory after you log in for the first time. It's a one-shot item that will let you pick your gender and choose from some limited character appearance options. 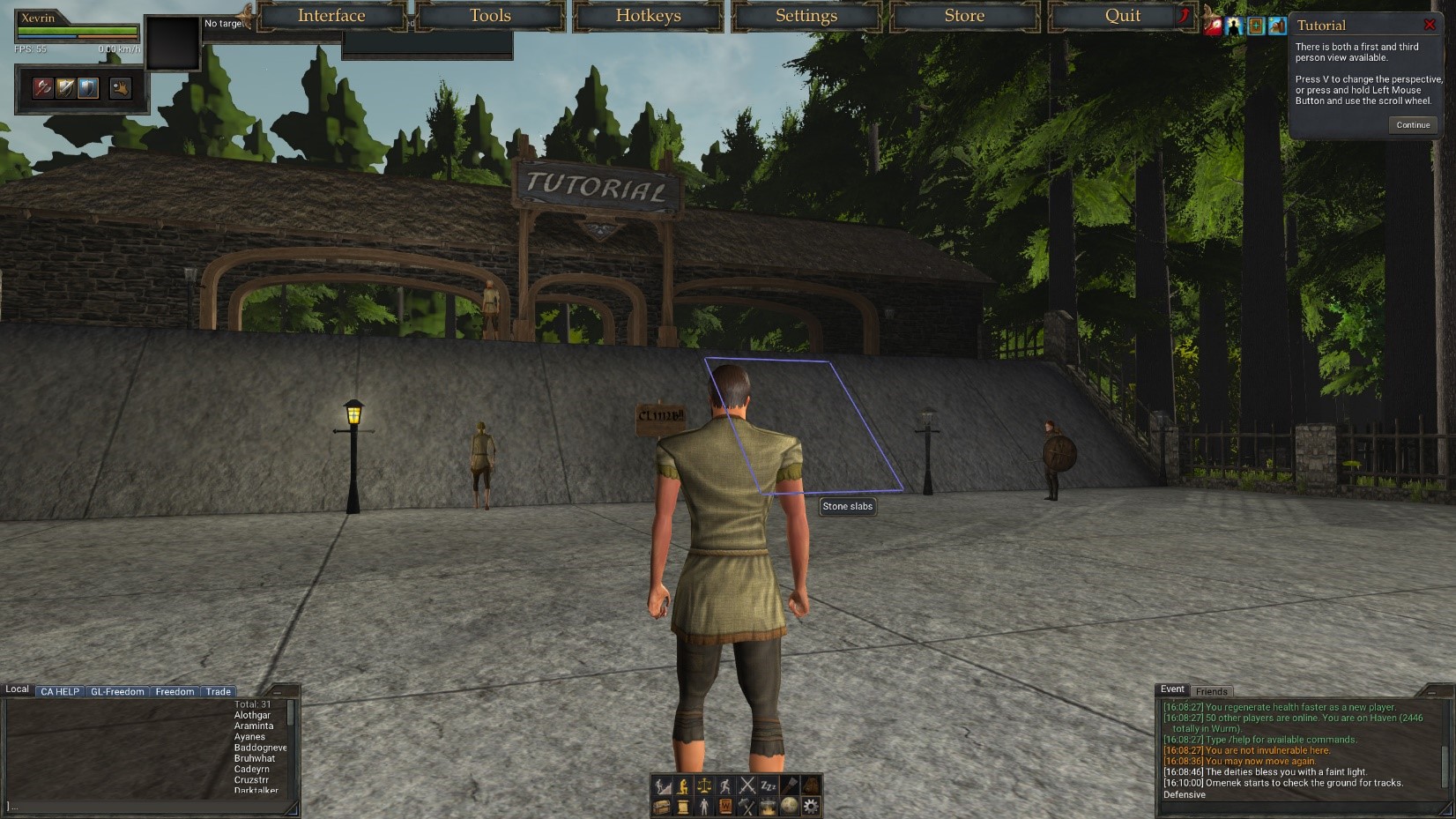 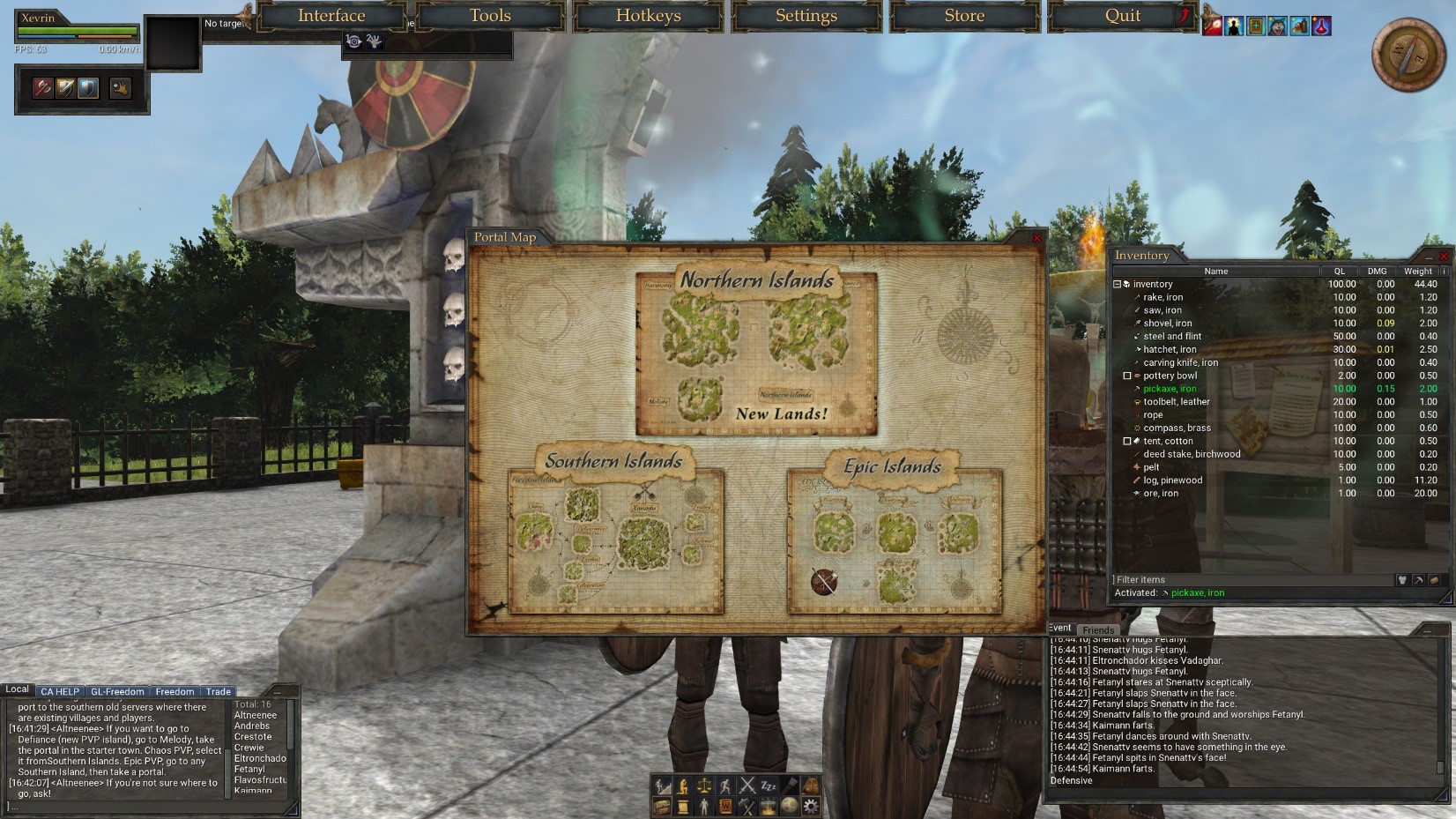 The new player tutorial experience is straight forward and short, so long as you are willing to read the in-game signs along with the UI messages, there should be little issues with completing it. It will teach you the basic skills needed to play, including how to dig, flatten/level, climb, use/activate equipment, and combat. The tutorial is very short, once its completed there is a portal that allows the player to choose a PvE, PvP, or Epic island (server). After which, as a new player, you have access to the journal that can help guide you on what further to do during your first hours or you can completely ignore it and pick a direction to explore. 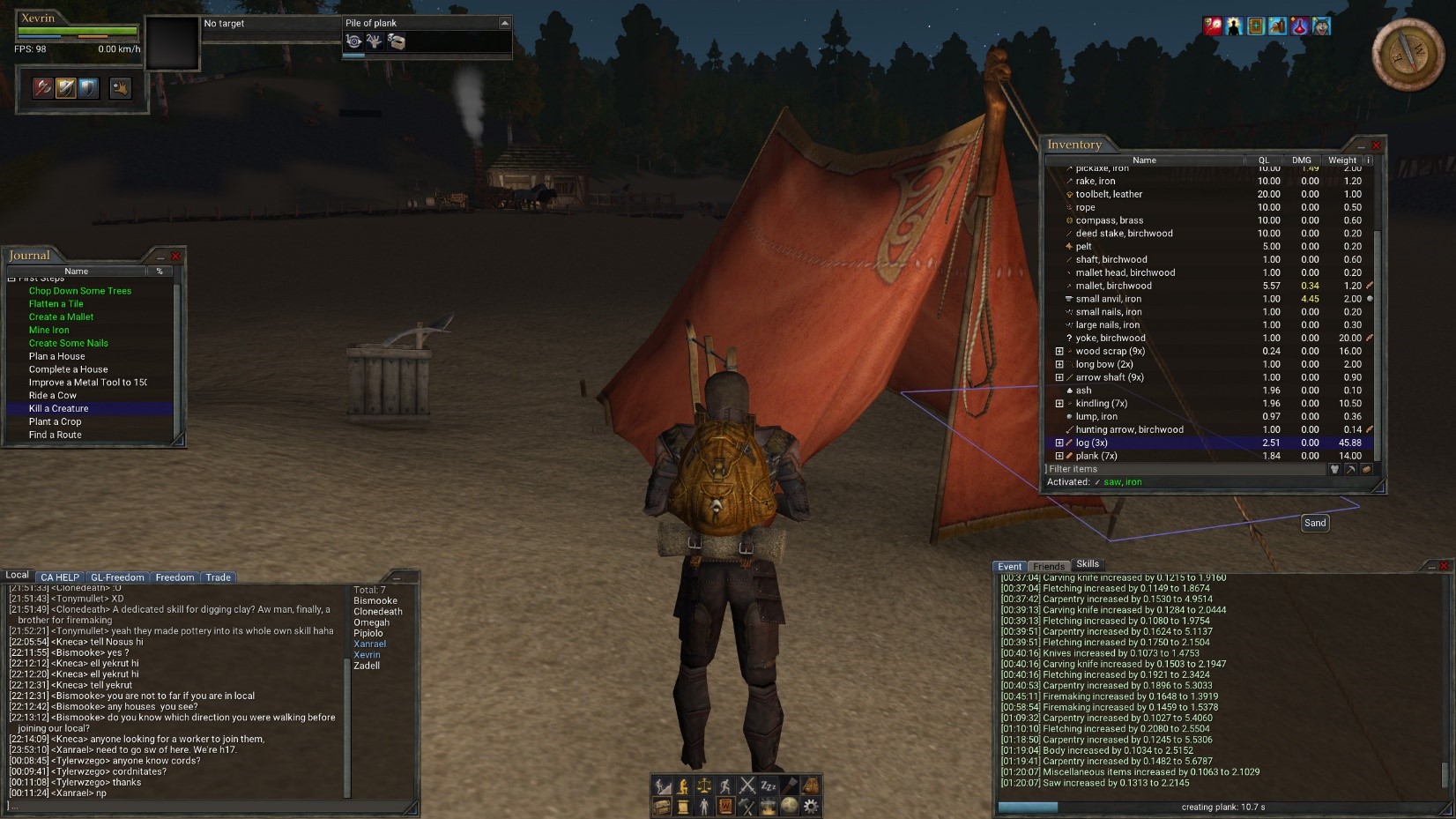 Your first few hours will most likely include wandering around until you find a spot to put up your tent and start leveling up skills, expect to die at least a few times. The in-game systems are where Wurm Online shines, the skill system is complex and provides you with the tools to modify/build the world in almost any way you could want. Fancy building a shack up in a mountain? Check. Want to work toward building a castle where you design the floorplan and then have all your friends come live with you? Check. Want to build and run a kingdom? You go for it. The only thing is, you have to train your skills up by repeatedly by building and gathering everything - so that the skills related to the goals you want to achieve level up, and it takes a lot of time. You will be digging a lot of ditches, making roads, and plodding your way along encumbered by the resources you have gathered until you can make your first storage bin, cart, and/or ride a cow. Even building your first cart is a multistep task of creating all the components and putting them together (once you have high enough skills to do so). At its core, Wurm Online is a kingdom builder. 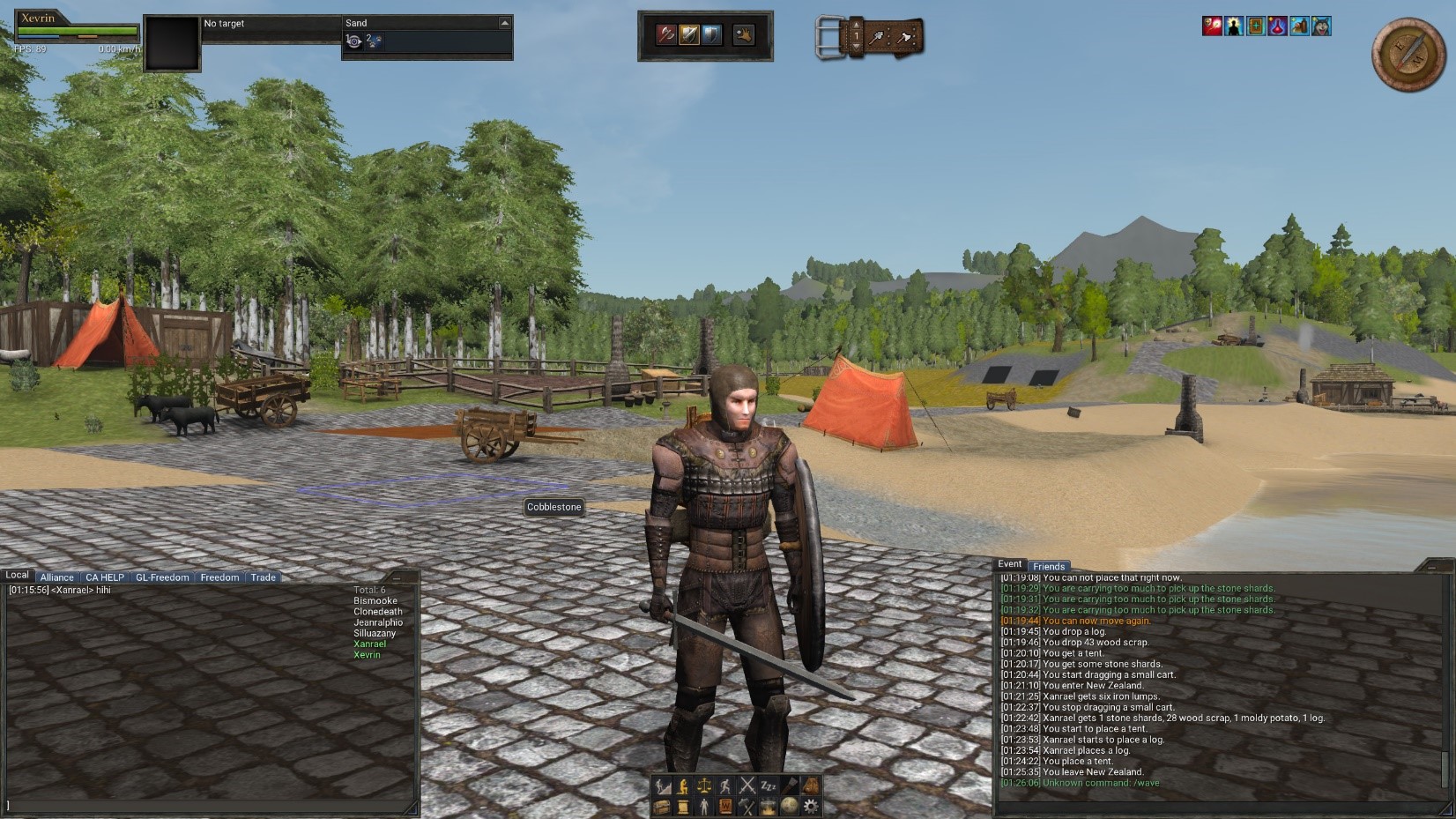 So as a player, what is it you can do in Wurm Online at endgame? Short answer, anything you want. You have the freedom to create a kingdom, go it on your own and explore the world, monster hunting, PvP, Epic server scenarios, or run a smithy. I, for example, am tempted to become an alchemist and build myself a tower. Players need to make their fun by setting goals, then once accomplished, set a few more, rinse and repeat. I have only been playing since the release on Steam and in our area, I can already see the start of small villages that show the promise of growing into something greater. I expect that over time multiple smaller communities will grow organically, combining into a larger one, and so on.

Keep in mind that Wurm Online does have many shortcomings, the game is showing its age, even with the UI update and improvements to the look/feel of the game. Graphics are lacking (you can tell this game was developed over a decade ago) they aren’t horrible but don’t expect anything special. The music and sound effects are decent enough, they just don’t always match up with what you are doing, and most of the time I found myself just turning off the sound while I watched Netflix in the background. Combat is a horrible experience, but it does the job, more or less, functioning as another form of gathering. In most cases, combat for new players boils down to the following: you activate attack and wait to win; wait to die horribly; or run away.

It is hard to beat the price if you are looking to try out Wurm Online, it is free up to skill level 20, but keep in mind with a free account you will only be able to ride cows, you can’t build a settlement, and if you stop playing your account data will be deleted after 3 months. If you find yourself enjoying the game at all, I highly recommend getting at least one month of premium subscription. It will not only give you several benefits while active but more importantly, your account data will never be deleted for being idle. You can also purchase silver, Wurm Online's currency, through Steam. While there are ways to earn the currency through in-game activities it is rare unless you make goods and trade with other players.

Wurm Online is a game for players looking for a completely open sandbox experience. It has a complex classless skill system with over 100 skills. Building up your character will take hours upon hours and while many of the tasks I have mentioned previously may sound tedious, you are rewarded regularly through skill progression and by having crafted every part of your equipment/community. As a player, you are helping to create the game world and to many, that can be very appealing. The dated graphics and combat system drag it down though.

If you are looking for quests, fast-paced combat, or a traditional storyline then this is not a game for you. Since Wurm Online is free to play up to the skill cap of 20, I highly recommend at least giving it a try, it is a different experience compared to other MMOs and one worth having. If you do end up enjoying the game then grab a subscription for one month. At least that way you will never lose the progress made on the digging skill to level out the ground for your future mansion or the body control skill so that you can eventually ride a Unicorn.