Crystal Dynamics finally released the long awaited, and modestly anticipated character, Hawkeye, in Marvel’s Avengers last week. The update, which included a new Operation titled Future Imperfect, an homage to The Incredible Hulk comic arc with the same name, was meant to bring some changes and much-needed content to the game. Hawkeye has flash and sizzle, but the update puts Crystal Dynamics in a precarious situation. One that even a roadmap can’t cure.

If you need to be brought up to speed on where we are in the Marvel’s Avengers story, I’ll provide a high-level overview, without going into too much detail due to spoilers. Essentially, AIM is aware of a world-ending threat, and in Taking AIM, the last Operation that introduced Kate Bishop, players were tasked with saving Clint Barton, a.k.a. Hawkeye, from AIM’s clutches, and preventing time-bending tachyon rifts from essentially ending the world. Now, with Future Imperfect, more of the story gets divulged, and the team will take a jaunt into the Future, face new enemies, and meet Maestro – an evil and calculating personality that now embodies the Hulk. There’s more to the story, mainly relating to the Kree, but without giving away the farm, you’re all caught up. 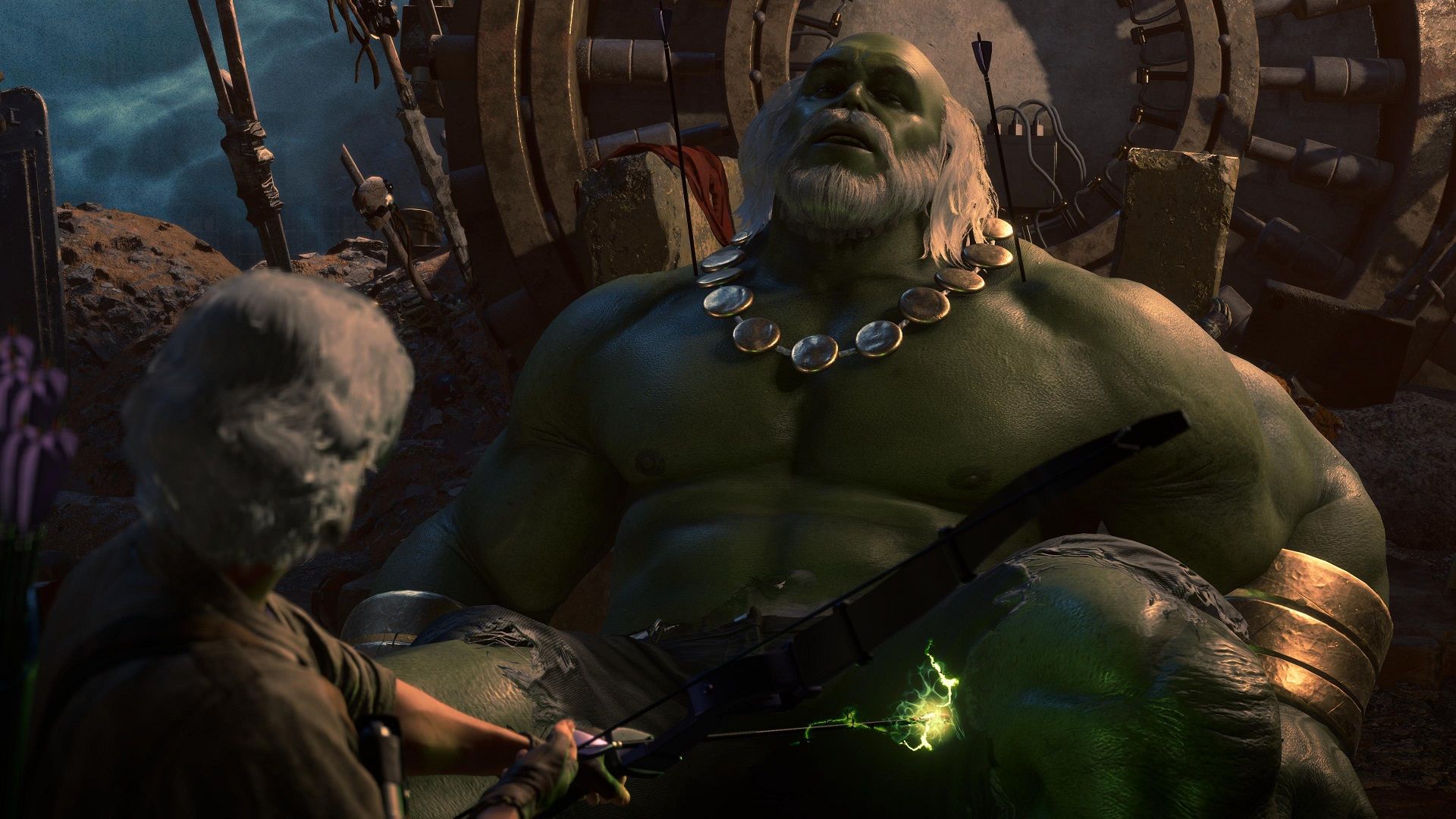 With Future Imperfect, Marvel’s Avengers shows, once again, that Crystal Dynamics excels at an engaging narrative. It’s the primary reason that the game was reviewed so positively upon launch, despite enormous missteps in multiplayer, endgame, and general bugs. Hawkeye may not be an exciting Avenger on par with yet-to-be included characters like Dr. Strange or even Ant-Man, but narratively, the Future Imperfect storyline and the inclusion of Old Man Hawkeye manages to keep comic fans invested. Hawkeye and Kate express a lot of emotion throughout the course of the Operation, which is well acted, and an experience that will take you about two hours of play time if you indulge in every cutscene.

Hawkeye as a playable character, however, feels less cohesive than Kate. Functionally, he has some great Ronin-inspired swordplay, and the mix of ranged combos and perfectly-timed marksman shots feel true to the character, but momentary pauses and movement hiccups detract from a fluid experience. It also hurts Hawkeye that his versatility confuses the character more than helps him. Hawkeye is somewhat more versatile than Kate, in that his arrows, combos and intrinsic abilities all have very distinct use cases, like his homing arrows that are mostly useless on nearby enemies and are rarely worth the long combo string required to get them to work. 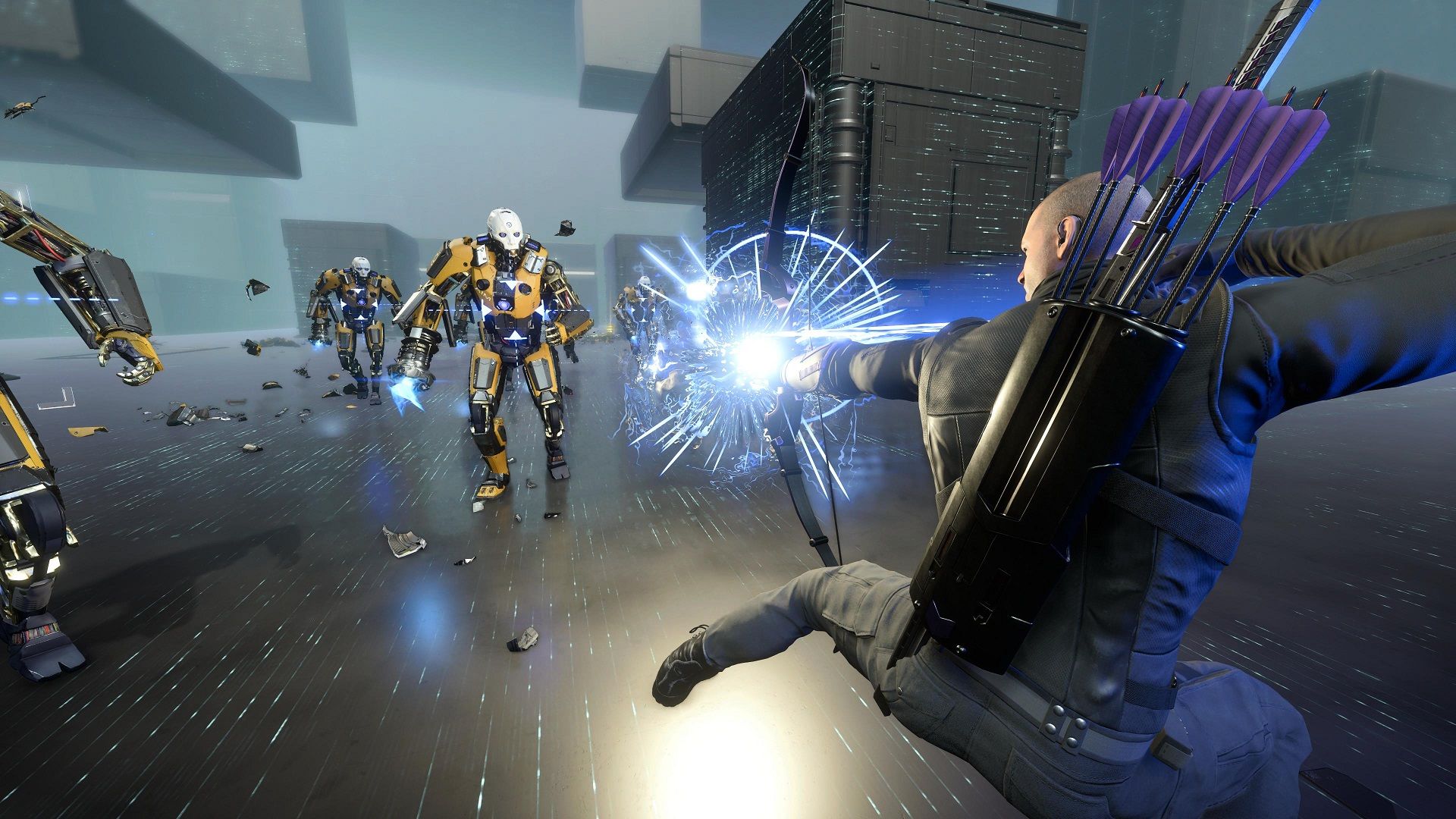 This gets compounded by another problem with Hawkeye, his ranged attacks! Firing Razor arrows, require that you babysit them far too long to be effective – especially in comparison to Kate, Black Widow, Iron Man, or Captain America, all of which are characters that provide a more cohesive ranged experience. Drawing back your bow with Razor Arrows on Hawkeye grants you a short window to proc his Marksman buff - a powerful and difficult to master stackable damage boon. Drawing back your bow for Pulse Arrows already takes a decent amount of time if you hope to pin an enemy to a wall, but then, for the best damage, you have to wait until the pulse arrow turns red to maximize the explosion. Playing fast and loose with Hawkeye as a ranged character is far less exciting than taking the fight into melee range with his sword, and that is a major missed opportunity – especially after the diamond in the rough, Kate Bishop, surpassed my expectations.

The other added features, like the customizable Harm room, the new enemy types, and Maestro, are all modest improvements that mostly just make use of the existing enemy and terrain assets we’ve become very accustomed to over the past 6 months. Even the next-gen system upgrades are welcome, but won’t have any real lasting appeal. Sure, my PS5 can cut down my load times substantially, but the shorter load times probably only mitigated the additional time they added when they increased the amount of XP it takes to level. Elevator rides in Mega Hive might take less time, but that really just reminds players that they're stuck doing the Mega Hive, which is a masochistic, repetitive, weekly routine that is essentially the best Marvel's Avengers can offer for endgame right now. 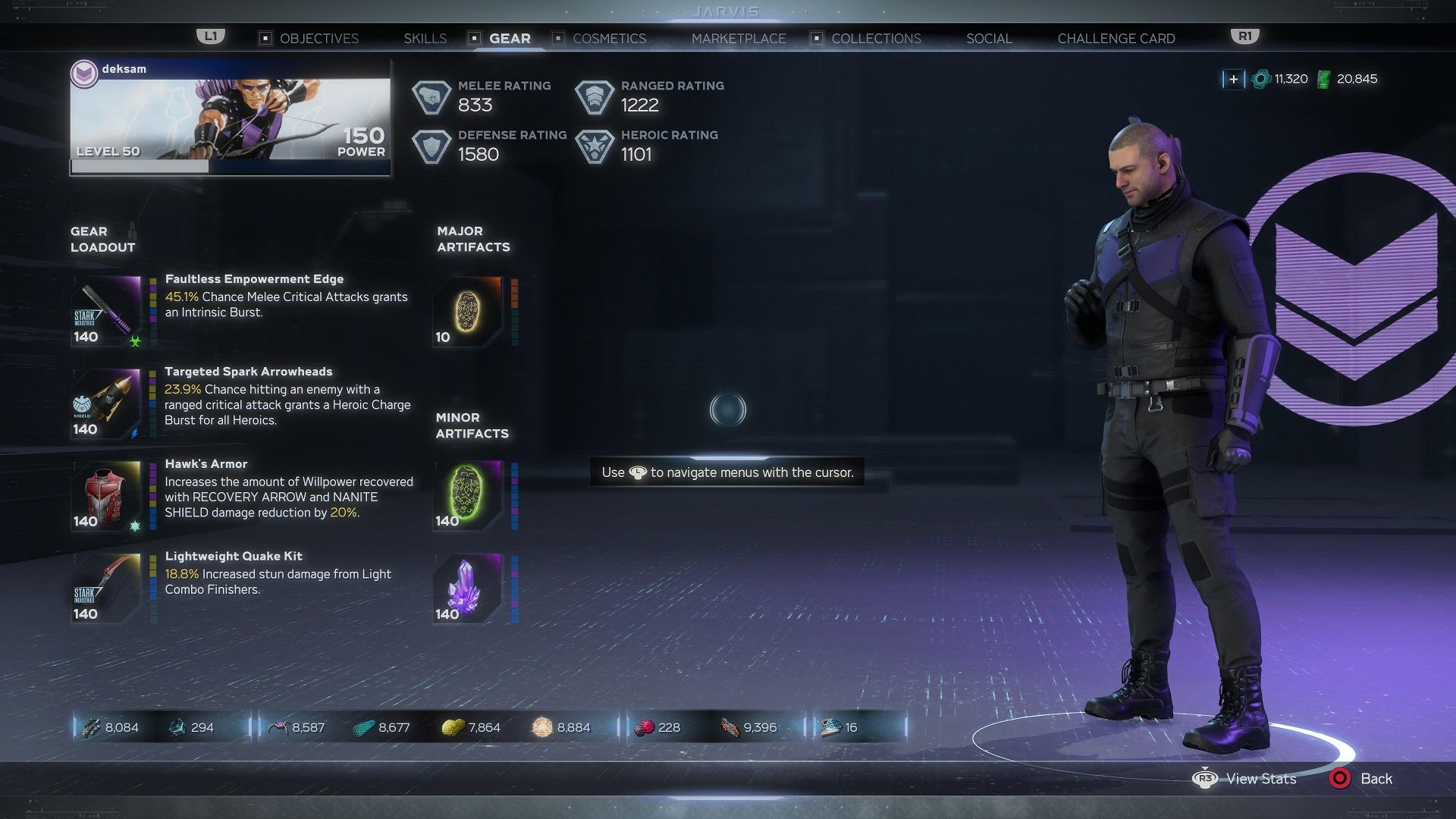 Therein lies the problem. Crystal Dynamics, at this juncture, is damned no matter what they do. The simple facts are, Marvel’s Avengers needs content. Perhaps their greatest mistake was making the game a live service title in the first place. Now, it needs a complete rework to gear, and an endgame that feels fun and rewarding. Future Imperfect is a great step, but it’s too small of a step. I spent about 8 hours of time completing the story, leveling Hawkeye to 150, and playing with the “new” content, and I’m back to where I started the day before the update.

Yet, had Crystal Dynamics waited another two months before they were able to put out something more substantial, they probably would have been accused of going the way of Anthem, which would have resulted in a further loss of players. Crystal Dynamics needs to convince their community that the team understands what it needs to do, not just that they are doing something - but how they intend for these changes to be implemented. Communication is a bust, and it feels almost like their War Zone Director has gone rogue so that he can defend and play damage control to a project that he’s worked on and believes in. 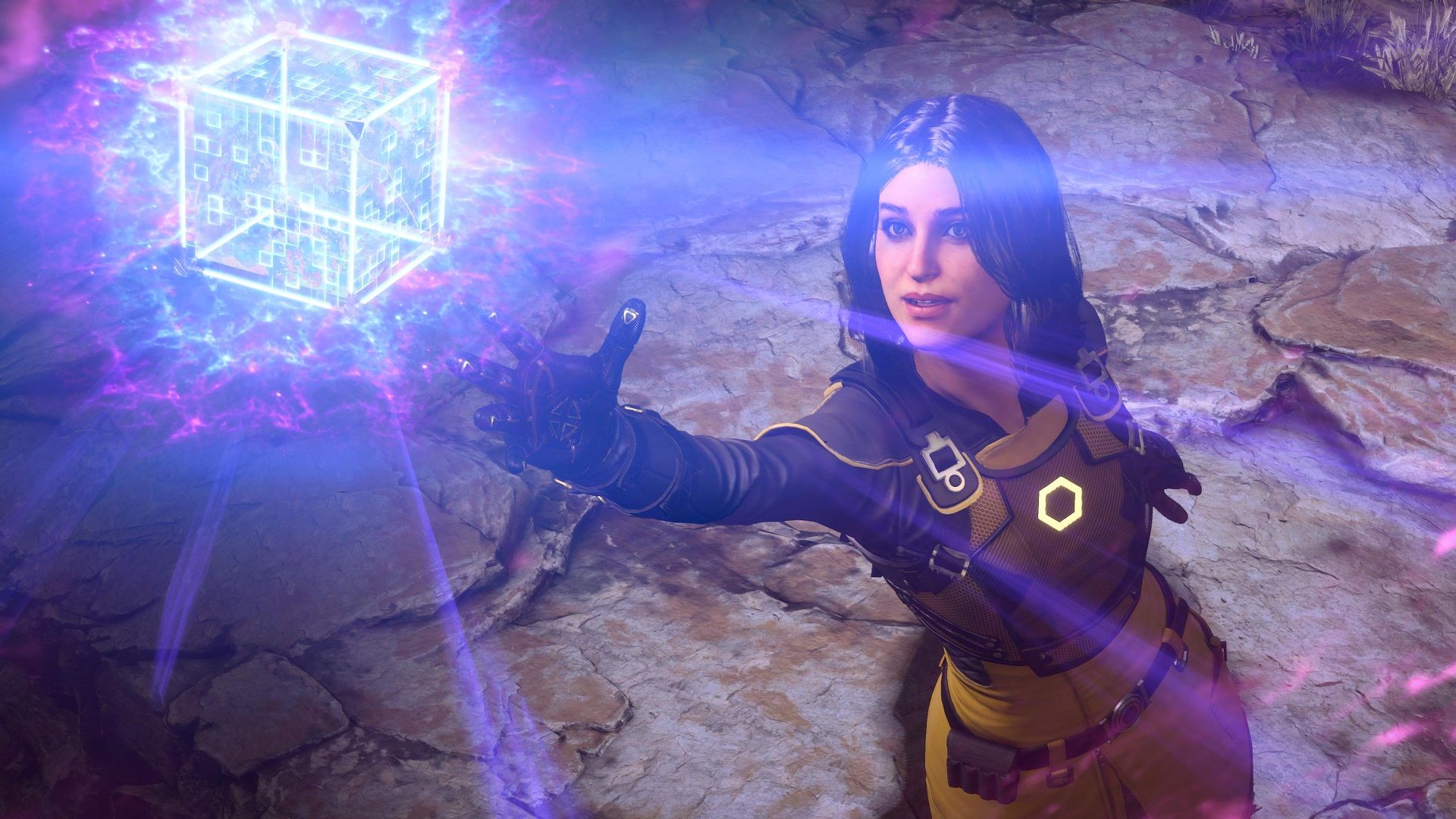 These changes can’t happen overnight. The communication surely could, but Crystal Dynamics hasn’t exactly charmed the community with their announcements as of late. After the massive Spider-Man PlayStation exclusive debacle that ostracized a good portion of players from other systems, and the XP rework, that left the community and games’ media perplexed, maybe they feel going silent isn’t the worst thing.

Should I even broach the subject of the PlayStation 4 to PlayStation 5 save-game miscommunication when Future Imperfect went live? The convoluted transfer process, sparked by the poor decision for local save-games, left a lot of players worried that they lost everything, and the official Twitter account for Marvel’s Avengers provided incorrect instructions for several hours. 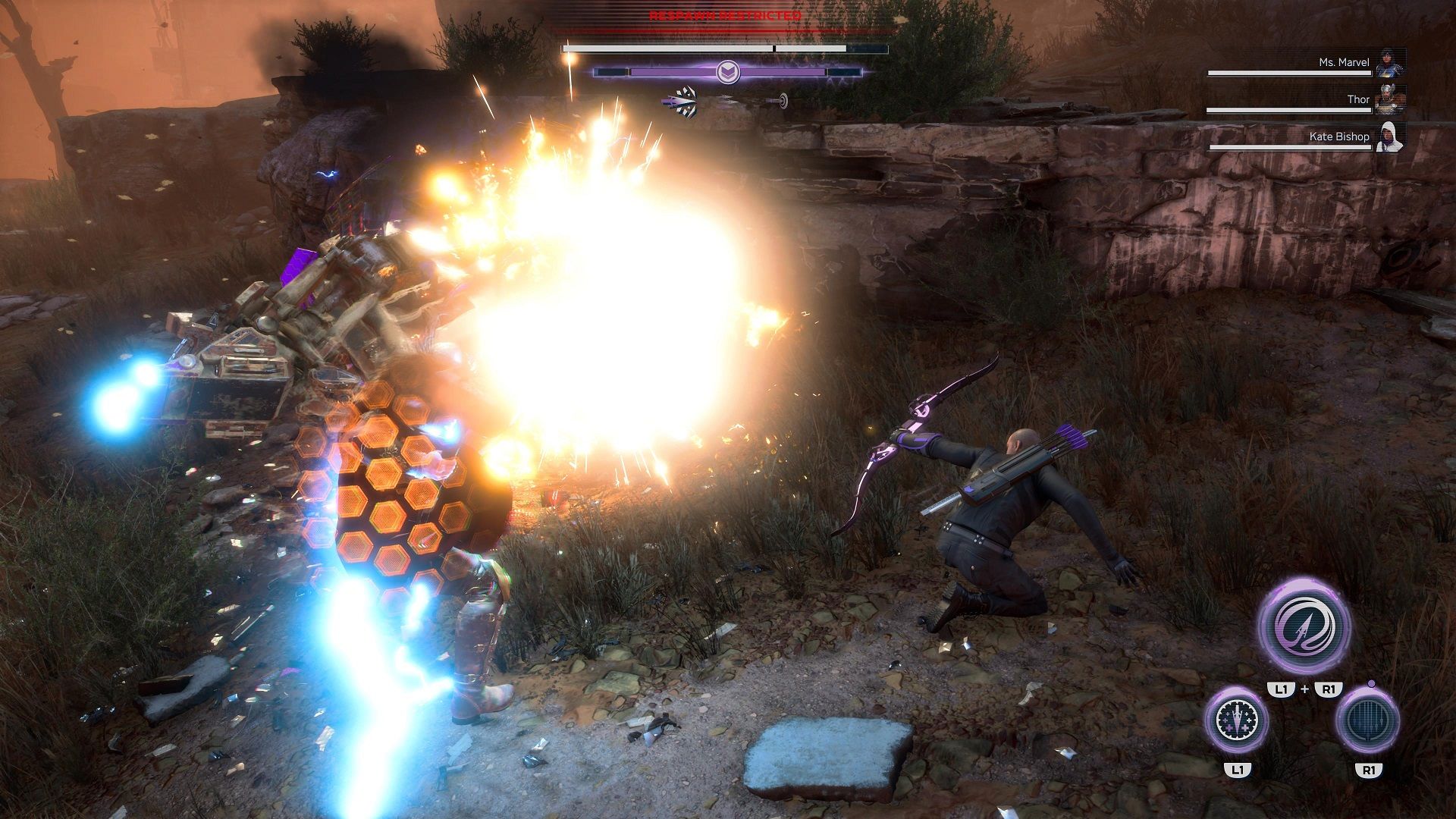 I’m not going to diminish any studios’ hardships, even with the pandemic as an easy (and generally understandable) scapegoat to the missed update targets, and inconvenient ongoing bugs and snafus over the past 6 months. I will say that the latest roadmap that depicts changes, content, and a new expansion, Black Panther: War for Wakanda, won’t be enough to bring back the tens of thousands of players that have been Thanos Snapped away since the game launched.

In actuality though, whether this game increases in popularity, or continues to falter either several months more, or indefinitely, it may be inconsequential to Square Enix. The publisher isn’t tasked with keeping Marvel’s Avengers alive. They’ve been tasked with a “multi-year, multi-game” partnership with Marvel, and there is a high possibility that any failure from one of these projects, could put the additional projects at risk of losing their Marvel Licenses. That does point to a good probability that Marvel’s Avengers probably isn’t going anywhere anytime soon. The game does have a future, but based on where it is now, and where it needs to be to keep players happy, it’s a Future Imperfect.