Even the slightest dip in player counts can send alarm bells ringing in the heads of some players of MMORPGs. YouTubers are quick to view Steamcharts and Steam.db data and talk about how their favorite game is dying. It is a trend that has existed for years and it does not seem to be going away. While some player count drops are caused by poor handling of a game, it is not always the case.

Why We Need to Stop Calling Every Game “Dead”

The trend of calling games “dead” is not limited to the MMORPG genre. Players have claimed Fortnite is dying for years, yet it is one of the most popular games. There are videos claiming “Apex Legends is dying”. At the same time, Apex continues to break its peak concurrent player count over and over again while also seeing an increase in average players per month.

But there are genuine cases of player bases seeing massive dips, raising concerns. New World, a game that peaked at 913,000+ players is now sitting at under 20,000 players at the time of writing. It is normal for the novelty of games to wear off and the player base to take a massive plunge a few months after launch.

Sometimes, there is a dip in the player base because of a lack of content. Most games go through content droughts whether intentional or not. Even if developers do design content that should be played for several weeks or months, we gamers always find a way to optimize our playtime and find the quickest ways to clear content. Players simply burn through all of the content there is and wait for the next update. There is absolutely nothing wrong with doing that either and you as a player should decide how to best invest your time.

If we look at any game out there, the major patch releases, expansion releases, and launch windows typically have the highest player count. And it is completely normal for the numbers to take a hit as a game ages or there are “content droughts.” Just because the player numbers look worse because of completely natural reasons, does not mean that you should call the game dead and possibly scare new players from joining the game.

There are cases of games genuinely dying because of a lack of vision from the devs. content updates getting delayed, or other reasons. But not every game sees a drop due to the same reasons and it is important to look beyond the simple numbers on Steam charts.

While I agree that a solid player count does mean that a game is healthy, comparing the player counts between two games can rarely lead to any meaningful conclusions. Take the entire Final Fantasy XIV versus World of Warcraft debate for example. FFXIV is often considered one of the biggest contenders to World of Warcraft but it comes nowhere close to matching Blizzard’s MMO. Final Fantasy 14 director Naoki Yoshida said in an official livestream in July 2021 that is impossible for Square Enix to compete with WoW’s peak of 12 million subscriptions. He said, "The hard work we've been putting into Final Fantasy 14 did pay off. But this whole conversation about surpassing WoW is the wrong conversation to have and it's honestly irritating." 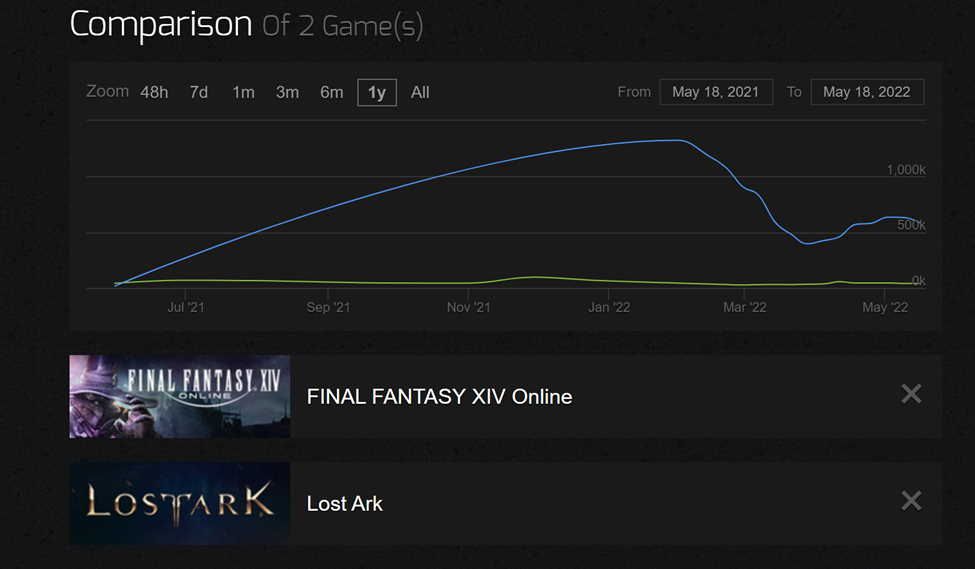 Final Fantasy XIV averages around 28,000 players currently and its all-time peak on Steam is around 95,000 players. While the number may pale in comparison to something like Lost Ark, it does not mean that the game is dead. In fact, it is one of the most-loved MMORPGs out there. And the same can be said for countless other titles that do not make it on the list of the most played games on Steam or other platforms. It should also be noted that a lot of games like Final Fantasy XIV and Runescape are available outside Steam, which means players do not always get the full picture when comparing player counts.

It is completely natural to want to get into MMORPGs that have a healthy player base. With some MMORPGs featuring dozens of servers, a smaller player count means that you may not find enough players for activities on your preferred server. It is important to have enough players to play with. More players mean you have more guilds to choose from and you can also expect fair PVP matchmaking.

Fun Should Decide Where You Spend Your Time, Not Numbers

While you need a sizeable player base to enjoy an MMO, the fun factor should be what drives you to try out games. You should play games that genuinely appeal to you and look fun. Even if it has a “measly” 5,000 concurrent players, it does not mean that you will not be able to enjoy a game. On Steam, Runescape has over 3,000 active concurrent players while Old School Runescape has under 1,000 players. Does that mean that you should not play Runescape in 2022? Absolutely not. If it’s a game that appeals to you and you think you will enjoy it, no one should stop you from giving it a shot. 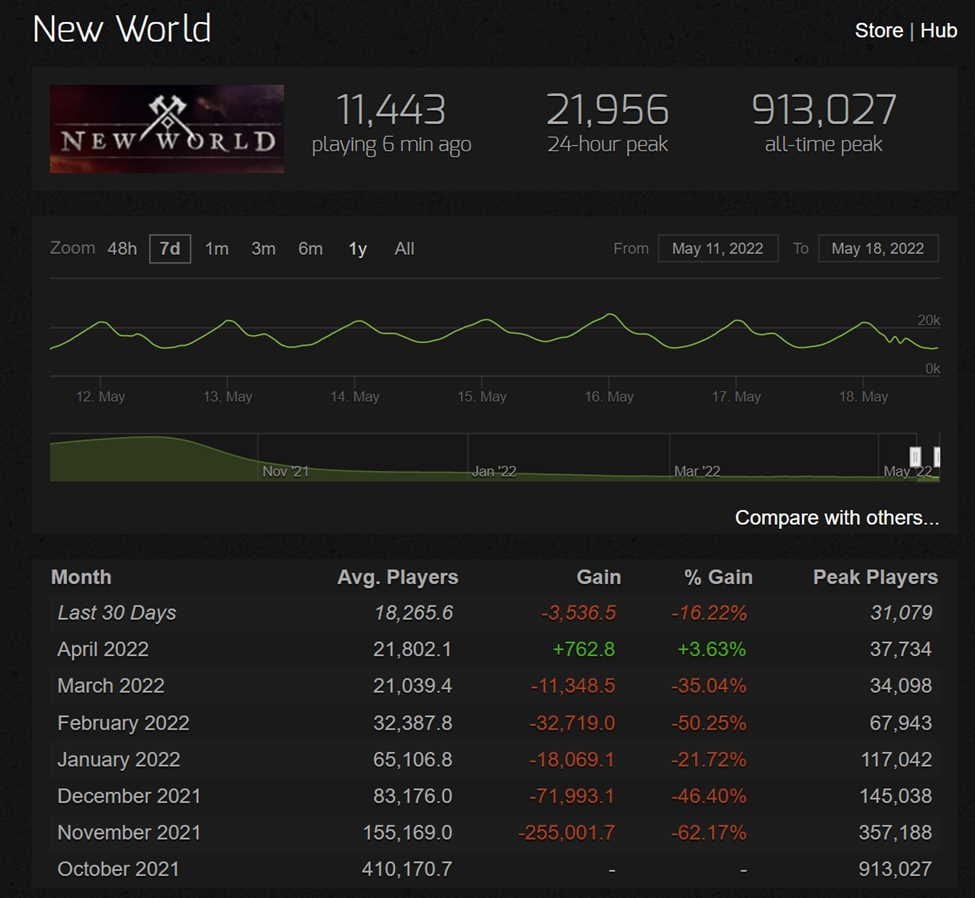 While the core gameplay is fun and it does have some interesting mechanics, Amazon Games has been unable to keep the game’s economy in check.  Amazon Games had to put a halt to the game’s economy on multiple occasions in an attempt to keep things in check. You need to look at each game through the lens of its dedicated player base and see if you should invest your time into it. Both New World and Final Fantasy XIV share similar player counts these days but you will find drastically different opinions within each community.

Find games that you think respect your time and offer you a genuinely rewarding experience. A number on Steamcharts should not dictate whether or not you should play a game. There are plenty of MMORPGs out there that you can enjoy even though their player counts might not be as impressive as you’d want them to be.