I’ve never played a Diablo game before this past weekend. I know, I’m ashamed of my PC credentials too. When my friends were playing Diablo in high school I was playing Battle for Middle-earth, Medieval: Total War and games like Starsiege: TRIBES. Diablo was on my radar, but it was never a game I had any real particular interest in growing up.

However, it was always this game my friends would speak of fondly, would swap stories of traveling around Sanctuary and discussing class builds and gear they would find with excited voices. I was always feeling a bit of FOMO for not being able to participate in those discussions, but the graphics at that point had put me off going back and trying it out later on.

I’ve played other ARPGs and discovered a particular love for the genre. Games like Torchlight and Path of Exile really are the only looter-based games I can play with any frequency (I’m not a fan of looter shooters, but give me an isometric sprite running around a map and I’ll be there). Magic: Legends recently scratched the itch briefly, with its deck building-based skills adding a cool twist to the genre, but when I got the chance to finally play Diablo II, I jumped at it this past weekend. What I encountered was a mix of emotions, both enjoying what I played yet I couldn’t come away without thinking it felt archaic and dated in spots.

As I’ve never played a Diablo game before, dropping into Diablo II Resurrected provided an interesting starting point. The beginning cutscene was lost on me as I didn’t have the requisite context to make much sense of it, though I was still intrigued to figure out what was going on. Being dropped into the Rogue Encampment without really much of anything but a basic weapon and the clothes on my back, I started to explore the world around me.

The colorful sprites are replaced by a 3D rendering of the Diablo II world, clearly lovingly recreated in high detail to give the ARPG a fresh coat of paint for 2021. You can easily switch to the Legacy mode, showing Diablo II as it did in all its original glory, however I couldn’t get into it then, I still can’t now. The remade graphics are definitely intended for people like me: who need that fresh coat to keep them grounded in the world. 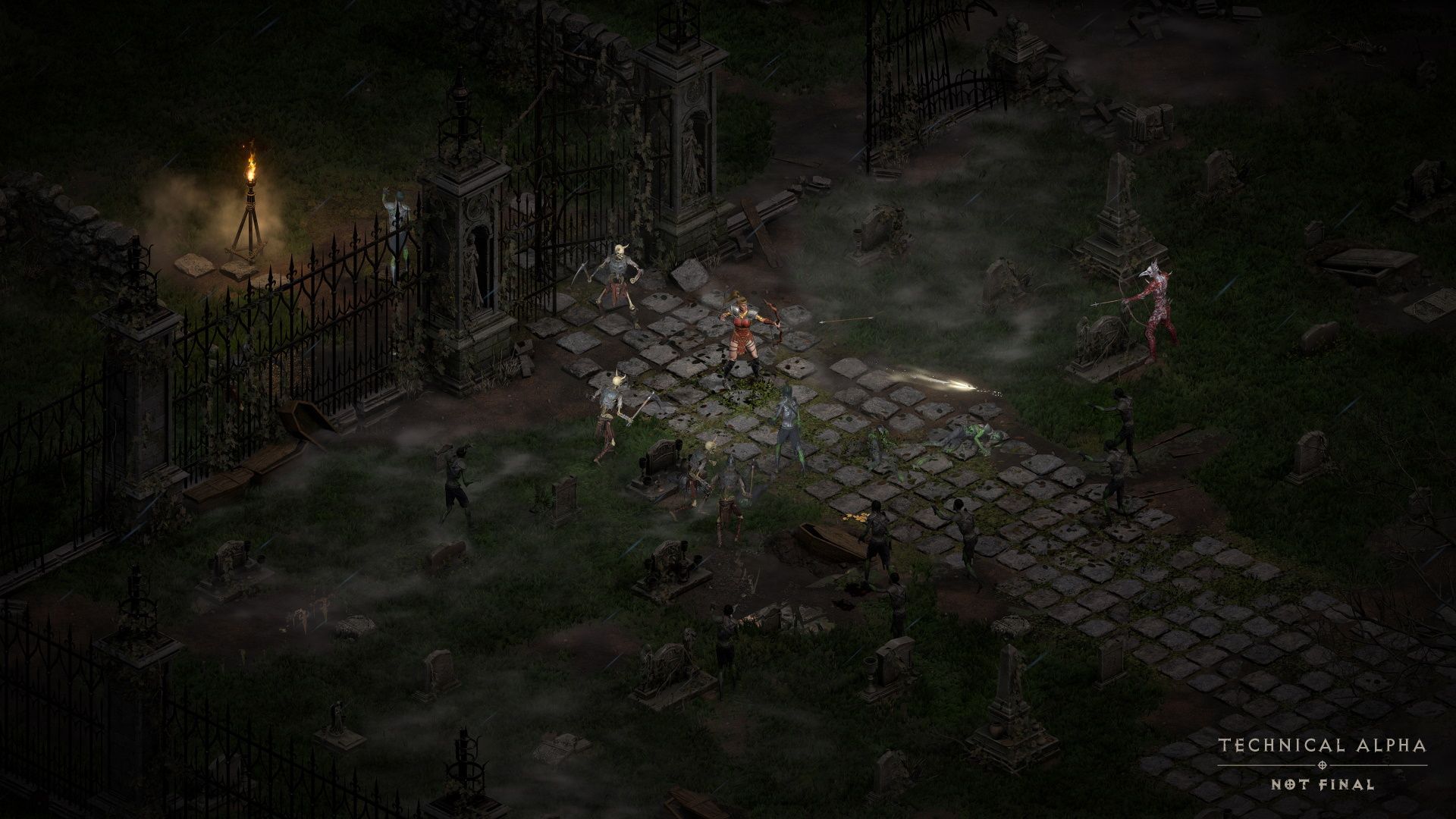 The dark setting of Diablo II Resurrected looked fantastic, by the way. The character animations particularly stood out as well. Playing an Amazon, the attack animations were crisp and felt like they had impact, but it was running that really showcased the quality work. Changing direction saw my Amazon character stop and spin on a dime like an NFL running back, the momentum of the move carrying them forward. It was incredibly realistic and so well done I found myself sitting there for a few moments when in the Underground Passage of Act I just running back and forth to see the animation over and over again.

Attacking waves of enemies was also intuitive – just click on them. Learning how to approach gaggles of Fallen enemies was interesting at first as I didn’t realize the Shaman in the back would resurrect their fallen brethren. So I would hone in on those first before taking out the smaller swarms of enemies. Using the Javelin in the first few quests before buying a better Spear later on was cool as I was able to mix range and melee in before I even got my first bow. Weapon swapping was also rather intuitive, letting me mix and match my combat on the fly.

The impression wasn’t all that good, though. Movement felt slow until I figured out you could run. Even then there is a stamina meter that just feels out of place, especially as other ARPGs just feel faster from the get go. I’ve never felt slow or the pace was just pedestrian in Path of Exile, though in-between jaunts of sprinting I felt like a snail moving around Diablo II’s world. Potions not stacking in the inventory is a quality of life feature I’d love just seen added, even though I know the goal is to preserve the original Diablo II experience. I spent so much of my time just passing on potions because I had so many I just didn’t need anymore. Unfortunately this meant I also was passing on more valuable items, like gloves or a new weapon because I just didn’t have the inventory space.

I like the way the inventory is set up as well, requiring some strategy and forethought for how everything fits into your bag. However, it was still annoying having to essentially allocate two to three columns of my bag to potions and scrolls that could easily stack to make life easier.

Diablo II nails the loop that had me addicted over the weekend, though. Running around skewering enemies on the end of my Cold-damage enhanced spear or narrowing avoiding death when surrounded by seemingly an unending horde of enemies kept me going. Even the times where I did die and lost my gear, I never felt as though I was being punished for something the game did, rather it was something I needed to learn from to do better. I learned early on that keeping some gear on hand in the Stash would be a lifesaver later on as well, as I would need to call on it when the time came.

Finding the best loot and upgrading my current kit became something I looked forward to every time I sat down at my PC to play the Resurrected alpha. I could see why my friends were hooked on this game and why they took pride in showing off their builds and gear they’ve accumulated. I was research guides to get the most out of my Amazon class, as well as hoarding skill points to make them more meaningful when I hit a certain level later on and could get a powerful skill to aid me in battle.

Diablo II Resurrected is just plain fun, and it’s something I can’t believe took me twenty years to finally jump into. While I do wish it was faster paced and that some mainstay items in the inventory would stack, the loop is just so satisfying. While I didn’t really understand the story at the beginning – that will just come with time and context, I’m looking forward to playing more.

Interestingly, what Diablo II Resurrected made me do was reinstall Path of Exile, as I needed to get my ARPG-fix in after the alpha ended. I’m not sure that’s what Blizzard intended, but I know when the full game (or future alphas) hit in D2, I’ll be right there ready to get more of Sanctuary in my life. If it hooked me, someone who had never played a Diablo game before, I can only image how someone who spent hours upon hours in the world felt after being able to jump in and experience the remaster for the first time this weekend.

Diablo II Resurrected’s technical alpha converted this Diablo noob into a fan of the game. Hopefully the full experience will live up to this early look when it launches later this year.