It all started on a Monday.

A Monday like any other, a Monday where the sun went up and eventually came down, where people went to work and came home. A Monday where the central PvP island zone in Dark Age of Camelot---Ellan Vannin---was supposed to be clear of enemy zergs and left for members of the game's 8v8 community to enjoy, but ended up being all but empty.

"There's no 8v8 groups out," noted Xuu, a prominent 8v8 player, in the game's official Discord. "We're looking for a fight but everyone's dodging or zerging."

"Don't blame me," Leegen, the Midgard battlegroup leader, replied promptly. "I'm keeping my BG away from the island."

"Maybe your group just needs to fight each other?" someone else offered helpfully.

That comment was initially met with a sullen silence. But from this initial exchange grew the germ of an idea for promoting the 8v8 playstyle from the player community itself. Why wouldn't the best groups fight themselves? And if Leegyn could tell his entire battlegroup to stay away, surely it was within the power of the players themselves to take this a step further to actually promote 8v8 fights? What about an event celebrating the 8v8 playstyle and teaching others its secrets?

Thus the notion of the Ywain 8v8 Roaming Drafts was born.

Led by Xuu and Tuneses, another prominent 8v8 player in the DAoC community, some of the most experienced 8v8 players in the game came together in early April 2021 to organize the first draft. The premise was simple: what if the players themselves could organize an event where anyone, even the most inexperienced player or dedicated zerger, could join in a properly setup group and learn the ropes from the people who play like this every day?

Launched in 2001, Dark Age of Camelot is one of the oldest MMOs still running. Even if the population has shrunk considerably since its heyday of a dozen servers and thousands of concurrent players, the game consistently fills its large-scale PvP zones with armies of players from each of the three realms: Albion, Midgard, and Hibernia. This team-based conflict, dubbed realm vs. realm (RvR), remains mostly unique in the MMO pantheon and provides some of the most compelling, asymmetric PvP in a fantasy setting on the internet.

And at the apex of Dark Age of Camelot’s RvR is the 8v8 scene.

Sure, DAoC caters to many different playstyles, ranging from soloers and smallman teams, to large-scale battlegroups consisting of scores of players, even to so-called "trap groups'' of casters who place carefully hidden mines designed to wipe entire armies in the frontiers. Many of these settings have their own challenges and champions. But it is when players form into carefully crafted groups of 8 players and face off against other groups that the game's most competitive sides are uncovered. This is a seven-dimensional game of classes, specs, abilities, equipment, and tactics, where each player as well as how the team functions as a whole makes the difference between winning and losing.

But this complexity and challenge is also the greatest weakness of the 8v8 playstyle. Breaking into the 8v8 scene can be frustrating because the learning curve is so steep.

"You have to put in the time," said Tuneses, who has been running with her crew for years, on the weekly player-run DAoC State of the Game podcast. "It's not going to happen overnight. We started as a smallman, and grew from there."

Part of the problem is that the established groups, like Tuneses' crew, which is lead by Creaper and plays all three realms, has reached such a high skill level that it is very hard to defeat them for a new and untested 8v8 group. And this inevitably leads to frustration and eventual defeat.

"I have seen so many 8v8 teams come and go through the years," said Rizztal, another leader in the DAoC 8v8 community, in a private Discord chat. "The problem is that the best crews don't really share their knowledge. They should break up and help others instead of literally killing their own opposition."

This idea has gained some traction among the general DAoC population. Surely it would be in everyone's best interest if the most competitive players would split into separate groups?

"But why would we?" countered Tuneses on the State of the Game podcast. "Our crew has been playing together for a long time, and we're all friends. Why would we break up our group just to help others?"

But an idea can be a powerful thing. What if the crews were broken up, but only for a night every month or so? That was the notion that Xuu and Tuneses drew from this discussion.

"It's not any one group's responsibility to split up and make new groups," Tuneses continued. "But it also doesn't benefit us to do nothing about it, either." 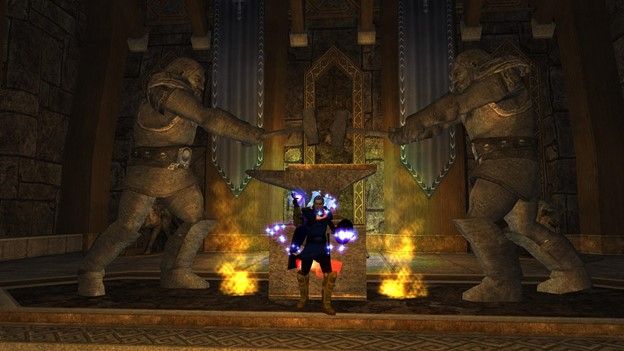 Koxicain played an augmentation Healer, a support class, in OxNor's Midgard group during the April drafts. (Image courtesy of Koxicain#7123 on Discord)

On April 23, 2021, the first installment of the Ywain 8v8 Roaming Drafts took place. With a total of nine full groups led by nine captains, three from each realm, the event involved a total of 72 players and a long list of replacements, organized by class, from which the organizers drew throughout the night. Tuneses herself oversaw the event from her dragon mount on Ellan Vannin, whereas Xuu, her co-organizer, was captain for one of the Hibernian teams. Prominent DAoC streamer Ramik hosted a massive multistream and offered live commentary on the action throughout the evening together with DAoC's community manager Carol and Tuneses.

To be fair, the idea of player-run drafts is not a new one. Xuu, who leads his own crew---nicknamed IRC---on all three realms, has long organized regular "drafts" where dedicated players sign up to form groups to fight it out and learn 8v8 tactics. However, these drafts had been mostly targeted at established 8v8 players. The idea for these new drafts would be much more inclusive and involve everyone, regardless of their experience, class, and realm level.

"We just need a pool of players and captains that won't be salty and want to meet others and kill them," said Xuu on the Ywain Drafts Discord. "Not all of us 8v8 players are actually toxic."

In the leadup to the April drafts, Tuneses and Xuu solicited open signups from the entire DAoC player community. They then selected the most experienced players as "captains", and met with them in a closed two-hour session to form the nine teams. While all of the resulting teams had a backbone of proven 8v8 players, most were at least half filled with people with only limited 8v8 experience who were there to learn and to bring back these teachings to their own groups.

"It's not whether it will work or not," replied Xuu in response to people's concern about outsiders wanting to ruin the event. "We are holding an 8v8 event. It will work. People will be split into somewhat random teams, meet new people, and learn new things. And they will have fun, dammit!"

And, in the end, that's what happened. By all measures, the April drafts were hugely successful, with hundreds of viewers both on Twitch and in-game, and many players learning invaluable lessons on the battlefield. At certain times in the evening, the entire Ellan Vannin zone was filled with warring groups determinedly pursuing each other over its green hills and pastures, with additional groups lined up to watch or recuperate between bouts.

Along the way, a couple of heroes emerged as well. Borgio, the Minotaur Warrior in Farmacist's black-clad group, became an instant crowd hero when he famously got rooted out by Dwale, another 8v8 champion, and then proceeded to throw his weapon and interrupted the Animist before he was nuked down, all the while under live commentary by Ramik and Carol.

"Straight legend," said Deam0 of Borgio's performance after the drafts. "Someone should sign him."

And Kapp, who played a Bonedancer in the same "black" group, received universal acclaim from DAoC 8v8 luminaries who had returned to the Ywain servers exclusively for the draft night. 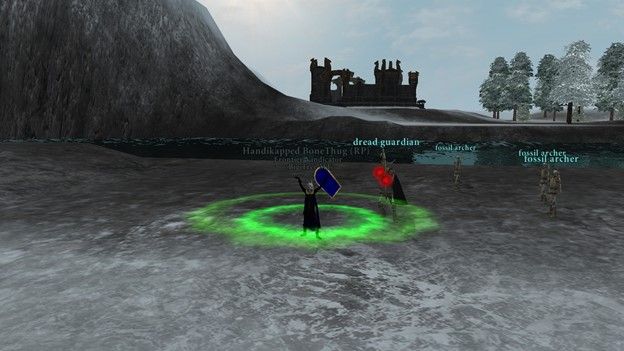 Kapp on his Bonedancer, a Midgard caster class who summons a small army of pets to serve him in combat. (Image courtesy of Kapp#3070.)

"The bonedancer in Farmacist's group is a monster," said Mason, widely seen as one of the top DAoC players of all time. "He's carrying that whole group."

As for the event as a whole, Xuu's confidence in its success was not misplaced. Both Leegen, Herorius, and Rescue, the battlegroup leaders of the respective realms, kept their zergs away from the island throughout the entire evening. In the end, the players themselves kept the sanctity of their own event.

In his "Laws of Online World Design", famous MMO designer Raph Koster, creator of Ultima Online and Star Wars Galaxies, has the following to say about online worlds:

The corollary here is that games are not just the software and content and the company that makes it, but also the online community of players that goes with it. And from this, it is clear that community efforts such as the player-run Ywain Drafts are just as important, if not more so, as the events and expansions that are rolled out by the company running the servers.

The DAoC community, just like any online community, has a toxicity problem, but the mere fact that these drafts were able run successfully speaks a lot to the maturity of the community.

And this is just the beginning. The second roaming drafts took place on May 15, this time with 11 groups, and Tuneses has far-reaching plans to make this a regular occurrence.

"I am planning to organize the drafts around Broadsword's events," she says, referring to the company running the Dark Age of Camelot servers. "We'll keep it going as long as people are signing up for it, both as players and as captains."

Efforts are already underway to produce software to support the endeavor. Nightcapz, another long-time DAoC player, is using his spare time and skills as a software engineer to build a drafts website that will make signups, team picking, and captaining a breeze.

"I needed a pet project anyhow," he says. "And it will make the organizers' job less daunting."

And in the end, isn't this what many gamers are looking for? Ways to help their favorite games succeed and thrive, in whatever small way they can