To say I’ve been anticipating Cyberpunk 2077 would be a gross understatement. I vividly remember watching the very first teaser trailer eight years ago in 2012, my curiosity brimming. Eight years later, here we are. Welcome to Part One of our review in progress.

As we wrote last week, we will not be crunching to get our review out quickly. We are taking a review in progress approach where you’ll see several of these articles, culminating in a final verdict. Additionally, look forward to a technical analysis of Cyberpunk 2077 wherein I’ll dive into the groundbreaking ray tracing technology implemented in the game. This review in progress will specifically discuss my impressions of the open world, Night City, and some thoughts on the PC functionality.

First, I would be remiss if I did not discuss the bugs. You don’t need to look far to see just how buggy Cyberpunk 2077 is in its current state. Indeed, our own Managing Editor, Bradford, wrote up an editorial with his thoughts on the whole release fiasco.

I sympathize with those afflicted by the bugs. I really do. Spending your hard-earned money on a product you were anticipating for eight years, only to have that product be completely borked, is simply unacceptable. CDPR have even acknowledged this.

That being said, I would be completely dishonest if I did not mention that I simply have not encountered any bugs. I realize that sounds crass, but it’s the honest truth. For whatever reason, my experience has been bug-free. I’ve encountered only two issues after more than 20 hours of play. One is a texture streaming issue on a billboard which I encountered once.

The other involves the sound of my footsteps not triggering when I first load into the game. This is remedied by simply loading that save again which takes no more than five seconds while running on my M.2 NVME. This second issue is incredibly fleeting, yet still worth bringing up. But to say this is anywhere near on par with the more egregious bugs people have experienced would be wholly inaccurate and drive a false equivalence. At worst, these issues are mild annoyances and nowhere near the scale and impact of the reported bugs. 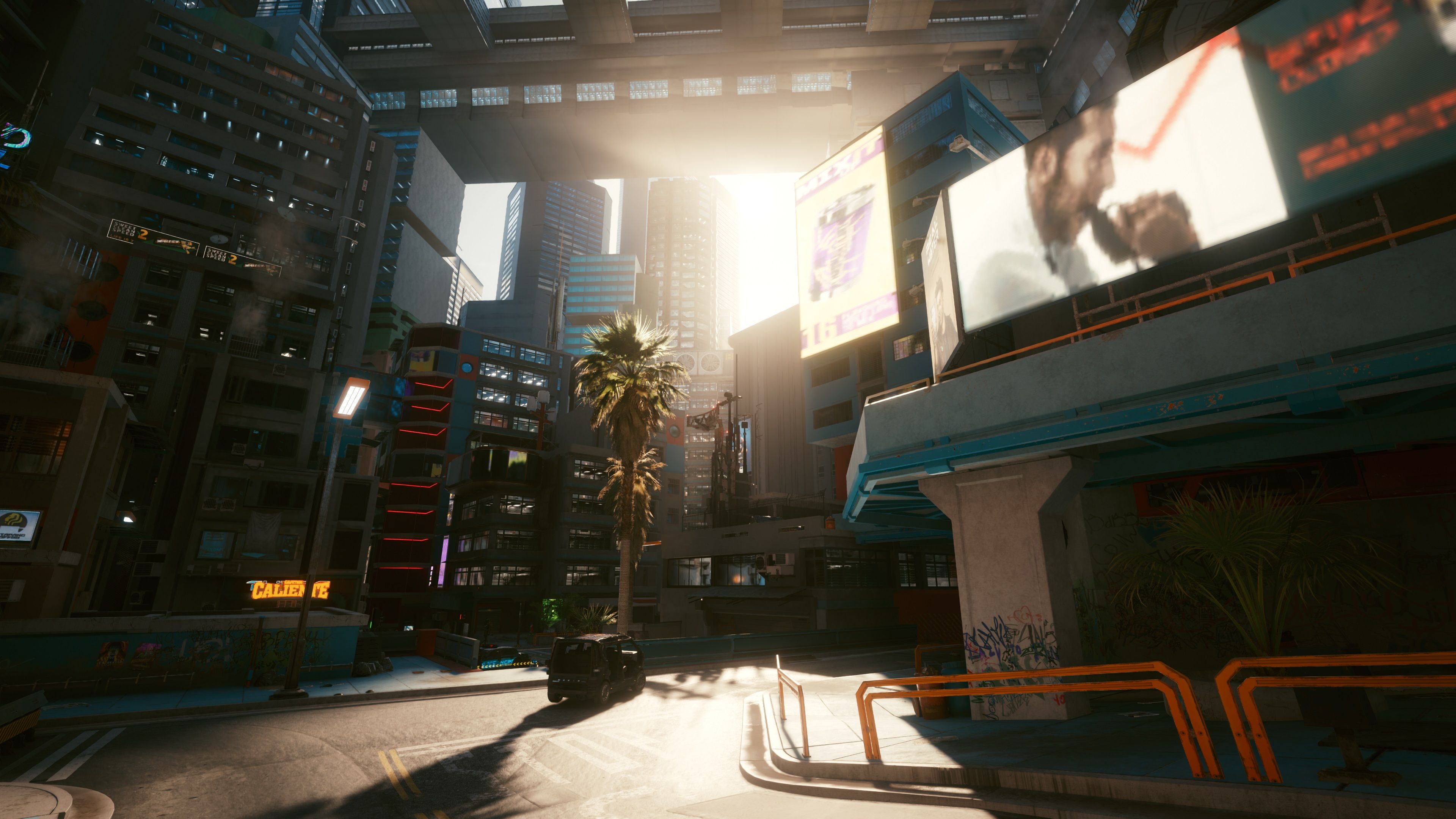 In our group of friends, I along with one other started the game on the Nomad lifepath. We both haven’t encountered any bugs. Bradford began his lifepath as a Corpo and has experienced virtually all the bugs. Initially, we hypothesized that the frequency of bugs may be tied to lifepath, but this was quickly quashed when Bradford’s Stadia playthrough began as a Nomad and he experienced a few bugs there.

At this point, I honestly do not know why my experience has been bug-free. This isn’t to say that this will continue. But as of this writing, after more than 20 hours of play, I simply haven’t experienced any bugs. And it would be dishonest of me not to explain that in a review. I must stress: this review is reflective of my specific experience on my PC. At the end of the day, while I must acknowledge the state of the game at large, I cannot review the experience of others.

The sense of scale in Cyberpunk 2077 is truly awe inspiring. I have played many open world city games, the most prominent being GTA V and the more recent Watch Dogs titles. However, as impressive as those cities were for the time they released, they didn’t blow me away, not even Watch Dogs Legion with its admittedly impressive ray tracing.

Cyberpunk 2077’s Night City is the single most immersive city I have ever experienced. There are many factors which drive this immersion. For one, the sheer sense of scale in Cyberpunk 2077 is unlike anything I’ve experienced before. The world design team have done an incredible job rendering the city in all its physical might. The buildings shoot far up into the Californian sky as they leer over you. 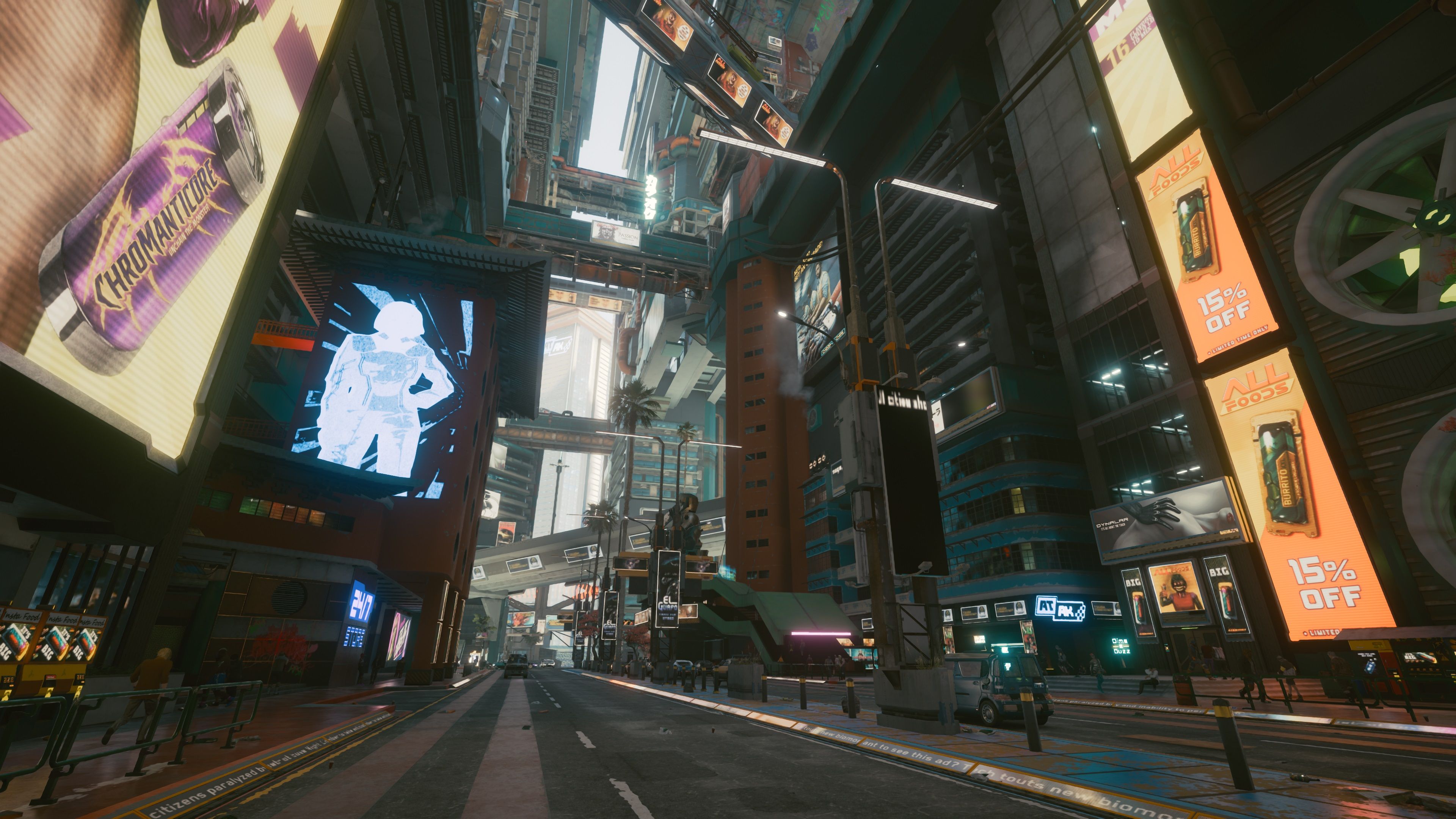 But even here, it’s not the same three or four building assets used over and over again. Virtually every space in Night City appears bespoke. That means the towering buildings aren’t all just monoliths of glass and steel, rather they’re all different shapes interconnecting with each other through walkways, railways, bridges, and more.

This scale extends to street level. On PC, the streets are packed with people and vehicles. There is so much movement everywhere. Streets are littered with heaps of trash, walls are plastered with graffiti, neon signage is everywhere.

Night City is not so much about detail outright as it is about density of that detail. I have never seen anything like this ever before. Cyberpunk 2077’s world has the detail and intricacy of more linear game like The Last of Us 2 but implemented for an entire city. To test this, I often find myself walking into back alleys which are clearly off the beaten path. But even here, this density of detail persists. It’s truly mind boggling. 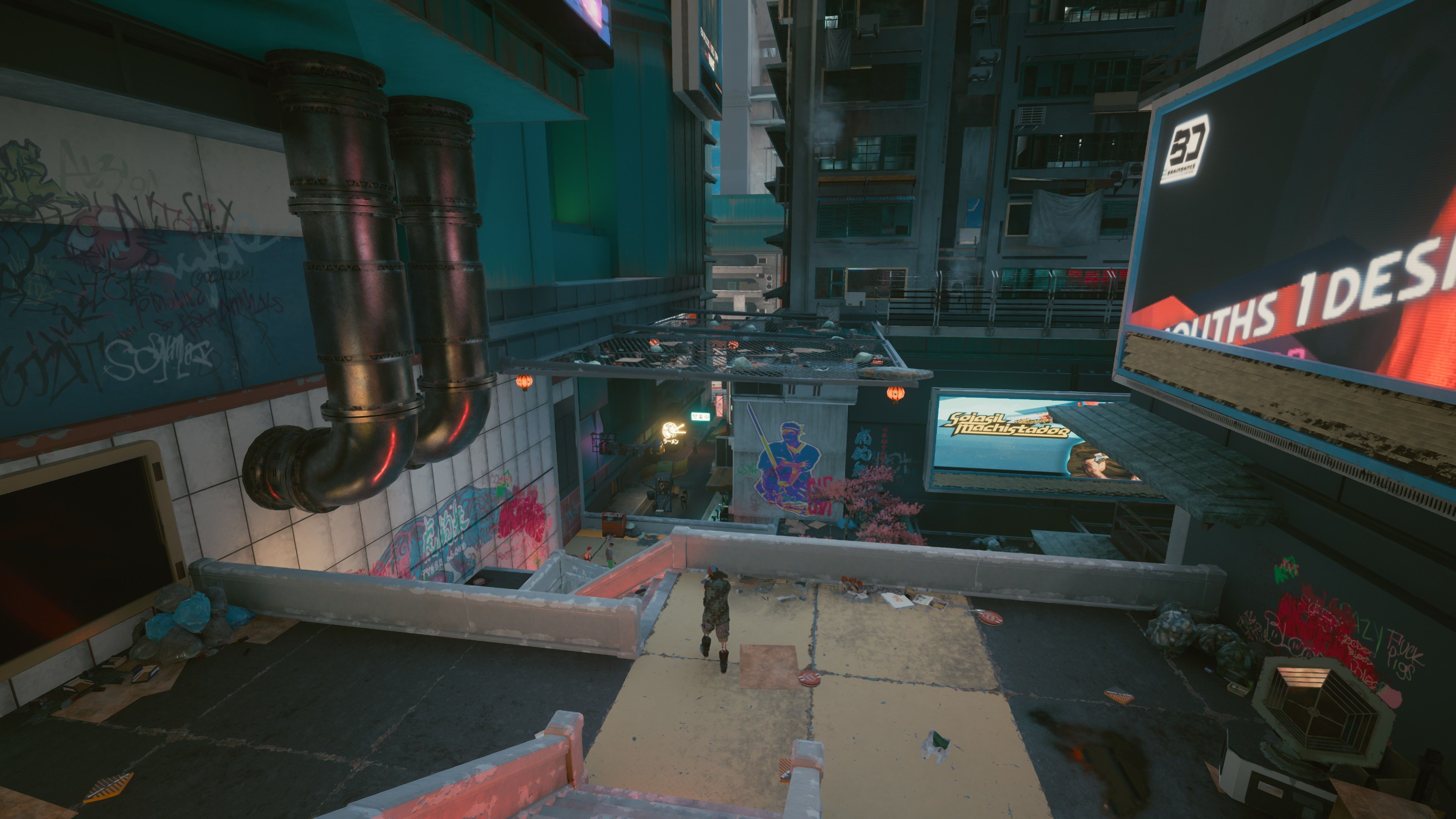 The first person perspective helps tremendously in this regard (for the record, I prefer first person to third person). And in Cyberpunk 2077, it is used as a powerful tool to help sell the scale and immersion. For example, when I stand on the street – any street – I can see the dense crowd and cars in my immediate foreground. 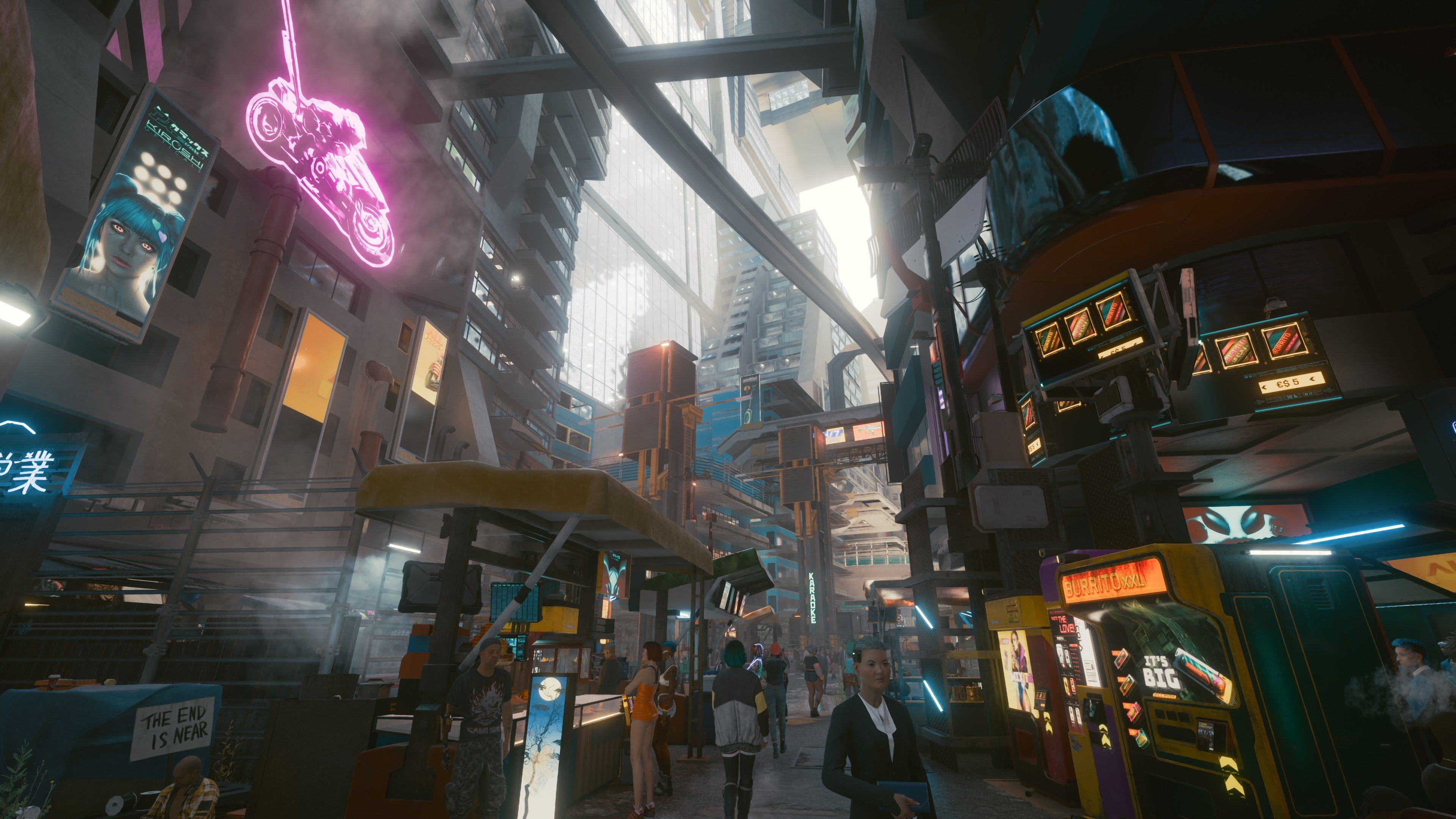 And then there’s the audio. The audio design is exemplary. When paired with the visual density, the ambient sounds of the city, crowds, vehicles, and plethora of ads calling out to you combine to comprehensively trick your brain into believing that you are physically in Night City. This effect is compounded when you get to a naturally dense area like a market. It’s glorious.

For this reason, I find myself walking everywhere in Cyberpunk 2077. Apart from those quests which necessitate a car ride, I walk to my destination simply to absorb the world and truly live in it. I really do feel like a citizen. So powerful is this immersion that when I stop playing for the night, I often need a minute to simply decompress. This sounds like hyperbole, but I assure you it’s not. I am so thoroughly enthralled by Cyberpunk 2077’s world. When you pair all this with ray tracing and HDR, the end result is, quite simply, stunning. Cyberpunk 2077 is truly a masterpiece of world design.

As for my gameplay, I rolled a Nomad focusing primarily on stealth and hacking. So far, this is proving to be quite a powerful combination. I tend to play stealth in any game I can so I’m happy to see that type of gameplay encouraged in Cyberpunk 2077. If I can avoid direct conflict/combat, I will. Note, this isn’t the best stealth I’ve experienced in games. But it’s far from the worst. CD Projekt RED have made sure to provide plenty of options for each encounter to suit the multiple play styles out there. And for me, that’s sneaking my way through, hacking people to make them more vulnerable, disabling camera systems, and the like.

However, for those instances where weapons are drawn, I’ve found the gunplay to be competent. Again, it’s not as kinetic as DOOM, but I’m not expecting that. DOOM is a first person shooter. Therefore, it follows that its key mechanic, gunplay, absolutely must be unimpeachable. Cyberpunk 2077 is not a first person shooter. It’s an RPG. And for an RPG, I’ve found its gunplay to be satisfying. Personally, I’m focusing primarily on suppressed pistols and sniper rifles.

A quick note, this section will not be my usual comprehensive tech analysis. That will be a separate article and video so stay tuned. Instead, I will discuss the broader observations and annoyances I’ve had with the PC controls and overall options.

Let’s begin with the graphics menu. CDPR have done a good job exposing a host of several options. In fact, there are multiple different options just for shadows. I appreciate this granularity as it allows us, PC gamers, to tune the experience to our liking. Additionally, each post process option is broken out. As you can see, I loathe film grain, lens flares, and chromatic aberration. Thankfully, CDPR allows me to disable all of these independently. 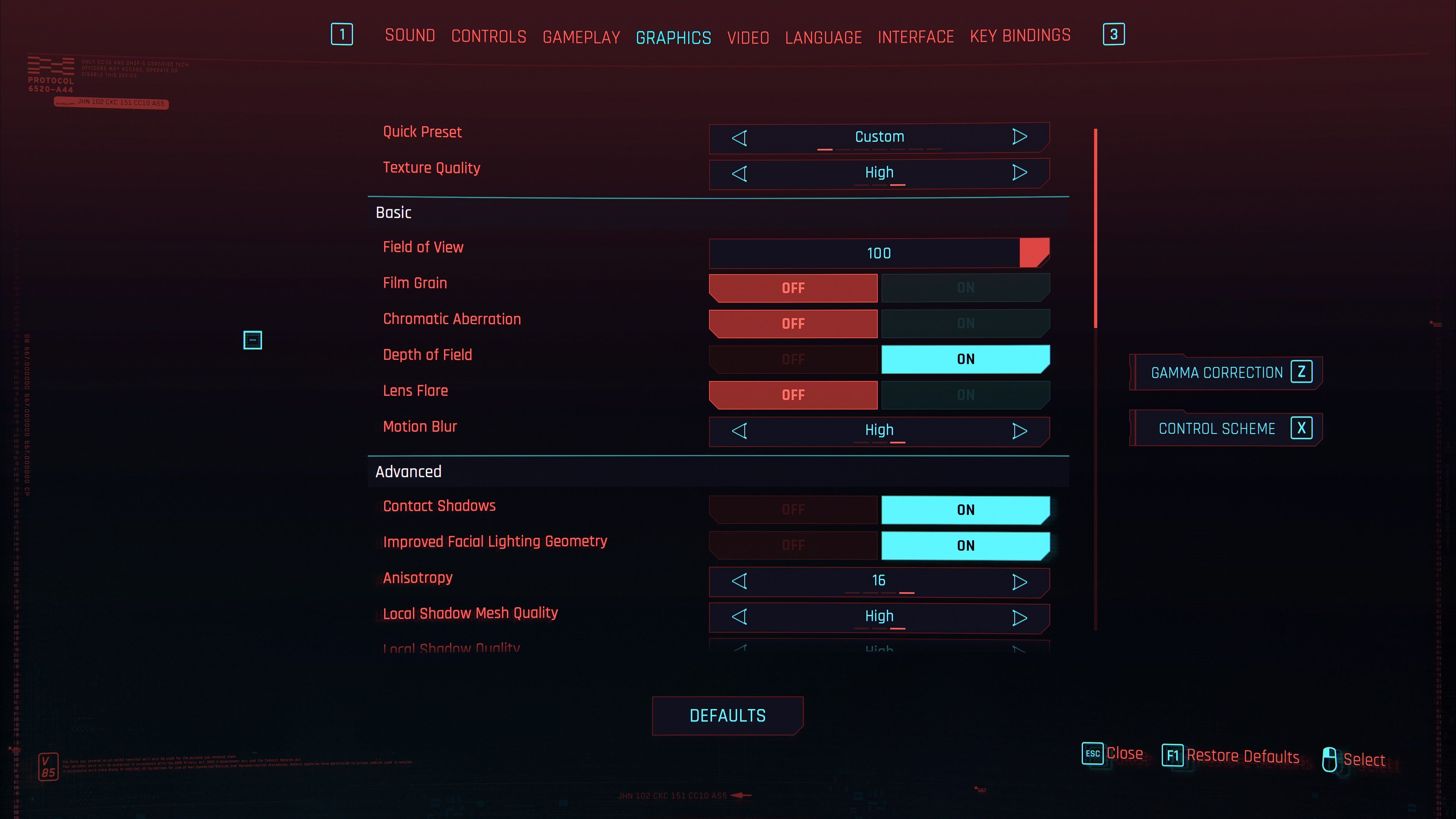 However, it’s not all perfect. For example, you’ll notice there is no antialiasing setting. Cyberpunk 2077 employs TAA, or temporal antialiasing. Given the various graphical techniques leveraged by a modern game engine for handling lighting, shading, and the like, TAA is the only real antialiasing solution competent enough to treat the image.

But in Cyberpunk 2077, there is no way to disable antialiasing. In fact, you can’t even select which type of TAA you’d prefer. While I understand why TAA is required, it would still be nice to choose the strength of that TAA in this options menu. I’m a PC gamer. Expose all the options to me and let me decide what to adjust.

Additionally, the accessibility settings overall are lacking when compared to other games like The Last of Us Part 2 and Watch Dogs Legion. It’s inexcusable for arguably the biggest game of the generation to sorely lack comprehensive accessibility options. This issue is compounded when Cyberpunk 2077’s launch state brought on epilepsy triggers. 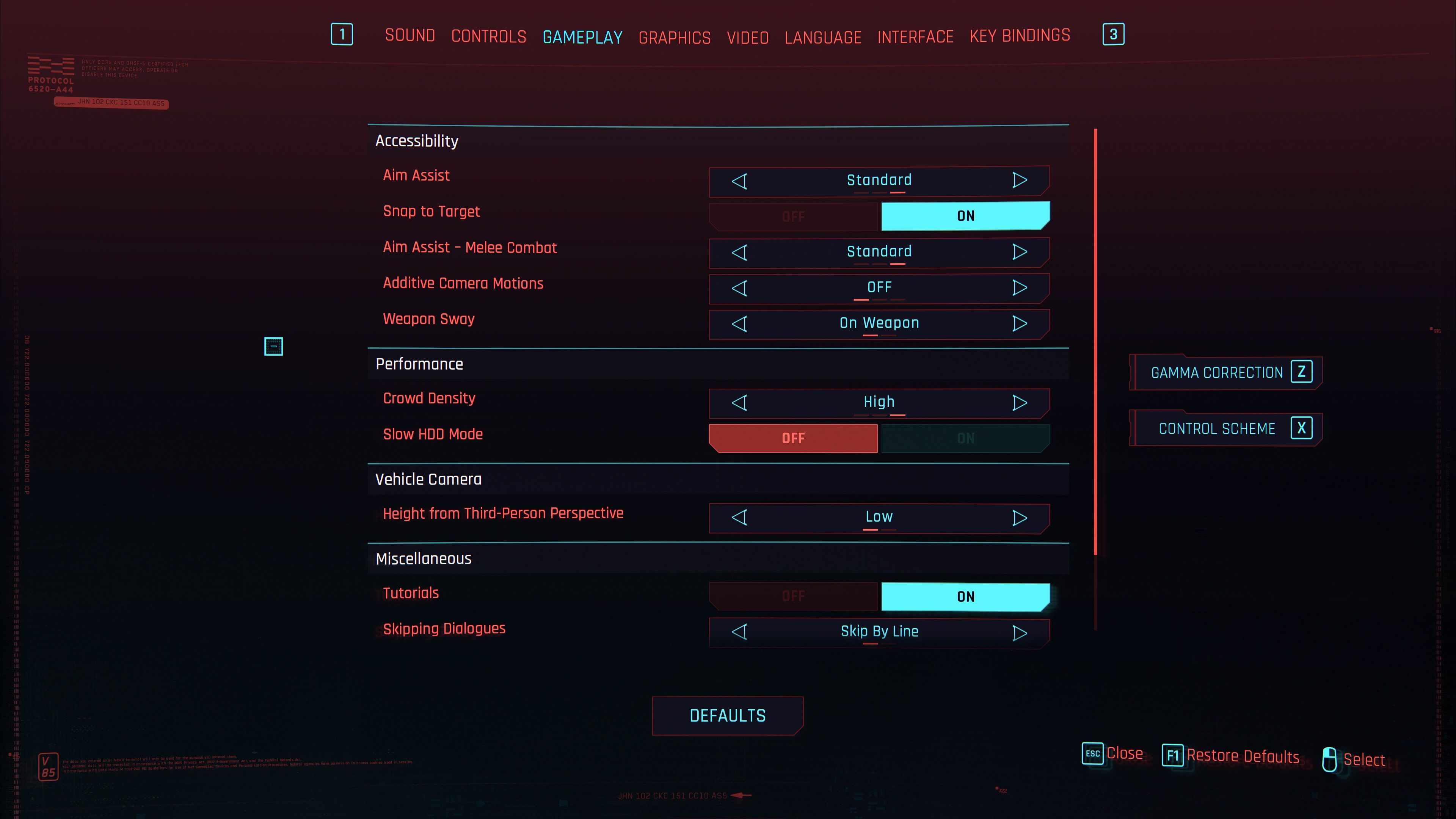 Key bindings are limited to a single binding per command. Again, for a studio which has gone to great lengths positioning the PC version as the premiere version of the game, a lack of secondary key bindings is inexcusable. Moreover, the keyboard controls feel unfinished. For example, I could not find a walk toggle option. I am constantly jogging. In order to move slowly, when following a character during a story moment for example, I have to keep tapping W to inch forward. But if you tap WASD too quickly, you’ll dodge. It seems the only option you have to move slowly is to crouch. What? Why? WHY?! 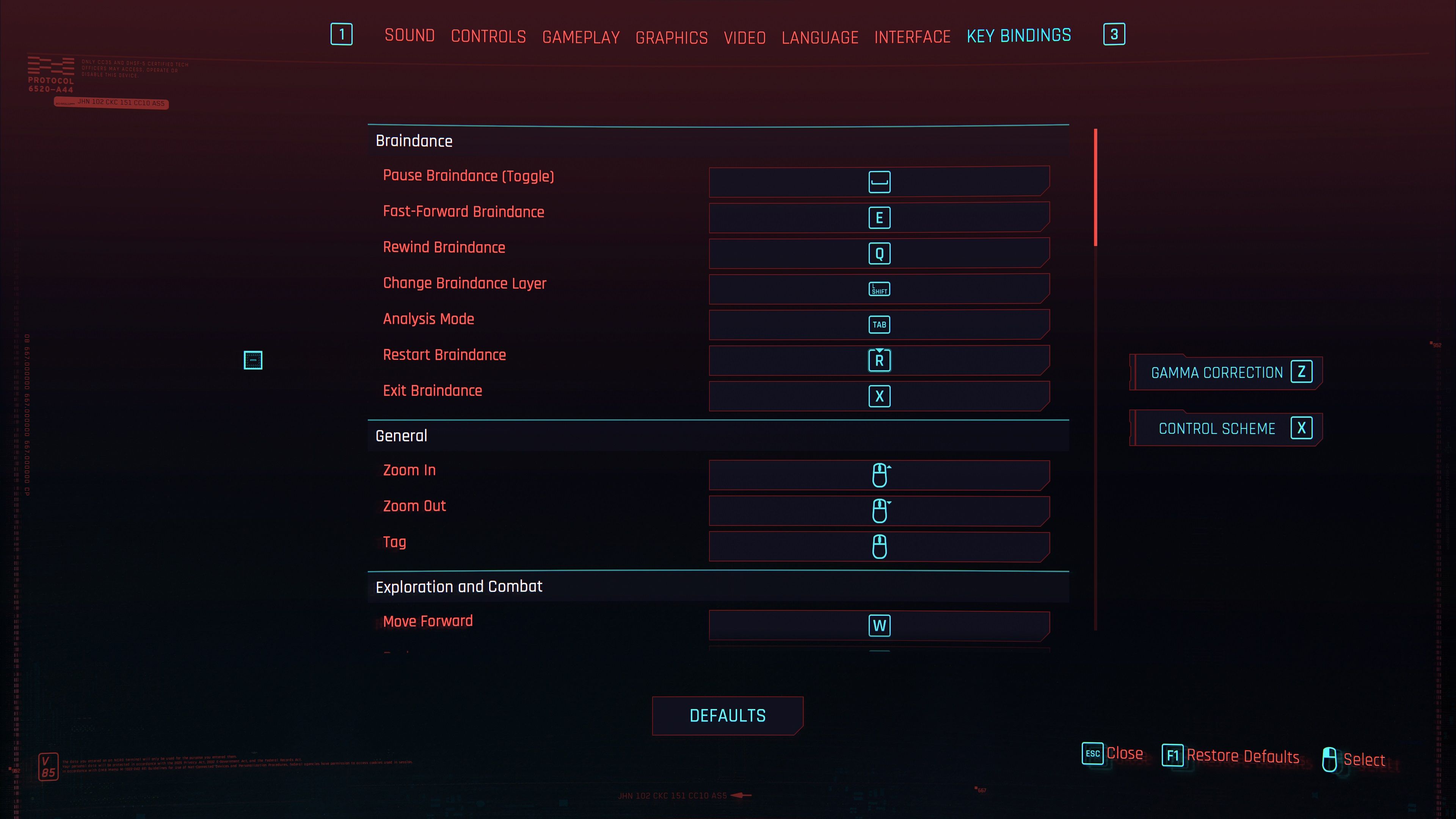 Mouse settings fare a tad better by providing independent sliders for sensitivities. But here again, these fall short. There are no options for mouse acceleration, nor any options to select input like Raw Mouse Input. Come on, CD Projekt RED. 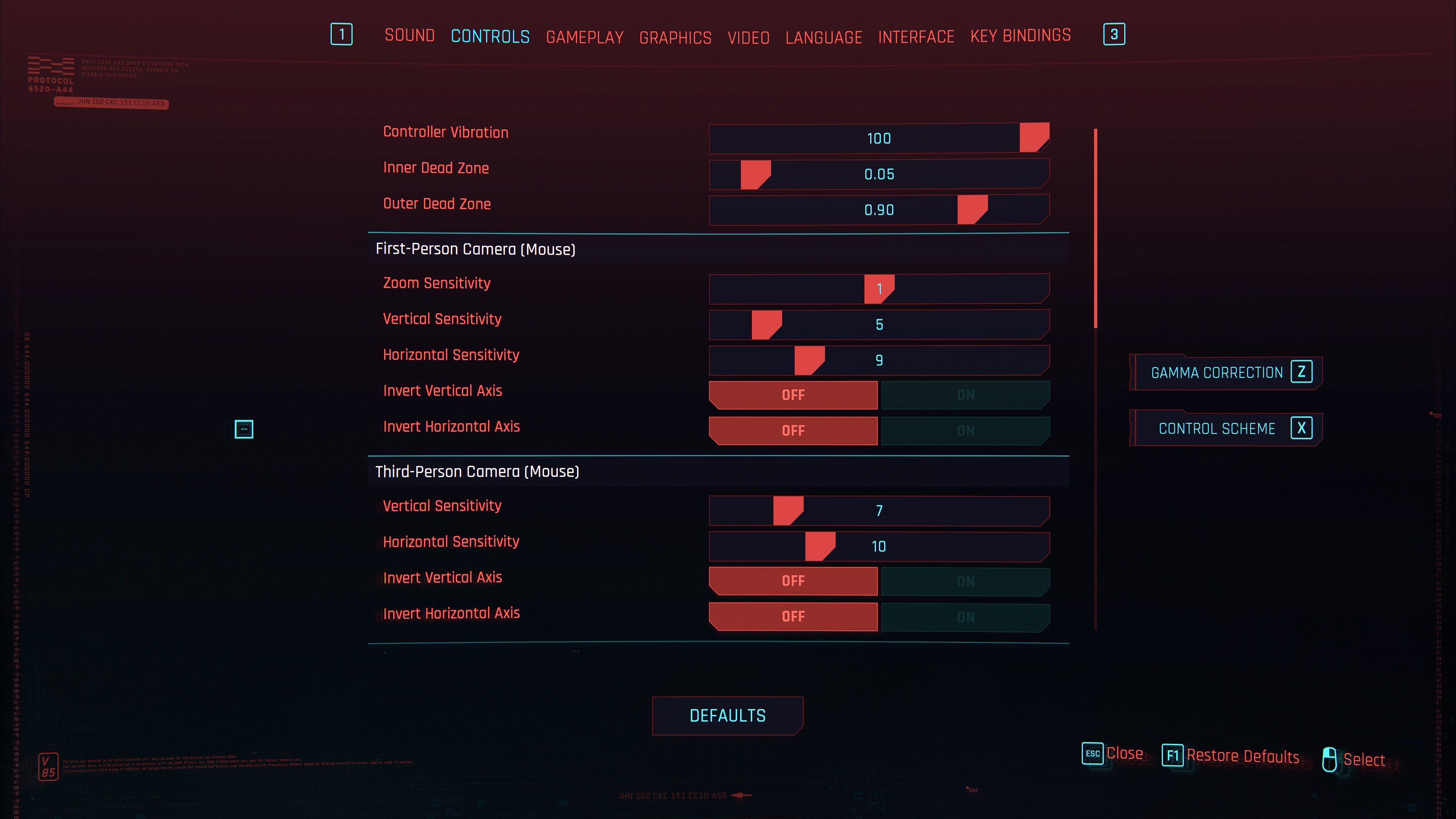 As I mentioned at the top, you can look forward to a tech analysis where I’ll deep dive into the ray tracing implementation in Cyberpunk 2077. There’s quite a lot to cover simply because CD Projekt RED have seemingly thrown in the kitchen sink when it comes to packing this game with bleeding edge technology.

Look forward to an article and, like my Assassin’s Creed Valhalla analysis, a video where you can see the ray traced glory for yourselves. Trust me when I say that Cyberpunk 2077 goes so far beyond the ray tracing in the recently released Watch Dogs Legion. It’s simply the best looking game I have ever seen.

Following this tech analysis, I’ll have a second review in progress where I’ll discuss the various systems of the game, the progression, skills, perks, attributes, and more. After that, we’ll have a final verdict on our hands summarizing the game as a whole.

Stay tuned. Thanks for your patience. We have a lot more Cyberpunk 2077 coverage coming your way.