My wife first brought Chimeraland to my attention earlier this year. My initial reaction was lukewarm as I am feeling a bit burned out with all the microtransactions from other games recently, and I knew this one was also launching as a mobile MMO. But after watching her build a home, explore a vibrant world, and capture various pets, I gradually warmed up to the idea of playing a survival light sandbox MMO. Developer Pixel soft and publisher Level Infinite have succeeded in crafting an experience I am enjoying so far. Let’s dive into my first impressions.

I want to touch on monetization first. It is a free-to-play MMO launching on PC, Google Play, and the Apple Store. So expect pop-up screens when first logging in after creating a character each day and the ability to buy various items/resources/cosmetics in the shop. My initial impression is that prices are reasonable for a F2P game. The optional adventure pass for example has two tiers: Luxury $4.99 USD and Divine $9.99 USD. They appear to provide a decent amount of rewards per level, just be wary of the time left on the pass before buying it to determine if it is worthwhile.

Different packs in the store will give you a head start for certain aspects of the game, like resources, but you still need to rank up your various skills and character level. I don’t want to say much more until I have the time to look more closely at the monetization system. But I will cover it in my final review. I did like that the screens which do appear after login include free daily rewards, notifications of events, and to a more limited degree sales in the shop. Each screen also has a button to click so that it will not appear again that day after repeated logins.

My first couple of days playing Chimeraland on Steam were a horrible experience. The camera stuttering and terrain pop-in were so frequent that I felt queasy during each short session. As of Monday, the developers deployed a new patch, and the game has been a much better experience. I am still seeing some terrain flickering in the distance and have some pop-in as I travel.

But there have been no client crashes, and the numerous game systems have been responsive as I navigate back and forth through the UI. I am running the game on ultra settings with an uncapped framerate using a 3080, and it is a smooth experience.

Chimeraland’s graphics are a mixed bag. I am honestly impressed with the amount of character customization options. There are many races to choose from, and players can create a unique avatar using various sliders to fine-tune facial/body features. It was tempting to make a Grewei or a Drake, but I finally settled on ye old Human to see what I can evolve them into later. (More on that to come)

At certain moments while exploring, I am struck by the visuals when looking at a sunset or up into the night sky. Many of the fantastical creatures look great, and the player character models are well done. But when looking closely at the terrain, textures are of lower quality, and it feels like there is a disconnect between the world's art design and the monsters roaming its surface. It reminds me of EverQuest 2 or Ark: Survival Evolved when you get up close to the terrain. I could see it being jarring at times for other players.

The music and sound are mostly well done. As you would expect, various tracks repeat often, but the more common ones are peaceful and relaxing. Great for those long stretches of building out your house or when gathering. The limited voiceovers are acceptable. The only issue I would note is they speed up a bit during a few quest/challenge instructions. There are also some polish localization issues, and some buttons/quest text doesn’t quite make sense for primary English speakers. Players will mainly run into this with main quests that serve as the game’s tutorial. 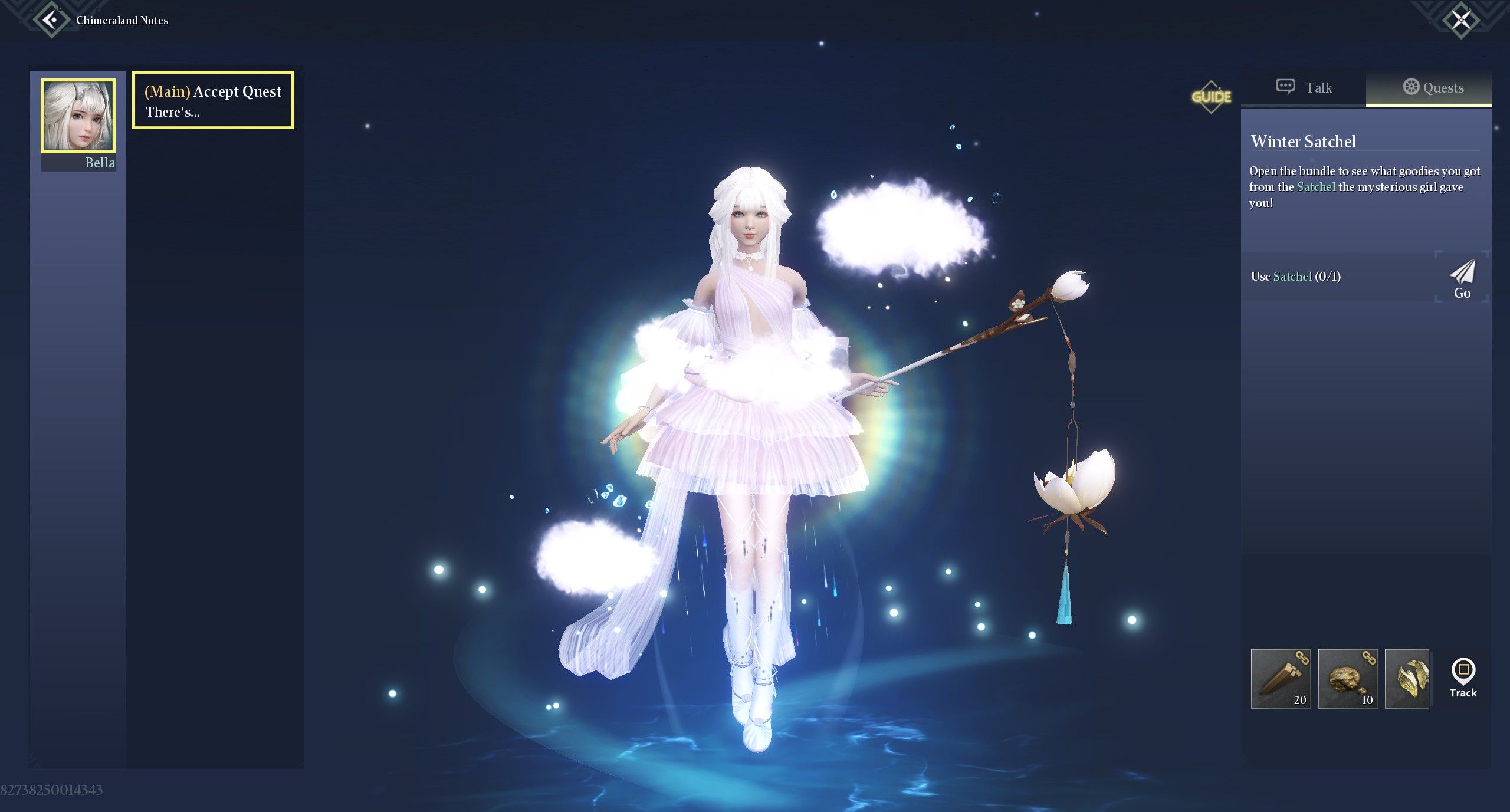 Most new players will likely find that Chimeraland has a steep learning curve. After making your character, you fall from the sky into the area you choose as your starting island. Once on the ground, the main quest (tutorial), given by Bella, throws mechanics and systems at you quickly. While the UI is snappy and responsive, it is not intuitive. It can take a lot of practice to remember where the most important menus are, and the main quest only shows you some features once. Thankfully, if you hit ESC there is a Guide button with short written tutorials about various systems with helpful images. The primary quest experience does smooth out after the initial deluge of basic systems and ends up being extremely helpful.

Combat in Chimeraland is enjoyable, though at times it can feel basic and unchallenging while leveling. Monsters tend to have one special attack that can be avoided easily. Player attacks are based on the weapon wielded, and each weapon has one or two secondary attacks/abilities depending on its quality. So far, I have had no issue taking down enemies of a much higher level if I am willing to strafe while firing. It just takes longer. I am looking forward to hunting rarer creatures at higher levels since the types of weapons, equipped gear, pet/mount, and retainer can all play into how effective you are versus certain types of enemy monsters. It should hopefully be more challenging. The game also has three factions and a dedicated PvP island that I have not touched yet. 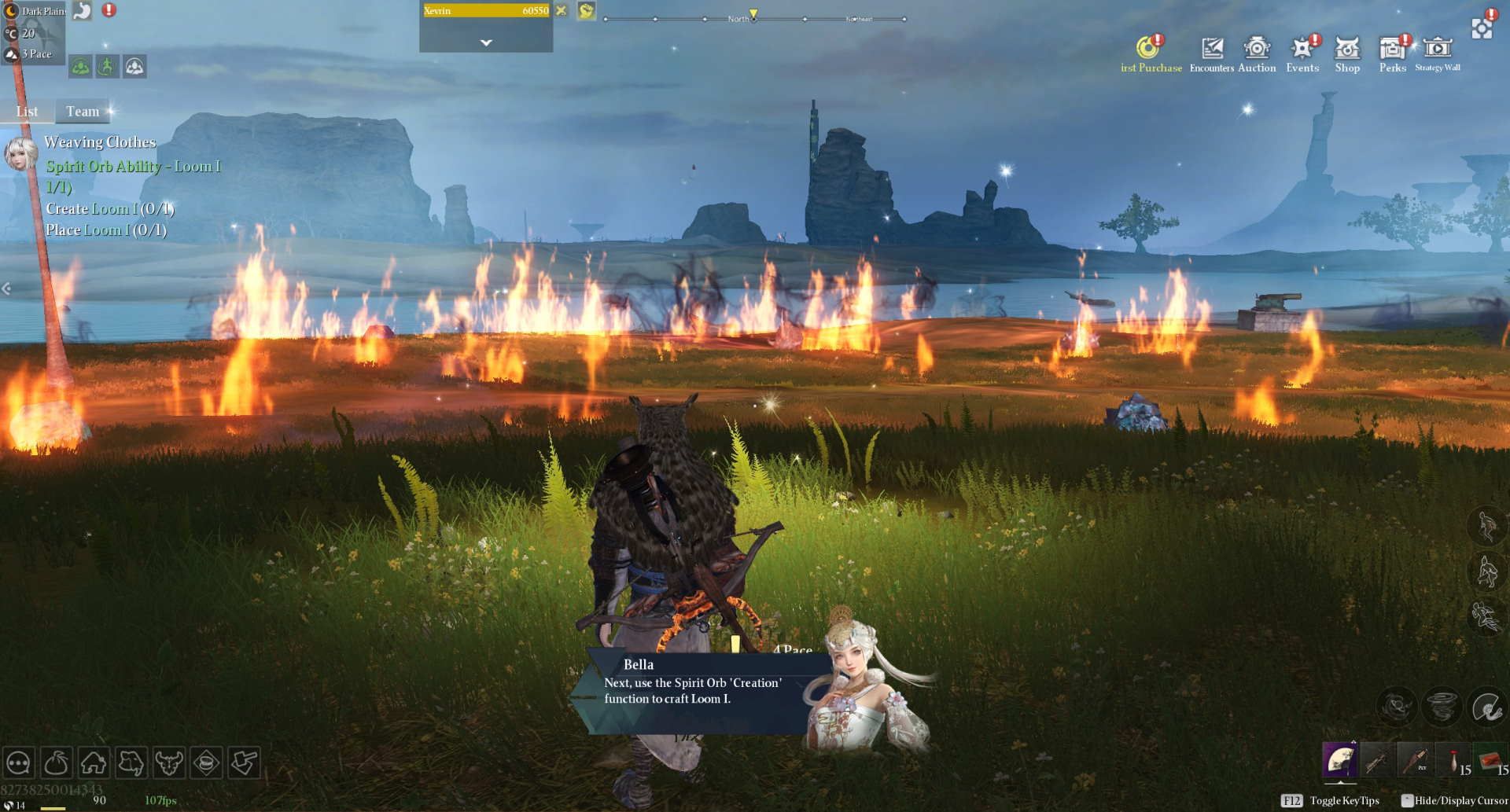 On the survival side of things, I have only had to deal with keeping my character fed so far when it comes to ongoing mechanics. Fullness ticks down over time and when harvesting/fighting. Though I do see that how wet you are and how hot an area is can have an impact. Something I was surprised by was the random environmental hazards, so far I have been flung by a roaming tornado twice and managed to avoid what looked like a large part of terrain catching fire just outside my house.

Initial building in Chimeraland is your standard survival game experience. You gather resources from various nodes and animals. As you gather, the related mastery skills increase for each type of resource and you gain skill points. By spending skill points players unlock new refining options, gathering traits, and stats. Players then set down a Spirit Orb and build out the foundation. You can set it down almost anywhere. The main exception is when you are too close to other players' homes. 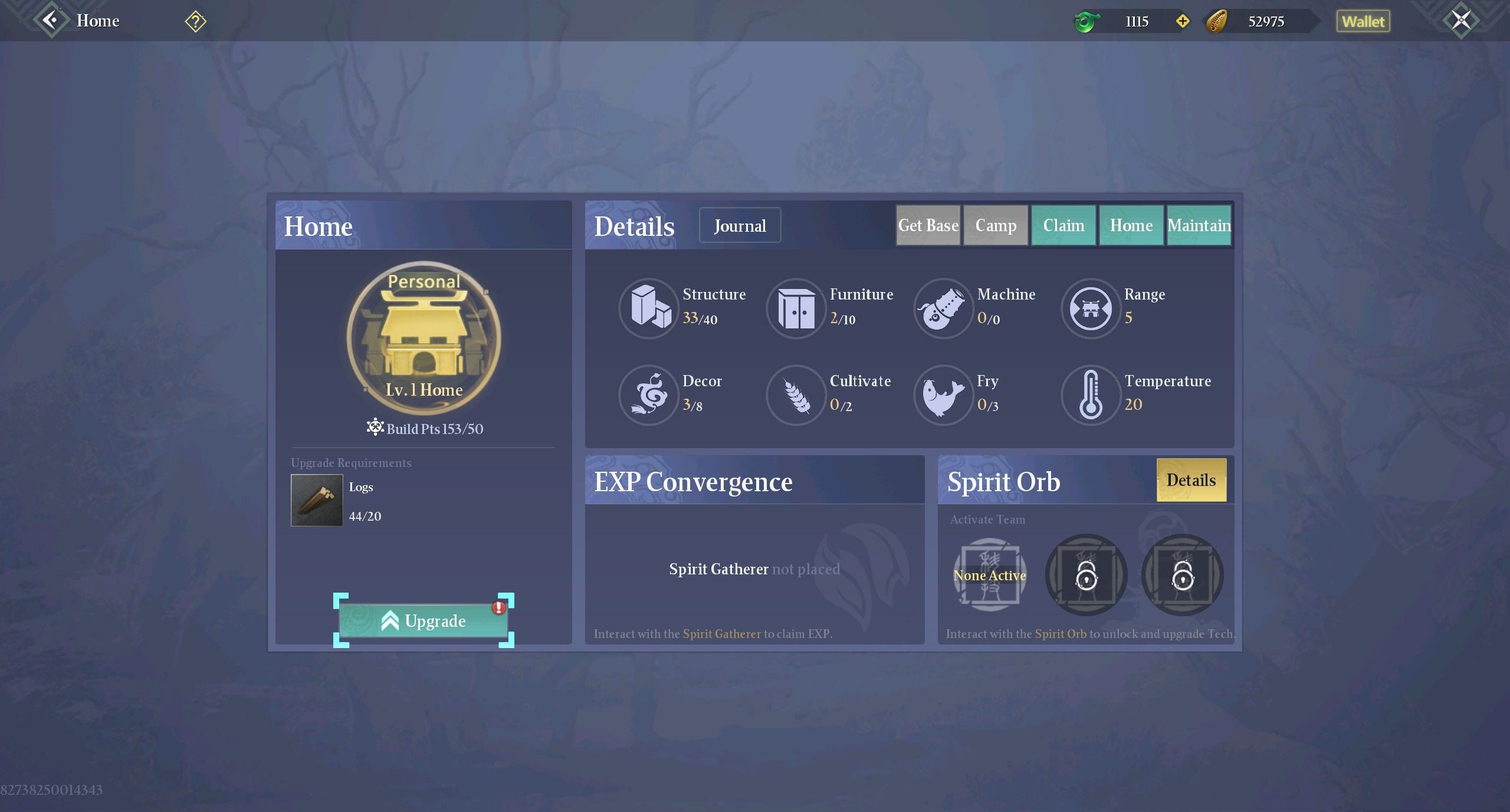 As new building sections and items are placed, players gain build points. These can be spent researching new items and increasing a home’s level. More levels allow players to build out a larger building. The placement of walls/floors/ceilings/doors is on par with other games but could still use a bit of tweaking as they don't always snap into place easily. As you gain more experience additional options open for refining stations, crafting stations, and decorations.

Chimeraland’s evolution systems are what I am most interested in exploring more as I continue to level up. Players can capture creatures as they explore the world and acquire either permanent pet/mount eggs that need to be hatched or temporary summoning stones. When a temporary summoning stone is used, a permanent pet can devour the target. This will provide a chance to acquire a piece of the creature devoured that can evolve parts of your pet, such as the head, tail, or another body part. Players can also create eggs or buy them in the shop that will evolve a pet into a completely new species. A player character can evolve as well by adding traits from other races, like wings, horns, and tails.

While Chimeraland has a steep learning curve for new players, there are a lot of interesting systems to explore. The initial combat is simple and fun, but some may find it boring. For those looking to relax, explore, and build then this may be a great game to try. Just be aware that there are some localization issues and a mobile cash shop, though the pricing doesn’t look too bad at first glance. There are hints and bits of a world story, but this is very much a sandbox experience. Just don't be too surprised when someone goes by on an evolved flying whale.

Full Disclosure: In-game currency and items provided by PR for the purposes of this review.