Freeshards are the bane—and, sometimes, the salvation—of many a MMO. From World of Warcraft to Ultima Online, freeshards are built on server software emulators that allow players to connect with their original game clients to play on a new—or sometimes an old—ruleset, often with no subscription costs. For some games, such as Warhammer Online and City of Heroes, freeshards run by a loyal and dedicated player base allow a game to live on even after the original servers have been shut down. However, for games that are still active, freeshards easily become competitors pulling players away from the legitimate game servers, and often leads to the game companies taking decisive legal action against them. This was the case for Blizzard's wholesale attack on World of Warcraft freeshards in 2016.

The venerable MMO Dark Age of Camelot (DAoC), whose servers have been running since 2001, first by creators Mythic Entertainment, and since 2014 by Broadsword Online Games, is part of the latter category. Since 2003, the Dawn of Light open source project provides a server emulator that allows for people to put up their own DAoC freeshards. A progression of such freeshards has followed; Uthgard is perhaps the most famous one, providing a DAoC Classic experience taking players back to the beginnings of the game. Storm D2 is a total game conversion adding a Diablo 2 ruleset to the DAoC game engine. Alteri provides specialized Group vs Group PvP at a high level aimed at hardcore players. And most recently, the Phoenix freeshard server, introduced in 2018, has become a haven for many players longing for the classic DAoC experience unchanged by the game's many expansions. Since its introduction, Phoenix has risen in popularity, often boasting more than a thousand online players during primetime. 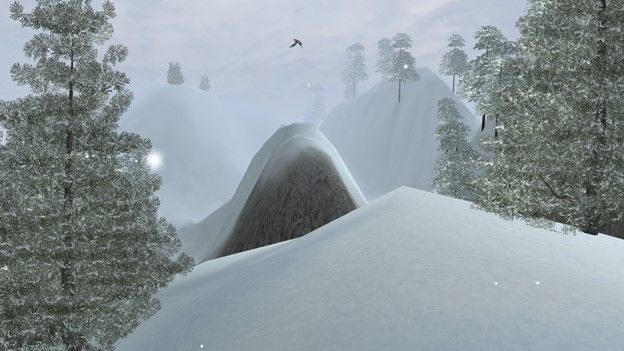 Snow scene from Gripklosa Mountains in Midgard, the Viking realm in DAoC.

To players on the official DAoC servers, Broadsword's failure to pursue and shut down freeshards such as Phoenix is baffling. The freeshards are undoubtedly competing for the same player base as the live servers, and as with any old MMO, population is a continuous concern. If the population drops too far and subscription revenue decreases, Broadsword will obviously have to shut down the service. However, legal action against freeshards is a challenging endeavor, even for a large company such as EA who owns the DAoC franchise.

Many freeshards are hosted outside the United States where copyright laws and enforcement can be a tricky—or at least costly—issue. Freeshards also deliberately do not charge subscription fees to avoid some of these legal tangles. Furthermore, given that Phoenix and Uthgard both use the classic DAoC ruleset, there is arguably a difference in the players that prefer the "old school" DAoC experience to those who prefer the new and up-to-date one. Shutting down classic freeshards may thus not necessarily increase the population on the live servers.

In recognition of the wishes of the player community, Broadsword has announced a new server with the DAoC classic ruleset. This would provide a direct counter to the Phoenix and Uthgard freeshards, and hopefully welcome back a large portion of the player base longing for the classic experience. However, despite this announcement, first made in 2017, no concrete news about when this server will be launched has been offered. The player community is also divided on the issue, with some worrying that the new server will cause the population to be split across the servers past a critical point.

With the exception of the plans for a classic server, Broadsword's method for dealing with the freeshards seems to be one of willful ignorance. At least, that is, until now. Now Broadsword is beginning to take back from the freeshards in what could only be seen as an act of poetic justice: by borrowing from one of their most popular events. 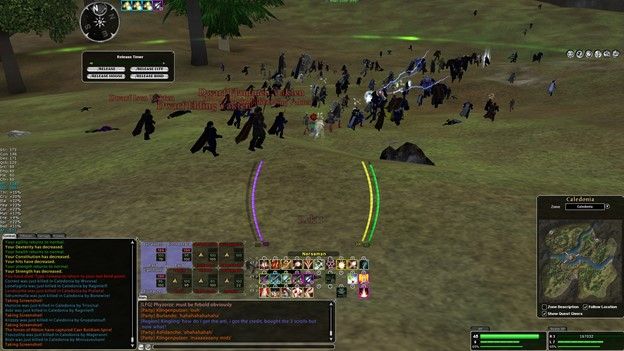 The Mid zerg during the March "Catch Up in Caledonia" was particularly dominant. Image credit: Rheddrian on Discord (Rheddrian#0461).

The "Leveling the Playing Field" event on the Phoenix DAOC freeshard lets players level from 1 to 50 solely through PvP combat over the course of a few days. This event addresses the drudgery of leveling your character as well as alleviates imbalances when trying to compete with established players. In March 2021, Broadsword announced and hosted its "Catch Up in Caledonia" event which directly borrows from the Phoenix event. Over a ten-day period, new characters were immediately transported to the Caledonia battleground, which had been cleared out of any monsters yielding experience. Instead, players were confined to the battleground and only able to level by killing enemy players. With a level cap rising each day, the event forced players to learn how to play their characters through PvP combat.

The Caledonia event in March ended up being extremely successful, with reportedly hundreds of players participating and thousands of new characters created and leveled in the battleground. The event was so successful that the event is now becoming a regular occurrence that will be held several times a year. The highlights were the instant action and the ability to PvP at all levels, and not just at the maximum level. In the end, most people ended up with a level 50 character of at least realm rank 5 or 6 (realm rank yields additional skill points used for improving your character). Some dedicated players reached as high as realm rank 9. Even some Phoenix players returned to the live servers to experience the event for themselves.

Broadsword is running the next round of Catch Up in Caledonia on May 17, 2021 until May 24. If you are a former DAoC player, or if you are just curious about its unique form of RvR combat, this is your chance to try the game for free while competing on a level playing field. All the while you will be delivering some poetic justice to DAoC freeshards such as Phoenix.