In the ever-growing world of MMORPGs, Broken Ranks is a new take on a genre that has been around for a long time.  From the top-down view with cursor-based movement to the turn based quick decision combat, Broken Ranks does a lot of things that aren’t typical for the genre while doing a great job maintaining the MMO feel. Broken Ranks does a lot really well but definitely leaves a lot to be desired and only some of it has to do with the attempted innovations.

The combat is the absolute best part of Broken Ranks. I love the strategy involved in only having 10 seconds to plan each turn. There are two free and two paid slots where you can pre-set your combat moves to make the beginning of combat a bit easier to plan. Specific attacks can be changed any time and it’ll take effect on the next round of turns.  It makes for an always evolving combat that is never short on things to pay attention to. 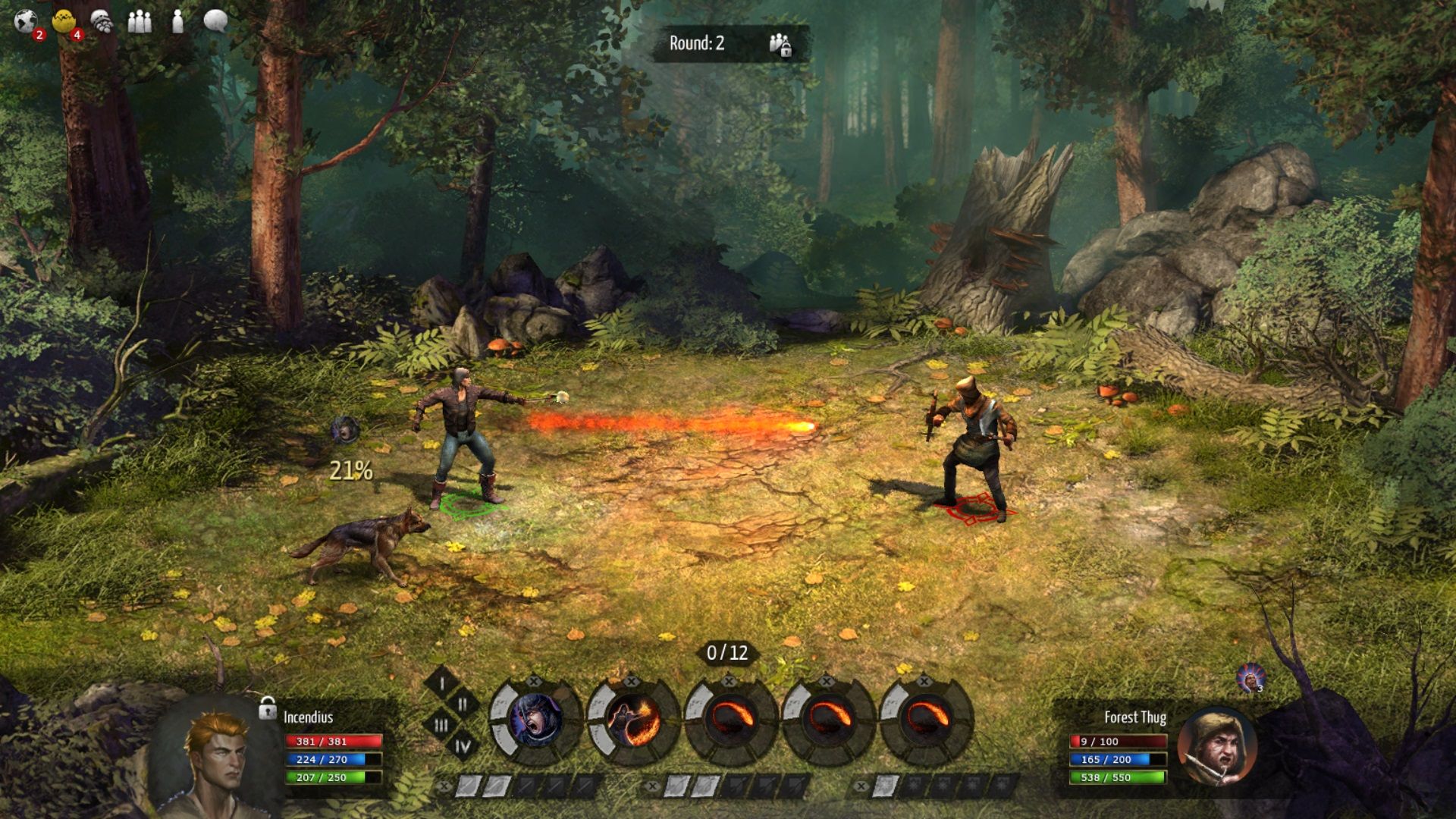 Unfortunately, the combat isn’t perfect.  As much as I love the turn-based strategy and the near constant interaction with my plan of attack, there are a few problems.  The biggest of these problems is items.  I’m playing a Fire Mage which has the ability to do major damage with long distance fire-based attacks.  I have no ability to heal, add mana, or add magic.  Whatever I have at the beginning of combat is all I get.  I must have mana as it is the energy that’s required to perform any attack or spell. If I run out, I’m unable to perform planned attacks.  I definitely need magic as most of my attacks are magic based.  Of course, health keeps me alive so it would be a drag to run out of that during a fight too.  The problem is that items are not accessible during combat.  I can rest after combat and recoup all my lost health, mana, and magic but during the fight I can’t access my potions to get a quick heal.  In the earliest parts of the game while I was still learning, I couldn’t go one fight without the serious potential to die.

Death wouldn’t be so upsetting if it wasn’t also extremely punitive.  I mean that literally.  There is a cost to dying that includes loss of experience points and gold.  In addition, you may have to lose an item or extra gold.  It’s possible to lessen the blow by having a premium account but let’s not rehash the evils of anything that remotely looks like a pay-to-win structure. 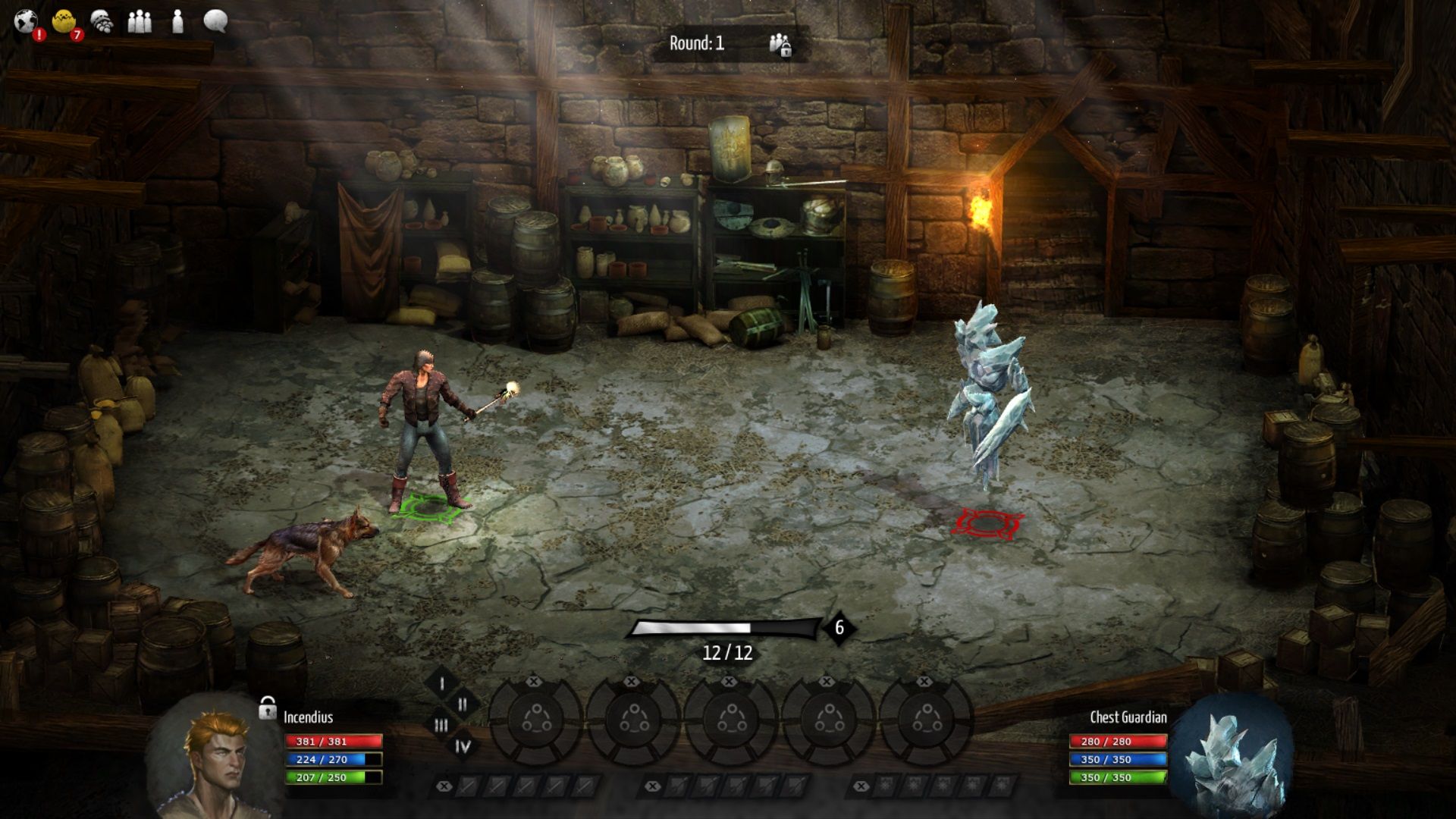 Combat is always in a mini-instance that other players are unable to interact with, but we should explore how Broken Ranks plays when you’re not actively trying to kill someone.  First, the art style is just amazing. The hand drawn art in Broken Ranks makes it easily my favorite game to look at.  There is no option to adjust advanced graphics in the settings but I’m not sure why you would need to anyway.

The top-down isometric play style of Broken Ranks is not technically new to RPGs but it’s definitely not typical of an MMO. Baldur’s Gate, for example, used the same play style. I’m getting used to playing chiefly with a mouse and not having the WASD keys to move around but I think I'd prefer it if I could use keys to move, even if it still wasn’t a traditional third-person view. The great part of having everything accessible with a mouse is that it’s a very simplified way to play.  The disconnect for me is that moving doesn’t feel very precise.  I’d feel better if I had more control over my character’s movement.

There are two different ways to approach side quests. Of course, you can always take side quests as you’re going through the main story. You can also wait until you have nothing else to do.  In MMOs that I’ve played in the past, there are simply tons of quests to choose from everywhere you go and many of them are just turning you into a glorified messenger.  They’re great for XP boosting.  In Broken Ranks, there just aren’t that many side quests in one place.  The side quests that do appear are normally more involved than just running over to talk to a person.

This only matters because the story will actually pause for you to get caught up on levels.  For example, when I was level 8, the story paused and said I needed to go aroundmy gear and then come back when I’m level 13.  Oh, how I hated it! I spent money on a premium account just so I could get the XP booster to speed this up.  I am all about stories but I do not like grinding for the sake of grinding. Just give me enough XP and gold in the main storyline to get to play without sending me on a wild goose chase!  No one else will have a cheapened experience by allowing players like me to skip the grind. 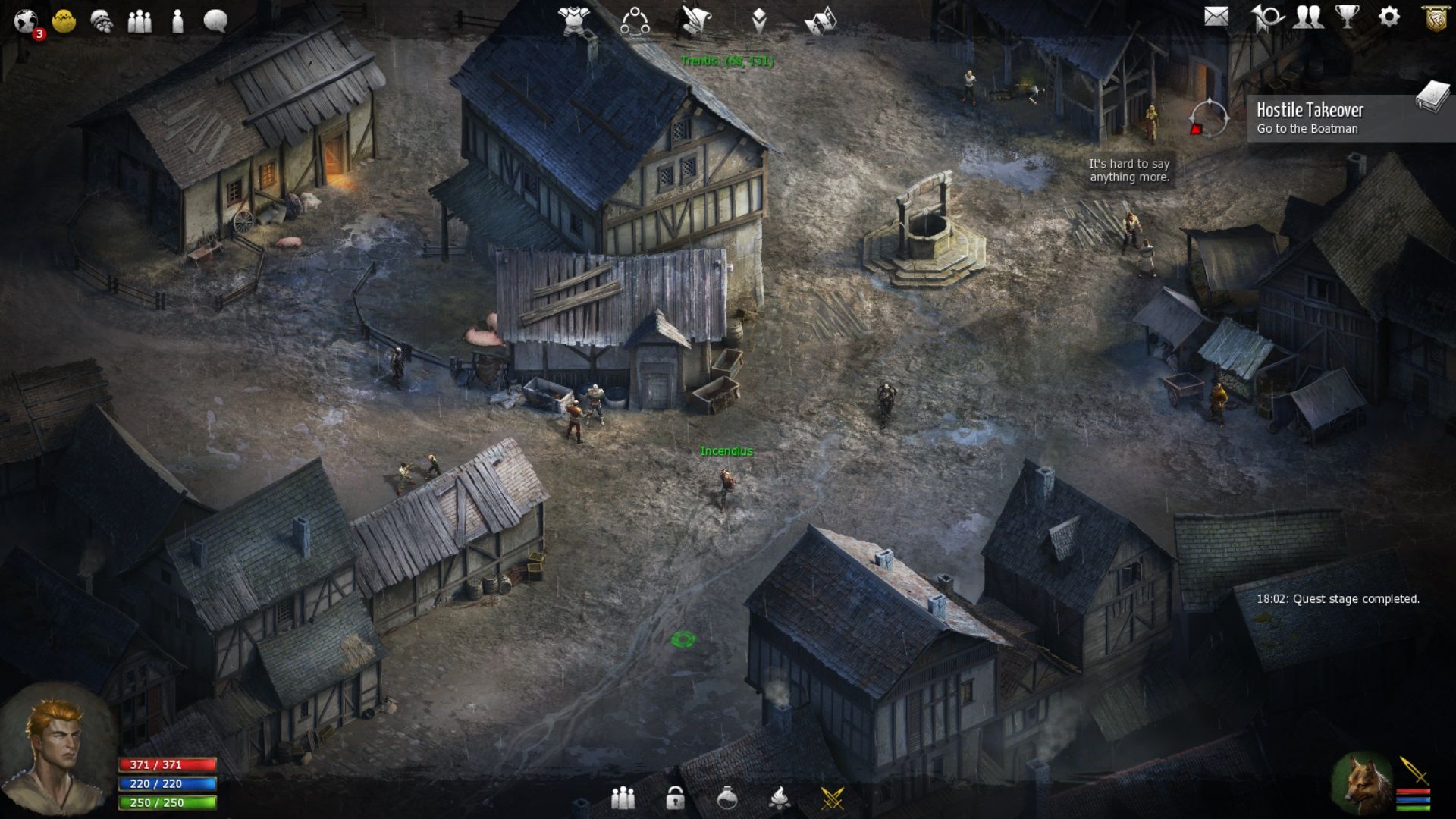 Quests of any kind also have choices that need to be made that shape your character’s…character.  Your choices may extend a quest line.  Let’s talk about that for a minute.  One of my biggest criticisms of games that use choices is that often the choices feel like they don’t matter.  Maybe it changes a line of dialogue but it doesn’t fundamentally change what’s about to happen in the game.  Broken Ranks on the other hand gives you a choice and it could completely alter the trajectory of a quest.  Right now, I’m in over my head working for a pack of bandits in a cave because I thought it’d be a good idea to rescue a girl after seeing her get kidnapped.  This one thing is the single best part of doing any kind of quest.  I can’t remember a time when choices ever mattered in an MMO. Knowing that the choice I make actually affects my game is amazing

There are some side quests in Broken Ranks that would be better to be called jobs.  These jobs, indicated by a blue arrow overhead instead of a yellow one, can be repeated.  For instance, there’s a guy who doesn’t like Zed (creatures that looks like an imp) and hires you to go out and kill some.  There’s 30 minutes to kill 10 Zed which is more than enough time and he’ll give you some gold and experience. This would be great except for one thing. You can do it again in 15 minutes.  It feels like this is supposed to make up for the fact that there are not many actual quests to choose from but the 15-minute cooldown which affects all jobs, not just the one you completed, only serves to slow you down even more. It’s absolutely bonkers to me that there is so much restriction in how a person can play and enjoy Broken Ranks. 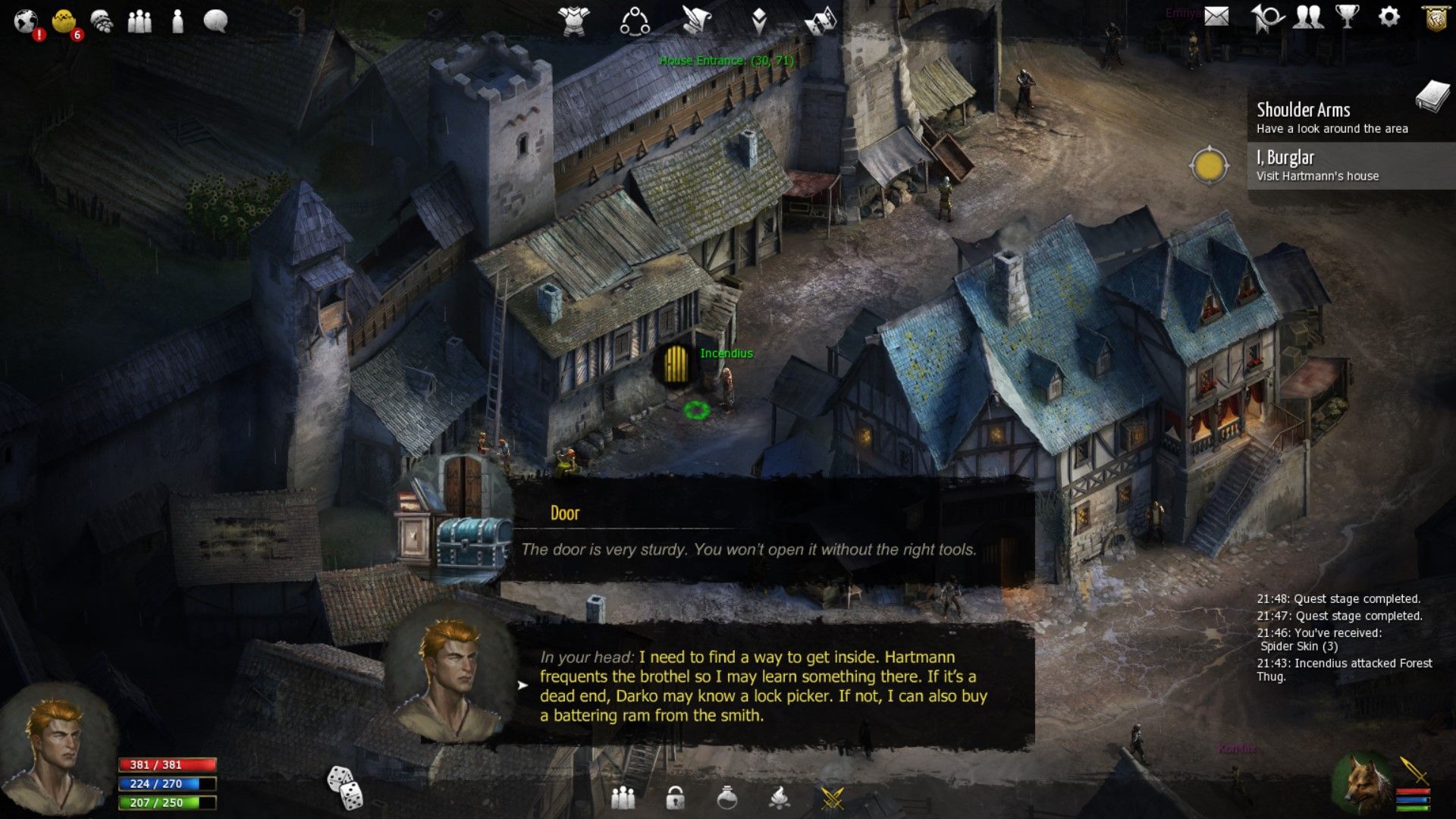 It’s still early having only played about 18-20 hours into Broken Ranks so far.  I look forward to updating you with my thoughts on joining a group, PVP, and crafting.  I think Broken Ranks has a lot of untapped potential and I’m hopeful to start seeing that really soon.  I’m having an incredible time enjoying the main storyline.  It’s engaging, fresh, interesting, and the more I play it, the more I want to see. I really want to come back with a better outlook because what Broken Ranks does well, it does really well. Unfortunately, the entire game can’t ride on the coattails of a good story especially if players are going to be asked to invest 60+ hours into it. Only time will tell if Broken Ranks is as good as its potential.