The long, long awaited Legendary item revamp is finally coming to Standing Stone Game's Lord of the Rings Online.  And there was much rejoicing...right?  This past week saw the first public look at SSG's third iteration of one of the games most integral systems in the game.  Legendary items have been a staple in the game since the Mines of Moria in 2008, the game's very first expansion.  Legendary items were marketed as a weapon that would level up with you, consistently growing and getting stronger.  The reality fell short of that, however, as the weapons and class items had their own levels that corresponded to character level, and it was prudent to exchange LI's every 5 character levels or so, although not absolutely necessary.

Imbuement entered the game in 2015 when the max level was 100, and the item level of LI's stopped there.  Originally, according to the developer diary published by Frelorn, imbuement was intended to completely replace the system.  However, at the time there were not enough resources to implement a full replacement, and, as we found out later, the coding would not allow the imbuement system to work past level 100 items.  The workaround then, was to increase the levels of imbued legacies for those level 100 legendary items, creating a significant grind to max out LI's.

So, what is changing with this new LI system?  The first, most obvious change, is the terminology.  Instead of titles, legacies, and relics, we now have traceries.  Also, legendary items come completely absent of any stats outside DPS and base damage.  There are 12 total tracery slots on weapons and 13 slots on class items.  11 are unlocked on a level 121-130 item, and it has been noted that tracery slots on lower level items will start with fewer open slots and the rest will unlock as the character levels.  It is guessed that the last slot will unlock at level 131+, but there has not been confirmation for that.  As of right now, traceries that you acquire are bound to account, according to Vastin, systems designer, during this past Friday's +Cord of the Rings stream.

While legendary items will no longer be differentiated by ages, traceries will have four different drop rarities: Uncommon, Rare, Incomparable, and Legendary, similar to how other items in game are categorized.  While Vastin did mention there would be a barter NPC to get particular traceries a player might be interested in, it is still unclear exactly how players will obtain traceries while just playing the game.  There are a few new currencies that will be used to barter for specific traceries.  Ancient Scripts are the new base currency.  They will go into your wallet if you have one, and they will be bound to account.  There will most likely be a cap on them, as on Thursday during the preview, there was a cap of 1000 scripts implemented.  However, when this was brought up in the forums, Raninia, the new producer on the SSG team, stated that the cap was subject to change.  For the higher rarity traceries, players will also need a Cracked Tracery.  These are level-banded currencies that are currently needed for Incomparable and Legendary traceries.

Reforging is still an element of the LI system.  It is no longer weapon level based, but character level based.  Reforging an LI will increase DPS/HPS and the LI's item level, up to a range within your current character level.  When I reforged my Hunter bow LI on a 130 character, the LI item level went to 445, and the traceries then start at item level 400.  The LI item level corresponds to how high tracery item levels can be.  So how do you increase tracery item levels?  This is where the grind sets in.  Instead of Scrolls of Empowerment, now there are items called Enhancement Runes.  These are used to increase tracery levels.  As of the preview, you could only use one Enhancement Rune at a time on level 130 items, just like current SoE's.  It has been hinted that there could be Enhancement Runes that will increase multiple levels, but it probably will not be available at launch.  Cordovan did also state on the forums that there was tech in development to allow the use of multiple Enhancement Runes at one time, similar to how IXP runes can be added to current LI's.

Enhancement runes *also* come in different drop rarities, same as traceries.  The different rarities can increase a tracery's item level to a particular point.  All four Enhancement Rune rarities can be used in the first few levels after a weapon has been reforged, however each lower rarity rune drops off at a certain point, i.e. Uncommon runes used on a level 130 LI can go from tracery level 440-420, Rare can go from 400-430, up to Legendary, which can go from 400 to cap.  There are two things that should be noted about Enhancement Runes.  First, they will not increase the rarity of any tracery, so you cannot use one to change an Uncommon tracery to a Rare one.  Second, these runes will only enhance the stats on a tracery.  Players will not be able to upgrade damage percentage, area of effect targets, skill damage, etc. 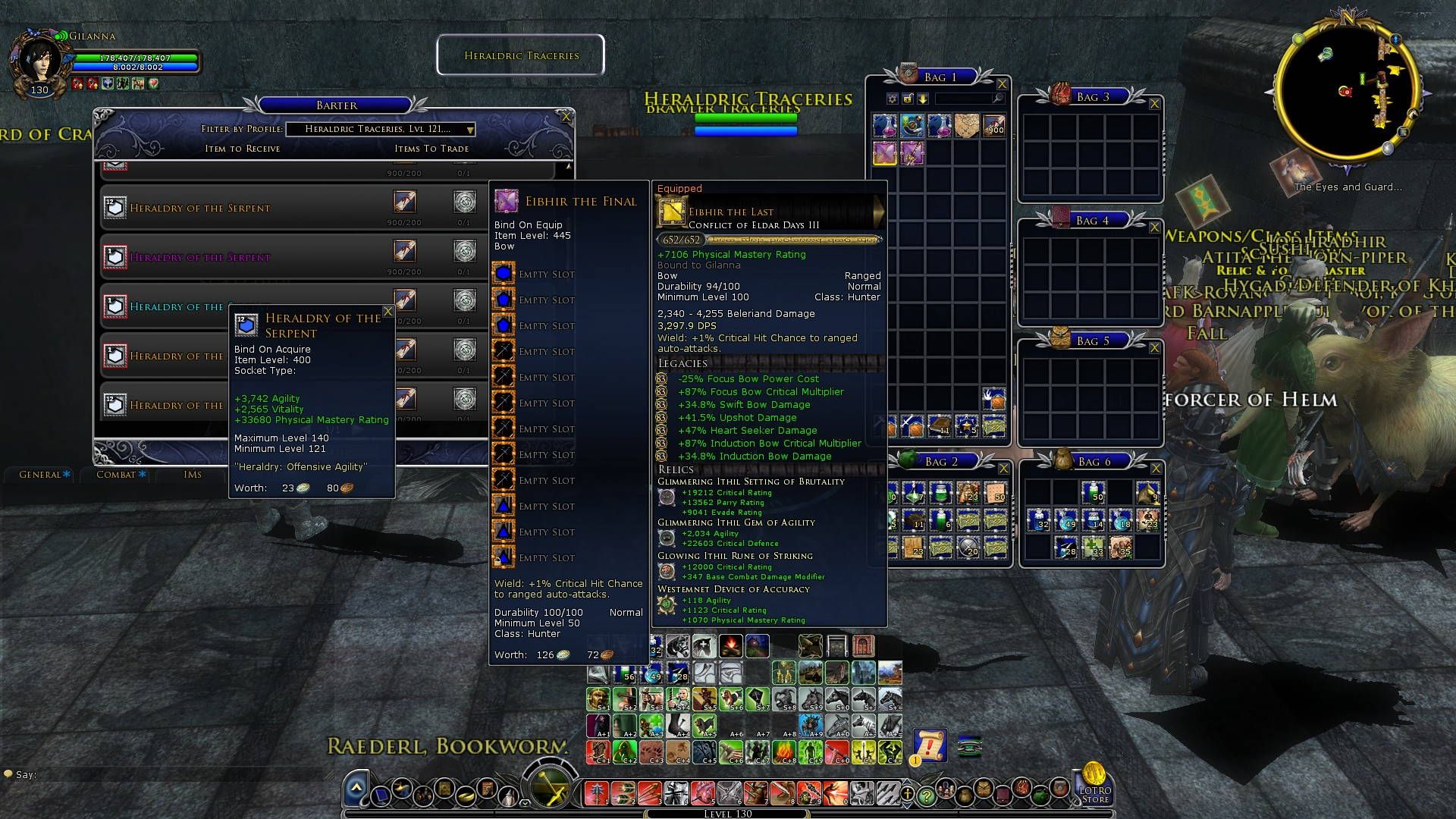 I was unable to check DPS parses and damage differences in practice, since someone was being a troll and killing the training dummies while I was on Bullroarer, but looking at the difference in base damage for each skill between my old LI and the new LI with just Uncommon traceries, the new LI did significantly more damage on each skill by at least 10k.  Not only that, there was a 1.5k bump in straight DPS.  Overall, I will say that is an encouraging sign.

One last thing to mention is what we know about what happens with all the current LI stuff players might be holding onto.  While not everything is hammered out, Vastin and Raninia both all but confirmed that there would be some sort of compensation for things like Scrolls of Empowerment and Star-lit Crystals.  Whether that would be bartering them, or disenchanting them for the new currencies isn't known, but they won't be completely useless in this new system.  Not only that, Heritage/IXP runes will still be useful when the Legendary Reward Track is debuted, tentatively with the launch of Gundabad.