While the rest of the MMORPG world has been chopping down trees, mining for ore, and shooting muskets at one another in the recently released New World, I have been drawn to a smaller world. You might even say it’s tiny. Yes, I’m talking about indie developer Might & Delight’s TMORPG (Tiny Multiplayer Online RPG), Book of Travels. After multiple delays, Book of Travels was finally released into Early Access today (October 11, 2021). I got a head start with Book of Travels and have been wandering Braided Shore for a few days now. And I’ve got to tell you, I think this tiny RPG is going to be pretty big.

Book of Travels is all about discovery and exploration, and that discovery starts with character creation. Unlike the big MMOs, Book of Travels takes a minimalist approach in explaining how everything works. The forms (think vague classes), traits, talents, and other choices you make during character creation feel more like a general discussion about what you want your character to be when it grows up than actually choosing specific skills and abilities. A perfect example would be the description given for the Naval Upbringing option: “You spent most of your youth on ocean-going vessels learning the language of the waves and the weather.” What does that even mean? Is it good? Is it bad? What skills does that give my character? I have no clue, but at least it sounds cool, so let’s go with it! 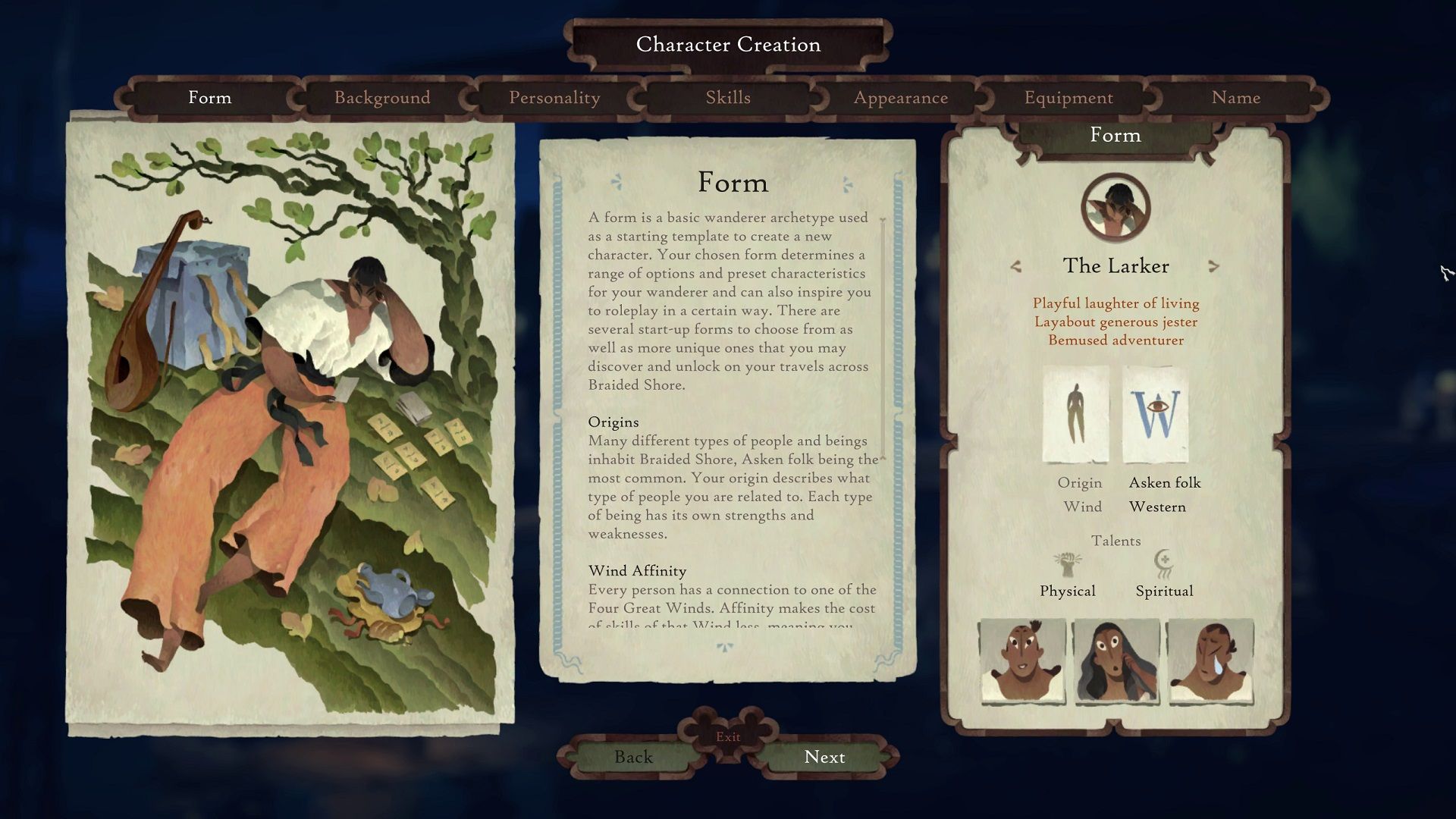 In that same fashion, the last choice I had to make during character creation was to pick how my journey began. Four options are given, with each one opening up one or two points on a compass. North, South, East, West? Is one better than the other? I had no idea.

I’m not complaining about the free-flowing nature of the character creation in Book of Travels. Quite the contrary. The freedom granted is actually a breath of fresh air. Players of MMOs have become too focused on maximizing their character’s power, forever chasing the Meta on their way to max level. Quests, NPC interactions, and gear aren’t the prize; they are just the means to an end.

Book of Travels is the antithesis to that description of modern-day MMOs. Not because changing the M to a T results in a smaller server size (it’s seven players if you’re curious), but because BoT is all about discovery and freedom of choice. Just like in real life, the choices you make in BoT can come with consequences. Those consequences may be immediate, or they may wait until later on to rear their ugly head. 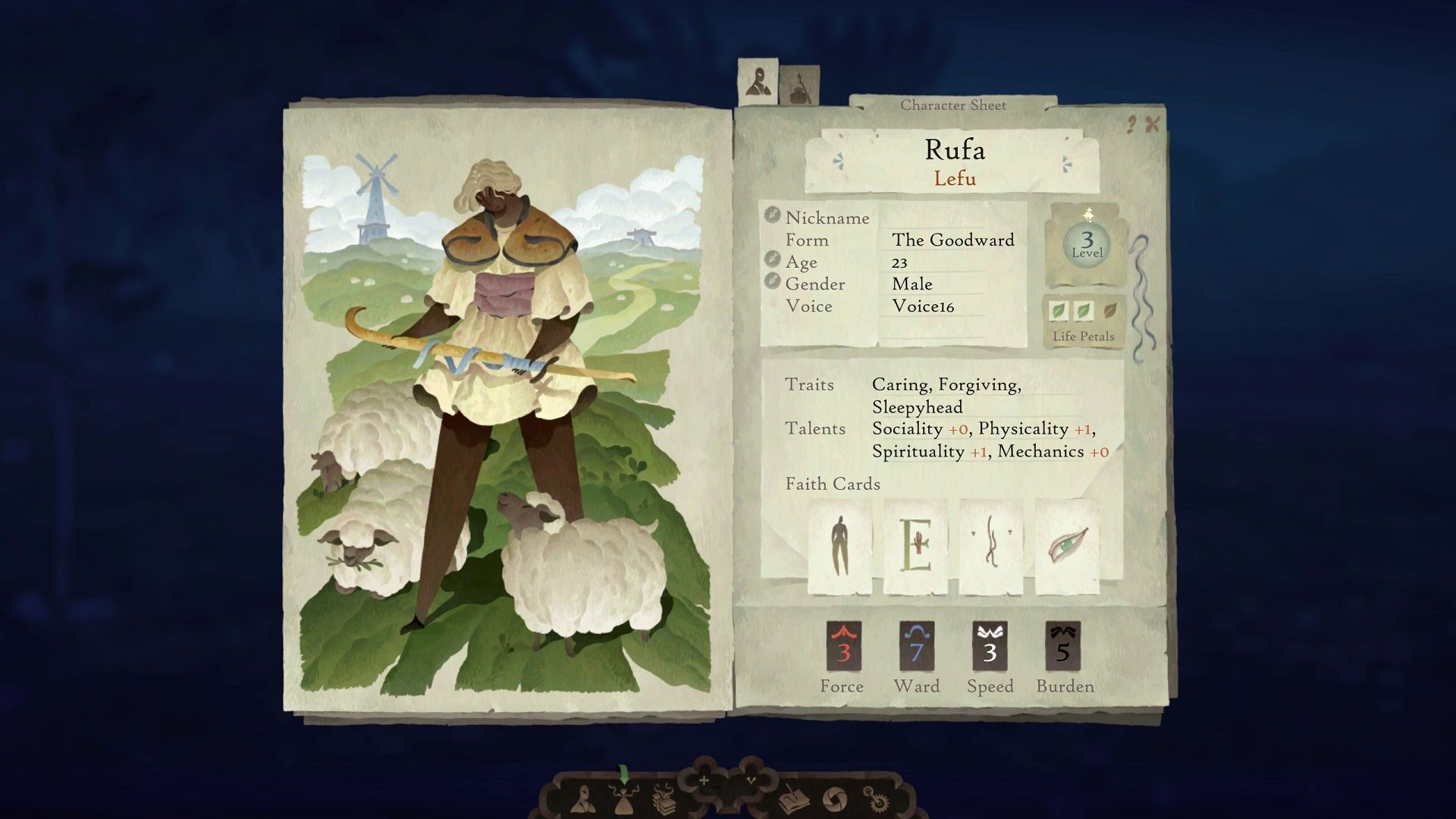 My choices landed me smack dab in the middle of a field. There were some sheep milling about and a human (presumably a shepherd?) standing nearby. There wasn’t any quest log or task list on the side of the screen to guide my first steps in the new world. Instead, I instinctually moved my mouse over one of the sheep, and a name placard popped up. I clicked on the sheep and moved towards it, and an icon of an animal with a heart above it popped up as I approached. Taking that as a friendly gesture, I clicked on the icon and subsequently knelt down to pet the animal.

I then clicked on the Shepherd, and as I approached, an icon of a chat bubble popped up above his head. He told me to follow the road west until I came to a tea house. As I finished the dialog, a bell chimed, and some yellow pluses floated out of the top of the menu bar; I had gained my first knowledge points and was introduced to my character sheet.

Within a few more minutes, I had clicked through every other menu option and started learning the basics of how everything would tie together in Book of Travels. Was the suggestion to head west to the tea house just a shove in the right direction, or was there a reward when I got there? I couldn’t wait to find out. I didn’t need any yellow question marks to find an NPC to talk to or any long tutorial to figure out how to navigate the world or the user interface. Might & Delight expected that I knew how to use a point and click movement system. They accepted that I was smart enough to figure out that when I moved my pointer over an object and it was highlighted, I would move to investigate it.

And that’s what I did. Point click, move, learn. Point, click move, learn. I’m still doing the same thing ten hours later, and I don’t want to stop. I’ve traveled across much of Braided Shore, usually by walking, sometimes by boat or train. Without the luxury of a  monetary system in Braided Shore, I traded away goods I didn’t want for things I needed, and in the process, I learned that not everyone values items at the same price. I’ve been introduced to the magic system of Book of Travels - unwinding knots and drinking teas - and got into a couple of fights. I’ve even come across fellow adventurers and used the emote system (there isn’t any in-game chat) to communicate enough to group up and unlock some nearby strongboxes before going our separate ways.

More than anything else, though, I’ve just wandered around, taking in the sights and sounds of the world around me. Even when I had a purpose in my travels, I found it very difficult to stay on task, as I wanted to see and explore every inch of Braided Shore. During the day, the wonderful watercolor environs feel welcoming. At night, the color is stripped away, and only muddied shapes and outlines fill the screen. Still, even in the darkest of night, I’ll see a dim light in the distance and be compelled to leave the safety of the road to check it out.

The fantastic audio equally matches the beautiful landscapes. From the soft crunch of your footsteps as you meander through a grassy plain to the thunk, thunk, thunk, your heels make as you walk across a wooden bridge sound just right. The details in the changing sounds draw you in, like when the steady sound of light rain falling upon your character switches to the hollow sound of drops hitting the roof of the structure you just entered. That same quality can be found in the ambient world sounds as well. The constant murmur of voices and random laughter of children in towns is replaced by the sporadic chirping of crickets (at night) or birds (during the day) as you travel the open road.

The world immersion doesn’t stop at the general audio and visuals either. Besides being able to minimize every element of the user interface (there isn’t much on screen, to begin with), many of the ‘quality of life’ conveniences found in modern MMOs have been Tiny-fied (trademark pending). As I already mentioned, there aren’t any big yellow question marks pointing out who to talk to, nor is there a quest journal to track the tasks and missions you have agreed to undertake. Instead, Book of Travels requires you to use your memory (or a notepad) to keep track of what needs to be done.

Life in Braided Shore isn’t quite perfect, though. Book of Travels has had multiple delays on its way to Early Access, and even with the extra time afforded, there are a multitude of bugs and glitches. In the ten hours I’ve played Book of Travels, I can’t even try to guess the number of issues I’ve had. Interactive icons not appearing when clicking on NPCs, gaining the benefit of instantly teleporting to any spot I click on, exiting a ferry, and finding myself stuck in the water instead of on the dock, the list goes on and on.

Then there are the optimization issues. I often had times where frame rates would dip down to 30 fps at 3440x1440 screen resolution. I would guess Might & Delight haven’t optimized for the higher resolutions yet, as dropping down to a more standard resolution like 1920x1080 results in frame rates consistently above 100. I suppose I should just be happy that things like ultrawide resolutions have been implemented at all since some recent AAA games don’t fully support them. 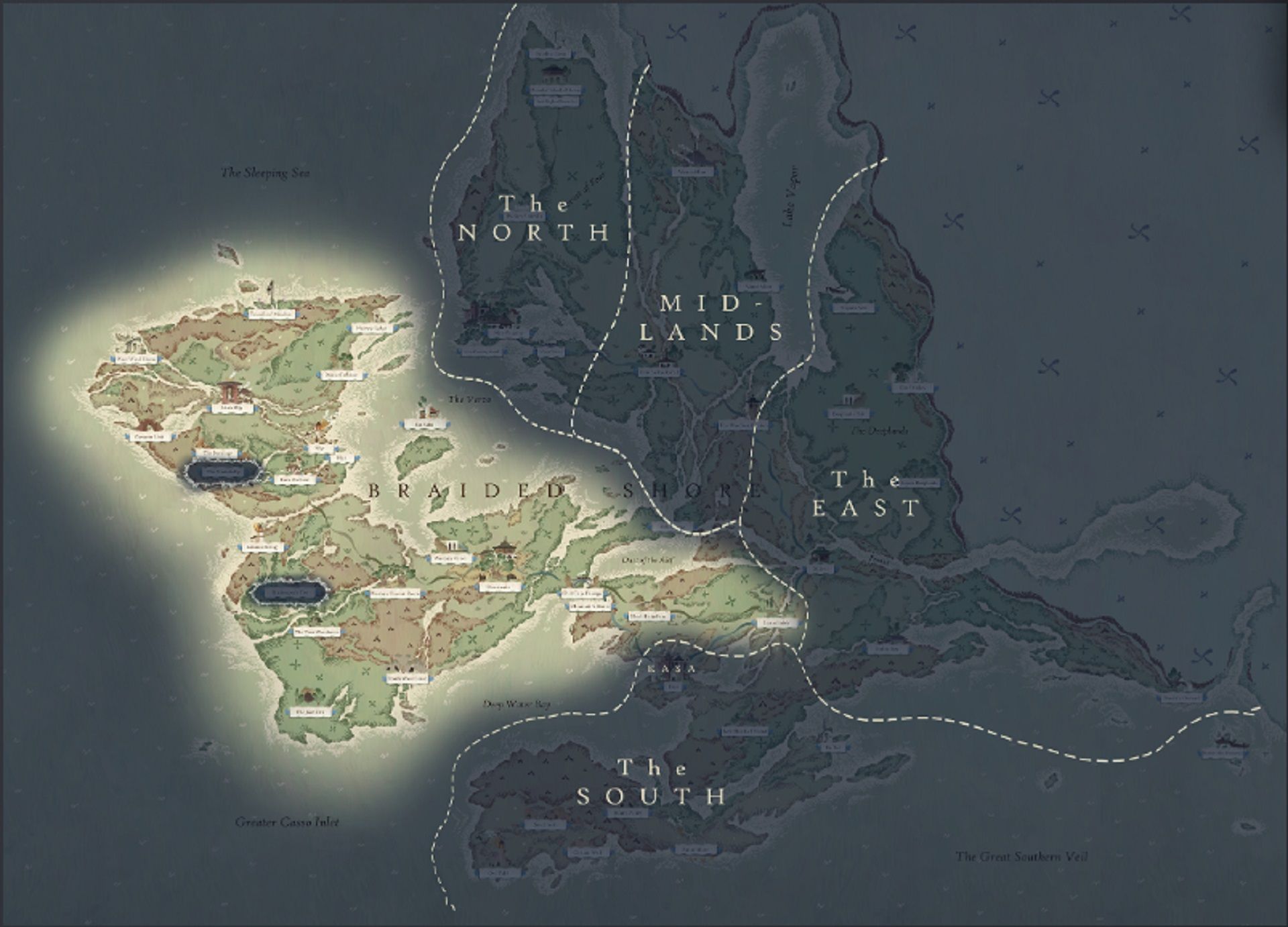 Much of the Book of Travels’ world has yet to be unlocked.

Long story short, Book of Travels is full of potential. With what Might & Delight is calling Chapter Zero in the BoT journey, we’re just starting the Early Access adventure here. For those willing to weather the trials and tribulations (aka bugs, glitches, and crashes) of Early Access, there are already hours of enjoyment to be had with Book of Travels. For those who are more risk-averse, you may want to wait a little while and let M&D iron out some of the issues before you dip your toes into the tinier side of life. Regardless, whether you wait for a bit or decide to jump right in, if you’re looking for something that’s completely different than the typical MMO, yet still finds a way to feel familiar, then you need to keep an eye on this indie gem.