As I fought my way through the gnolls and goblins in an epic battle for the future of one of the early kingdoms you encounter in Bless Unleashed, I found myself engaged fully in the world around me for the first time since starting my review of the Xbox One MMORPG a week ago. However, that was quickly brought crashing down as the quest shifted from me just taking out gnoll enemies to tackling their commanders – each surrounded by at least 7-8 honor guards. As someone who spent 2 hours spamming general chat trying to find a group to help with this quest, I wasn’t looking forward to my prospects in this fight.

I had reason to think that. It took me at least 6 tries to finally get past that point in the quest. And then another three to beat the big boss of that portion of the story.

Bless Unleashed is an MMO that really feels like it hearkens back to the old-school mentality that these types of games should be tackled in a group. And that sentiment I appreciate fully. The problem I’m finding myself running into constantly is the lack of any real grouping features to help facilitate this. As of now there isn’t an LFG channel in the chat, so you’re forced to spam General with your requests. Additionally, when you do find yourself grouped up, there doesn’t seem to be a way to share quests with your team in case they missed the quest giver a town away. 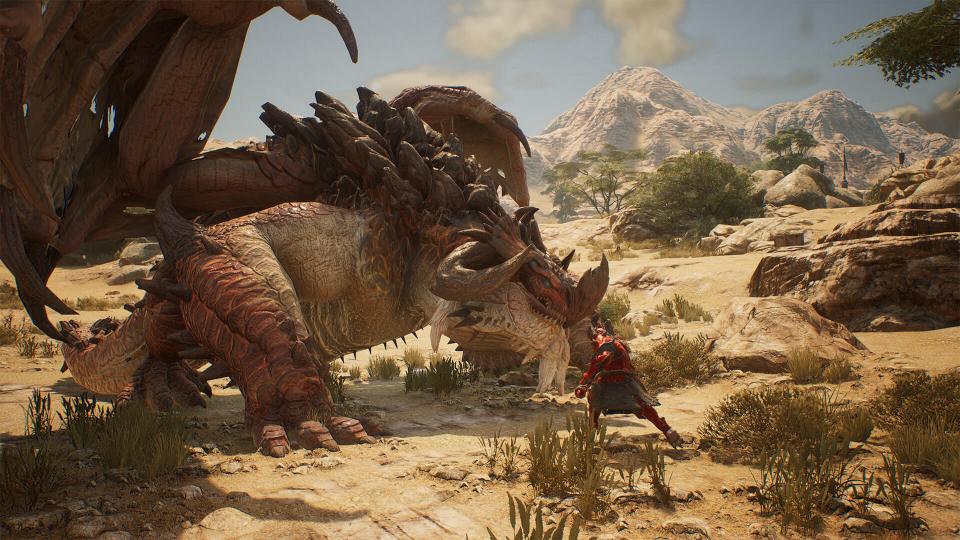 With so much content geared towards making you stop social distancing in Bless, it feels lacking when you can’t easily find a group overall. But when you do get in one and you’re trucking along, Bless can feel like a breeze. So many of the quests are simple gather or slayer quests – you’re either picking up tens of ancient relics just simply strewn about the ground at your feet or hunting some sort of enemy to the betterment of the people around you. There doesn’t seem to be a lot of nuance in the quests themselves - even the story quests follow this same pattern mostly. So, having that buddy to keep you company can break up the monotony at some point.

I took a little while away from my main account (level 15 Ranger on Lumenas if anyone is interested in grouping) to try out a few of the other classes. My friend was going to join me as a Crusader, the melee tank class in Bless Unleashed, so I opted for a Priest, seemingly the healing class. While your Ranger’s skills are powered by the arrows in your quiver, and the Mage I played used Mana which you had to recharge, the Priest has a skill point bar that recharges over time. This change of pace took some getting used to at first, as I was so conditioned to refill my quiver or mana after each major fight. However, for the Priest that skill is an AOE attack powerup I would find myself spamming occasionally as a result.

Once I got over that hurdle, though, I did find some of the skills the Priest used incredibly satisfying. There is something for summoning corporeal blades from the ground at your enemy’s feet to do your dirty work for you – it packed a punch many of the skills I had used to that point didn’t. The major issue I’m finding with the Priest early on is a total lack of healing skills at the outset.

That’s not to say also that attacks in Bless Unleashed feel lacking either. While I’m still dealing with some considerable lag when trying to do even basic combos – sometimes the attacks won’t even register though other skills will activate when I hit the corresponding key – I’m starting to get used to the lag at this point and anticipating it when it happens. Currently, Neowiz and I are troubleshooting trying to figure out the cause, but suffice to say it has marred the combat as a result. However – it is still satisfying to complete a long string combo. And the skills at the end of the combo pack a punch, and you know it instantly thanks to the incredible soundscape Bless Unleashed has. The echo from Penetrating Shot – one of the finishers in the Ranger combo – sounds so awesome every time I hear my Elf release that bowstring. Sometimes I’ll perform the combo just to hear the echo bounce around my speakers, it’s that good.

You can apply a damage bubble to the players around you (at the expense of adding one to yourself), but that skill takes a while to channel and recharge. While playing in a group I found it hard to keep my tank alive as I had no actual way of healing them.

Blessings be upon thee...

This is down to how Bless Unleashed handles its skill system. Blessings are groups of skills you’ll unlock as you progress the story – essentially, you’re pulling from the memory of those warriors who came before you and drawing from that experience. With each Blessing comes at least three skills (sometimes more in the latter stages of the game) that are mapped to your face buttons when you hold down LB. These skills range from utility – such as the aforementioned damage barrier from the Priest, to straight up damage mixed with crowd control, such as the Eruption Shot with the Ranger that deals damage and, later on, will knock the enemies to the ground for a second or two.

I do like the skills being limited – on console especially massive skill bars don’t work as well as a more streamlined skill system (I honestly can’t wrap my mind around how Final Fantasy XIV does it on controller, but that might be the only good example of a heavy skill-bar game working). But I don’t like how constrained it feels in terms of customization.

You can only use the skills that your active Blessing offers at that moment. Not every skill is unique to a Blessing as well – you’ll see skills repeated throughout each tier, such as the aforementioned Eruption Shot. However, you can’t mix and match based on the unlocked skills you have, and I take some issue with that. If the idea is that we’re learning from the memories of that Blessing – once obtained do we just forget the skills when it’s not active?

Additionally, you can’t easily swap Blessings either, which is frustrating to no end. Instead you can only swap Blessings at special Altars you find in each zone – meaning if you want to change up your playstyle you need to trek across a map to make the change. I get the story element of it – the Blessings are bestowed by the Gods at the center of Bless Unleashed’s story, but some quality of life features would be nice here.

Bless Unleashed also has an issue with how it handles player trade. Currently there are seemingly 6-7 different currencies you’ll use throughout your adventures – some are used for enhancing weapons and armor, while others are simply gold to use with traders. One resource, Star Seeds, is important as you’ll use it for myriad of things, such as reviving if you fall in battle or, more importantly, as the resource you use in the player marketplace.

Currently there is no way to trade with players outside of this marketplace, by the way. You can’t initiate trade with a player like you can in virtually every other modern MMORPG, the only way to trade is through this marketplace. Star Seeds are used as the currency, which makes Gold actually feel kind of useless in Bless Unleashed – yet it’s the primary currency you get as quest rewards. I’ve got almost 700K in gold, yet I don’t feel like I have anything to really spend it on. You can exchange gold for Star Seeds at special vendors, but that’s capped each day.

This is maddening as there doesn’t seem to be any real fast way to earn Star Seeds in game. Right now as Bless Unleashed celebrates its launch you’ll get some in the mail, but I’ve yet to see them as a quest reward or dropped from enemies or bosses. You can also list items on the marketplace yourself as well (for a nominal fee of Star Seeds) to earn some, but other than that there doesn’t seem to be a quick way to grind this incredibly important currency.

And as the only currency you can use to interact with Unleashed’s economy, this feels incredibly short sighted. Additionally, by not having simple trading features within the game itself, it makes Bless feel unfinished to a degree – while older games might not have had these features, modern MMOs have these as standard, and these quality of life improvements cannot be overstated how much they can take away from an experience if they are simply missing. 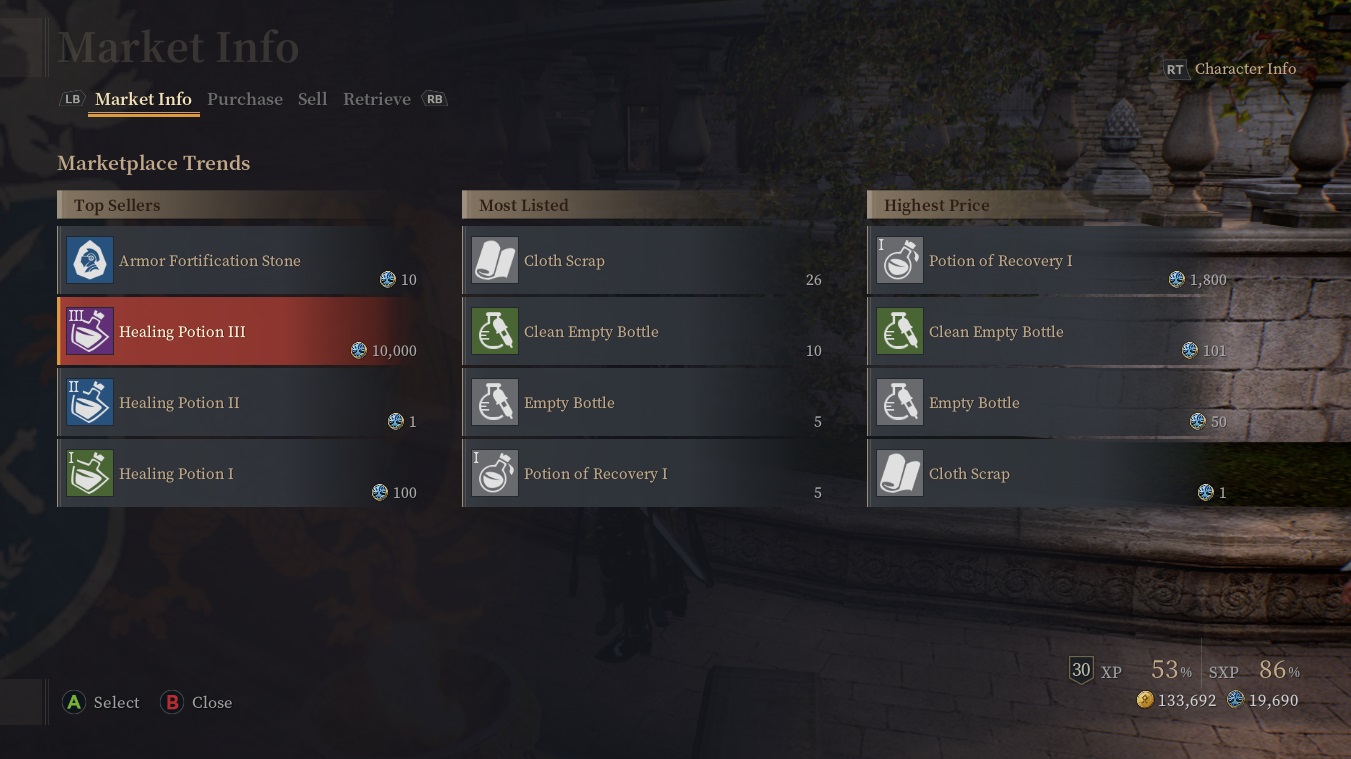 After taking some time away from my Ranger, I’m moving back to her as my main for now. I’ve made it to a lush jungle on an Isle important to the story, and I’m trucking along, helping House Sorza get to the bottom of the threat the world is facing thanks to the Faceless cult. It’s getting interesting, and I’m enjoying watching the different biomes – from the coastal feel of Carzacor to the sand-swept dunes of Navarra – fade and blend into one another.

The world of Bless Unleashed looks and feels really interesting and for the most part it reminds me of a world that is lived in. While some of the larger cities do feel empty, this isn’t unique to Bless Unleashed as players move from hub to hub. I really liked the crumbling ruins of the Lost City in the Gnoll Wastes and it was the first time the story made me interested to know what happened there.

As much as I’m having issues with Bless Unleashed, there is something there that is intriguing me. We’ll have more as we move through our review of the MMORPG, as there is so much I haven’t yet touched on, such as Unions, Bless’ take on matchmaking and dungeons, and more.