It’s been a week since NeoWiz and Round8 Studio launched the controversial free-to-play MMO Bless Unleashed on PC. Originally a console release on Xbox and then PlayStation, Bless Unleashed PC targeted the Steam PC distribution platform as its first PC based launch. We’ve had a whole week to play hands-on with this PC version of the “Bless IP” and contrary to the many apparently mixed reviews I, personally, have been having fun. Indulge me if you will as I go over what I’ve seen within the first 40 hours of playtime.

When I volunteered to spearhead coverage of Bless Unleashed PC, I knew I was treading into waters that was full of many sharks in the gaming community. There are a lot of angry gamers in the community that tried “Bless” in one of its other incarnations who walked away feeling cheated and disgruntled. It’s not for me to say if those are accurate grievances or not as I have little firsthand experience with such claims. But because of all this negative feedback, of Bless Online, many gamers, perhaps several who’ve never tried a “Bless” game, won’t begin to give Bless Unleashed PC a fair chance. And for many gamers that will be a missed opportunity.

In my personal experience I tried Bless Online which started on PC back in 2018. The guild I was in was hyped up for it. I fell flat on the game weeks in and left. I was disappointed that capturing pets, which drew me to the game in the first place, cost a lot to capture your second pet as well as level them up. Then in early 2020 a slightly different version of “Bless” was released on consoles, first exclusively on Xbox in March of 2020. I gave this variant of the game a try and played several weeks before falling out of it as well. Mainly because no one I knew played and I had so many other MMO choices and objectives to fulfill in those MMOs. Nevertheless, I enjoyed my time in Bless Unleashed for Xbox for the most part.

The Here and Now

Flash forward to August of 2021 and I find myself volunteering to play and review Bless Unleashed for the PC. The game has only been out for a week, and I’ve spent 40 hours playing it to date. While the early stages are pretty much a repeat of what I saw in the Xbox version I’m no less having just as much fun. A friend, and guildmate of mine in our quite large, multi-game guild (who are not supporting this game) is also playing Bless Unleashed PC. He summarized it perfectly on how we both are feeling, “I almost feel dirty playing this game because of all the negative feedback about it. But I'm actually having [fun] regardless of all the negatives about the game”.

I think it all comes down to individual taste and concept of “fun” and I’m sure a lot of the naysayers will disagree with my analysis. While I think for the most part Bless Unleashed PC has had a strong opening week (no login queues, no desktop crashes, etc.) it will probably be considered by many as a good backup MMO to play. It’s one that can fill the void when we tire of our main games, or when we can’t play them for some reason or another. It’s not that Bless Unleashed PC has been terrible it’s just that it’s pretty much standard fare for an Asian MMO brought to Western shores.

What To Expect in The Early Stages?

When you first start up Bless Unleashed PC, you’ll be able to choose from five standard fare Fantasy classes: Berserker, Guardian, Mage, Ranger, and Priest. These are locked behind specific race choices without gender lock. The game has a decent character creation tool but not quite on par with say a Black Desert Online. Typically, I play Tank classes in MMOs but for some reason this is now the second time I’ve been drawn to Bless Unleashed’s Mage class and that’s where I initially landed. 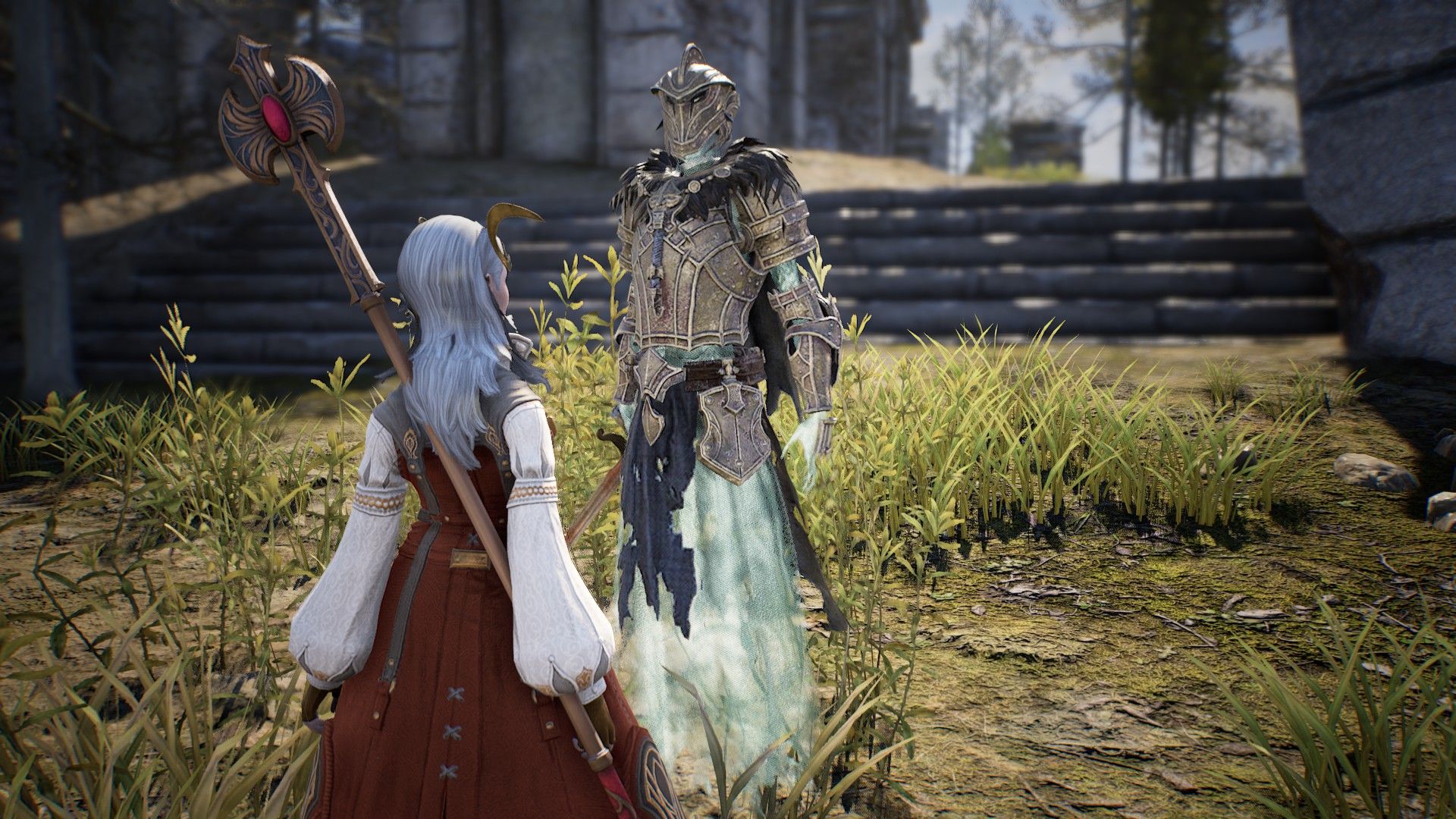 Graphically speaking the game is very pleasing at times

Bless Unleashed PC is an action combat MMO, meaning you need to point your reticule (mouse cursor) at whatever you want to beat up on. Pressing on the scroll button on your mouse “locks on” to the target but that seems to be a bit glitchy. Glitchy to the point of not being a deterrent, more to the point of being an annoyance. It seems to occasionally lose lock while you’re kiting or dodging. Thankfully, the developers are making updates to this mechanic in their next major update called “Awakened”. Nevertheless, this never impacted the fun factor for me mostly because graphically speaking spells and actions are a beauty to behold while you’re dancing and dodging. Some have said that the combat is slow, but I don’t see that. I don’t think it’s as fluid as Black Desert Online but once again it didn’t impact the fun.

The game also flawlessly transitioned from keyboard/mouse to an Xbox Controller I plugged in. I went from one to the other while the game was running and saw no issue. In the end I chose the mouse/keyboard form of input. The only change was I remapped the jump key to the ALT key for me since the Space bar is used for dodging. One change I would love to see is support of double key tap for dodging, a ’la Guild Wars 2.

The underlying design behind the action combat also lies a combo system. Stringing together combos for the most part is straight forward as the UI gives you a hint on screen in the middle of the battlefield where your eyes will be. Combine this will skill level upgrades and “Blessings” which you can earn and switch in and out with other “Blessings” for different passives, etc. makes for a fun system overall.

Bless Unleashed PC’s story is standard fair stuff. It’s a tale of ancient betrayal and one which “earthshaking disaster has led to thousands of years of enmity between the mortal and the divine. Now, the mad mistress of the dark, great, and terrible Lumenas, has returned to destroy the race of man and sink the earth into endless night”! Oh my! For the most part you’re not going to be emotionally attached to any character like you would in a Final Fantasy game. You’ll most likely skip through the dialogue fast enough to get to your rewards and hasten to the next open world fight. 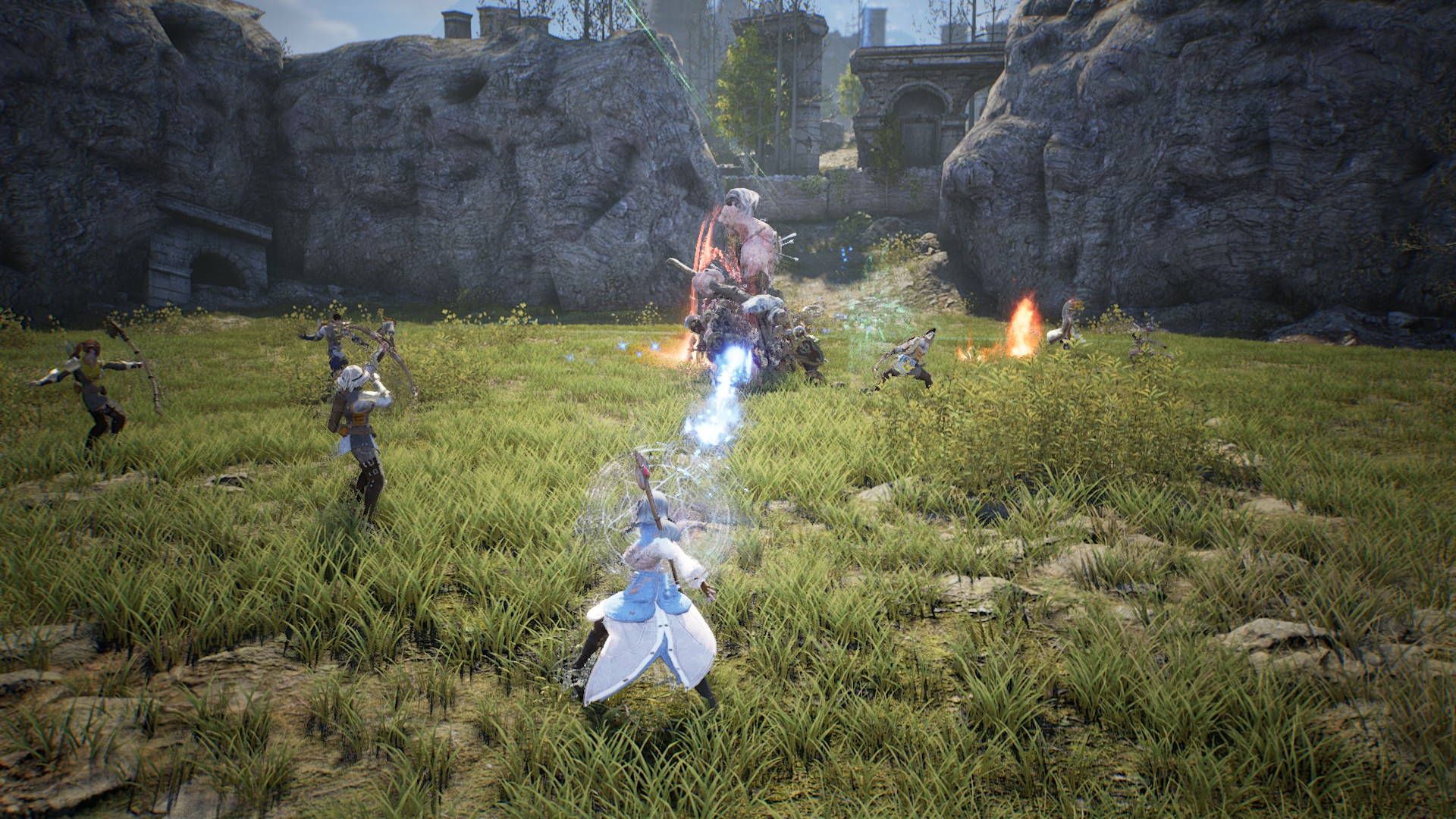 While it’s nothing new in MMOs, so far, the most fun for me has personally been in the regional quests and open world boss fights. Of course, this is all fun and games if there are other players in-game to join in, so far that’s not been an issue. While there is only one North American server the server has many channels. Jumping to a different channel is as easy as entering the Z key. Assuming you can read the global chat channel you can always answer a cry for help in a different channel.

Open world PvE battles works well with other players as anyone who tags a mob seems to get credit. Also, if you happen to expire, i.e., “die” in battle, anyone can resurrect you on the spot.

Speaking of global chat, the chat display in Bless Unleashed PC is horribly awkward to use. And it doesn’t matter how many times we build a free-to-play MMO but more times than not the global chat suffers from a deluge of RMT spammers. Supposedly some chat display changes are coming in the previously mentioned Awakened update. Let’s hope spammers is addressed because global chat in its current state is useless.

As you venture through the game’s story campaign (five acts, I’m only 33% through Act I after 40 hours) you’ll take part in “Trials”. These are two-man PvE boss arena fights, these are fun as well and yield chests of rewards, upgrade tokens and marks. 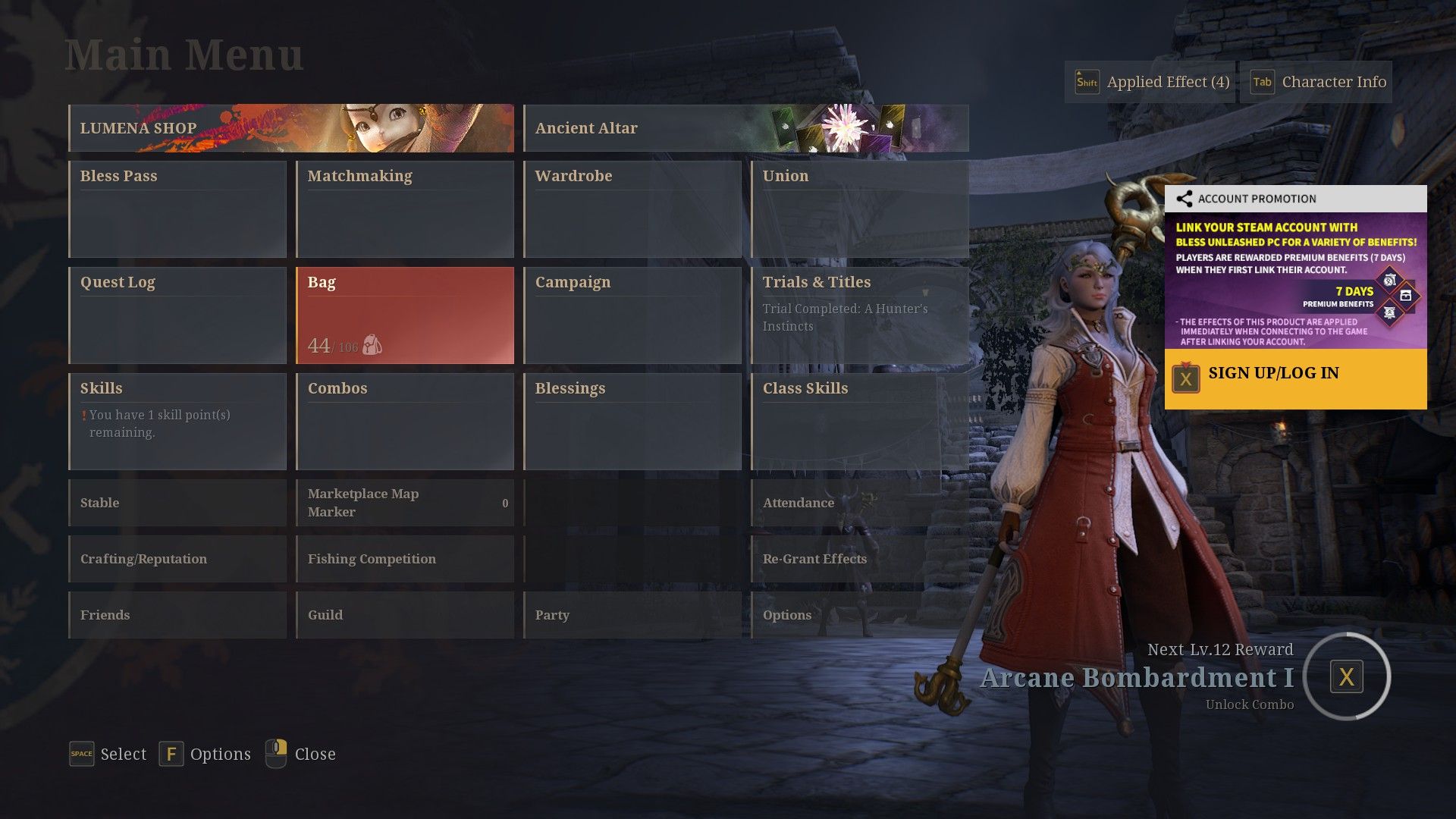 Main menu shows you a lot of areas, nothing revolutionary but nevertheless robust.

So far, the game has thrown a considerable number of “freebies” our way. It is a free-to-play game with a “Bless Pass” season pass and a real-money upgrade to the pass for a Premium Pass track. Bless Unleashed PC hands out daily attendance login rewards as well as rewards for playing a certain number of hours. The development team has also been great at handing out compensation rewards for maintenance windows.

“Exploration”, while not entirely secret in implementation, is rewarded. Small chest icons show up on your mini map. Opening these chests rewards, earns you a bag piece. After collecting so many of these bag pieces you can trade them in at the associated NPC and you earn inventory bag slots at no cost. 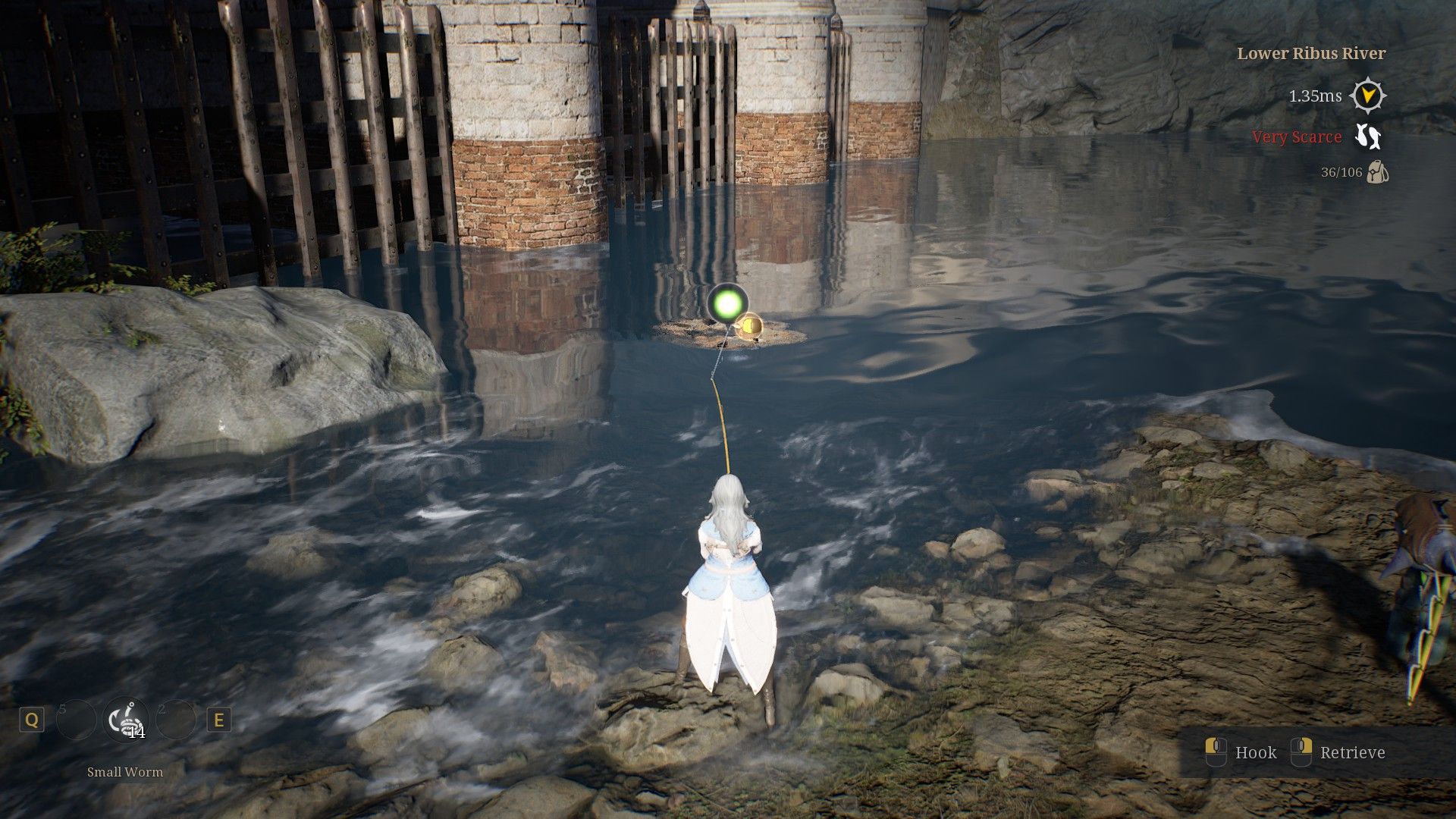 Crafting is straight forward so far along with equipment fortification (level upgrades). It seems like as you level you open additional recipes. Resource gathering is abundant and easy to accomplish so far throughout the areas. Equipment fortification is done using upgrade tokens which can basically be earned by salvaging equipment.

Bless Unleashed PC has the obligatory fishing component but it’s quite different from other games and not as forgiving. You control the power of the cast and then must wait for a hook to see some real “action” when the reticule goes full green. One mouse click is performed to “hook the fish” followed by a series of mouse clicks to reel in your prize in. So far, more times than not, I’ve lost the fish, so this is an area that requires further practice. Especially since there is a fishing competition and fishing feeds into fulfilling your “Bless Pass”.

Even though I’ve put in 40 hours alongside a server wide +50% PvE experience gain buff I’m still only level 16 of a maximum 45. It kind of signals that there is a bit of a grind here. Even so it really hasn’t felt that way because I’ve never had a lack of new things to do. Even gathering contributes to your leveling XP. I’ve also only satisfied five of the possible (known) forty-three Steam achievements.

As far as “pay-to-win” (P2W) accusations there is indeed an Attack Speed buff you can buy on the game’s real money transaction shop. Additionally, there is a “peace declaration buff” available at level 25+ that indicates that open world PvP might be forced at the higher levels.

As I look forward to the next few weeks, I hope to get better at fishing, see what the Estates (housing?) component looks like as well as open Unions (factions) up. Hopefully I can also experience the open world forced PvP claim as well as get hands-on time with animal capturing (mounts).