The just-released Unreal Engine 4 Update for Blade & Soul came packed with a bunch of new features. There’s a new class, the Dual Blade, for players to master. There’s also the Forest of Echoes, a new 4-player dungeon to explore. The patch notes also mention a new story extension, additional character slots, and new gear to loot. But there’s no doubt that the most anticipated update was the namesake of the patch itself - the move to the Unreal Engine 4.

The Unreal Engine 3 dates all the way back to 2006, a time when the Xbox 360 and PS3 ruled the console world, and a PC with a dual-core CPU, 2GB RAM, and a 512MB video card was considered high-end. Even with the numerous updates UE3 has received over the years, UE4 is a far superior platform that’s able to utilize all of the powerful hardware packed inside of a modern PC. Switching from UE3 to UE4 isn’t as simple as finding a weapon upgrade or learning a new spell, so the Blade & Soul upgrade may not be all that you were expecting, at least not yet. So we put together five things that are better after the Unreal Engine 4 update and, just as important, five things that didn’t get any update love.

Just for reference, here are my system specs that are relevant to the update:

No matter where you look, it’s crazy how much more detail the textures have after the update. Sure, the blurry ground isn’t quite as blurry as before, but the fidelity goes well beyond that. Roads and paths have a much more natural look, as do the sides of cliffs and hills. Rocks, both natural and cut stone, all have a detail that makes them jump to life. And one of my favorite improvements is the detail of the moss growing on the side of boulders and cliffs. 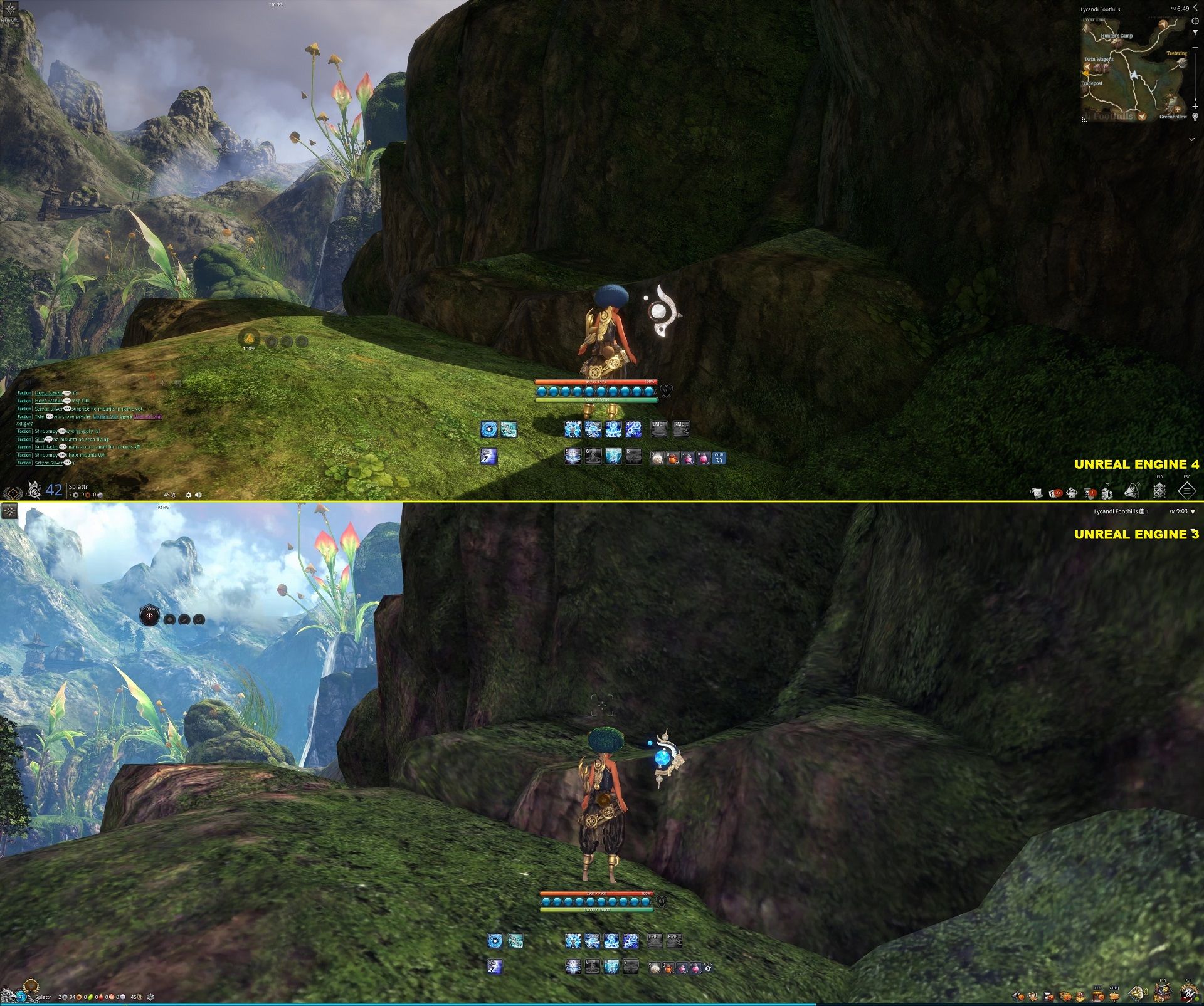 There’s no question that textures near and far look much better than before. There is a lot more ground cover, and the environmental effects like water and smoke are also much more refined. Unfortunately, with more to draw on the screen, pop-in has become a major distraction.

It doesn't happen everywhere. Dungeons and other small areas are gorgeous, and the limited sight distance allows the engine to render everything all at once. The visual upgrades to far-off mountains and other backdrops also look much better than before and are immune to the pop-in effect since you never get close enough to trigger the level of detail changes.

Where the pop-in becomes unbearable is when you are running through an area with a lot of ground cover or objects scattered about. I can see tall grass render in just a short distance from my character. Trees, pots, and even buildings appear out of nowhere as I crest a hill. It’s as though the game engine is caught off-guard by my presence and suddenly starts loading assets into the scene later than it should.

I have to be honest. I’d rather have a world with fewer objects rendered at a greater distance than a bunch of objects that pop in and out of existence near my character. Finding the right balance with the level of detail is essential, and NCSoft has really missed the mark.

My oh my, does the volumetric fog and smoke look so much better with Unreal Engine 4. Smoke and fog no longer block whatever is behind them from view, adding new depth and immersion to the area you are in. The same goes for the water. Whether watching a waterfall cascade from above or looking at a stream or pool of water, it all looks fantastic. 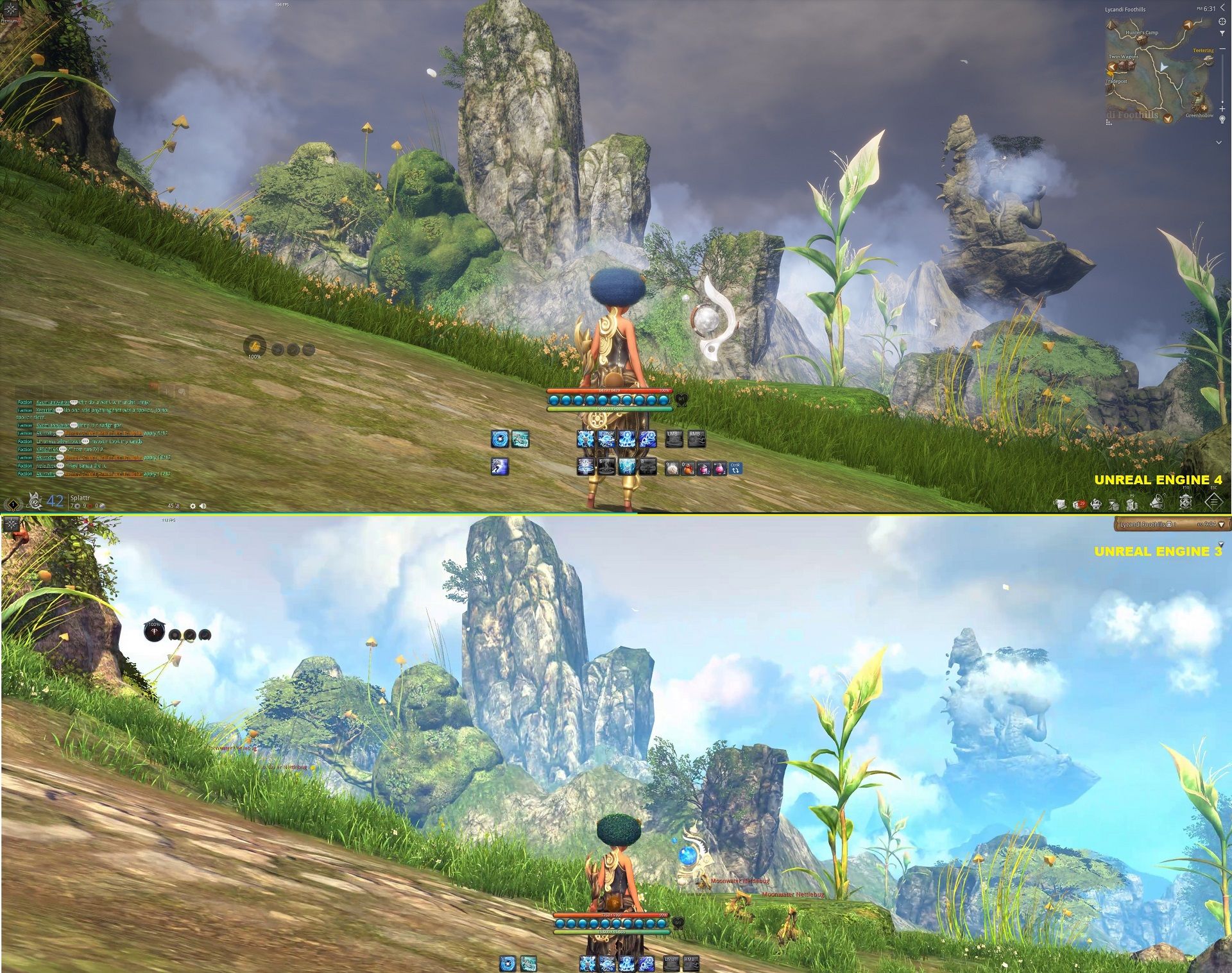 All of the updated pretties come at a cost, and it’s a price that many won’t be willing to pay. While the multi-core support that comes with UE4 has helped reduce stutter and lag, the enhanced visuals have reduced overall frame rates. In UE3, my maximum frame rates were about 30fps higher than they are with UE4. With an Nvidia RTX 3080 that still delivers well above 60 fps in most areas (Mushin’s Hall is horrible, but the Tower seems ok), that’s not really an issue, but more moderate rigs may struggle to maintain decent frame rates. For many MMOs, a lower frame rate isn’t a major concern, but in the action combat of BnS, reduced frame-rate leads to reduced control of your character.

For as long as MMOs have existed, there’s always been the challenge to create the perfect User Interface. If too much of the on-screen real estate is used, it can hamper immersion; too little and players won’t get the information they need. With the UE4 update, my first thought about the in-game UI was that it didn’t look any different. Upon further inspection, though, there are some subtle changes. For me, the black and white menu bar is much easier to decipher, and at the same time, less distracting than the old icons.

The update to the battle UI is also a welcomed change. Splitting all the different things like buffs and cooldown timers into multiple rows makes it a whole lot easier for a scrub like me to follow what is going on in battle. 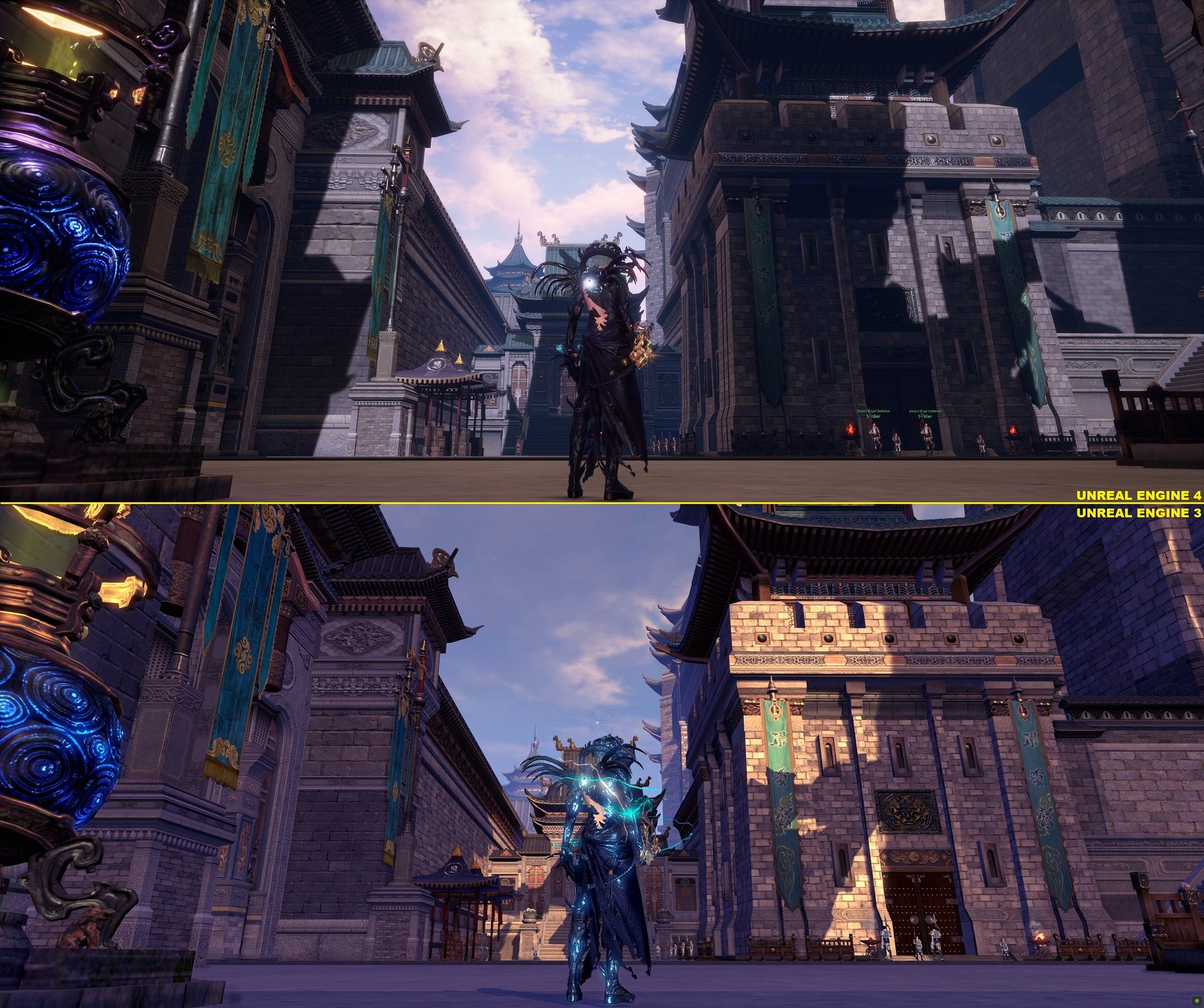 I have to admit that I am unimpressed with the character models in the update. I genuinely don’t see much of a difference, if any. I expected more fluidity in the way my character’s outfit flowed, but it was the same animations I saw before. I expected to see parts of my clothing flowing in the breeze and my hair rustling in the wind. Instead, I have the same static look that only reacts to my movements and nothing else.

Loading screens are the worst, so it is with great excitement that I can say the UE4 update has made a massive difference. With UE3, it took about 40 seconds from clicking Start and my character loading in. After the UE4 update, that time is down to an average of 13 seconds.

Saving 27 seconds doesn't sound like a huge deal, and on its own, it isn't. Add that to the reduced time of actually loading into the initial character select screen, and there is a noticeable difference. Load times, measured as the time between clicking Start on the NCSoft launcher until the NCSoft logo appears, dropped from 68 seconds to 42 seconds. At that point, we're looking at a total reduction of 53 seconds.

Saving nearly a minute loading up BnS is nice, but I will admit that start-up time is a first-world problem. What's a minute or two matter compared to a multi-hour play session, right? Fortunately, load time when Windstriding is also affected. Any time spent staring at a load screen progress bar is an immersion breaker, and the 24 seconds between beginning your Windstride and landing at your new location with UE3 felt like an eternity. With the UE4 update, Windstriding still isn't instantaneous, but the load time is reduced to just under 14 seconds. That is a very noticeable improvement given the number of times you will Windstride during a play session. 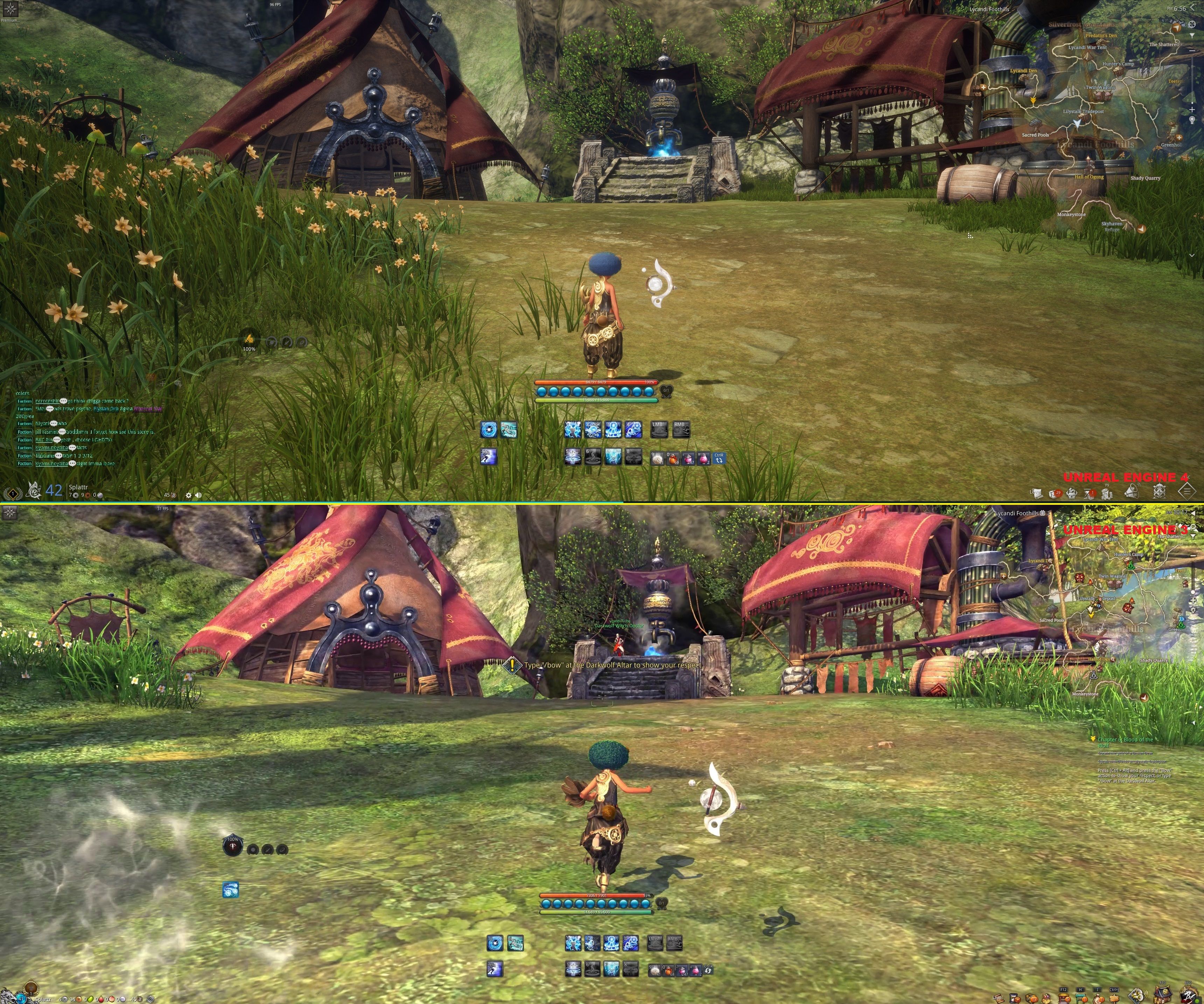 There are times when you can tell the lighting improved with the UE4 upgrade. Other times, though, everything seems a little muddled. Individual light sources look very nice, but overall it doesn’t seem any better than before. At times, shadows were too dark; at others, they didn’t seem to exist at all. This is obviously an area that is still a work in progress, and over time I would suspect the lighting will become more uniform throughout the entire world.

Better: Everything Not UE4 Related

As I mentioned earlier, there’s a lot to this update that isn’t related to the change to the newer Unreal Engine 4. Although I haven’t had a chance to see it in action, the new Breaker Gauge looks like a neat addition to boss fights. And the little quality of life things like the change to the cost of opening up bag slots and additional character slots (for those that need that many) are a nice touch.

I’m not sure why I was hoping for better sound quality after the update; I just was. To my chagrin, it’s the same as it was before. Instead of the other extras like a new class and zone, I would have rather seen the team spent some time going through the audio and seeing how UE4 could provide better sound. Or maybe they should have trashed the whole UE4 update and spent the money on redoing the voiceovers throughout the current game?

The Unreal Engine 4 update is really a mixed bag. The load times are much better, and regardless of your computer specs, you should see an improvement. You should also see a huge improvement in the stuttering and lag that everyone experienced with the UE3 platform. While that smooth gameplay is nice, players on less beefy systems may have just traded the stuttering for a consistently lower frame rate. That means any graphics upgrade brought about by the UE4 upgrade could be lost when you have to lower the overall quality settings to push the frame rate back to an acceptable level.

It’s possible that as Blade & Soul matures on the UE4 platform that some of the wrinkles will get ironed out. There’s always room for optimization, and future design choices could minimize issues like the excessive pop-in found in some areas. I would also expect performance gains as the dev team further hones their skills with the UE4 platform. Blade & Soul has always looked good, even under the aging UE3 engine, and it will be interesting to see just how far the team can push the UE4 envelope.

So what do you think about the UE4 upgrade? Was it worth the wait? Or is it too little, too late?