If you bothered to read the title, then you already know how I feel about Black Desert Online’s newest update Abyss One: The Magnus. Initially scheduled to release on October 12, 2022, Abyss One was delayed a week until October 19 to fix bugs and get the content in a more playable state. Unfortunately, that doesn’t seem like it was enough time considering multiple areas of Abyss One still have game-breaking bugs and minor visual and sound glitches.

However, even if Abyss One: The Magnus had released in a perfect state, the content still wouldn’t be any fun to play.  The story for Abyss One has players fall into well and are transported into a new dimension that is fractured, and it’s up to the player to correct errors in the rifts.

In order to fix these rifts, it’s necessary to play some of the world’s worst mini-games ever created. Imagine picking the least fun Mario Party mini-games, making them single-player and glitchy, and having imprecise movement that occasionally requires brain dead levels of combat. The content is just not enjoyable in any respect.

All of the Abyss One quests transport the player to a small instance where they have to complete a puzzle or challenge. Most of these require moving orbs around, dodging telegraphed attacks, memory games, and some are just luck based. Others don’t even require any thinking or skill.

For example, the first quest just has you following light around in a rowboat. That’s literally it. Another has you follow a light to gather items for Lara so she can build a raft. Others include remembering which monsters appear in random orders and there’s even *shudder* a turret mission.

Outside of the glitches, there’s nothing inherently wrong with any of the missions, but they just don’t mesh well with the Black Desert engine or its fundamental game design. Black Desert thrives on its combat and exploration, and it’s supplemented by an in-depth life skill and market system. There are a few other things it’s good at, but precision jumping mechanics and puzzle solving isn’t one of them. That’s not to say that there aren’t already a few puzzle in the game, but most players don’t really like them.

The other aspect that makes the mission not fun is that they’re either RNG based or ridiculously easy. One has you smash pots until a glowing light appears. Where is the fun supposed to be, besides channeling my inner Link? Another had me standing in the middle of a shrinking magnetic barrier; it was basically every Battle Royale game without any other players to kill you. There’s simply not a single mission that I want to ever do again.

Then, of course, there are all the bugs. I seem to have gotten lucky and only had a handful of them. The first was a mission with Jordine where he got stuck in the wall. Apparently, you can complete the mission without him, but the door that was supposed to open at the end of the mission opened and then still couldn’t be passed due to an invisible wall. I had to restart that mission four times for it to work sort of correctly. In another mission, I got stuck outside of the mission area by another invisible wall.

The worst, however, was during the final mission. If you die, you can either go back to The Magnus or wait 60 seconds to retry. I decided to go back and was greeted with a black screen. I restarted the game and got the same black screen. In order to fix the problem, I had to forfeit the quest, teleport back to the mission zone, and re-accept the quest. 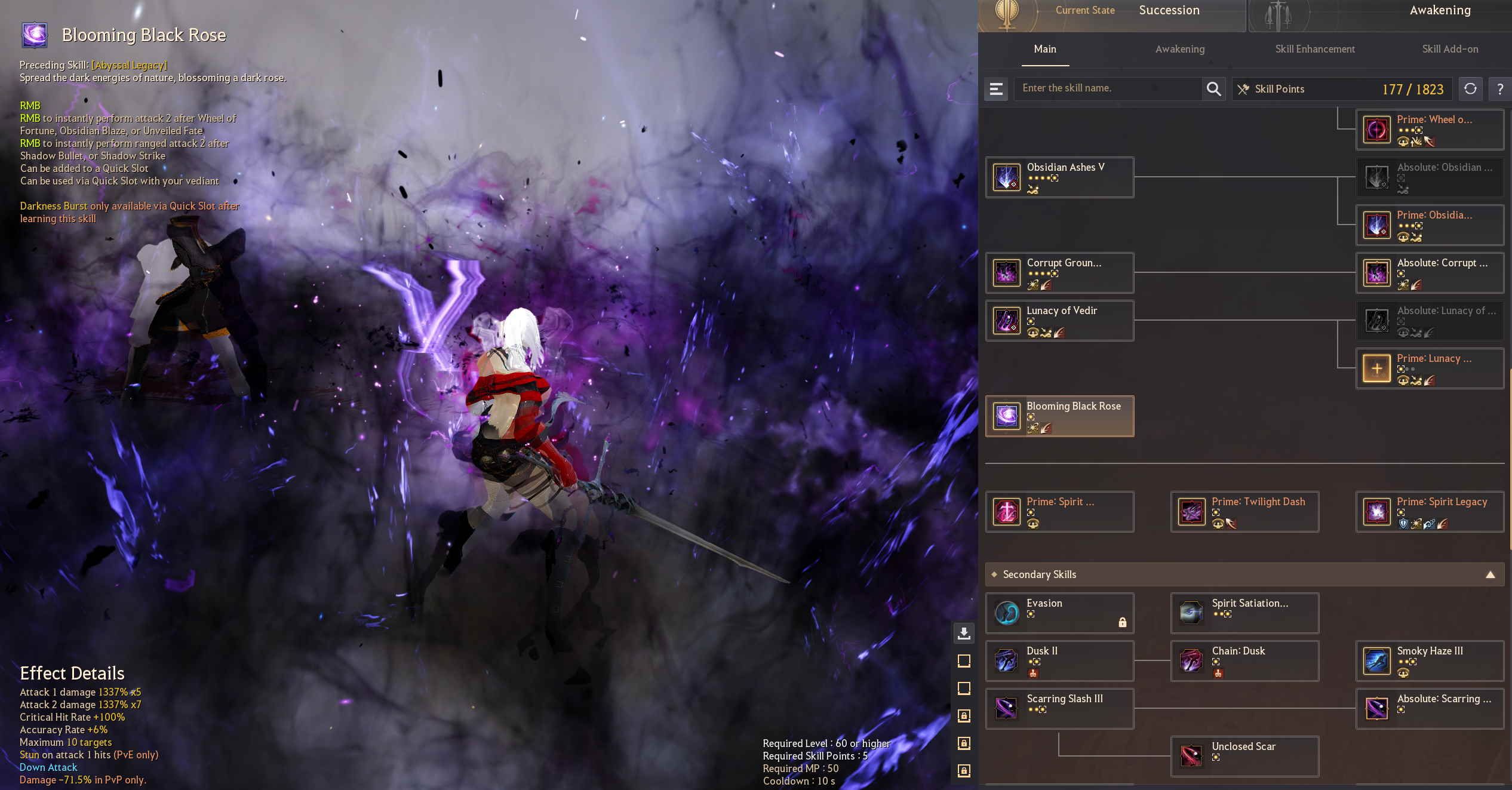 Outside of fixing the rifts, there are occasional cutscenes that are alright at best. Wuju has a couple of entertaining lines, but Jordine is even more cringey than before. There’s also not really anything of value added to the game’s lore. They tried to make an excuse for the Shadow Arena existing…and then not existing anymore, but I doubt there’s more than a handful of people who actually care.

So…after all of this complaining, I still have to recommend finishing Abyss One. Even though it’s not any fun and the lore is just okay, the rewards are way too good to pass up. As you complete missions, you’ll gain access to fast travel points throughout the world and minor rewards such as experience scrolls, cron stones, and even a 15-day Value Pack.

However, the biggest reward is the shared storage that can be accessed anywhere in the world. Inventory space is currently one of the biggest bottlenecks in Black Desert. Many players have spent tons of real and in-game currency to increase their characters’ inventory slots and city bank spaces.

Being able to link all of the major city banks together massively increases your available storage and allows you to transfer items and material instantly. This makes retrieving worker node materials significantly easier and/or cheaper; no longer do you have to run to another city or pay to have the goods transported. 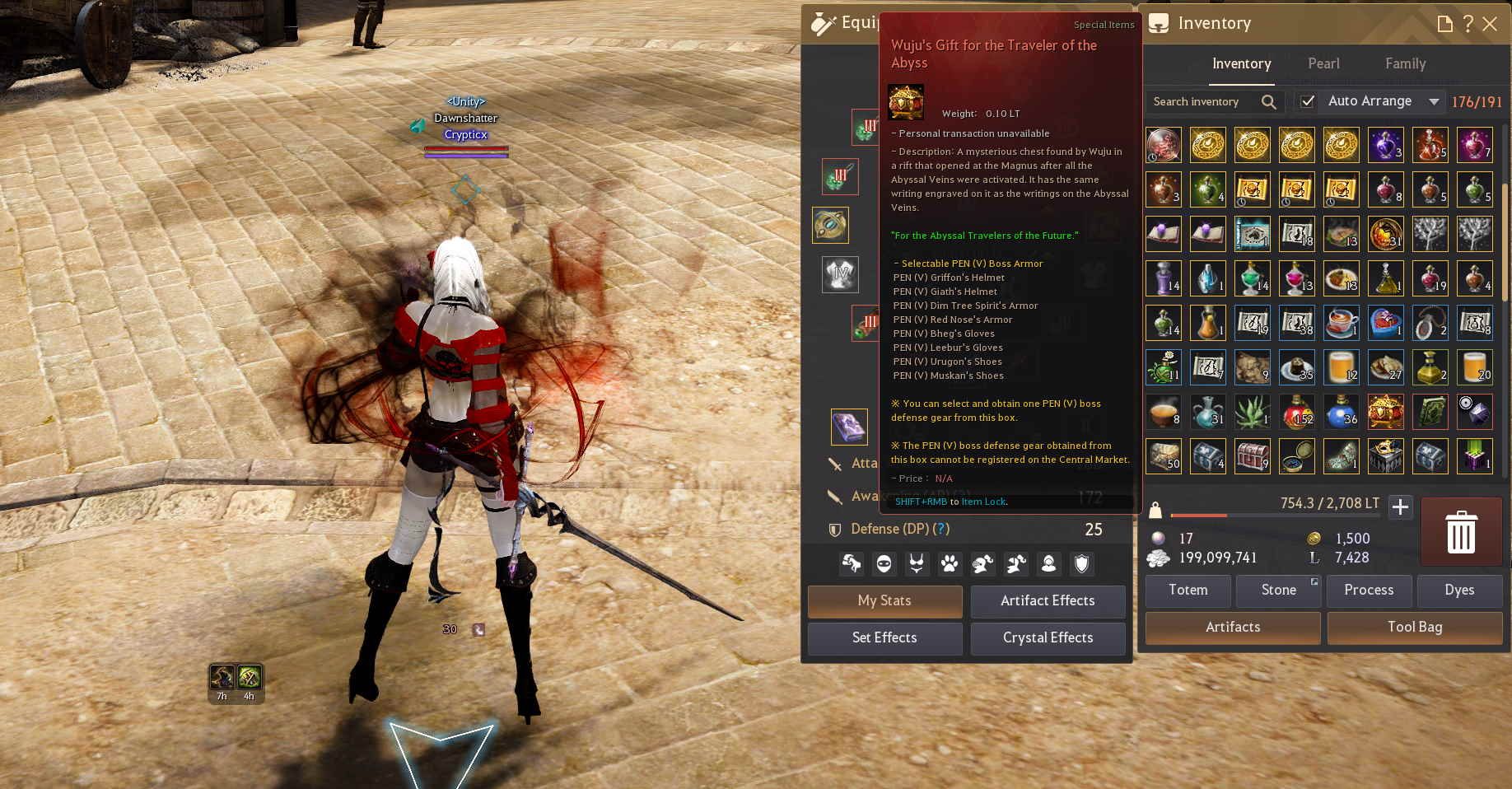 Additionally, completing the questline grants a piece of PEN Boss armor of your choice. This gear can’t be sold on the marketplace, but it can be turned into Fallen God armor, which can be sold on the marketplace, and it’s still a great upgrade for any newer or more casual players. Finally, each class gains access to a new Abyssal skill. Your mileage will vary based on your class, with some skills being quite powerful and others useless, but having additional options is never a bad thing.

At the end of the day, Abyss One is another necessary evil for Black Desert Online players. The rewards greatly outweigh the inconvenience and completing all of the missions only takes a couple of hours if you don’t get too unlucky with the glitches. It’s just too bad the actual content isn’t more enjoyable.