I grab my rifle and run to the front line. It's oddly quiet, the officers and soldiers I imagined fighting with me are nowhere to be found. After psyching myself up for it I take my first step into no man’s land. Am I dreaming? Is the war over? No, the servers are all empty. Oops. Welcome to Beyond The Wire.

Beyond The Wire is a first-person shooter that throws you into the boots of a First World War soldier. Akin to Squad and other games like it, Beyond the Wire lets you choose your roles as a soldier. You may be your team commander or join a squad as an officer, rifleman, medic, grenadier, light machine gunner, and assault, which is basically anti-tank. You may also be an HMG leader, a recon leader, or an artillery leader.

If you have played Hell Let Loose or Squad, this game will feel like a mix of the two. The game utilizes Hell Let Loose’s equipment system, where officers may place spawn beacons and may do so once every few minutes. Every other role has access to similar equipment as each other with changes according to their specialty. Grenadiers for instance will have more grenades than the other roles. These roles can be leveled up through challenges and your character can be customized through items unlocked through leveling up that role. All of this is extraordinarily similar to Hell Let Loose. 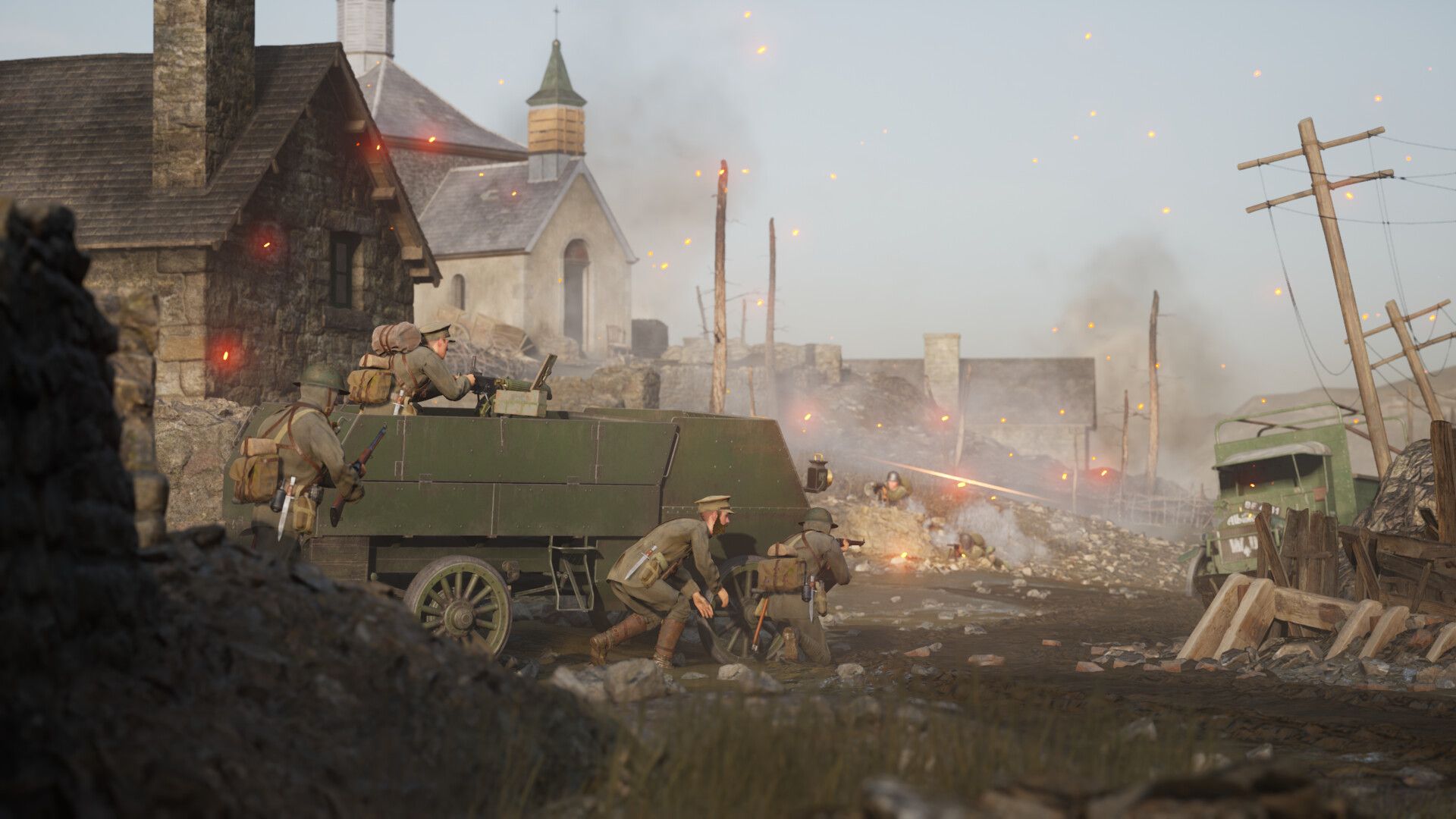 Beyond the Wire’s gunplay feels very similar to Squad where you must adjust for your range of fire and the guns have a lot of recoil. The strange part about the gunplay is the stickiness of the recoil. If I fire my Enfield the gun will jump, but then, as if my soldier doesn't have the capability to lower his own arms, it will just stay raised until I look downward again. This feels unnatural and makes the gunplay very sluggish.

As with most games, there are bugs. Most notably, it seems like the sensitivity dial does not work. I've attempted to turn my sensitivity down and the best I can do to make it so I can aim is to turn my DPI down. Having no way to change in-game sensitivity in an FPS is entirely unacceptable. This, coupled with a recoil system that makes you need to readjust to your target after every shot makes it incredibly hard to play without adjusting your mouse DPI.

Even though Beyond The Wire has the elements of other medium-paced FPS war simulator-style games, its pacing seems very slow. I would find it very hard to find a fight that wasn't dumb to take. Running up the enemy trench or hopping into No Man's Land doesn't seem like a good idea, but those were the only ways I could find people. Even then, most of the time I would just find their bullet in me, not them.

With the inability to push, like in reality, gameplay feels very slow. Most often I found myself aiming over the parapet trying to find someone's head, then, when I couldn't, I would try to push up. Sometimes I could, but this cycle tended to continue. Pushing into an occupied trench can be exciting, but, seeing as most times this would result in my death, it wasn’t smart. This leaves the gameplay in a place where it is hard to move from cover to cover without being turned into swiss cheese. Most of the time mine and the enemy team would be left unable to move and so engagements were sparse, and the game was slow for it.

Visually, Beyond the Wire looks great. The lighting is on point, the atmospherics and effects around the map set the tone perfectly. The destroyed look of the maps makes it look well fought over. Seeing as the First World War involved fighting over the same plot of land sometimes for weeks to months at a time, the details are well applied.

The audio design is quite good.  No matter where I am, I’m aware of everything around me: from the gunshots across No Man’s Land to whether an enemy soldier is coming up the trench behind me. It’s immersive in a way that makes the real issue of Beyond the Wire all the more pronounced. 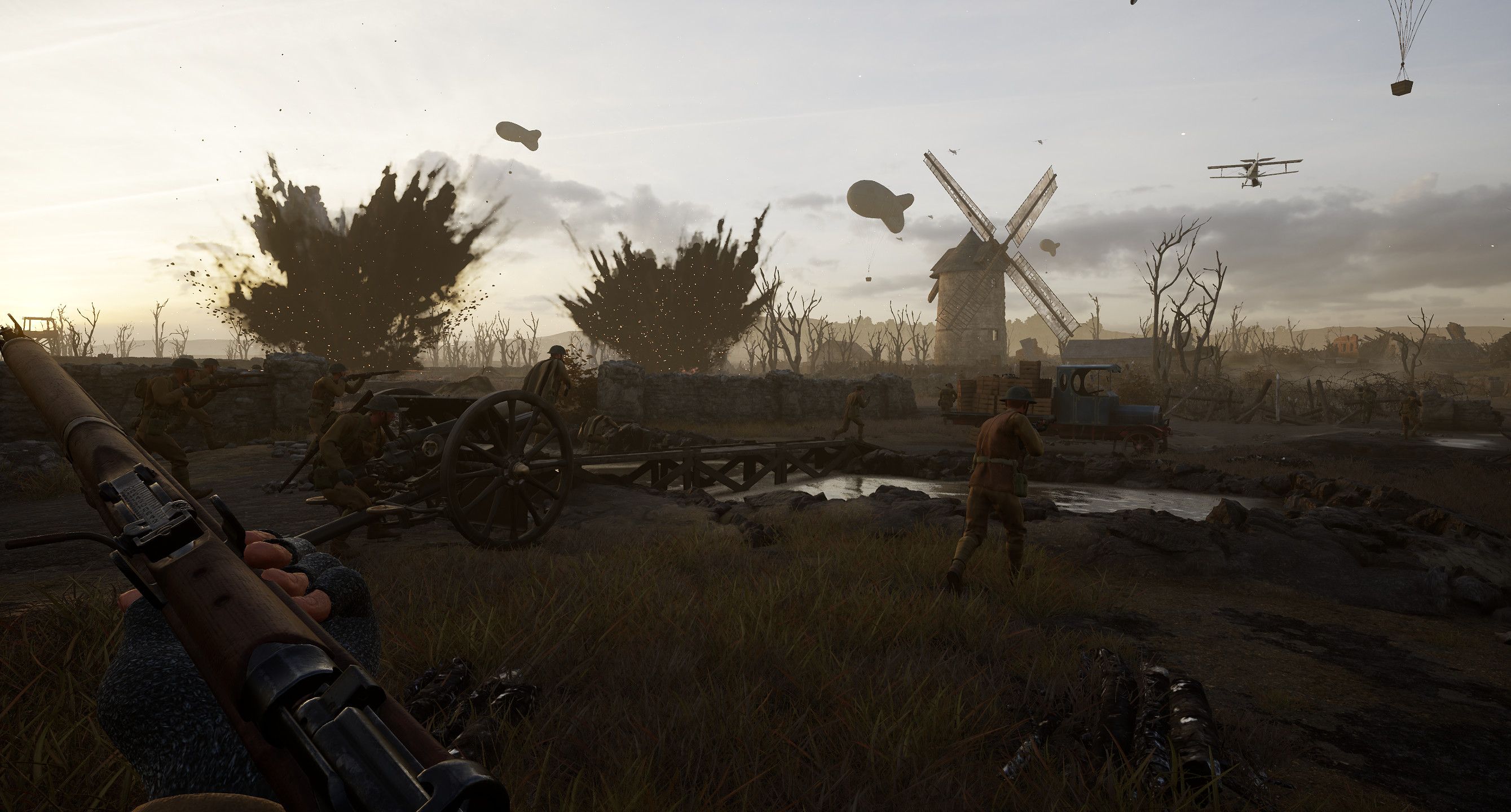 As I am writing this, there are a total of 2 servers that have players in them (Steam Charts today show a marked improvement, but it's still well below the needed 100 players per game). Both have exactly 1 player each. A 100 player map is not meant to play 1 vs 1. It's not even meant to play 15 vs 15, which was what I was able to find before the game completely died.

It's not hard to unpack the reason why Beyond The Wire lacks population. The game is slow, and lacks the unique features and gameplay that its competitors provide. As I mentioned before, the game feels like a mashing of the equipment, customization and leveling system of Hell Let Loose while having similar gunplay to Squad. And since the pacing is painfully slow, It would just be more fun to play Hell Let Loose or Squad.

It’s a shame too as Beyond The Wire shows promise of being a well-loved war simulator FPS. But it feels just like its competitors and thereby lacks uniqueness. This problem is exacerbated by its slow pacing and therefore the game has no player base. There is no single-player mode, and no matchmaking with bots. So, in its current state, Beyond The Wire is not worth the time to even open the game.

Tags
mmofps
beyond the wire