Drawing on the massively influential design of Advanced Dungeons & Dragons, the "holy trinity" of MMO design consists of a tank for taking damage, DPS (damage-per-second) for inflicting damage, and a healer to keep the others alive. For one thing, it was the foundation of many classic MMOs, such as EverQuest, Lord of the Rings Online, and even World of Warcraft. Modern MMOs tend to either eschew classes, such as New World with its classless design, or have found creative ways to vary the concept, such as Crowfall with a multitude of subclasses and specializations. Nevertheless, the trinity is still there if you look hard enough.

However, the trinity does not really work in Player-vs-Player (PvP) combat. After all, the tank-DPS-healer trinity relies on threat management, which is a simplified monster AI mechanic in MMOs where the enemy mob focuses its attacks on the player who is perceived as the highest threat. Human players will not be fooled by such simple tactics as a tank taunting them to focus their attention on a class designed to soak up damage. In other words, for PvP combat we must look beyond such simple mechanics as the trinity to more nuanced ones.

Few PvP MMOs are as finely balanced as Dark Age of Camelot, with its history of more than twenty years of official servers. While founded on the trinity for its Player vs. Environment (PvE) gameplay, DAoC has a sophisticated Realm-vs-Realm PvP system, with each of its three realms having 15 unique classes that fulfill different (and asymmetric) roles within an 8-man group. In fact, choosing the right group setup is a fundamental part of building a successful group for DAoC RvR. Just like the original trinity, the fundamental building blocks of any DAoC group is damage, healing, and damage mitigation (or, more broadly, utility), but the devil is in the details. Below I discuss each of these components in turn.

Damage is perhaps the most straightforward of the three. DAoC damage can be roughly organized into ranged and melee DPS, with some classes, like the Wizard, Eldritch, and Runemaster, being confined to the ranged domain, and some, like the Mercenary, Berserker, and Blademaster, being solely restricted to melee. The goal of any DPS class is to spike damage to kill a target faster than the enemy healers can keep them up. This can be deceptively simple: DAoC casters are glass cannons capable of high damage but are easily shut down, whereas melee classes are more resilient but are also more easily mitigated. However, even here there are distinctions: archers (Rangers, Scouts, and Hunters) are a special form of ranged DPS, and some casters (like the Enchanter, Cabalist, and Spiritmaster) are capable of point-blank AoE attacks (i.e. high-damage spells at melee range).

Healing is also relatively straightforward, with the only caveat being that DAoC organizes its healing classes into primary, secondary, and tertiary healers. Primary healers are the Friars, Wardens, and Augmentation Healers of DAoC, who train high in healing skill and are able to land massive heals at long range. Primary healers tend to wield equipment to support the equally massive power consumption of such big heals, and often have access to special abilities such as healing pools, instant heals, and power regeneration to aid them. Secondary healers, like the Cleric, Druid, and Pacification Healer (or Shaman), also tend to fulfill additional roles in the group primarily within the damage mitigation category, even if Smite Clerics can also output respectable damage under the right circumstances. Finally, tertiary healers, such as Heretics, Mentalists, and Valkyries, typically have other primary duties, but may either be able to heal while doing so, or can switch to healing mode in a pinch. 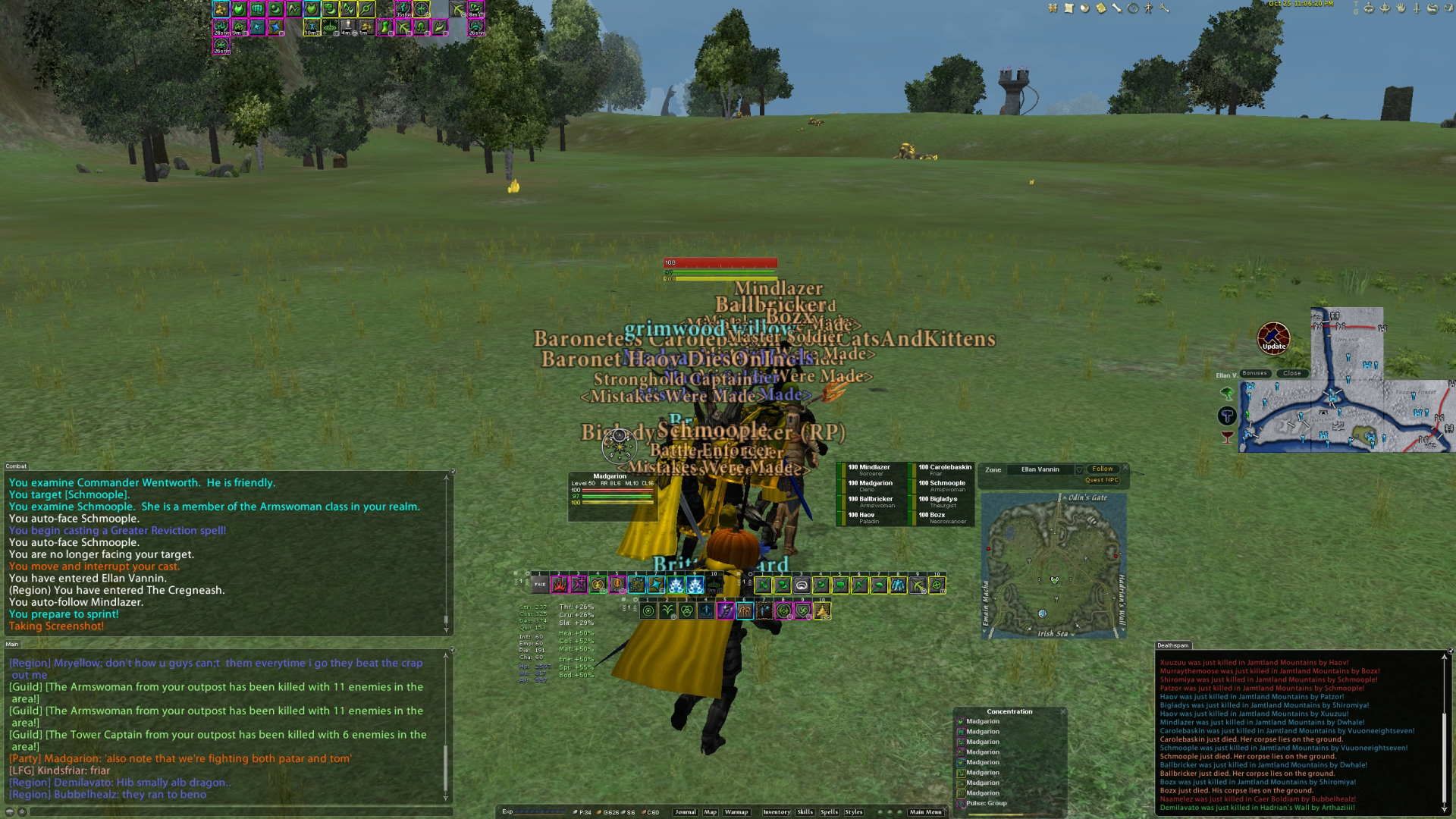 But it is in the third category of damage mitigation (or utility) that DAoC really takes the original trinity to new levels. Yes, just like in the trinity, DAoC's heavy tanks---such as the Armsman, Warrior, and Hero---have special abilities to soak up damage, resist enemy magic, and guard their weaker group members against enemy damage. However, because DAoC lacks collision detection (presumably because of network latency demands that were unrealistic 20 years ago), a heavy tank can simply not guard the frontline with its body. Instead, the role most analogous to the classic trinity tank for a heavy tank in DAoC is "peeling": using melee styles and skills to slow down enemy melee damage so that the friendly support or caster can get away. In a tricky situation, the heavy tank can also bodyguard a fellow group member, forcing the enemy damage dealer to focus their attention on the tank rather than the target. Unfortunately, this requires the bodyguarded target to remain still and leaves them unprotected against magic attacks, which can be a tactically bad decision.

Here it is worth pointing out that Warhammer Online, which was also created by Mythic Entertainment and is one of DAoC's spiritual successors, does have collision detection and accordingly lets heavy tanks form a shield wall to protect other group members. In fact, Warhammer Online, which is still alive as the Return of Reckoning freeshard, even provides a special ability for heavy tanks to bolster the defensive abilities of allies that are standing behind them.

But damage mitigation is so much more than just tanks protecting their weaker brethren. You can summarize these into crowd control, spell interrupts, enhancement, and debuffs.

Crowd control (CC) is a central concept in DAoC realm-vs-realm combat. Unlike MMOs such as New World, where CC is mostly restricted to a few short stuns or disorientation spells, DAoC has three primary types, the first two which are long in duration: mesmerization (sleep), root (immobility), and stuns (incapacitation). Mesmerize spells typically last up to a full minute at high levels, but breaks on damage and can be cured by classes in each realm with specialized cure mesmerization spells. Roots also break on damage but allow the rooted target to continue casting and meleeing, just not moving from their current spot. And stuns, which are relatively short in duration but leaves the victim entirely incapacitated even when taking damage. The Pacification Healer, Bard, and Sorcerer are the main CC classes in the three DAoC realms.

As stated earlier, DAoC casters are glass cannons: capable of inflicting massive damage (especially on a debuffed target, as discussed below), but easily shut down by DAoC's robust spell interruption mechanic. Basically, any spell can be interrupted at any time if the caster is hit by damage, crowd control, or certain debuffs. Being interrupted starts a timer that prevents the caster from casting again, and this timer refreshes whenever a new interrupting event occurs. This means that a caster can be permanently suppressed by regular interrupts, and interrupts is thus a dedicated role in many DAoC RvR groups. For example, the Minstrel, Skald, and Bard are excellent interrupters thanks to their speed and instant damage shouts, and certain classes such as Animists and Theurgists can even cast spawnable pets to keep the enemy casters interrupted until cleared. Furthermore, certain classes such as Healers, Sorcerers, Bards, and Mentalists can also cast amnesia, a special form of long-range interrupt that wipes any spell being casted but does not start the interrupt timer.

Enhancing your own team with buffs is not unique to DAoC, but the sheer depth that DAoC takes this concept is. All character attributes can be increased by stat buffs cast by secondary healers (eight types of buffs in total). The difference between a buffed and an unbuffed player is massive. Perhaps not surprisingly, this led to players early on creating dedicated "buffbots" whose sole purpose was to buff the player's main character from a safe place before they headed out into RvR. Nowadays, such buffbots have largely been replaced by powerful stat buff potions. Furthermore, both primary and secondary healers typically have resist buff chants that increase the group's resistance against different magic types, and you will need both a primary and a secondary healer to cover all six types. And finally, many classes have specialized buffs that they can cast to enhance their group, such as celerity (increase swing speed), damage add (imbues melee attacks with more damage), endurance regeneration (enables permanent sprinting and swinging), bladeturn (makes the first melee attack always miss), spell range extension, speed (movement outside of combat), etc. 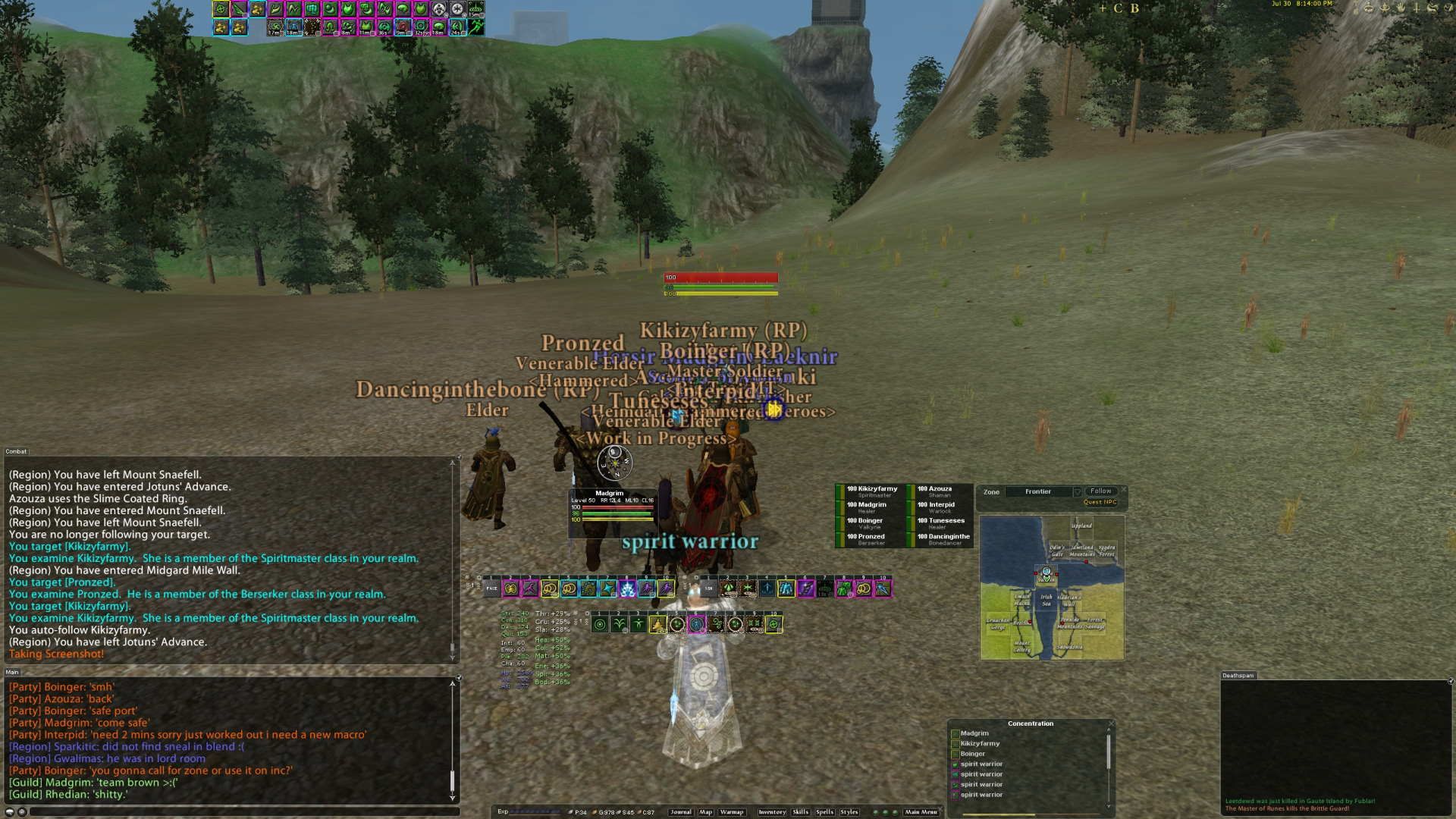 The dual to buffing your own team is debuffing the enemy, and DAoC has an array of these abilities as well. Stat debuffs temporarily reduce the associated attribute when cast on an enemy, which can be situationally important; for example, debuffing dexterity will increase a caster's cast speed, and debuffing constitution will reduce their health. Shear spells, which are given to each realm's secondary healers, permanently strip stat buffs from a target, but can be thwarted by special items to make a character un-shearable (you also cannot shear buffs a character cast on themselves). Disease halves healing on a target, making the job of the enemy healers that much more difficult. Nearsight spells temporarily reduce a target's casting range, effectively eliminating their ability to cast until the debuff is cured. Silence has a similar effect on spellcasting. And, finally, resistance debuffs temporarily reduce a target's resistance to a specific damage type, thereby opening the way for massive spike damage on the victim. Most viable DAoC 8-man groups have some form of resistance debuff, such as armor debuffing melee groups, heat spells for Hibernia, body spells for Albion, or spirit spells for Midgard.

An in-depth discussion of optimal Dark Age of Camelot setups is out of scope for this article, but by now it should be clear that there is a bewildering array of roles in PvP combat beyond the tank-damage-healer trinity of classic MMOs. Building a group means making compromises while adapting to the available players and the enemy groups you will encounter. And why should not the same ideas also be extended to monster AI in modern MMOs? Hopefully we will see more interesting mechanics than aggro and threat management in the future even when fighting computer-controlled enemies.