There is an eclectic selection of MMORPGs available for mobile devices, and new MMOs seem to come out nearly every month for iOS and Android. Unfortunately, new MMOs are much more rare for PC. So what are the best mobile MMORPGs that you can play on the go while you wait for the next big MMO to come out?

Even more so than on PC, there are different MMORPGS available on mobile to appeal to every type of gamer - from solo-players to guild leaders, crafters, raiders, dungeon runners, and PvPers - so trying to rank the best out of this list is purely subjective. That said, these are the best MMORPGs available on mobile devices right now and there is something here for everyone.

EVE Echoes is a fully-featured mobile version of the hit Sci-Fi MMORPG EVE Online. One of the few MMOs to be set in space, EVE Echoes not only shares the same universe as EVE Online but also virtually every other system in place - even the real-money PLEX currency. In our review we said, “For a mobile port, EVE Echoes is an incredible experience, it brings together many of the aspects of its desktop brethren while molding in some of the more autonomic systems for the casual mobile gamer. It’s a game with so much variety, pilots could get lost warping from one system to the next and yet, that complexity provides a ton to discover.” 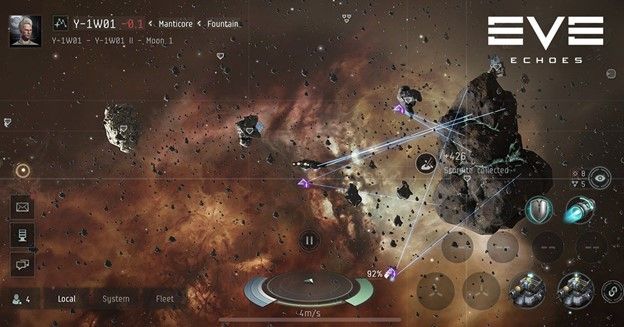 Fight against space pirates, run missions for different alliances, go mining in space, join a player-run corporation, and fight epic space-battles against other players. The best experiences in EVE are with friends, so join together and create a corporation to take on the massive space sandbox that is EVE Echoes.

Black Desert Mobile is a sandbox MMORPG by Pearl Abyss that features castle sieging, trading, crafting, player housing, animal husbandry, fishing, cooking, carpentry, parkour and more. This mobile version offers the same story, gameplay and combat systems from the PC version, with a streamlined progression system thanks to the more automated questing features. Although some may dislike auto-questing in mobile games, Black Desert Mobile leans into it by allowing players the capability to automatically progress through entire zones.

Black Desert Mobile does include an in-game cash shop, but mostly features quality of life and cosmetic options for purchase. There are seasonal events, like Halloween and Anniversary celebrations, as well as content updates that add additional playable classes like the Archer and Tamer. There is even an upcoming expansion with a new area to explore, the Great Desert region, coming later this year.

Runescape Mobile is a free version of the self-same game on PC available on Android, which just recently turned 20 years old. Although it is still in early access, and has been for over a year, RuneScape Mobile offers all of the same features as the same RuneScape on PC. In fact, it even features cross-play and cross-progression, which is great for continuing your progress when you’re not nearby your computer, so you can continue to grind mobs and level up skills while on the go. In RuneScape Mobile you can own your own port, run a farm, trade with other players at The Grand Exchange, and master 28 skills.

The graphics may be dated for an MMORPG on PC, but run perfectly smooth on Android. There is an iOS version currently in closed beta at the moment, with plans to release in Early Access later this year. The Steam version also just recently released last year, allowing players even more options for where they want to play. For those who prefer the old-school, more grindy nature of RuneScape there is also Old School RuneScape which is based on the classic 2007 version of RuneScape.

V4 is a cross-platform MMORPG for both PC and mobile in which players explore a fantasy land called Syllunas. V4 features six playable classes that are wholly offense-focused, instead of splitting roles between tankers and healers, so as to allow all players to focus on dealing maximum damage. In our review, we said that, “Even as someone who considers themselves a “core” gamer, there’s enough here to keep me interested which means “casual” gamers are likely going to have a lot of fun.” 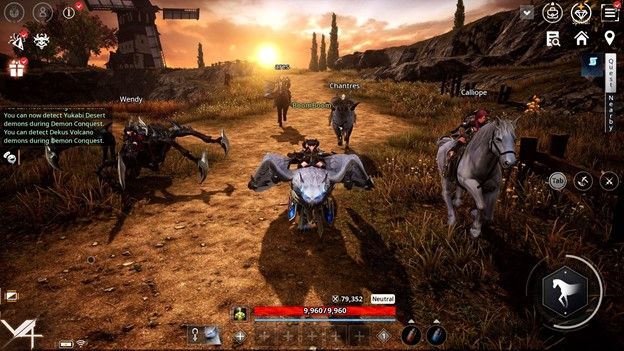 Unlike some other MMOs on this list, Lineage 2: Revolution is not a port of a PC game. Instead, Lineage 2: Revolution is a prequel set 100 years before the events of Lineage 2. It’s also rendered in the Unreal 4 engine, making it look on-par with some of the best MMORPGs out there, and is most noticeable by the size of the in-game regions. The scale of the open-world environments is colossal for a mobile MMO, allowing up to 200 players to fight simultaneously in the same zone. Additionally, there is a strong emphasis on PvP gameplay with several different modes to choose from including 50 vs 50 Fortress Siege matches, 20 vs 20 battles, and a new 5 vs 5 PvP Battlefield that expands the previous 3 vs 3 Honorable Battlefield matches. 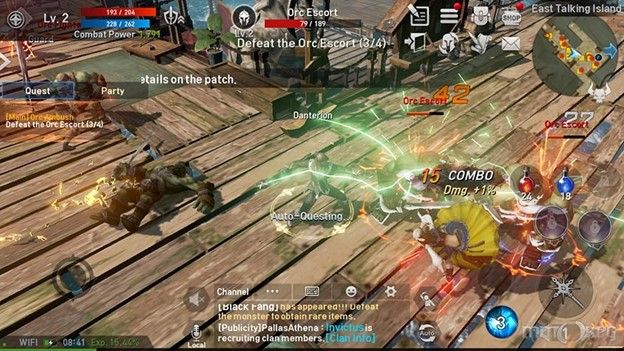 We said that, “Lineage 2: Revolution has all the trappings you would expect from an MMO, including PvP. It launches with Fortress Sieges which is thirty versus thirty live combat. It can get quite chaotic during these fights with skills going off left and right and trying to survive long enough for your skills to come off cool down to get that last hit in to take down the enemy player. PvP is the aspect that the game shines in with these huge battles and bigger ones to come in future updates.” The cash shop does feature a lot of Pay-to-Win options, but also cosmetic and quality of life improvements. You can join a guild, party with other players, tackle raid dungeons, and fight in PvP modes all in Lineage 2: Revolution.

Another cross-play and cross-progression MMO is Adventure Quest 3D. This is a 3D re-imagining of the original flash browser game, Adventure Quest Worlds, and is available on PC, Mac, iOS, Android mobile devices. This game is wholly free-to-play but has a cash shop that features cosmetic items and quality of life assets like the ability to unlock new classes. Adventure Quest 3D emphasizes social play via its true cross-platform and cross-progression play, as well as having the ability to instantly teleport to your friends.

There are new updates nearly every week and regular seasonal events in-game, like the holiday event Frostval and the recent Carnaval celebration. Challenge other players in PvP at the Arena, explore an in-depth crafting system, join your friends in a guild, and complete daily tasks in Adventure Quest 3D.

Albion Online is another MMORPG that is available cross-platform and has cross-progression between PC, Mac, Android and iOS mobile devices. It is comparable to RuneScape in many ways, including both its graphical style and the way that skills increase from use rather than by leveling up your character. The economy is also entirely player-driven where every item is player-crafted and combat skills are tied to gear, not to a particular class. There is a premium membership option that increases fame gain, gathering yield, and loot from mobs and you can also spend real-world money to buy in-game gold directly. 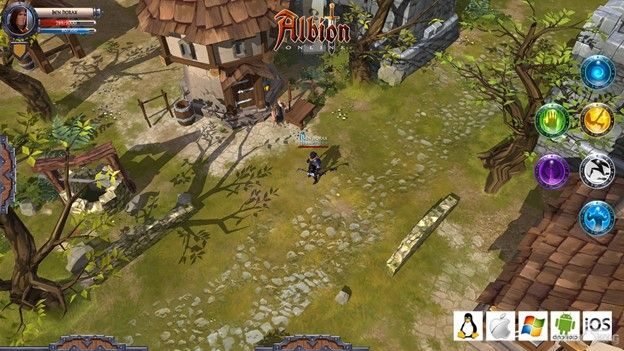 There is a big emphasis on PvP, especially between player guilds, as there are over 800 different territories that guilds can control which gives them rights over that area for either tax collection, farming territories, or a buff for easier resource collection. We said in our review that, “They seem to have struck a wonderful balance between pointing player towards activities and letting them wander and find adventures on their own. A lot of players can be turned off at the idea of losing their things on death but I'd say to not let it bother you too much since you can either avoid PvP or ease yourself into it. For anyone who is looking for an old school MMO Albion Online is a perfect fit.”

One of the newer games on this list, Bless Mobile just launched in January of 2021. Like Lineage II: Revolution, Bless Mobile is also rendered in the Unreal 4 engine and is one of the best looking MMORPGs available to play on-the-go. There are four different races and five classes to choose from, with the combat more akin to an Action-RPG than other MMOs. There are both solo and multiplayer dungeons to play through, PvP modes, player Guilds, and Life Skills you can level up like mining and fishing.

Bless Mobile does feature an autoplay mechanic so you can play while doing other things, although it doesn’t do everything for you like accept quest rewards. The cash shop features cosmetic items, mounts, and quality of life items as well as gacha summons to obtain pets and gear.

Perfect World Mobile is a portable remake of the 2006 MMORPG, Perfect World, bringing the classic world to both Android and iOS mobile devices  with enhanced graphics and a seamless world. Take to the skies with Perfect World’s unique flight system, and fight foes in the skies, on the land, and even in the oceans. Form a guild with other players, and team up with the improved party and mentoring systems. You can customize your character and choose between three different races and five different classes to start your adventure.

There are added auto-play and AFK features, letting you quest automatically and continue to grow more powerful even while not actively engaged, which help to reduce the grind. There is a cash shop which includes both cosmetic items and quality of life items, but also includes items that directly increase stats for a better advantage.