Ashes of Creation recently held their Alpha One Preview event this past weekend. I had the chance to dive into this small slice of the upcoming MMORPG and came away with some surprised thoughts. What did I think of it? Read on, dear readers.

Before we begin, I think it’s important to establish a few things up front so as to provide context for this article. First and foremost, the test over the weekend was an alpha, not a beta. A popup at the beginning of the test presented a letter of sorts from Creative Director Steven Sharif explicitly stated this test was not a content test. Rather, it was intended to test things like stability, log in, etc. Therefore, it’s best to think of any content within the test as placeholder.

That being said, I began my adventure in character creation. After reading the various race descriptions, I settled on Empyrean (because of course I would). I went with the Mage class because I really wanted to see how all the combat visual effects shook out during the heat of battle. Plus, I just think mages are really cool. 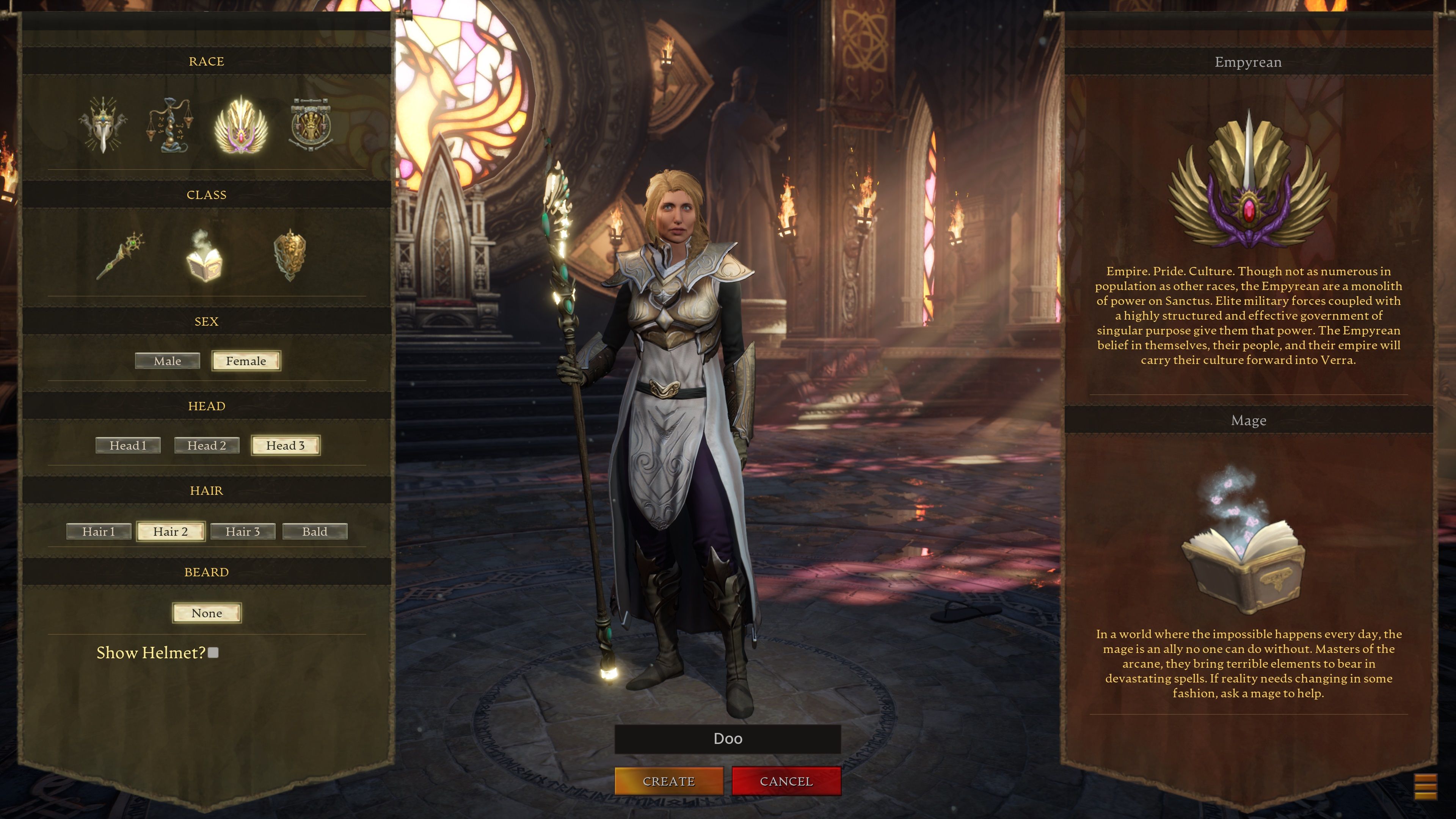 The actual act of logging in was surprisingly smooth for me. The usual loading was present, but I never found myself in a queue or stuck loading for ages. Once I logged in, I was met with the starting encampment. I was immediately struck by just how pretty the game looked, even in this alpha phase. Those of you who know me will know I place a premium on visuals, and in this regard, Ashes of Creation certainly didn’t disappoint.

When it comes to fantasy, I strongly prefer classic fantasy. This is why Elder Scrolls IV Oblivion is my favorite game of all time. Strong classic fantasy visual design certainly goes a long way for me. Ashes of Creation so far has this in spades. But adding to the spectacle was the music. Again, it is no doubt placeholder, but it still went a long way to establish the mood and atmosphere of the world. I did feel that I was in a special world. More on this in a bit.

The first quest was a basic kill quest. It was here I first tried my hand at combat. As a mage, the combat felt solid. It wasn’t as dynamic or kinetic as Black Desert, but it never felt boring for me. As I leveled up and unlocked more active skills, the sheer spectacle of combat increased. For example, I unlocked an AOE skill which dealt a huge blow of fire damage to enemies. The simple act of activating the skill and watching the resulting explosion never became dull. The various particles and effects from combat as a mage remained glorious throughout my time in the preview test period. 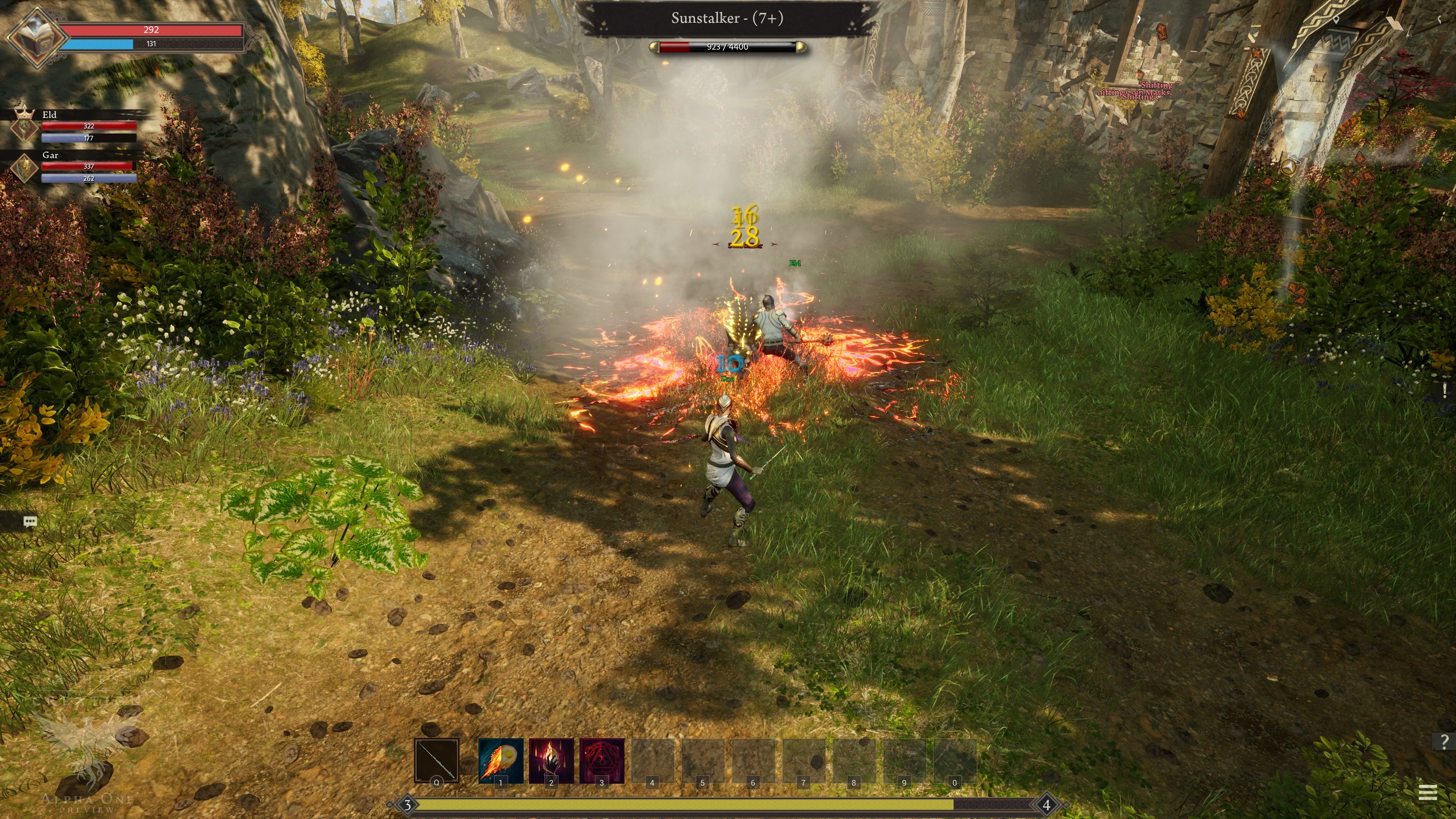 Fortunately, I was able to group up with Bradford and Garrick. While emotes remained limited, I am happy to report I was able to wave to Bradford as is tradition. Hello. From this starter encampment, we were able to grab a few quests as we set off into the world.

I should reiterate that this preview test is not a content test. Therefore, while I personally found these quests rather dull and forgettable, it’s important to keep in mind this testing context. The quests were rather simple: go here, collect X, kill Y, find Z, etc. Ultimately, we settled on a quest tasking us with heading to a nearby cave and rescuing two people.

Here is where Ashes of Creation really opened up for me. While the quest itself was pretty meh, the actual journey to the cave was thoroughly enjoyable as we were flanked by spectacular scenery including valleys, distant mountains, a far-off erupting volcano, and winding rivers far below. 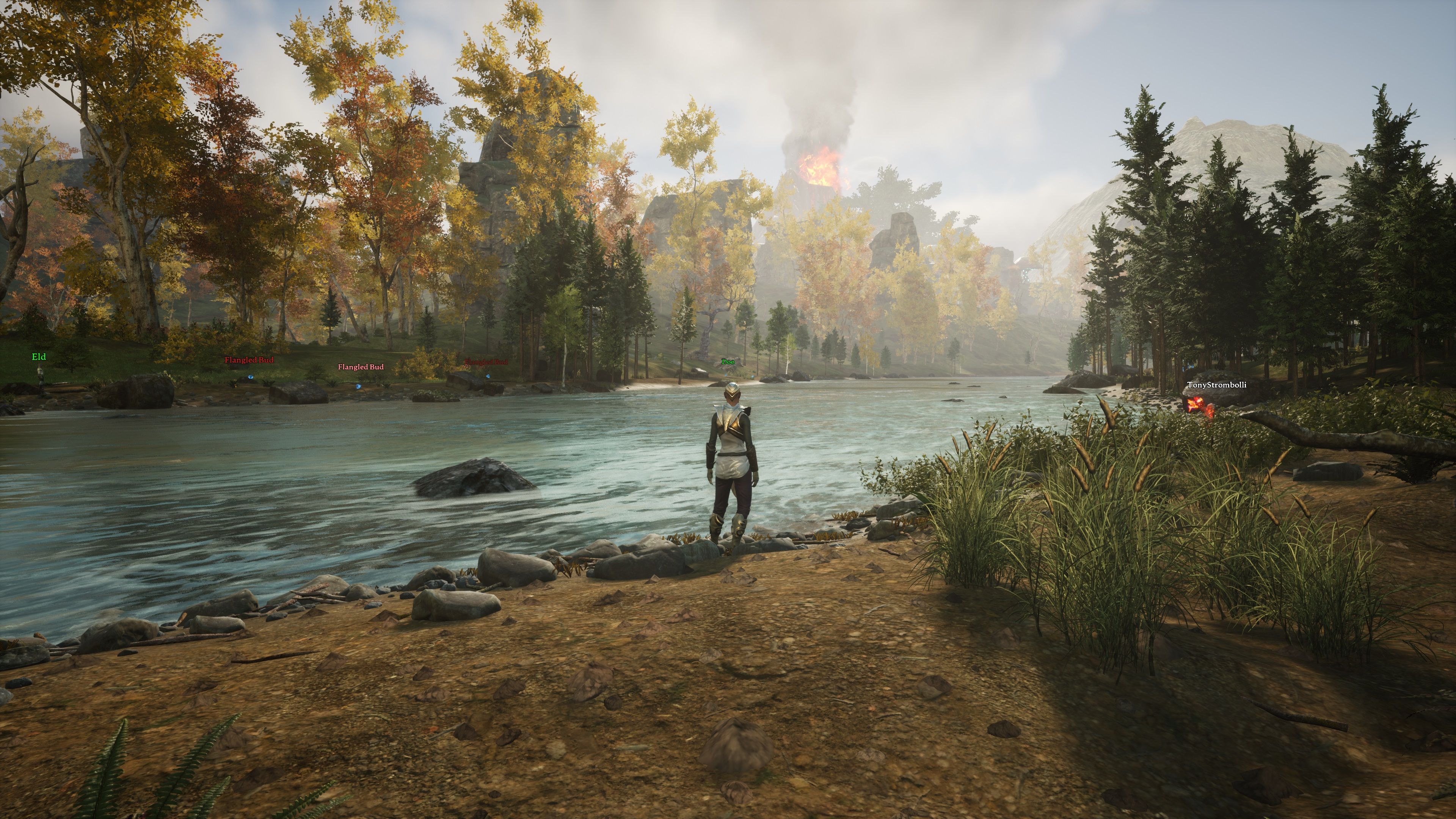 In fact, I consistently fell behind my party as I kept stopping to take screenshots. As I alluded to above, a gorgeous world really goes a long way for me. I am an explorer by nature. This is one of the reasons I love Elder Scrolls Online so much. The ability to just pick a direction and walk will never get old for me.

In that context, Ashes of Creation’s alpha one preview absolutely nailed it. So far was the draw distance that I inherently felt the urge to just go explore. It’s here where I may lose some of you, so bear with me. I suspect most players prioritize content in their MMOs in the form of quests, crafting, dungeons, and the like.  And this is perfectly fine. One might say this is normal and painfully obvious.

However, I am not like most players. I prioritize a good world. For me, the larger the world, the better. The more beautiful that world, the better. I want to go explore. Note, I am not saying I do not like questing, dungeon diving, boss-fighting, and the like. I am simply saying those activities are not my priority.

For me, exploring is gameplay. Wandering around and discovering derelict ruins, getting lost in ancient forests, and summiting the highest peaks is content. As I see it, the developers and artists put these things in the game for the very purpose of being discovered. Just as questing is important, so too is the simple act of picking a direction and setting off.

And what a world it was. I loved every second of journeying across the land. A highlight for me was seeing an autumnal forest in the distance, and then journeying to it. The forest was dense and detailed. Having grown up in New England – and Autumn being my favorite season – I really did feel as though I was in a real forest. The team at Intrepid nailed the foliage and gorgeous colors.

It is for that simple reason – the truly beautiful expansive world – that I really did enjoy my time in the Ashes of Creation alpha one preview over the weekend. Like I mentioned, it’s best to think of everything in the alpha one preview as placeholder. But if the Alpha One test set to begin tomorrow is of any indication, I really do think Intrepid is on the right track in nailing the look and atmosphere of Ashes of Creation.

Tags
ashes of creation
impressions
alpha one
alpha one preview