Cloud Gaming, when done right, is the great equalizer for accessibility and content. It enables gamers to play whatever they want, wherever they want, and every so often, however they want. Amazon Luna was announced September 24th 2020, with an early-access, invitation-only subscription service, that started October 20th and promised a growing library, 4K gaming, and the ability to play just about anywhere.  With Amazon’s Luna controller in hand, and several dozen games at my disposal, how does Luna stack up to the other cloud services?

Amazon Luna is still in its infancy, but out of the gate the one thing that Luna does well, possibly even better than all other current services on the market, is that it is far more accessible. You can play Luna on anything from your Windows PC, to your Android Phone or Tablet, and yes, even your FireTV devices like a Firestick. The major caveat to playing on most of those devices, is that you will require a controller, and for ease of access, you will likely want to make that a Luna controller (MSRP $49.99). 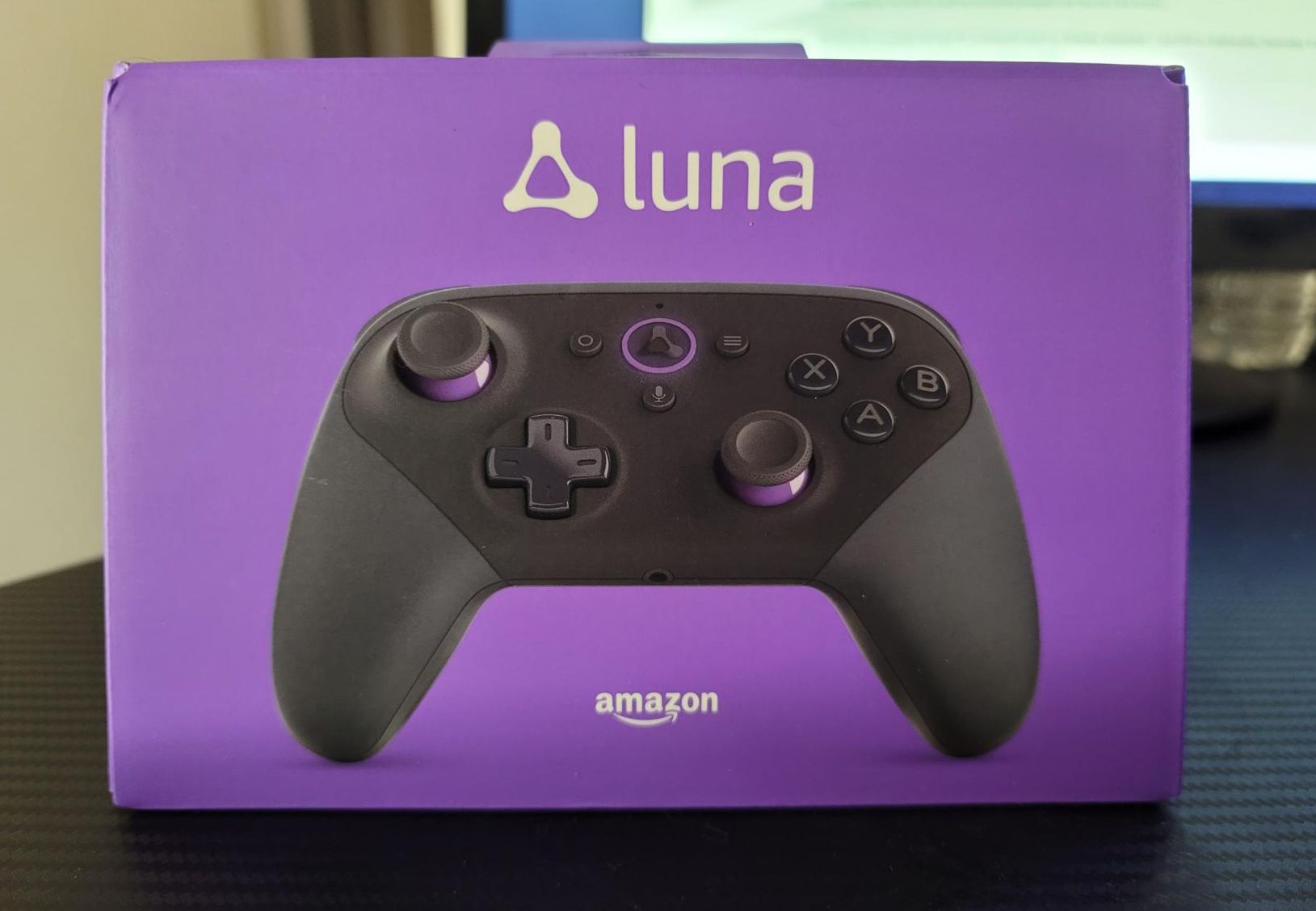 The controller itself is modestly impressive. As a gamer that has used more than a handful of controllers, from console controllers like the Playstation and Xbox devices, to brand like SteelSeries and Madcatz, to the, now obsolete, Steam controller, the right controller can make all the difference when playing certain games. The Luna controller doesn’t go off the rails with any unique button configurations or complex touchpad systems. The shape and button layout resemble an Xbox controller with only a few minor changes. The big Luna button in the center is used to turn on and off the controller. Underneath the Luna button is a microphone button which, like many other Amazon devices, will enable Alexa so that you can issue commands. Every other button conforms to an Xbox One controller, down to the labels of the buttons themselves.

The controller has a little bit of weight to it, and feels very well balanced. With batteries, the Luna controller is marginally lighter than an Xbox One controller, coming in at Amazon’s Technical specifications of 9.93 ounces to Xbox’s 10-ounce controller. The weights listed are with batteries installed, and depending on the batteries, the negligible weight could change and is really too close between the controllers to feel any major difference. I actually like the balance of the Luna controller, and it proves to be useful as a counterweight, most notably when using the Dainslef Phone Holder to play Luna on a mobile device. The Dainslef Phone Holder is a plastic locking device that was built specifically for Amazon to attach your phone to your Luna device, but it does come at an additional cost. 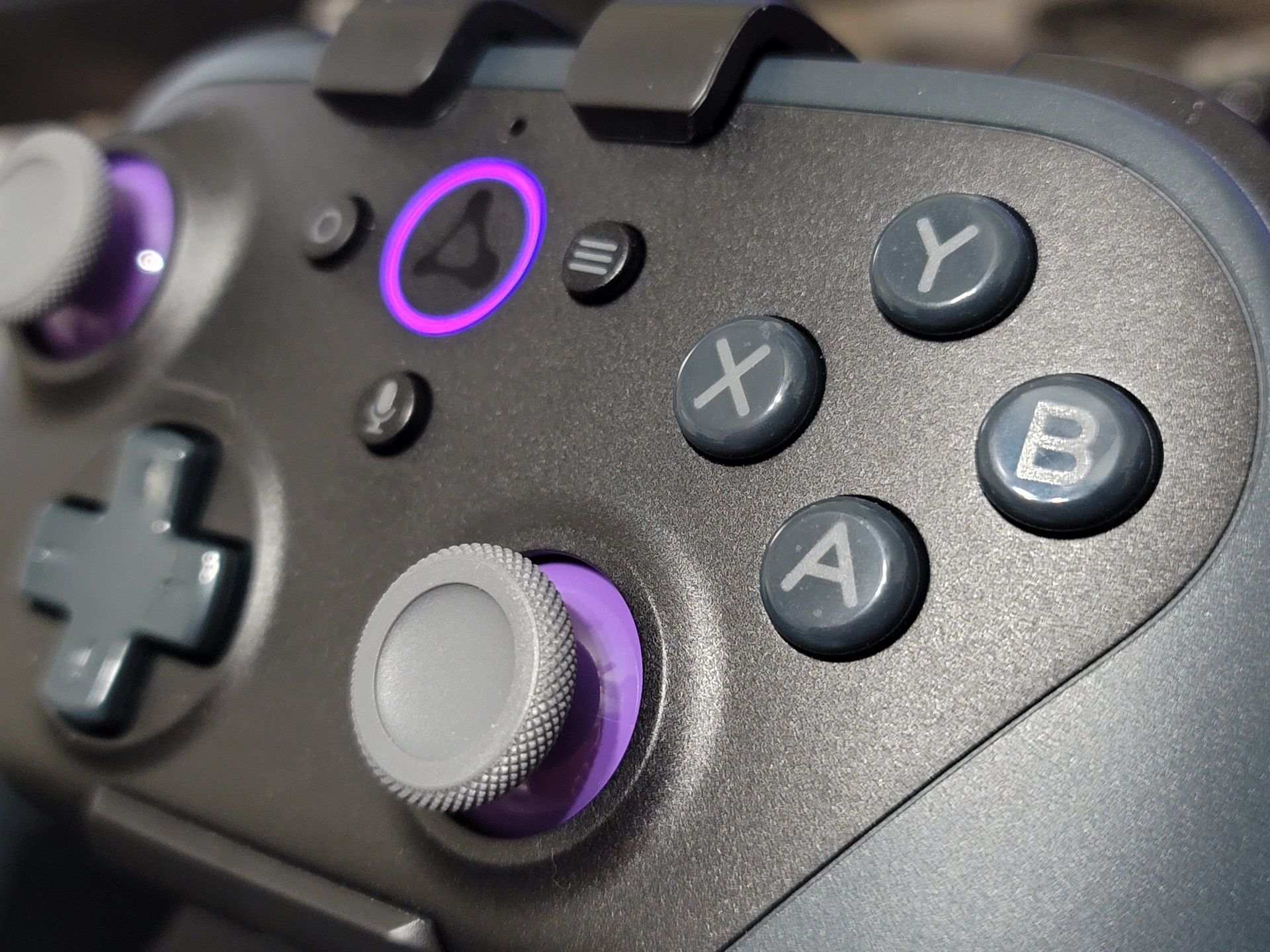 My main consternation with the controller itself has to do with the twin thumbsticks. Similar to the Xbox One controller, the thumbsticks are concaved a little, but unlike the Xbox One controller, that indenture is a little too much, and it makes them feel like tiny suction cups on your fingers. These miniature twin-stick egg-cups are not nearly as comfortable, but are still reactive and snap back better than the SteelSeries XL. 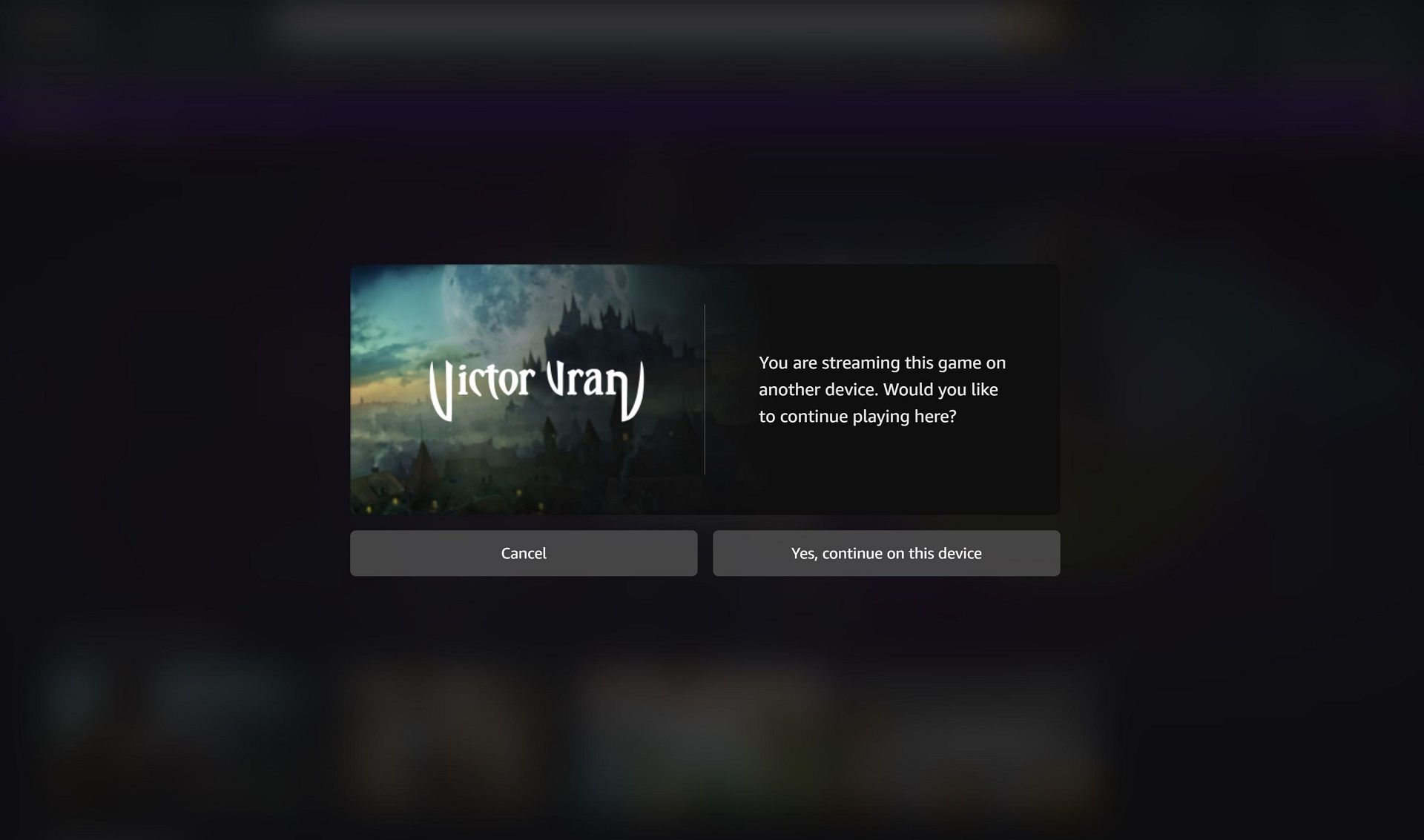 The Amazon Luna Service currently costs $5.99 a month, roughly two dollars more than GeForce Now, which doesn’t come with any games. Luna is also about four dollars less than Stadia’s subscription which does come with a different, but smaller, pool of free games per month. Luna pricing is not guaranteed and Early Access pricing is subject to change, but at its current price point, Luna is somewhat competitive. From a service perspective, Luna’s library omits a large swath of games that Stadia has access to, even if you have to purchase games outside of the Stadia subscription to obtain them. Luna has an option to subscribe to Ubisoft+ for an additional $14.99 a month, but that service is also available on Stadia, and GeForce Now already has a vast library of Ubisoft games available for play.

How Are the Games?

The library for Luna is embarrassingly limited. It is quite understandable that any service in beta needs time to grow, but the pool of games I personally wanted to play, boiled down to a handful of games like the action-RPG Victor Vran, the action-adventure title Control, and the racing game Grid. I tried each game on different hardware, and even attempted to swap back and forth mid-game, which is something not easily achieved on Cloud Services that aren’t Shadow Cloud. Shadow Cloud utilizes its own virtual instance of windows, and will stay alive for several minutes even after you close out of the program, but most services end your progress the moment you close the game. 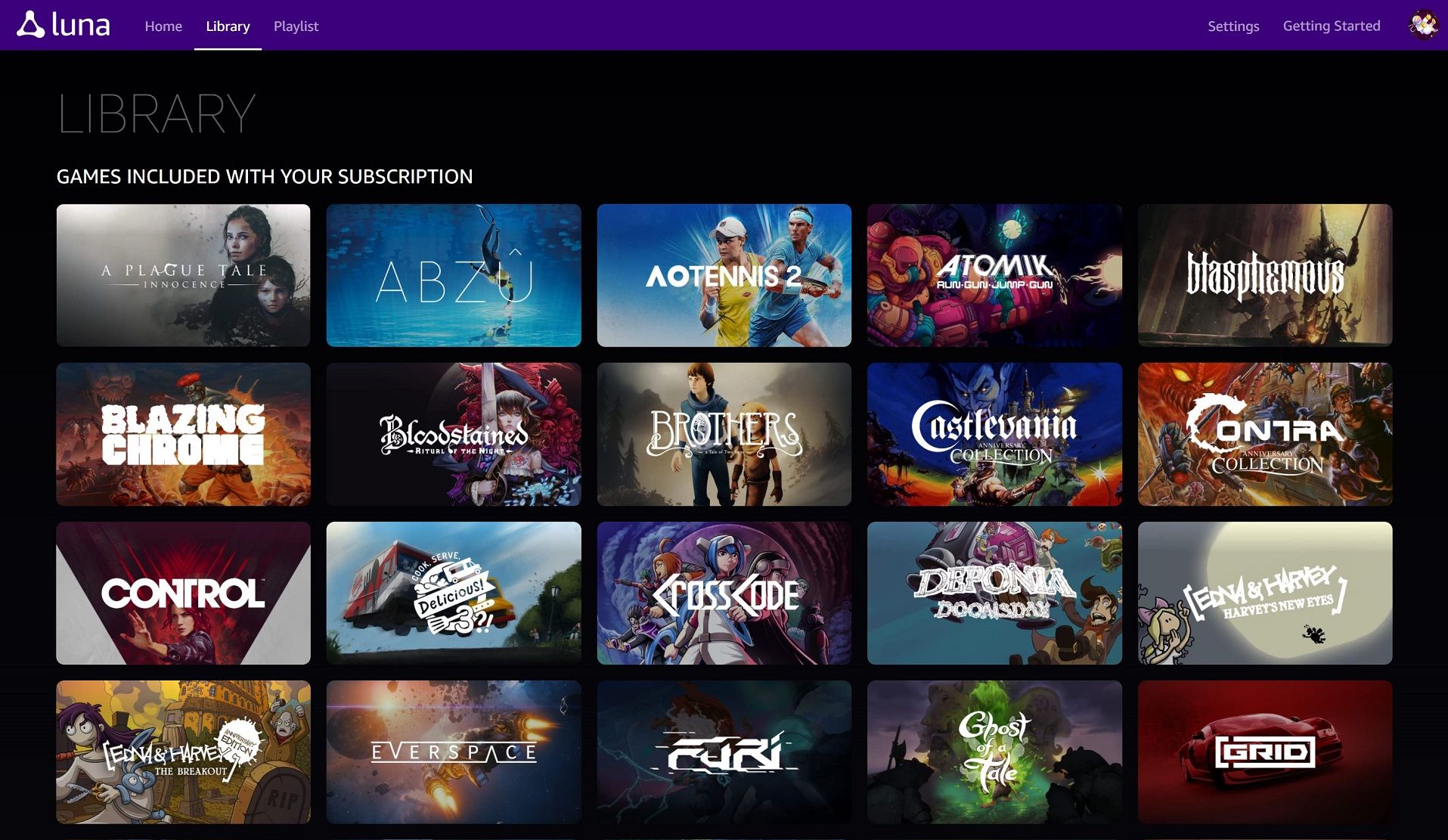 When I finally sat down to play, I loaded up the Luna app on a TV that had a Firestick connected. The first title I chose was Yooka-Laylee, a side scrolling platformer that seems to take the majority of its inspiration from Banjo-Kazooie. My first experience with the game, and the service, was a pretty poor one. Yooka-Laylee actually required some modest timing, and the input latency was so terrible, I couldn’t stand playing it for more than a few minutes before I gave up altogether. The wireless connection to that Firestick was a solid 300+ Mbps, so my conclusion was a potential connection problem with the Luna Controller that created the input latency. 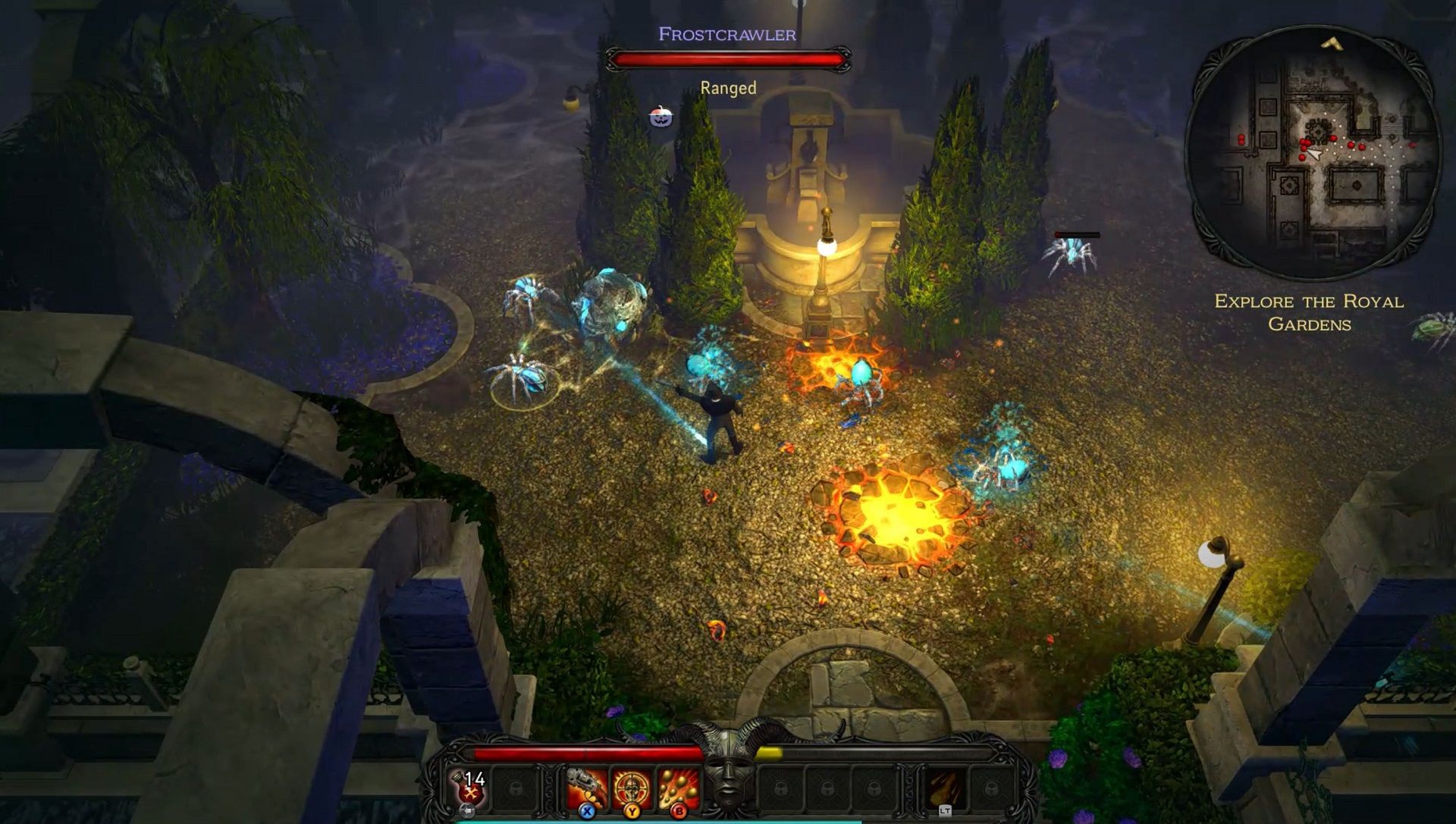 My second attempt was on a different TV with a different Firestick. This time, latency was much better, and I loaded up Victor Vran. The visuals were crisp, with little to no perceptible compression, and the input latency was less. The latency was still there, but far less than before. I decided to pop-over to my laptop mid-session and see what would happen. Sure enough, Luna detected that I was already in a play session and asked if I would like to continue from there. I selected yes, only to find out that despite Microsoft’s Edge being built on the Chromium platform, Luna required Google Chrome or else I wouldn’t be able to continue playing. It ended up kicking me out of the session, but I loaded up the Chrome Browser and picked up from where a left off moments later. It took only one click from the Luna settings menu to get my Laptop to recognize my Luna controller, and I was off and running. I was also happy to see Luna had options to play certain games with multiple inputs, meaning I could use a Mouse and Keyboard when I inevitably misplace my Luna controller.

Several times through my play session, I received notifications that my connection was slowing, or had dropped. To my amazement, it affected my gameplay very little, which is a far cry better than what most services do. I did notice a small amount of latency in my control inputs while receiving the poor connection notification, but extreme pixilation or increased compression didn’t rear its ugly head. My final in-network attempt at playing on Luna was from my mobile device.

I decided to try my hand at Grid which is a fast-paced racing game. In order to play Luna on my mobile device, I had to login to Amazon through the Chrome Browser, and then set it as a shortcut on my home screen. After loading in, the biggest disappointment that I had, revolved around the limited resolution options. The game itself looked impressive, as crisp and free of defect as the test on my PC or Firestick, except that the game had black bars across the sides of the play window. This isn’t anything new, but usually when games slim down the resolution on mobile devices, it’s due to the addition of on-screen controls. With Luna controller in hand, I do feel a little cheated that there was so much wasted space on the screen. Mobile devices are small enough without being relegated to even smaller view spaces.

Frolicking through the land of Luna left me with the impression that Amazon is on the right track here. The game library is lackluster, and in several situation I had far higher perceptible input latency than other services. The mobile resolution was similarly a letdown, and the strange obsession with Chrome, when Edge is also built on Chromium is a little strange to say the least. Despite some vast library growth that Luna needs to be competitive, and some minor technical hiccups, the visuals were crisp with no perceivable compression or visual distortion during my sessions. Every game I tried loaded extremely quickly, and I accessed Luna across many different platforms, all of which worked well.

Luna is nothing if not impressive. Unfortunately, the small library holds it back from being my daily cloud gaming choice. Amazon has a long way to go before Luna is ready for primetime, so if you’ve been patiently awaiting your invite to Luna’s Early Access, don’t feel too bad if you haven’t been selected. Luna needs several more months in the oven, and a lot more titles under its umbrella before it will earn the envy of any of the other Cloud services.