Aion Classic launched last week, heralding a a return to the original version 1.0 of Aion that was released in 2009. This takes Aion back to before any of its expansions, any of its added content like new classes, and back to when leveling up was a lot more laborious. I remember playing Aion on launch day, and its flight system and flashy combat hooked me in a way that the likes of World of Warcraft , Guild Wars, and Warhammer Online back then just couldn’t. Unfortunately, I remember the grind becoming too much for me back then and I quit the game a year later when Final Fantasy XIV originally launched.

But that fiasco is a whole ‘nother story! Today, I’m here to regale you with my experiences this past week playing Aion Classic again - almost 12 years later. While Classic launched for South Korea last year in November, but we didn’t receive an official Western announcement until two weeks before launch day, which is not a whole lot of warning to prepare. I knew I was going to hop in on Day 1 again, especially since it was mentioned that the leveling process would be easier, and that “adjustments have been made so that the highest level can be reached in a shorter amount of time.” Cheers to that! So after one full week, how is Aion Classic?

First of all, like any new MMORPG - even with this just being a classic server launch - there are bound to be some hiccups on launch day. Aion Classic was no exception, but I feel like the problems that it experienced were relatively minor. The initial server launch time was pushed back 30 minutes from extended server maintenance before launch, which is fine. Then the Siel server appeared to be full and no one could log in for a bit, including myself. I tried logging in to the Israphel server, and was able to join a queue. Unfortunately, that queue was over 9,000, and it took about 30 more minutes for me to get in. So in total, it was about an hour delay. 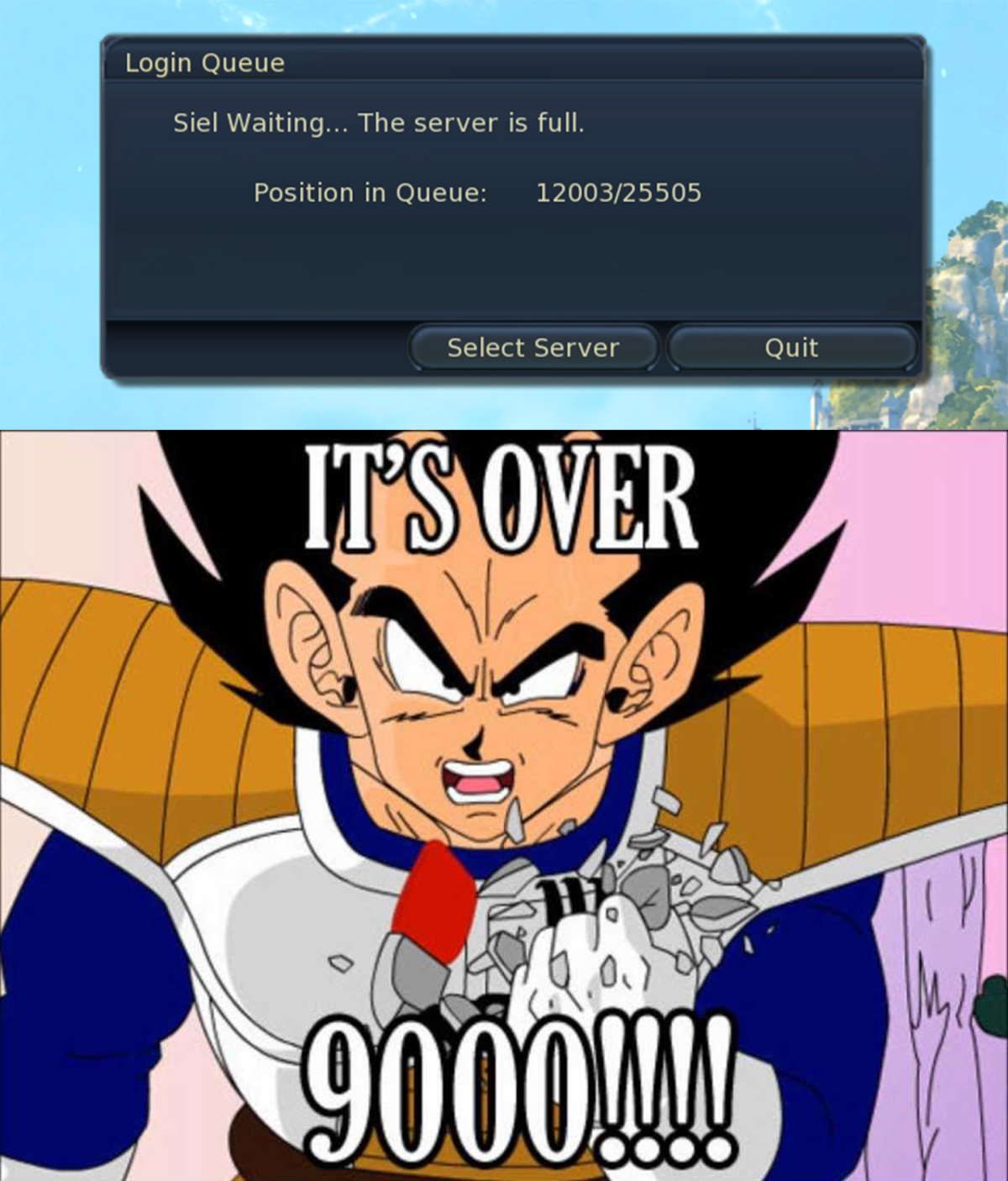 Personally, a minor issue. I am at a different point in my life than I was 12 years ago, to where I don’t schedule my entire day around an MMORPG launch - although, to be candid, I wish I still could. The queue cleared up after a couple of hours and the servers seemed stable all throughout the day. I count that as a win for any MMO, in my book. Finally logging in to the starting area for the Asmodian side again struck me with a wave of nostalgia that I hadn’t experienced in an MMORPG since I replayed Final Fantasy XI a few years ago. I was elated to experience this journey one more time, and a flood of emotions came over me as I picked up the beginning quests and started to wail on some unsuspecting mobs. There was no misunderstanding with what Classic was going to be: I was in for a grind.

Combat flows at a decent pace, although there is only a standard auto-attack and one attack skill in the beginning. I like that skills are on a per-skill cooldown, meaning that there is no global cooldown like in Final Fantasy XIV. Additional skills - both active and passive skills - are purchased at a class trainer when you’ve achieved a certain level to be able to unlock them. I forgot that this system existed - even though there is a quest that literally explains this to you - so my first couple of hours may have been a bit bumpier than others’. It does cost kinah, the in-game currency, to purchase new skills which do get pricey at higher levels. Certain skills can also only be obtained as a random drop from killing mobs in the field, which players will often sell for extravagant prices on the market. 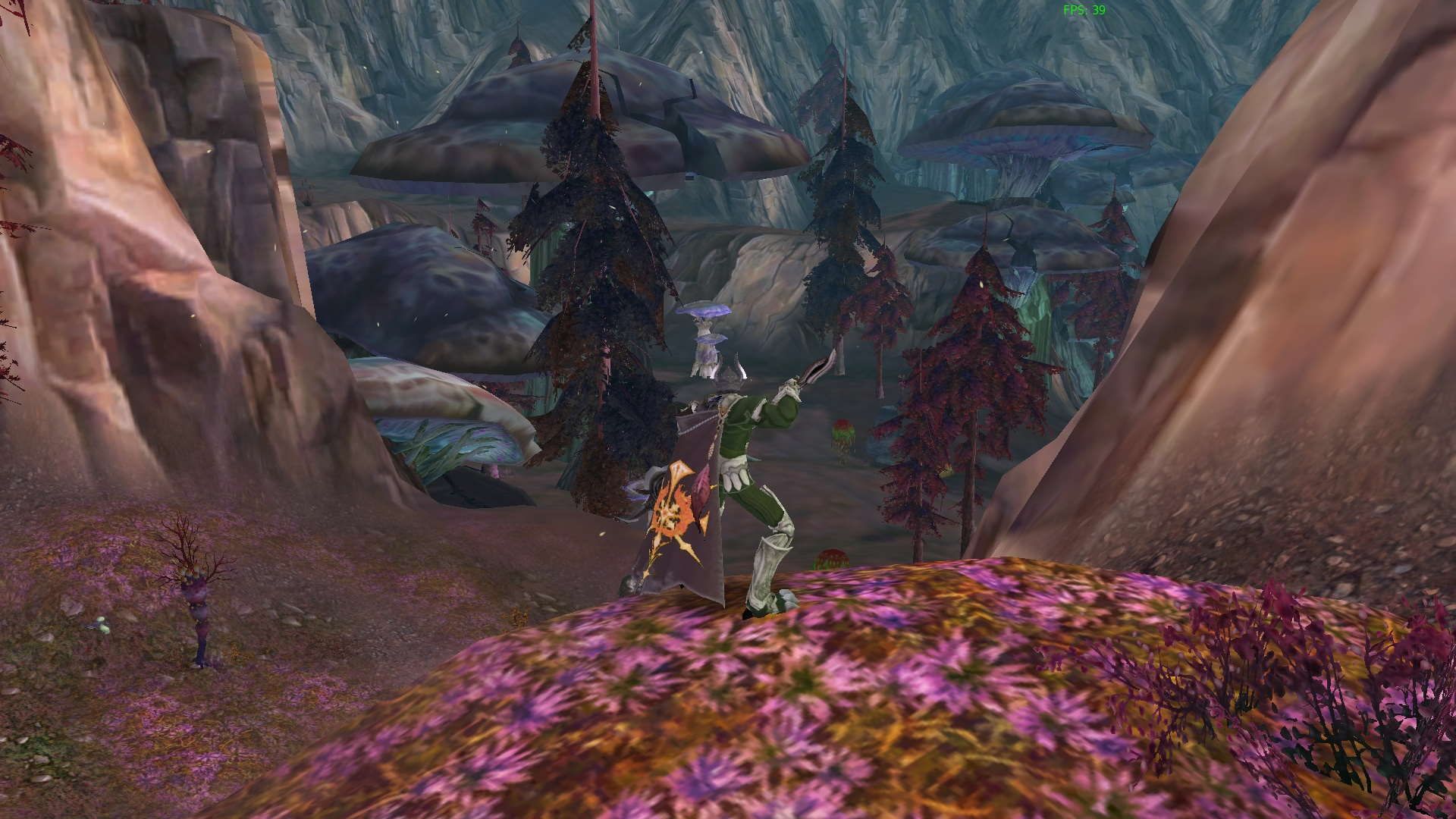 Questing structure was brought back from the original launch, including all of the quests and side quests that were removed from today’s version of Aion. This also meant that a large influx of starting characters made it almost impossible to complete the beginning missions, since everyone was fighting over the same mobs and quest objectives. Which, again, really hit me in the nostalgia since I remember this same issue from before. Luckily, if you were to make a new character now and hop in you won’t have any problems logging into a server or completing these beginning quests. The population flow has stabilized this past week, meaning you won’t have thirty other players competing for the same two monsters.

Aion Classic still looks great too, considering its age. I think the character models hold their own and the animations for both player characters and NPCs look fluid and exude personality. Let’s be real; Aion has one of the greatest character creators of all time. Player character designs can range from the marvelously beautiful to the horrendously revolting, and even to the comical extreme when it comes to body shape and size. Unfortunately, I wish some more attention was given to the environment and flora. At maxed settings - which is not difficult on modern PCs - texture pop-ins and effects, such as shadows and lighting, wouldn’t render until they were about 20 feet from my character. Even with all of the auto-adjust graphical settings turned off, it still felt like it was on at all times.

The rate of leveling doesn’t feel any faster than I remember it being back in 2009. As of the time of this writing, I have leveled up my Gladiator - the mighty Hrothgar - to level 21 and am currently exploring the frozen Morheim Ice Fortress and its surrounding locales. This area was removed in modern Aion, and it’s bittersweet to return to this location. I remember not-so-fondly grinding out ludicrous amounts of time in this area to eventually level up enough to where I could finally travel to The Abyss, which is really where Aion starts getting good - or, at least, where I remember it getting good.

One of the whole gimmicks of Aion is being able to fly around and fight mid-air. Unfortunately, this ability is mostly locked away unless in special areas or in The Abyss, which is an entirely free-flight zone to move around in. I always wished that you could fly around in any area of Aion, and it never made sense to me why this mechanic was almost restricted until these higher level areas. Flight time is limited though, so fighting in the air can oftentimes look like hit-and-run aerial dogfights. The Abyss is a PvPvE contested area where both factions - the Asmodians and the Elyos - fight for control of the region, as well as fortresses strewn around the map.

Unfortunately, playing Aion Classic mostly solo means that leveling up is still a largely slow and arduous process. Thankfully, this whole week everyone has been able to experience Aion Classic’s foux subscription benefit called Siel’s Aura which maintains a 100% experience rate for fighting mobs. This benefit ends after June 30, which means that after the first hour of playtime per day the experience rate gets cut in half - unless I pay up. This is only going to lengthen the time it takes to level up to the max level of 50. In a chat with NCSoft West’s lead producer of Aion Classic, Mike Shreffler said that,”these restrictions are really aimed at limiting bots.” 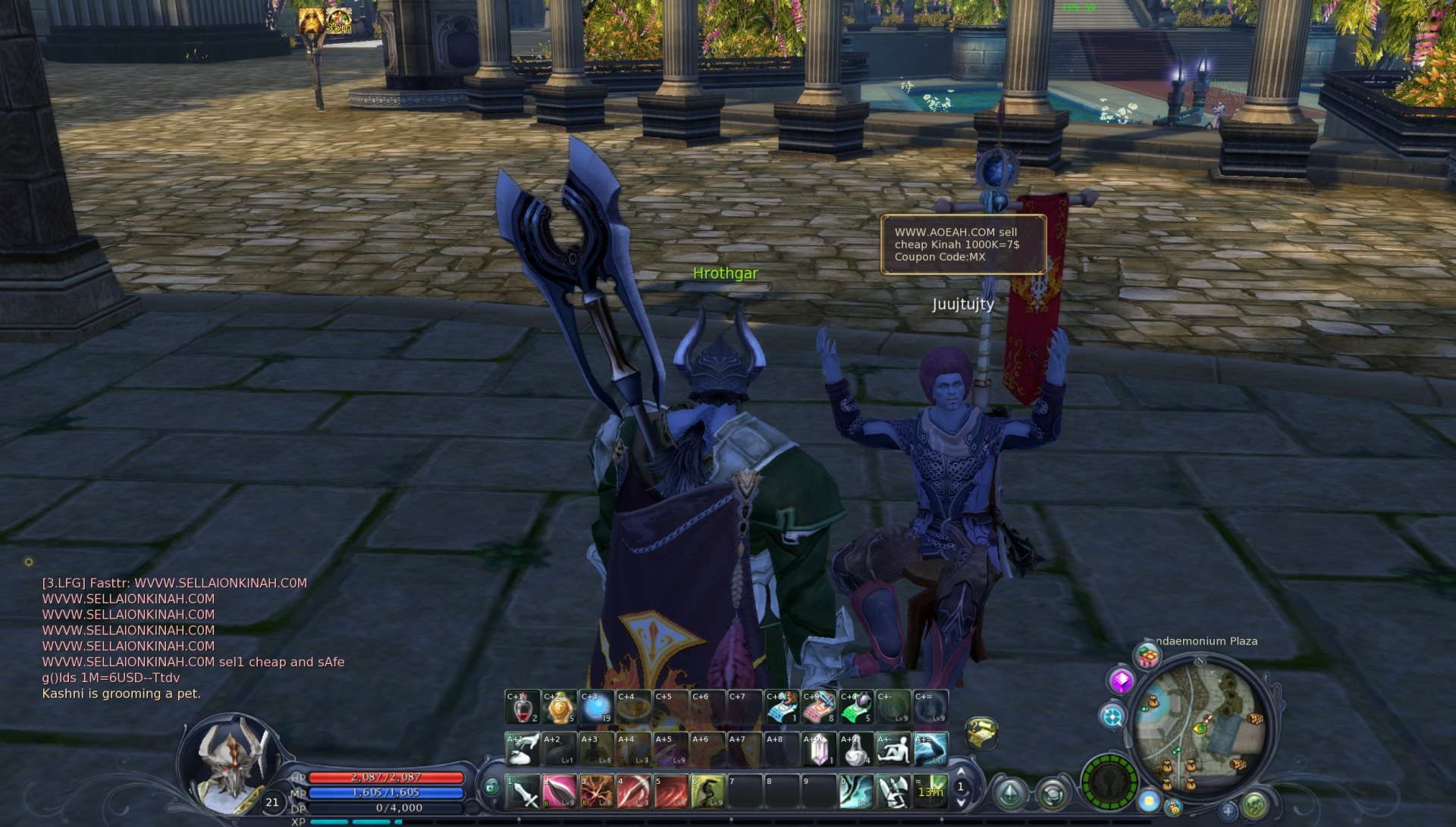 Sorry Mike, but I regret to inform you that Aion Classic is already overrun by bots and gold sellers (or “kinah sellers” I suppose is the correct term for Aion). Walking around the Asmodian capital city of Pandaemonium, I saw several player-stores set up by bot accounts advertising their websites. They’re also in the chat, spamming huge blocks of text with the website and whatever “deal” they’re pushing. I’ve even had one intrepid bot private message me with their advertisement. Reporting them doesn’t seem to do much good, as you can only report them as spamming and there’s not even verification or acknowledgement that the report has gone through.

NCSoft appears to try and cut the middleman out by selling kinah themselves - although in a highly roundabout way. You can purchase their premium currency Quna with real money, which is then used for items in the Quna Shop like cosmetics, name changes, appearance changes, or gender switch tickets. Also available are packs of Pink Tiger Candies which can be sold to vendors for 100,000 kinah a piece. That’s a lot of money, especially at early levels. For $10 you can buy enough candy to sell for 2.4 million kinah. It almost begs the question - why do these bots even exist in Aion Classic? 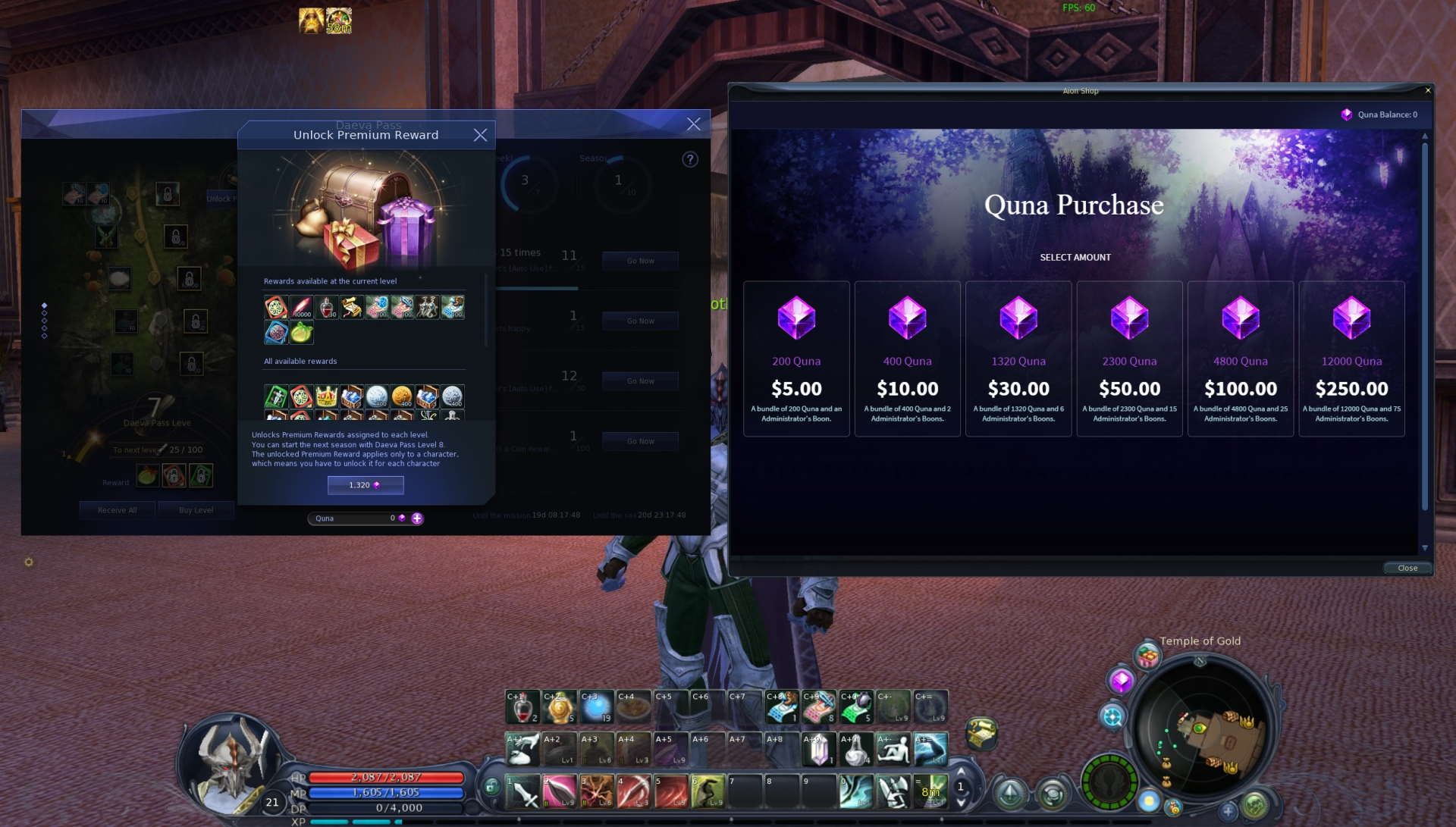 This candy business, in tandem with Aion Classic’s new premium ‘Daeva Pass’, is a really bad look. Essentially, this becomes a circular way to pay-to-win. You can pay money to get candy to sell for kinah to then use at the Trade Broker and buy the best gear available on the market at any given level. This reduces your time-to-kill, which makes grinding and leveling up easier, and also ensures that you are at an advantage when you hit PvP content. The only limit on this is that there is a daily sell limit to NPC vendors, so you can only sell 1 million kinah worth of items per day. Besides that, the candy itself offers an hour-long buff that increases both maximum HP and MP as well as flying and running speeds.

I don’t even want to cover the Daeva Pass, Aion Classic’s take on a battlepass system, because it makes me feel dirty. For the low, low cost of only $30 you can unlock the premium tier rewards for Classic’s four-week long battlepass. That’s right, $30 a month and you can get benefits such as: even more candy to sell, experience buff amulets, consumable scrolls that increase your running speed or attack speed, temporary titles with stat buffs, coins to use towards high-level gear that you won’t have to grind for, and thousands of power shards that make each one of your attacks hit harder. This Daeva Pass, in conjunction with Classic’s “optional” subscription service in order to not be penalized for grinding (in a MMO all about grinding), means that you could pay $45 a month -- for a 12 year old game.

As much as I loved Aion, and honestly am quite enjoying my time so far in Aion Classic despite the grind, I don’t think that I’m going to stick around for long with these kinds of business practices. As soon as the free week of Siel’s Aura stops and experience gets cut in half after the first hour, it’s going to be a struggle to keep players like me motivated to keep playing. It’s already taken me this long to level up, and I haven’t even gotten to the best parts of Aion yet. Starting today, it’s going to take me even longer for me - and any new players - to get there. Stay tuned for my continued adventures next week, and together we’ll see how far I can make it before the grinding grinds to a halt.