Why do we, who still cling to the MMORPG genre with all that we have, play this type of+ game? If this was 20 years ago, many of us would probably answer ‘because playing with others in a persistent world is exciting!’. Since then, the gaming world has changed a lot. I know I know, just call me Captain Obvious. It’s still an important thing to keep in mind.

Playing online isn’t the new kid on the block anymore. Neither are persistent worlds. We communicate with our peers online all the time; perhaps even a little bit too much. Often, we don’t want to communicate with others more than is necessary, since we’re connected 24/7 anyway. This mindset arrived in the MMORPG world years ago, and Star Wars: The Old Republic is a good example of what happens when developers cater to an ever-growing number of gamers who paradoxically don’t care much about the MMO part of the genre’s moniker.

Many people, myself included, treat SW:TOR as a single player RPG first, and as a multiplayer experience second. Almost everything in this game is catering to solo-players. Your NPC companions can tank for you, DPS for you, and heal you too. They can do so better than many players, even. All group quests in the open world can be completed without… a group. The game’s vanilla storylines as well as its expansions are all about you experiencing your story. You’re the centre of the universe. I must admit, I enjoy that the game focuses on my own character fantasy, and still allows me to play alongside others. Even if I don’t group up with other players on any particular days, knowing that they’re out there and playing with me… no, knowing that I could play with them if I wanted to at any point is… soothing. 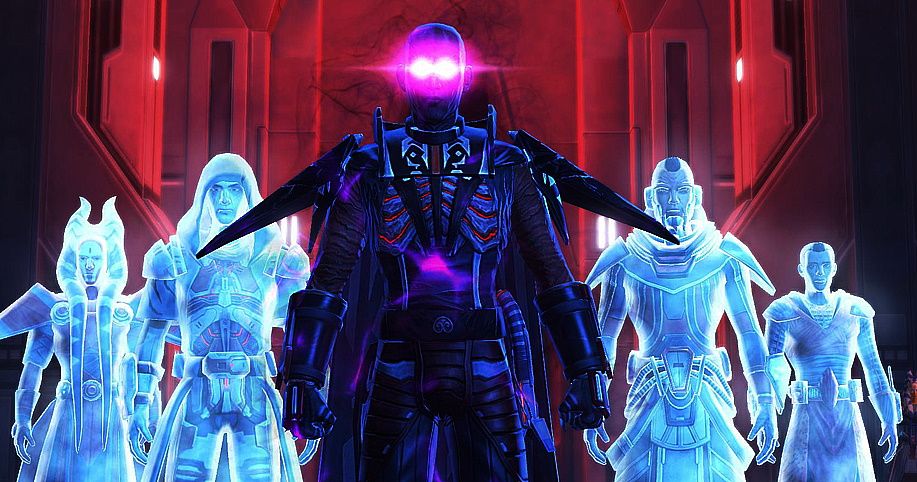 I could understand if you scoffed at me right now, perhaps even called me the reason why our beloved genre is headed in (several) wrong directions. I promise you though, I make use of groups often enough to atone for my sacrilegious preferences! Unfortunately - and I’m deeply sorry if players like me are the cause of this – Bioware went a little bit overboard when they toned the difficulty of much of the game down so that single players could beat all overland content. Somewhere along the road to achievable difficulty levels, someone must’ve said: ‘Okay, lads and lasses. Now pull the difficulty lever aaaaaall the way down. No, not like that. Aaaaaaaall the way. I said aaaaaaall the way.’

And here we are. You can quite literally go afk when fighting a group of mobs, and you won’t die. Your trusty companion will deal with those pesky enemies all on their own, no player input required! On one hand, this is great for people who play games mostly for the story and not the challenge; on the other, removing every challenge from even the single player portion of the game within the context of an MMORPG is perhaps a bit much.

All criticism aside, Bioware’s concept worked. It worked thanks to the foundations they built with their class stories when the game released. After you’ve played two or so of these (I always advise to go for smuggler and sith warrior first), you’re not really that interested in repeating the mob grind anymore. You want to know how your character’s main story progresses. That’s what keeps most people hooked, and that is why there’s only few complaints about the road the devs chose for themselves and their playerbase.

I don’t know how I would feel about this if I were a new player; would I get quickly bored after realising that it doesn’t really matter that much what keys I’m pressing? That no finesse is needed? That rotations are optional? Or would I already be hooked to the setting and stories that I wouldn’t care that much? I honestly couldn’t say. What I can say is that when people do complain about the whole ‘challenge’ situation, it’s almost always about one particular consequence of Bioware’s “you can’t really lose” approach: new players don’t get taught the skills that they need to know if they want to tackle late game group content.

If you don’t have to play your class well to succeed, suddenly being confronted with hard content can be frustrating for all parties involved. Veterans become annoyed that new players don’t know basic mechanics or simply ignore them because they never had to engage with them. Newbies become annoyed because what was enough for many hours of gameplay is suddenly a surefire way to become one with the force. Would the game trust its players to be able to overcome at least a tiny bit of a challenge, it is my conviction that everyone who plays SW:TOR would benefit. After all, we are playing a game; we’re not watching a movie or play a book. If there’s nothing that challenges us, why even engage in an interactive medium?

Anyway, that’s my take on SW:TOR’s challenges, or rather, the lack thereof. Do you agree? Disagree? Have you experienced yourself that you became more of a loner in MMOs as time moved on? Looking forward to your feedback.