Have you heard of this game New World? I’ve been playing it semi-obsessively since its release last week. There are so many things I love about it. But there are a bucket-load of things which I believe Amazon must change to improve the experience across the board.

First up, a quick disclosure. Some of you may know I work for a company owned by Amazon. However, I have absolutely nothing to do with game development. With that bit of transparency out of the way, here are 5 things New World must change to improve the game.

This one is a no-brainer for me. I do not understand how my friends and I can all be grouped together and questing in the same area, yet I cannot share my quests with them so we may all gain XP and progress.

Place this in the, “MMOs have already solved for this,” category. In a game where the social system is arguably its greatest strength, the lack of ability to share quests is truly baffling and seems like an incredible omission. When so much of the questing boils down to, “kill these creatures,” and, “loot these chests,” the inability to perform these tasks as a group can seem for some to be needlessly tedious. Fortunately, games have solved for this already, so Amazon need not reinvent the wheel in this regard. I think a lot of players would want this feature.

As I mentioned above, I believe New World’s greatest strength lies in its social systems. I have described the game to my friends as an approachable EVE Online due to all the scheming, coordinating, and sense of pride we see across the factions and companies.

It seems odd, then, for such a socially minded game to not include player mail. To clarify, New World does have player trading. Each settlement has a trading post which is entirely player-run based on supply and demand for that region. Additionally, you can press H when looking at a nearby player to initiate trade.

But there’s no player mail system. This is a problem because often times my friends and I will be literal kilometers apart. In that time, I may have found loot which doesn’t benefit my build, but does benefit theirs. A player mail system would allow for the instant transferal of that loot and circumvent the need for us to physically meet up in the world. Like quest sharing, put this one squarely in the “MMOs have already solved for this,” category. 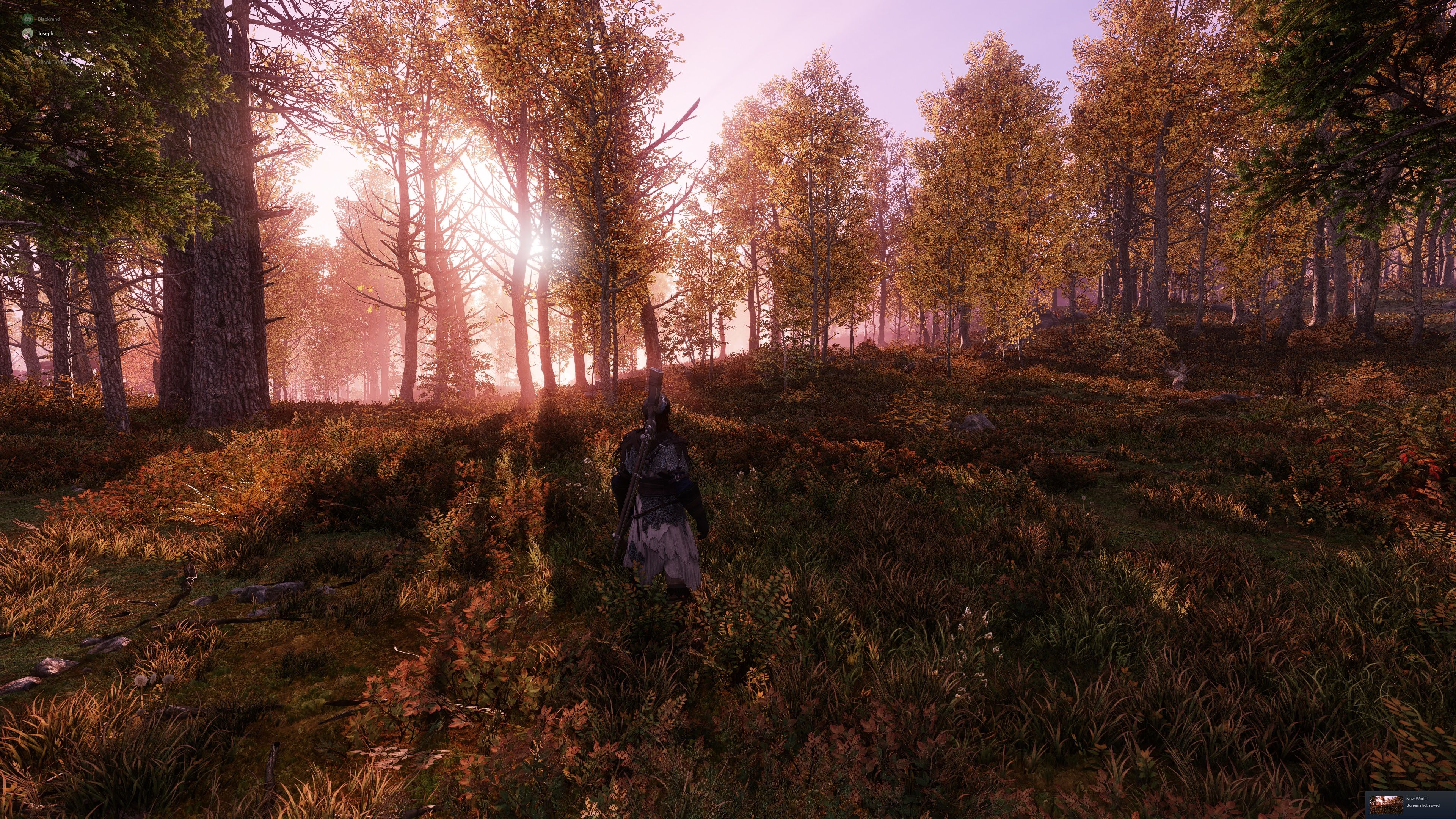 If you’re playing New World, how many times have you been boxed out by other players, preventing you from killing a boss for a quest? In my recent experience, I had to sit and wait for a boss to respawn four times just for me to get close enough to do enough damage to qualify as a kill.

The reason I failed in three of those attempts was due to players simply boxing me out. This physically pushed me away from the boss, preventing me from landing a single blow. In a PvP situation, I think player collision is totally fine. It makes sense for incredibly obvious, “push them back,” reasons.

In a PvE situation, I just don’t understand why player collision needs to exist. We’re just trying to do our quests, man. Player collision in such circumstances need not exist. Again…other MMOs have solved for this.

One of the greatest features of New World is the world itself. Aeternum is beautiful – one of the most beautiful worlds I’ve seen in an MMO. As a natural explorer, I absolutely love running around for miles. Each region feels distinct and has its own unique design language and art direction. It’s stunning.

But every now and again, I want to visit my home settlement for storage management, quest turn-ins, and crafting. Fortunately, New World has a hearthstone recall function which teleports you to the town’s inn. And I believe the cooldown for this recall is too long. It’s currently set for one hour. And given the fetch and kill nature of the quests, you’ll find yourself traveling back to town frequently. I think reducing the cooldown to 30 minutes would be a good compromise so as not to increase tedium while also continuing to encourage exploration. And speaking of exploring… 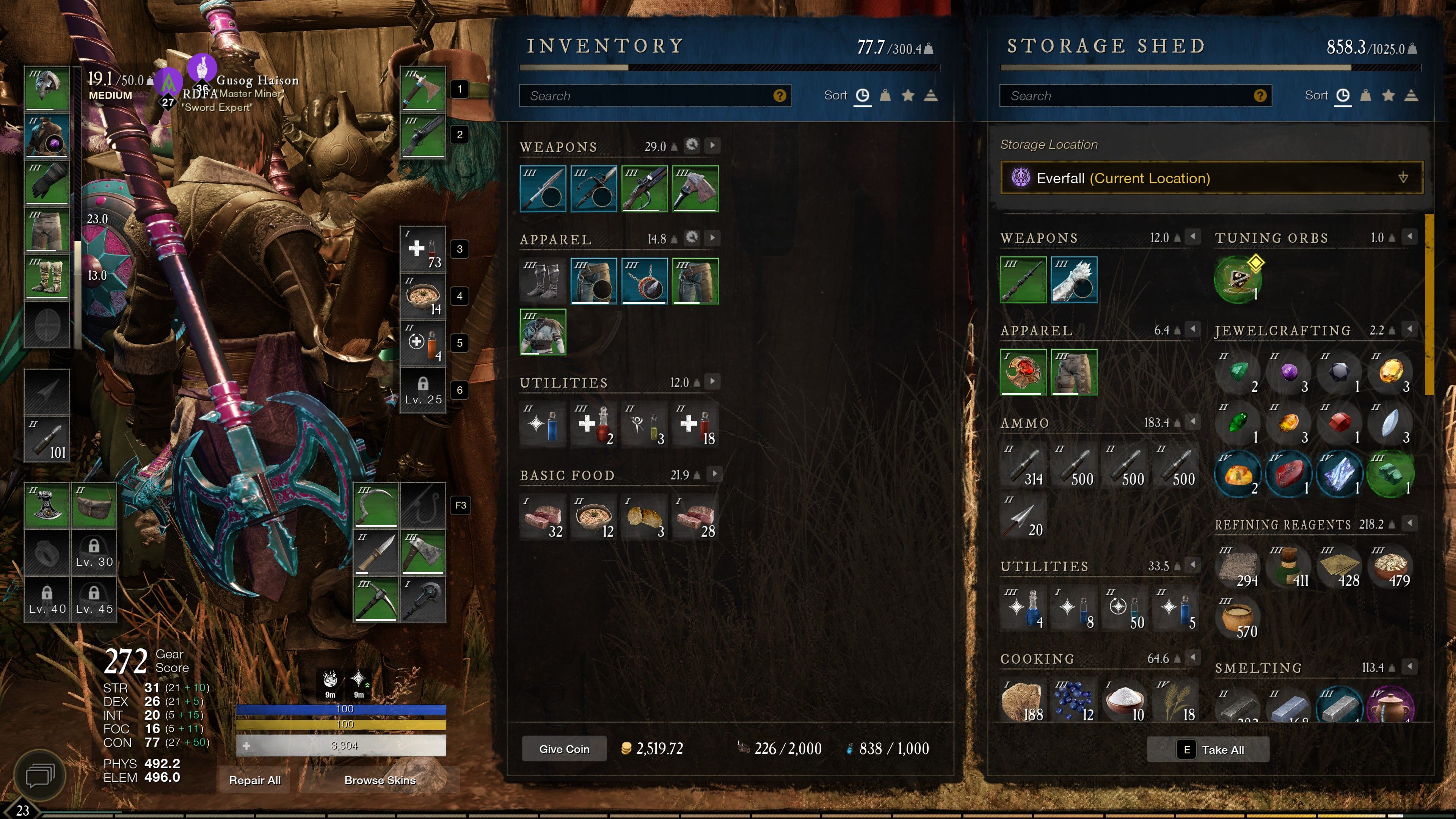 Manage Inventory While Traveling and Gathering

I find myself managing inventory a lot in any RPG. New World seems to be of two minds on this. On one hand, you can check the map while running. This allows you to check faction status, place waypoints, check the location of your quest, and more. Thus, it’s an efficient use of your time.

On the other hand, you cannot manage your inventory while running or gathering. Opening your inventory forces your character to stop running and stand still. In a world populated by overly aggressive mobs with unnaturally long leashes, stopping in the wild to spend 20 seconds managing your inventory presents a real risk.

Allowing you to manage your inventory on the long runs from location to location just seems like an obvious quality of life improvement to me. Using this “down time” to take stock of what I just gathered and looted whilst on the run just seems like a more efficient use of time than forcing me to stop moving. I can already check my map. Let me manage my inventory, too.

In short, I believe New World has tremendous foundations. I provide my feedback to the team here not out of any malice, but from a place of passion. I want to see this game succeed. And I fundamentally believe a large quality of life patch which addresses these changes (and more) can really help elevate New World to the potential I see in its already strong bones. In the meantime, check out our review in progress while you await our final review.