Doom Eternal is the newest title in the series, and it is directly connected to its 2016 predecessor. This first-person shooter has you taking down the elite priests who are helping to bring demons to Earth. Created by id Software, Eternal thrusts you directly into the battle for the survival of the human race. But how does it fare?

You’re dropped right into the action in Doom Eternal, and right away you’re greeted with the sleek, clean and crisp graphics the series has become known for in recent years. From rocks to walls, and every creature in between, everything looked pristine. My review was done on PC (specs below), and it handled like a dream, never dipping below 110 frames per second when playing on at 1440p. 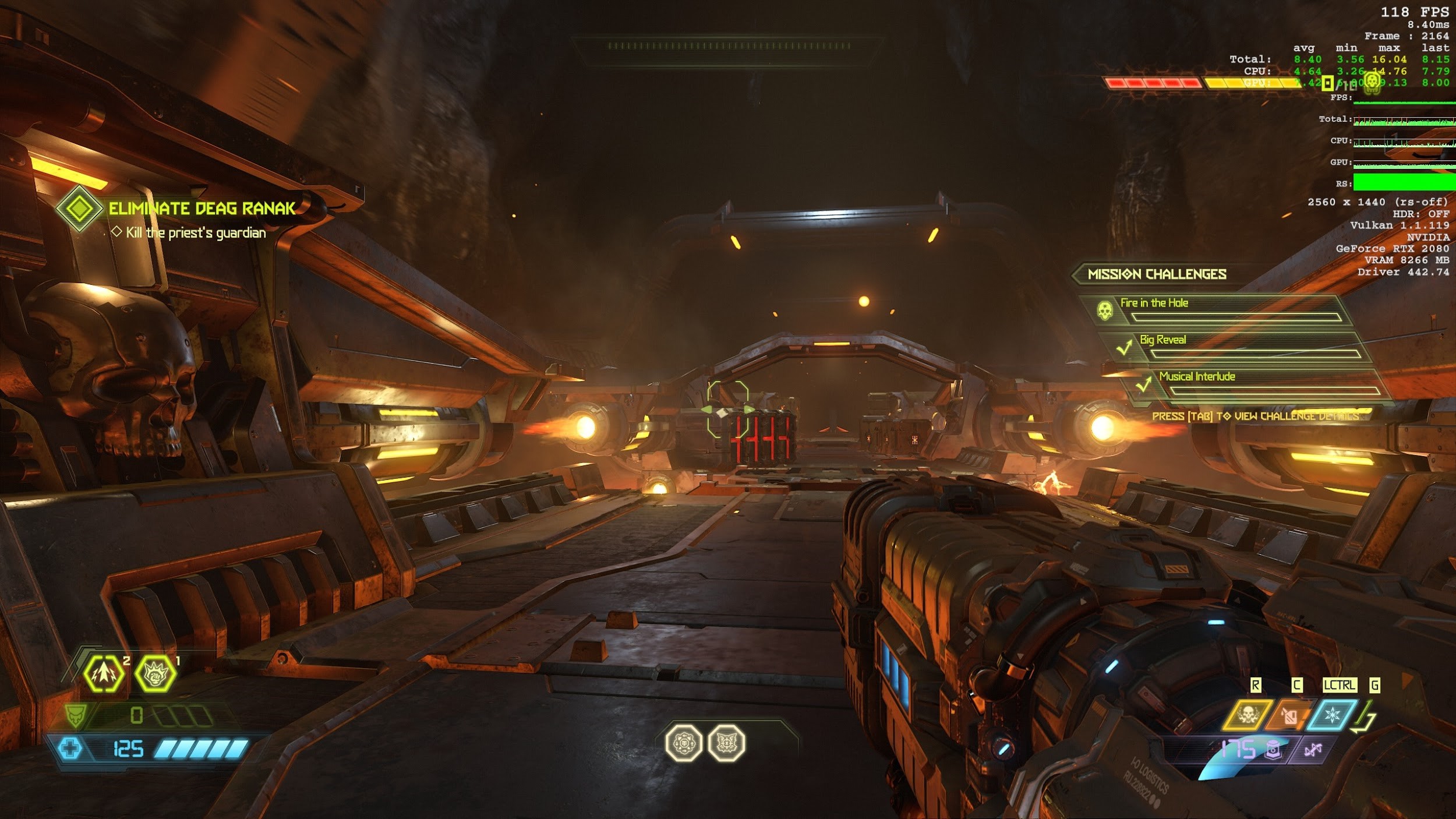 The majority of the storyline takes place on Earth, as you would expect, with some time spent on an orbital station. There, you earn new weapons and upgrades, and, at times, fight demons that are in the prison level. This little break in-between the action is helpful after you have been running for an hour through a difficult level. Playing through Eternal you will notice that you can only walk, until you learn to boost, and then moving about becomes easier. Grabbing ledges, jumping from wall to wall, and boosting will get you into areas that you would otherwise not be able to get to. Your weapons can do you harm as well, so be careful when you launch that grenade or rocket at the enemy.

Switching back and forth between your weapons has a short delay that leaves the slayer open to attacks. It isn’t much to anyone who plays first-person shooters regularly, but enhances the difficulty. Dodging while using your weapons is a good way to fight while strategically running away, but it’s fast-paced enough that I was scared to blink. With enemies jumping, flying, and slithering around at every turn, it’s important to always be on the ball in Doom Eternal.

Another cool thing about weapons is the ability to recharge them with pickups or, by taking your ever-powerful chainsaw to the bodies of your enemies. This is one of the best ways to get ammo, shields, and life back very quickly and it saved my life on many occasions. There is one drawback, however: you can only use the chainsaw when your fuel charge is full. The fuel charge will recover automatically, and you can also find pickups around the map to help you refill the gauge faster, but it does have downtime. The best part of it all is that you start the game with the chainsaw, and if you run out of ammo you can use it to replenish ammo. Be careful, though: the kill animations can be gruesome with arms being cut off and heads being severed.

Overall, combat is tight, frenetic and a lot of fun. It’s one of the most intense shooters of the year and doesn’t pull punches.

This year’s Doom also features online multiplayer, which I’ve largely enjoyed. However, it’s not perfect, as I did encounter some lag stutters and connection issues. Whether this is due to the strain many servers are under right now (many people stuck at home due to the current health concerns) or if they’re struggling for another reason, it can be frustrating but are infrequent enough that they don’t completely ruin the experience.

The multiplayer mode, Battlemode, has two sides: the Slayer and the Demons, where one slayer facers off against two demons in Best of Three matches. It’s a bit of an unfair matchup - fitting for a powerhouse like Doom Guy - since either of two demon players can respawn so long as the other is alive. If you’re the slayer, it’s one death and you’re out. There are five different demons you can choose to play as, with each having separate powers to use in battle and there are also multiple skins you can apply to your slayer. The demons aren’t all easy to play but, with a little practice, any demon can take out the slayer.

Speaking of the battle pass, there are twelve levels to earn with items in everyone. Each level has a different tier of rewards from deluxe, special, and master’s collection. The different tiers can be identified by how rare your cosmetics are.

Battle passes are becoming common, appearing in games that range from Fortnite to Apex Legends and now Doom Eternal. Having grown up in the great age of consoles with Nintendo and Sega, I’m not a big fan of battle passes and get nostalgic for the days when everything just came in the cartridge. That being said, Eternal’s pass has some cool cosmetics for players to unlock and equip for immediate in-game use. Yet another aspect of the battle pass that is very intriguing is the booster screen. Here you can add up to three friends who have Doom Eternal and earn more experience as they play their game. 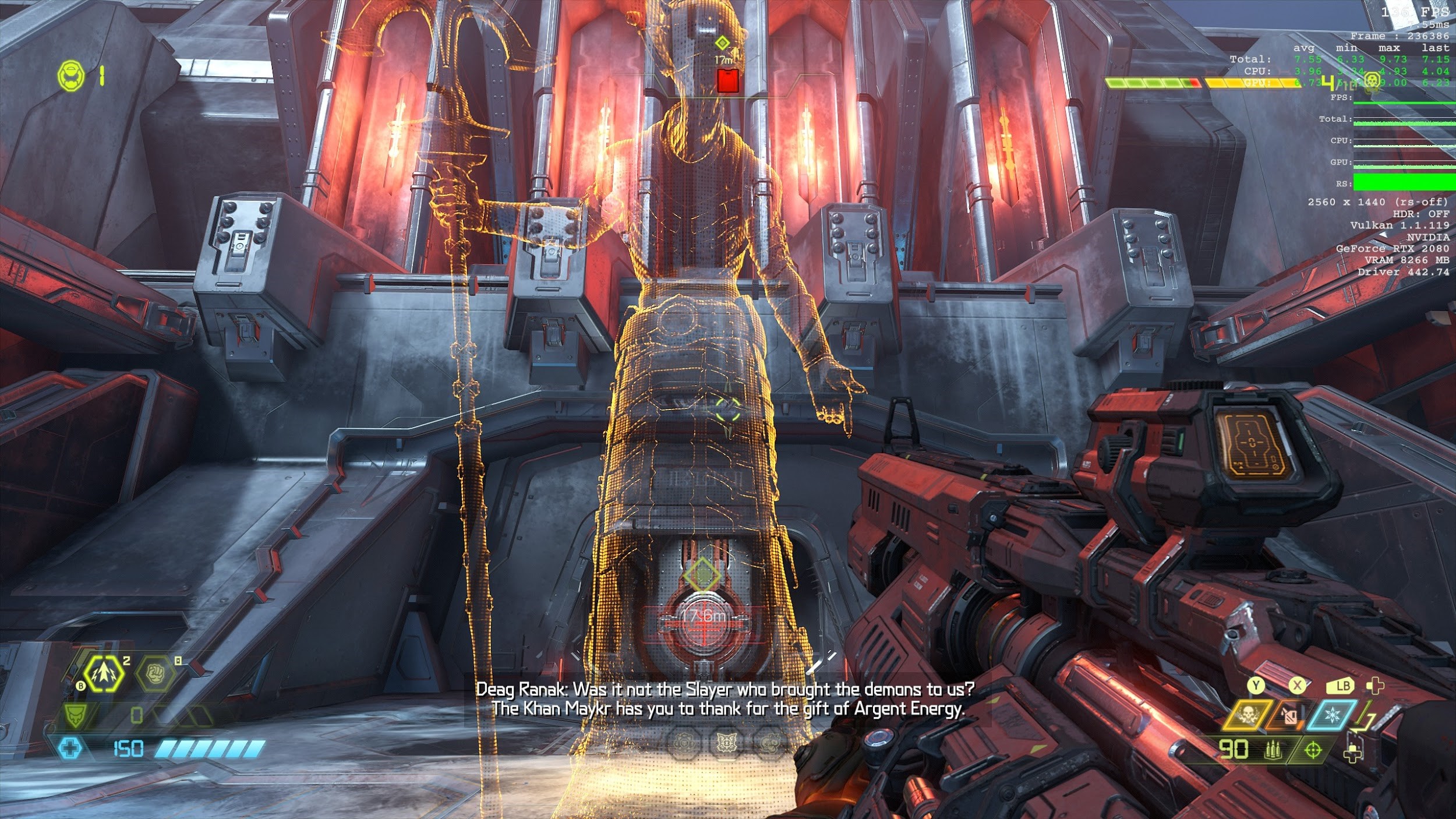 I like the way the leveling system works for weapons and the slayer. For the weapons, there are points where you will upgrade your guns to have two separate attachments each. These attachments can be flipped between in real-time, and offer different benefits depending on what your situation calls for. Each upgrade also has upgrade points to level up the destructive power of that attachment. With your character, different types of skills can be upgraded, but the upgrade also gives a secondary improvement for armor, health, or ammo, depending on which one you select. This is a pretty decent system for leveling up your character.

Changing pace just a little bit, I switched over to Doom 64, which was also provided with the review copy of Doom Eternal. Going back to a game that had only left, right, forward, and backward movement was a big change. No jumping, no looking up and down, and graphics that will make you relive your childhood gaming days; this is a port that takes you back. It works well, but it’s hard to go back to this older style of game after getting used to all of the polish and features of modern AAA games. Still, it is a good play for retro game lovers for sure.

When it comes to first-person shooters, Doom Eternal is one of those games that you can get lost in. The combination of graphics, story, and intense action is enough to keep you playing for hours, pushing for “one more try” after a demon inevitably eats your lunch. In a time when people are grasping for something to occupy their minds, Doom Eternal couldn’t have come at a better time.