Noah’s Heart is an exciting new action RPG from Archosaur Games, the developers of the hit 3D MMORPG Dragon Raja. With an open world design, high quality graphics, and extensive MMO features, learn more about why you should look forward to Noah’s Heart and pre-register today!

Character creation is robust in Noah’s Heart, offering a lot of premade options as well as dozens of sliders so that you can fine tune your appearance - no copy and paste characters here! You first start by selecting your gender, and then you’ll be taken to a quick customize  screen where you can select the height and body fat ratio of your character along with one of several pre-made facial expressions. You’ll then move into more detailed customization that lets you fine tune your character’s face, make-up, hair, body size, and skin color. The options in Noah’s Heart are very extensive, allowing you to really get in depth with your appearance, from the beautiful to the bizarre.

Rather than a traditional class system, Noah’s Heart determines your skills based on your choice of weapon - which is what you have to pick from next after finalizing your glamour. Your options are the Sword and Shield, Lance, Bow, and Dual Blades. We’ll go more in depth on the combat system later, but for now, it’s good to know that your choice in character creation won’t prevent you from changing your mind later on.

Finally, you’ll get a chance to preview some of the game’s outfits on your character (along with hints on how they can be obtained) and actions. Here you’ll also choose the voice of your character based on personality types, and name your character, before entering the world to your first cut-scene.

As you start Noah’s Heart, you’ll be given two control options designed to suit two different styles of play. The first, Action-Adventure, has a smart camera control that automatically adjusts the game’s camera on your character while you play, while giving you precise, manual control over your combat combos. The second, Roleplaying, flips these options - you will be given more control over the game’s camera, but in turn your combat will become a quick auto-combo style, letting you focus more on exploration and less on combat. Both of these modes can be further customized once you’re past the tutorial. 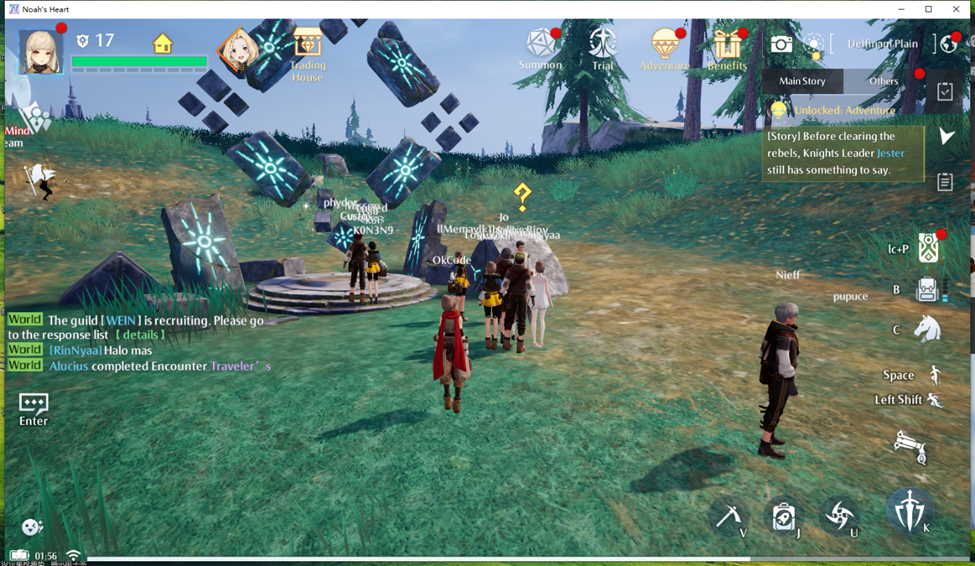 On mobile, you’ll have a non-invasive thumbstick movement control pad on the bottom left of the screen, allowing you to move freely in each area. An auto-navigate feature can also guide you directly to some objectives. Objects and NPCs can be interacted with by directly tapping on them.

The bottom right of the screen includes your combat and movement actions. These initially include jump and dodge/dash, but early on you will also unlock the grappling hook. This ability acts as you’d expect - it lets you ‘grab’ onto nearby environmental objects and accelerates you toward them. Aiming the hook just requires swiping on the screen to adjust your camera and aim toward grappling points.

There’s also a jetpack that you can use to go even longer distances. The jetpack initially rockets you upward into the air, before the jets turn off, allowing you to glide through the air. It’s not a true method of flying, but it’s very useful for travel.

Eventually you can also get a mount. Note that mounts have their own controls and you may want to enable or disable auto pathing depending on what you’re riding. The early game introduces you to taming wild horses, one of the core mounts of the game. You can choose from one of three starting colors. Mounting this horse will introduce you to the taming minigame, in which you must carefully respond to different horse movements with the appropriate actions at a specific time. Succeed at this and the horse will become yours! You can even breed horses, aiming to create the ultimate horse companion for your adventure.

As mentioned earlier, combat in the game is combo-based. The attacks you have at your disposal will depend on the weapon you have equipped – you can also change weapon types without penalty. Using attack skills will deal damage, but also causes monsters to enrage over time. You can also use your movement abilities during combat, which sometimes opens up new combos. Be aware these movement actions take stamina and over-using them can leave you depleted at the wrong moment. Enemies telegraph larger attacks with glowing areas on the ground, so you’ll want to get out of their way before those skills go off.

One of the skills universal to all weapon types is the ‘heavy attack.’ This attack reduces the enrage period of enemies, so it becomes crucial to have ready at the right moment in combat. There’s also a “knockup” ability which allows you to juggle certain enemy types into the air, interrupting their attacks and opening up even more combo opportunities. Eventually you unlock an off-hand weapon – your choice of crossbow or dart – which gives all styles a ranged option that unlocks yet more combo potential. There is an in-game guide which lets you see the combos available for a specific weapon type, so make sure you study.

Overall the combat is really fluid and responsive, especially for a mobile game. Fighting enemies feels meaningful, bosses are challenging, and you’ll always be mentally engaged even when using the auto combat system.

During the opening tutorial of the game you will be given “Ave’s Mirror”. This is a special device given to you by the strange ally, Ave, that you infuse with energy in order to unlock bonus attributes and skills. As you infuse the mirror, it levels up and unlocks further skills, including healing, shielding, movement speed, and stamina restore.

Along your journey you will also encounter Phantoms, special characters often based on real historical figures. This is the game’s summon/gacha feature. Each month Noah’s Heart features a different theme, picking characters from that theme to offer storylines and new summons. Each phantom can be leveled up, increasing their attributes. Over time you can also bond with these characters, so make sure to pay attention to those you’ve allied with!

While phantoms aren’t necessarily playable characters, you can have these characters ‘possess’ you in order to grant you additional skills in combat. This includes powerful skills on cooldown, and even a more ‘ultimate’ style ability in which the phantom briefly takes the field. These characters may also join you during story missions and in dungeons as extra team members.

Noah’s Heart boasts a seamless open world that has an in game map size of 64 million square meters. For perspective, Minecraft worlds on PC are typically about 60 million square meters! This massive landscape spans the entire surface of a planet, which means you can travel in a straight line across the entire world and eventually end up where you started! It also means that there’s practically no end to the exploring you can do to uncover the many secrets that Noah’s Heart holds.

An open world this big wouldn’t be interesting, of course, without diverse areas to explore. Noah’s Heart features many biomes full of wildlife and treasure, from grasslands to icy mountains, deserted wilderness to medieval strongholds, keeping your adventures interesting. There’s even an active weather system. You can go treasure hunting, defeat world bosses, solve mysterious puzzles, and more as you journey.

Noah’s Heart wouldn’t be complete without all the additional dressings of an immersive role playing game. You can count on experiencing an in depth crafting and gathering system if you love making things. This includes activities like fishing, catching insects, and cooking. Like to dress up? The game has fashion features that let you show off your unique style. You can even bond with pets and create your own living space to hang out with friends.

What Are You Waiting For?

Noah’s Heart is a highly anticipated MMORPG built in Unreal Engine 4. With an immense explorable world, real time action combat, Phantoms to befriend, and dozens of activities to take part in, there will be something for everyone. So make sure you pre-register now and we’ll see you in game! Learn more at the game’s official website: https://noahsheart.archosaur.com/