The primary focus of Lands Awakened is on improving and expanding nearly every aspect of Albion's open world. All five of Albion's biomes – steppe, forest, mountains, highlands, and swamp – have been completely reworked with massively improved visuals and all-new layouts, and all fifteen "sub-biomes" now progress dramatically from safer lower-tier zones to deadly higher ones.

On the gameplay side, Lands Awakened brings reworked open-world dungeons with limited-time events and exits in multiple zones, mobs that increase in power and value over time, and dynamically spawning treasure sites that encourage spontaneous skirmishes. The new War Gloves weapon line brings brawler-style gameplay to PvP and PvE fights, and Elite Levels offer an additional 20 mastery levels for dedicated players. Fully reworked Guild Seasons shift the focus away from passive territory control by huge guilds, and instead reward active gameplay by guilds both large and small, and even unaffiliated players. And last but certainly not least, the update brings a huge list of quality-of-life improvements ranging from farming to crafting to party management.

Read on for more details of the Lands Awakened update, or click here to see the official update page. 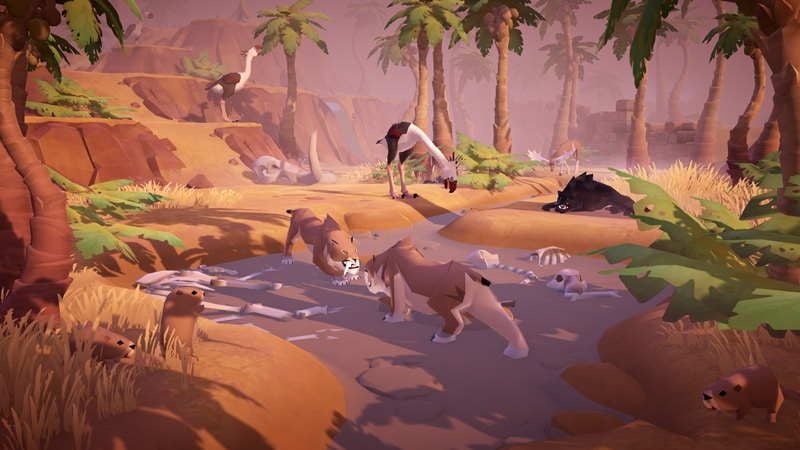 In keeping with its name, Lands Awakened brings an updated and massively improved look and feel to Albion’s gameworld. Each of the game's biomes and sub-biomes has been reworked to create a more diverse and visually enticing environment as players travel through the world, emphasizing the unique characteristics of each environmental zone. Additionally, all layouts have been reworked to be more interesting and immersive, with the terrain features that make each biome type unique – sheer mountain cliffs lined with ice, low winding wetlands in the swamps, shadowy crevasses in the sun-bleached steppe – given new visual emphasis. These zone layout changes are not just visual, however: they also create new strategic choke points, which can be used by everyone from gatherers to small bandit groups to large armies. Finally, the new zone layouts are now easier to read on the minimap and local map, with colors that vary dramatically based on biome type. Taken as a whole, these changes make exploring the open world a more engaging and evocative experience, and bring new life to the vast sandbox world of Albion. 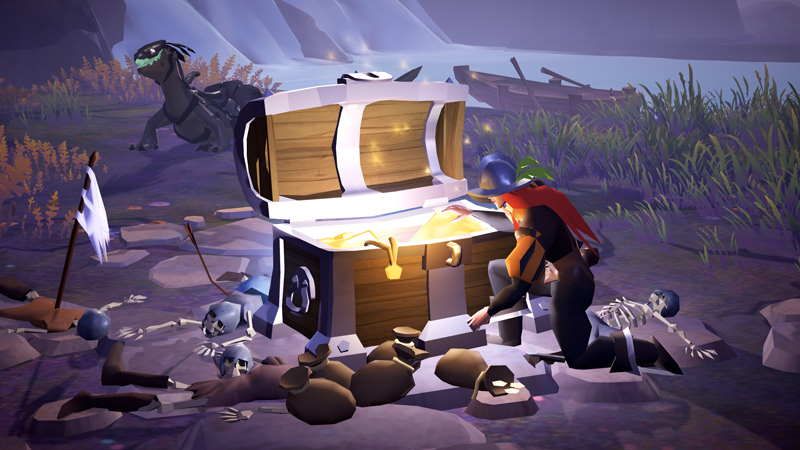 Lands Awakened brings a complete re-envisioning of open-world PvE in Albion Online, offering a huge range of activities for all player types. Mobs throughout the open world now upgrade to increasingly powerful versions the longer they remain alive, offering potentially massive Fame and loot in Albion's lesser-explored regions. For groups, Static Open-World Dungeons have been entirely reworked and expanded to include entrances in multiple zones, and new timed Dungeon Events have been added with huge rewards for those skilled enough to take on swarms of enemy mobs. And new world map overlays now offer additional details about the resources, mobs, and overall value of a given zone.

For PvP players, Lands Awakened introduces a host of new features. Treasures now spawn at unpredictable intervals, with randomized loot values that offer the chance of massive payouts. As treasures are only shown on the map to those in close proximity, solo and small-group players will have a chance to claim them ahead of larger groups. Large, high-tier resource nodes now also follow the new treasure system, spawning at random and viewable only by those nearby, offering new opportunities for gatherers – as well as those looking to steal their valuable resources for themselves. And as part of the full Guild Season rework (more on that below), Power Cores and Energy Crystals now spawn at random in the Outlands, with dynamic unlock times and visibilities based on their power levels. These items can be picked up and carried by unmounted players, offering massive rewards when successfully brought back to a Hideout or Territory, thus creating high-risk, capture-the-flag-style scenarios in Albion's most dangerous zones. 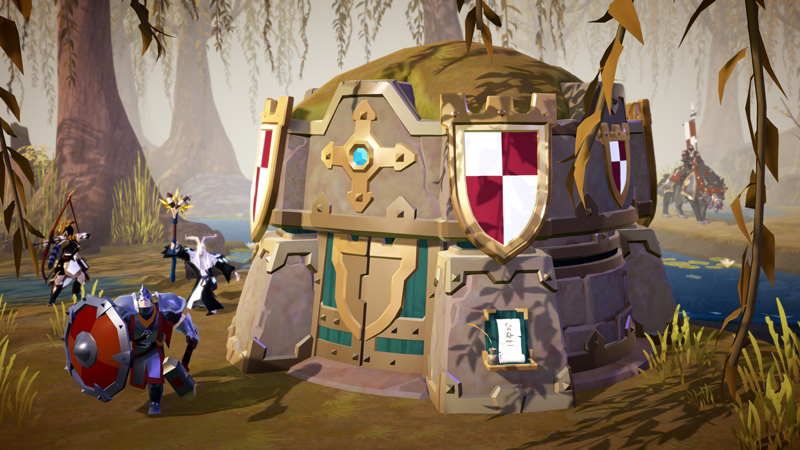 Albion's Guild Seasons have been completely re-envisioned with Lands Awakened. While previously guilds could gather Season Points passively by controlling large numbers of territories, now season progress depends on completing objectives that carry a risk of PvP, and offers both personal and guild-wide rewards to dedicated players. The central system by which this progress is measured is the new Conqueror's Challenge, which runs for the whole season and is open to all players, whether part of a guild or not. By completing a wide variety of objectives, players can earn Might and Favor, which in addition to bringing their own rewards also contribute to their guild's overall Might Levels, bringing yet greater rewards. And the aforementioned Energy Crystals and Power Cores – the former providing essential energy to territories, the latter to Hideouts – further tie a guild's fortunes to open-world exploration and gameplay.

So what are Headquarters? Headquarters Hideouts give every guild who puts in the effort a fair shot at earning a protected base in the Outlands. Based on their performance in the previous or current season, guilds will earn the ability to designate one Outlands Hideout their "Headquarters", making it invulnerable to attack. This invulnerable status doesn't come for free, though: it must be maintained by capturing Hideout Power Cores from the open world and bringing them back safely, while rival groups fight to capture them for themselves during transport.

Overall, the newly restructured Guild Seasons allow smaller and mid-size guilds to gain points in numerous ways, as well as to claim a powerful foothold in Albion's most deadly zones. These sweeping changes come into effect with the next season, which kicks off on Saturday, November 27; for more information, plus links to the full schedule and further discussions, check out this article. 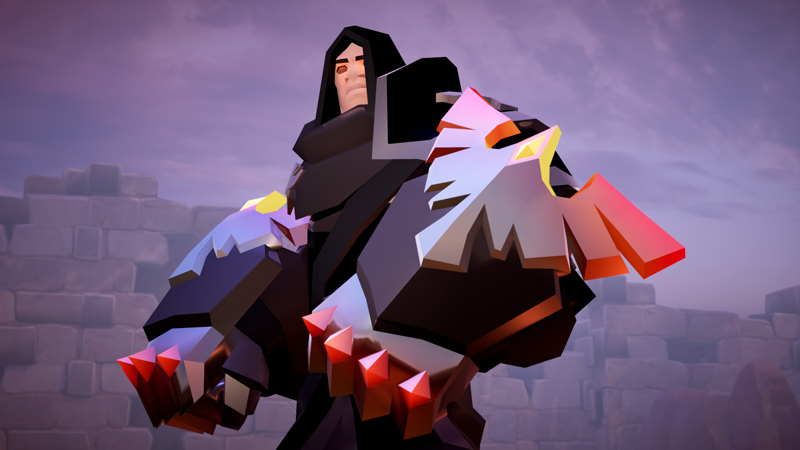 Lands Awakened introduces Albion's first entirely new weapon line since launch: War Gloves. Featuring three new base weapons, four artifact weapons, and fifteen new abilities, War Gloves are a melee-focused weapon with damage, mobility and control abilities along with some limited ranged abilities, and are geared towards keeping an enemy engaged while dealing consistent damage. They can be crafted in the Warrior’s Forge, with Artifacts obtainable as open-world drops or via the Artifact Foundry, and like all weapon lines they feature their own Combat and Crafting masteries on the Destiny Board.

Elite Levels offer high-level players the opportunity to bring their weapons masteries above and beyond the previous Level 100 cap. Players can now see the degree of specialization that they have in a weapon directly on the icon when equipping it in their inventory, as well as when they inspect other players and in kill details, via a small icon that improves in multiple steps as the player advances. Alongside this, the overall Fame progression in the game has been boosted, with approximately 20% increase in Fame across all combat, crafting, gathering, and farming nodes, allowing players to advance through specializations and Elite Levels more efficiently. 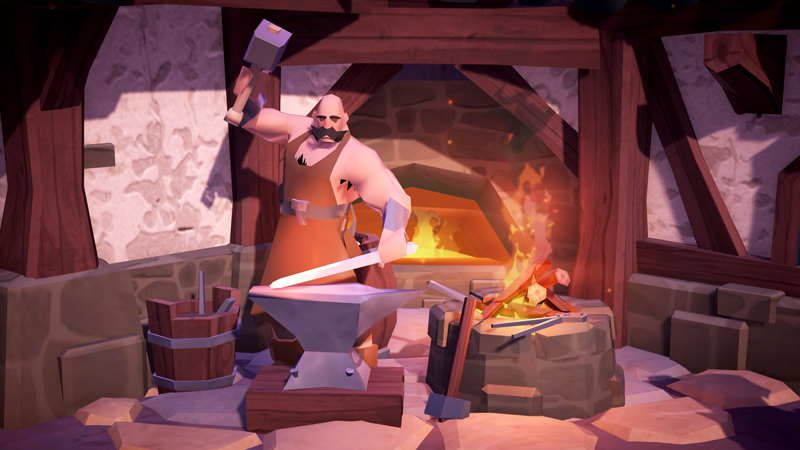 With Lands Awakened, the sonic experience of Albion has been updated and enriched, with numerous newly recorded orchestral tracks that include adaptive combat music, brand new city themes which reflect the characteristics of each Faction, Hideout themes which progress as your Hideout develops, and brand-new music for the Tutorial and Destiny Board.

The update also brings numerous long-requested quality-of-life improvements across a wide range of game systems. Loadouts can now be purchased directly from the Marketplace, providing a means to quickly regear and get back into the game. Farming usability has been streamlined and optimized to tend crops and animals with far fewer clicks, rerolling items is now a more straightforward process, and crafting and refining fees are calculated and displayed more clearly. And as always, the update also includes a huge number of additional improvements, fixes, combat and economic balance changes, and optimizations. 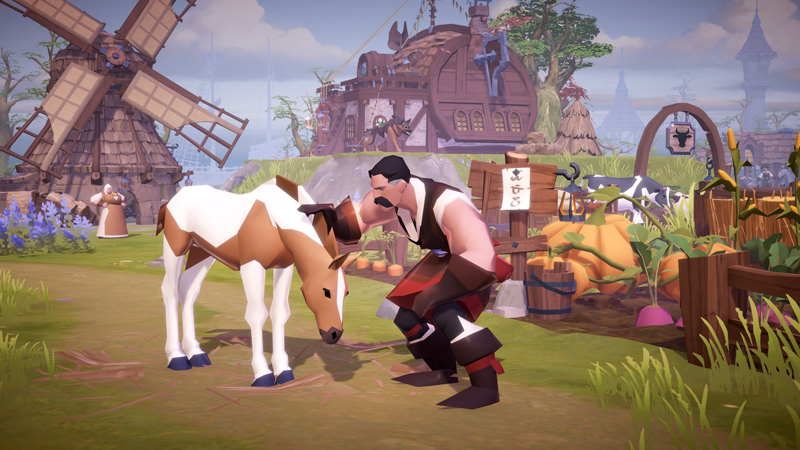 2021 saw a massive increase in Albion's player numbers, starting with the Call to Arms update in March, and then further doubling with the long anticipated official mobile launch in June, setting a staggering new record of 270,000 daily active players. The official Apple App Store and Google Play Store releases fulfilled the Albion team's core goal of offering the full PC experience on mobile devices, which had been envisioned since the game's earliest stages of development.

Albion Online is now a truly cross-platform MMO, offering the full game experience on PC, Mac, Linux, Android, and iOS, with all players on all platforms all playing on a single global server. The game is entirely free to download and play; for all options, check out the official download page.

For a full rundown of everything the Lands Awakened update brings, check out the official update page.