When Blizzard originally announced that unlike Legion and BfA, Shadowlands, the newest expansion for World of Warcraft, would require players to journey through each zone in a specific order, I was disappointed. I enjoyed having the freedom to choose where I would go in my adventures and had looked forward to continuing that way for Shadowlands. The reasoning given for this change was so they could present a complete storyline throughout leveling, rather than having each zone feel only loosely related to each other in the greater expansion storyline.

It was difficult to get a feel for this in Alpha because although we did get Bastion first, the rest of the zone releases were all out of order. I also refrained from playing through the story again in Beta to prevent losing all of the new expansion excitement before it arrived. Now that Shadowlands has been out for almost a week and I have been able to play through the story, I can finally take stock of where this method worked and where it leaves a bit to be desired. As I am talking about story elements, there will be some spoilers ahead.

Shadowlands leveling feels like slowly pulling back the layers of the afterlife onion. Bastion shows us the first layer, the “this is where souls come to let go of their mortal selves and serve a higher purpose” side of the afterlife. In some ways it’s the most obvious imagining of “goodness” in the afterlife. They are only living for the good of others and to fulfill their duty. This isn’t to say Bastion is perfect, but all of that is a different article. However, in addition to introducing us to the anima shortage, we also see our first glimpse of how bad everything is. We see that even those who should be beyond corruption and are meant to be the paragons aren’t safe from the Maw’s influence. In essence, everyone is in danger from this threat. 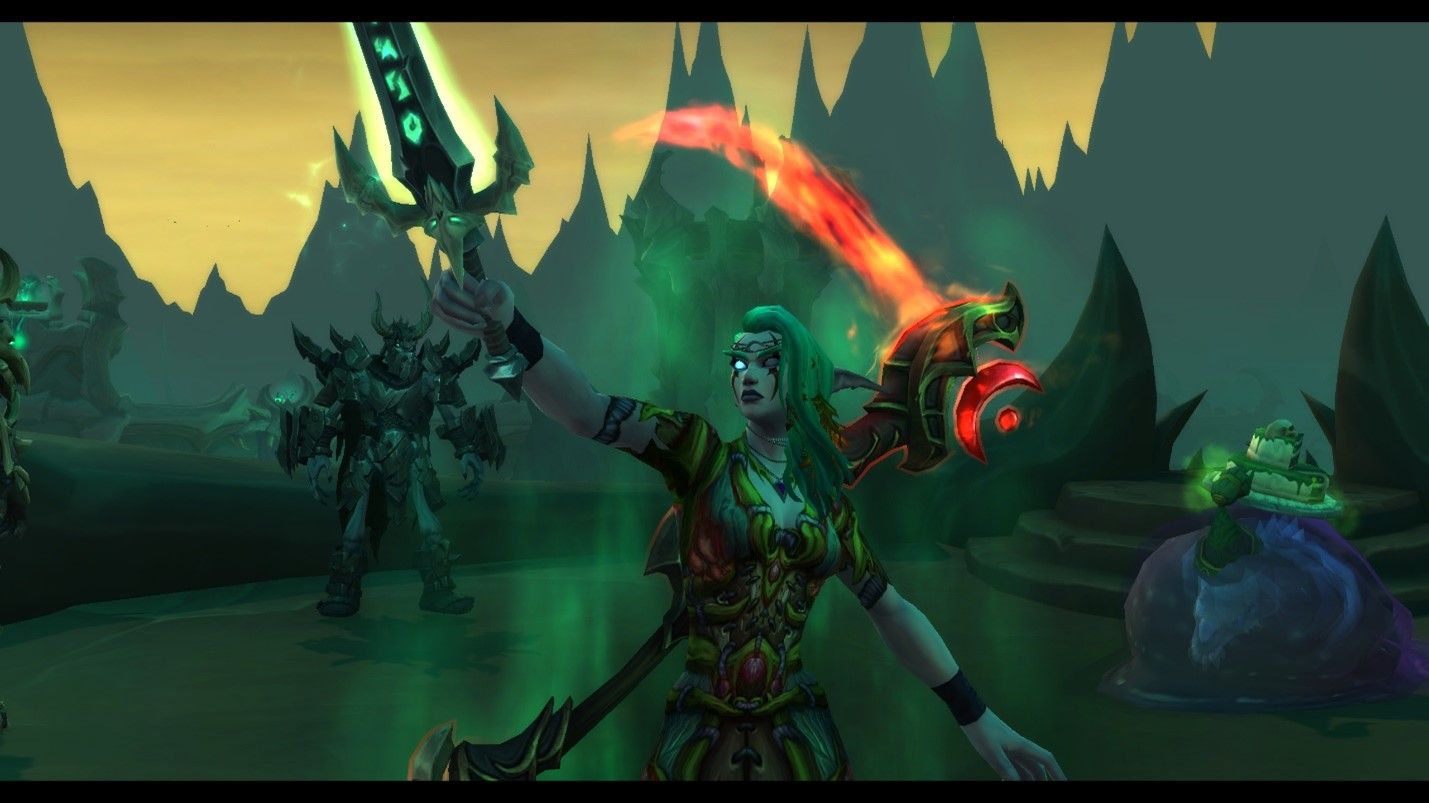 Maldraxxus brings us the next layer showing us not only are there still real fights to be fought after death, but also that the whole issue and imbalance of the Shadowlands has been in play for quite a while. Although some of the bigger plays have just recently gone into motion, there has been a lot leading to the current reality for a while. And the threat is so dire, the Primus of Maldraxxus thought to leave behind a dire warning of what he feared was coming. Prior to that, we had heard of the Jailer but didn’t know much about him beyond “Sylvanas is working with him and he seems to enjoy torturing souls.” Learning he’s an ancient evil meant to be trapped in the Maw did up the stakes a bit.

Ardenweald taught us the afterlife isn’t all about working at your task forever; some souls are nurtured and can even be reborn into their worlds. We also learned one terrible cost of the anima shortage has been the need to sacrifice some of these souls who might have otherwise lived on again. There’s also something about the Drust invading Ardenweald, but no one seems to know how that’s possible or what they are trying to accomplish. Additionally, the Drust seemed to be corrupting the various Fae they came into contact with, which is a bit different than how the Fallen seemed to operate in Bastion. 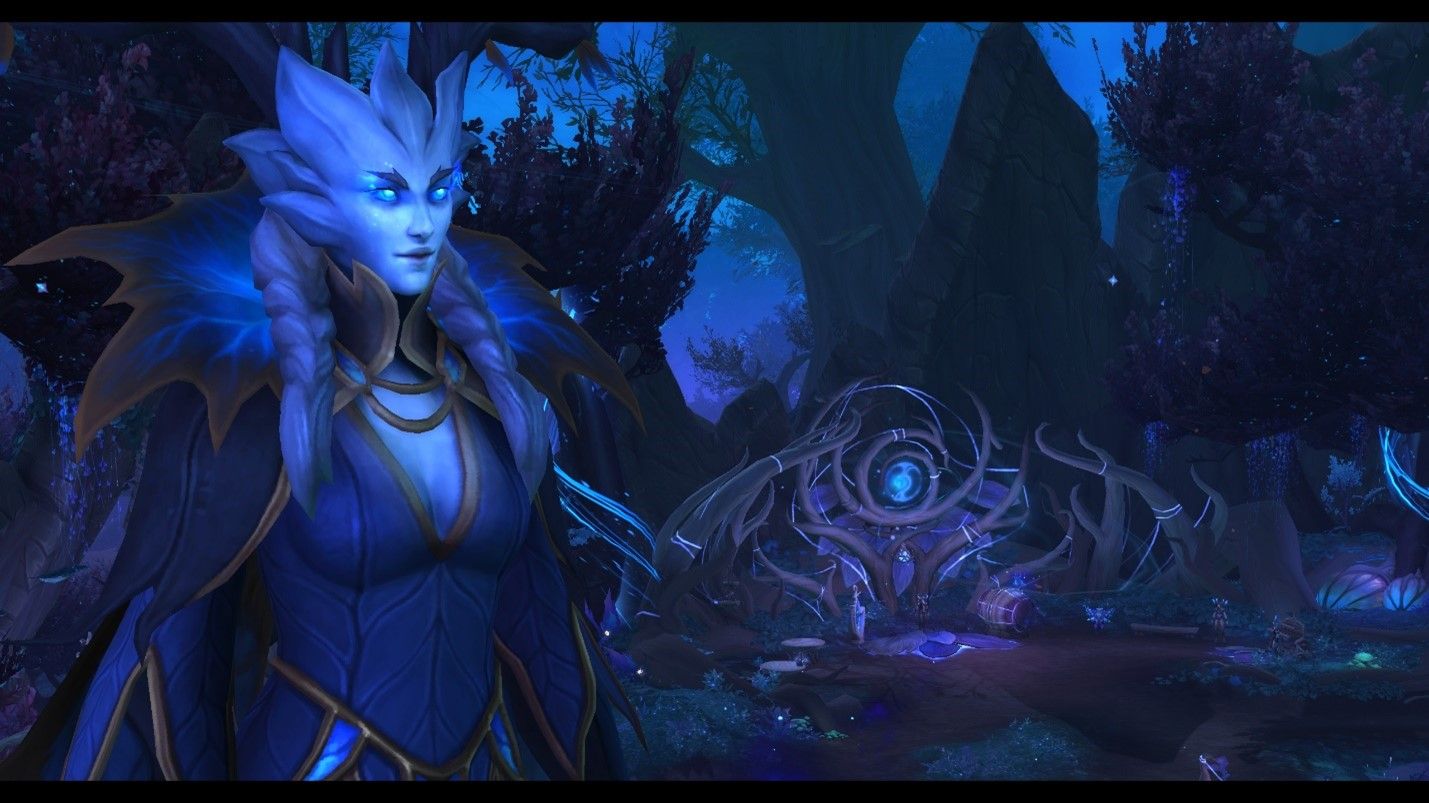 Another aspect of Ardenweald, which is interesting, is we meet spirits who were traumatized by their experiences while living. The Kyrian in Bastion only really seemed to struggle with letting go of their mortal selves more than they were still dealing with the after-effects of what happened to them during their lives. Although some past activities are brought up in Maldraxxus, no one there really seemed to struggle to deal with what happened to them. However, in Ardenweald, we meet two characters in particular who have trouble dealing with everything which happened to them while alive. Having the opportunity to see how each dealt with things, and the effect their struggles had on those around them, added another interesting aspect to the afterlife.

The last zone we visit in the storyline is Revendreth, where we learn the afterlife isn’t only for those who did good throughout their life. Even people who committed terrible atrocities in their life could come to terms with their past actions and either become a Venthyr or move on to one of the other covenants. Which is an interesting concept when it comes to them moving on and potentially going to Bastion, both because they are expected to always carry out their duty selflessly but to also completely let go of their past selves. Each option has intriguing lines of thought to them. I wonder if the repentant souls decide where they go or if they go back to the Arbiter who then judges where they should go now that they repented? 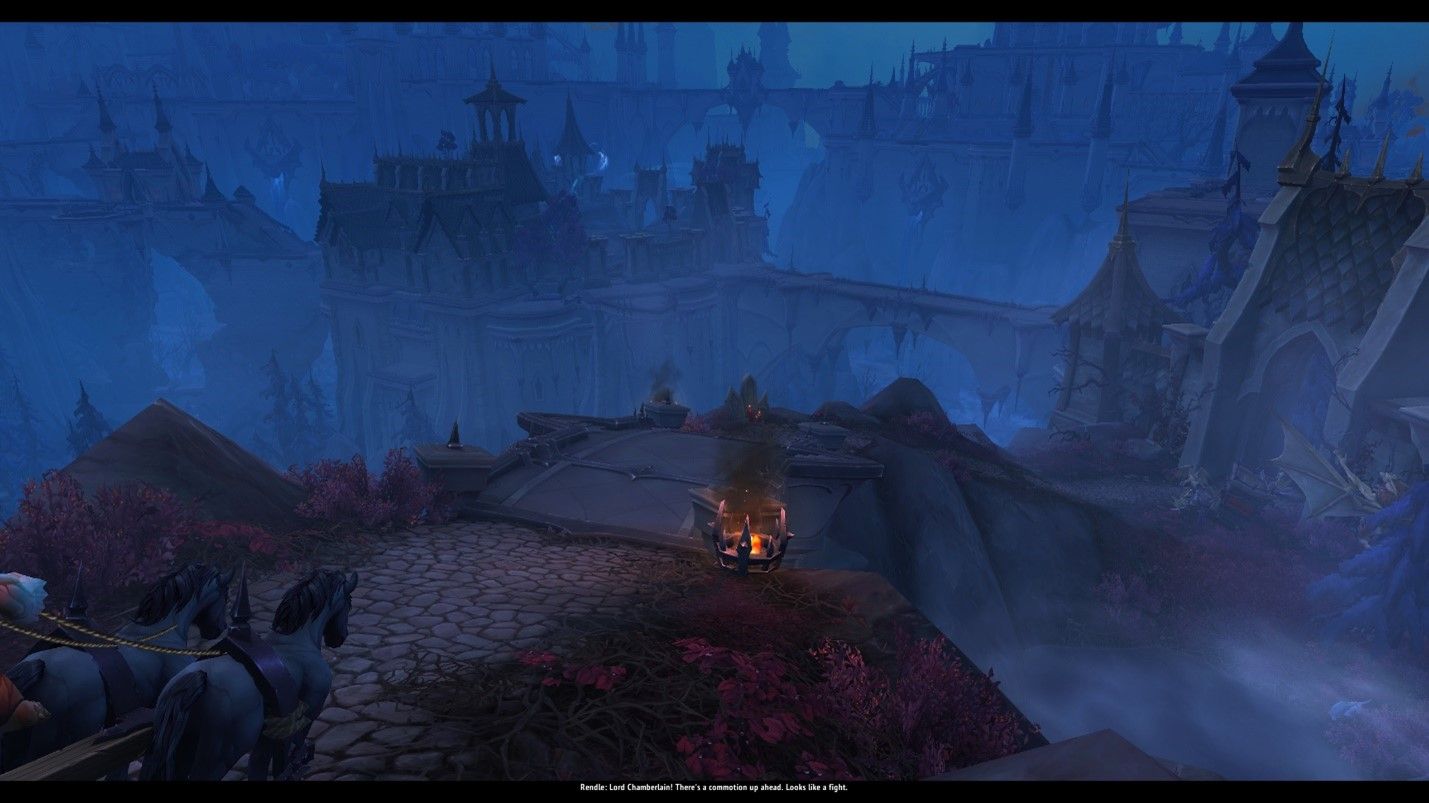 Despite the storylines flowing into each other, I’m not sure anything would have been lost by playing them in a different order. Sure we are propelled to go to Ardenweald to deliver the message from the Primus, but we don’t go back to let the people in Bastion know… which if it’s such an important message for everyone to know seems odd. Would it have been any weirder to have played through Maldraxxus last and just brought that message back to Oribos? Plus, after each zone’s storyline, we go back to Oribos to open the way, so it wouldn’t have been that much weirder just to let us pick. Sure, it makes sense to progress in the order we did, but it also wouldn’t have broken anything to mix it up.

With Shadowlands, Blizzard was trying to compromise on the storytelling a bit. They wanted to tell a more linear story so the overarching story could be more in-depth right from the start instead of separate storylines, which eventually come together. Simultaneously, they tried to make a storyline that would still work when players took alts through because they wanted to allow that flexibility. This is why there is some direct direction to move us through the story, but also, nothing is broken by doing it all in a different order. 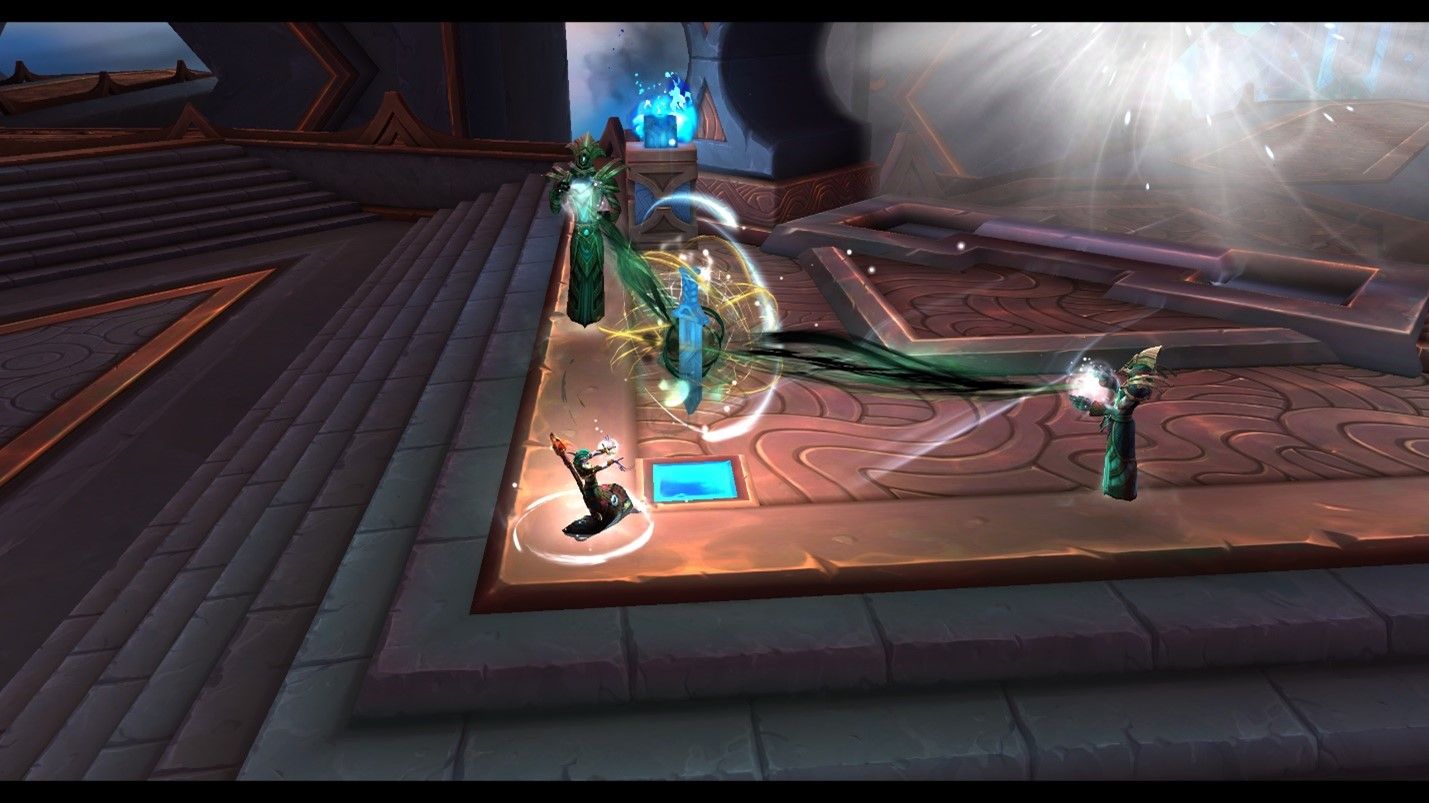 All of that said, I have enjoyed the storytelling in this expansion and especially all the VO on everything. As someone who enjoys not just the broad storytelling but also a lot of the “smaller” character stories Shadowlands has delivered a great experience. I also really love how cinematics are featured more, but it doesn’t feel like my player agency is taken away. I’m not sure how I feel about some of Afterlives being incorporated into the game, though. On the one hand, it’s awesome for players who don’t want to get lore information outside of WoW and wouldn’t have seen them before. On the other hand, they felt a bit out of place. They are in such a different style than the rest of the game; it felt weird.

The leveling experience of Shadowlands is also highlighting an issue WoW has had for quite a while because players have to finish the story campaign before they can start on the main max level activity of Covenant Campaigns. I understand this restriction's logic; it makes a lot of sense for players to understand the base storyline before delving into the more focused covenant stories. However, this brings the problem of how much content players choose to partake in while leveling to the forefront a bit. In both Legion and BfA, I hit max level well before I finished the final leveling zone. In fact, I’m pretty sure I wasn’t even halfway through Tiragarde Sound before I hit max level. I mostly remember this because I had to go back there to finish the story and unlock the Siege of Boralus dungeon. 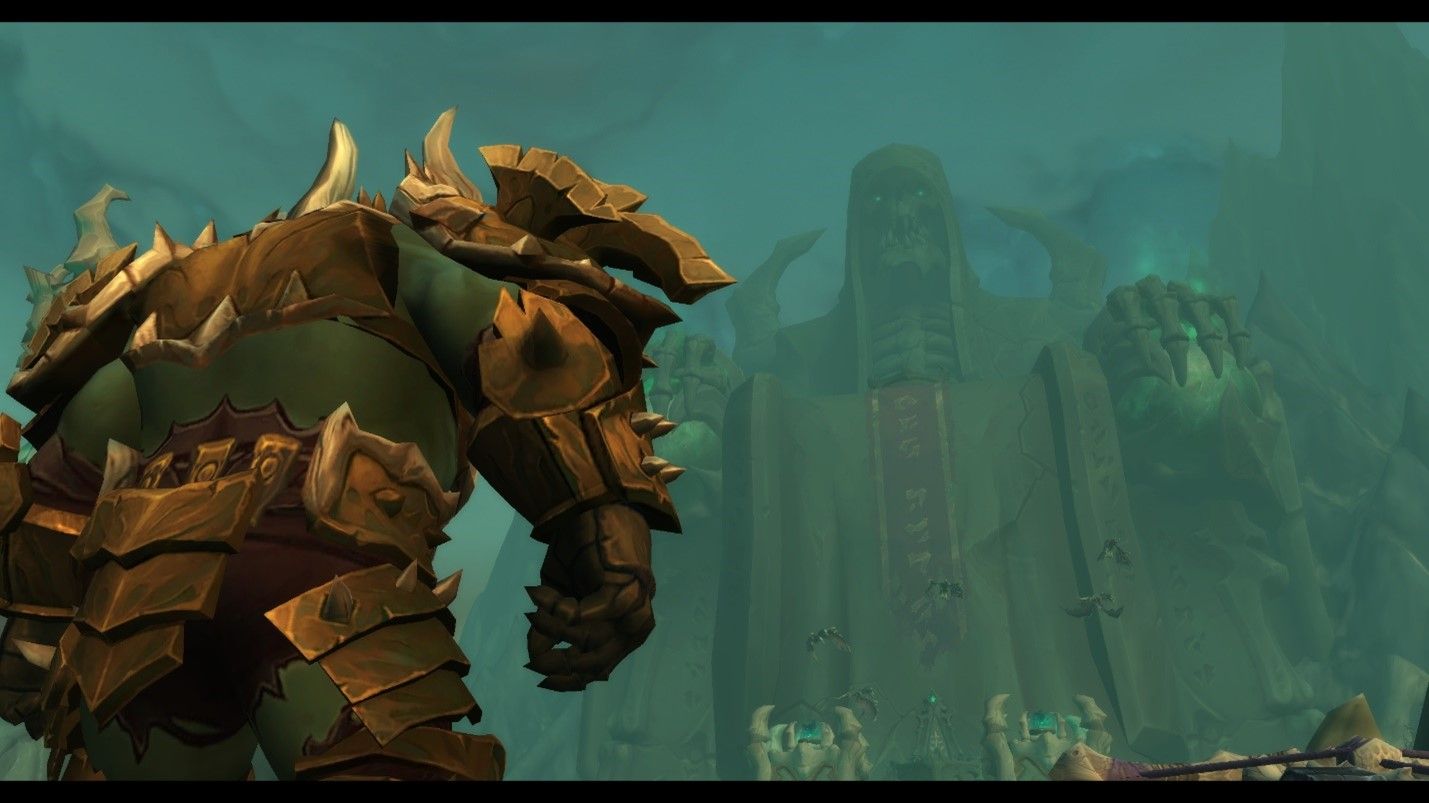 I’ve always been the type of player to pick-up every single quest I come across because although often they are simple quests with no real impact on anything, sometimes they are extremely amusing or offer surprising and interesting lore insights. I also tend to do most dungeons as they come up in the storyline, and then often friends will need them after I’ve done them, so I’ll go back a few times. So, hitting max level before finishing the story has been the norm for me. In general, this hasn’t been an issue, though, because it meant I could start on the max level content to get ready for raiding and finish the story on my own time. For some players, that might have been annoying, but for me, it worked well.

Shadowlands is a bit different. To pick my covenant and get the questline to open up the Maw and Torghast (which is a huge part of getting raid ready), I have to finish the story campaign. I know it’s intended to make sure players fully grasp who each covenant is and what they stand for, but for players like myself, it can feel a bit punitive. This effect can be further exaggerated depending on what race a character is as well. For example, Pandaren earn rested experience faster, so they’ll require even less content to level (assuming the player is taking breaks from playing and not leveling all in one shot). 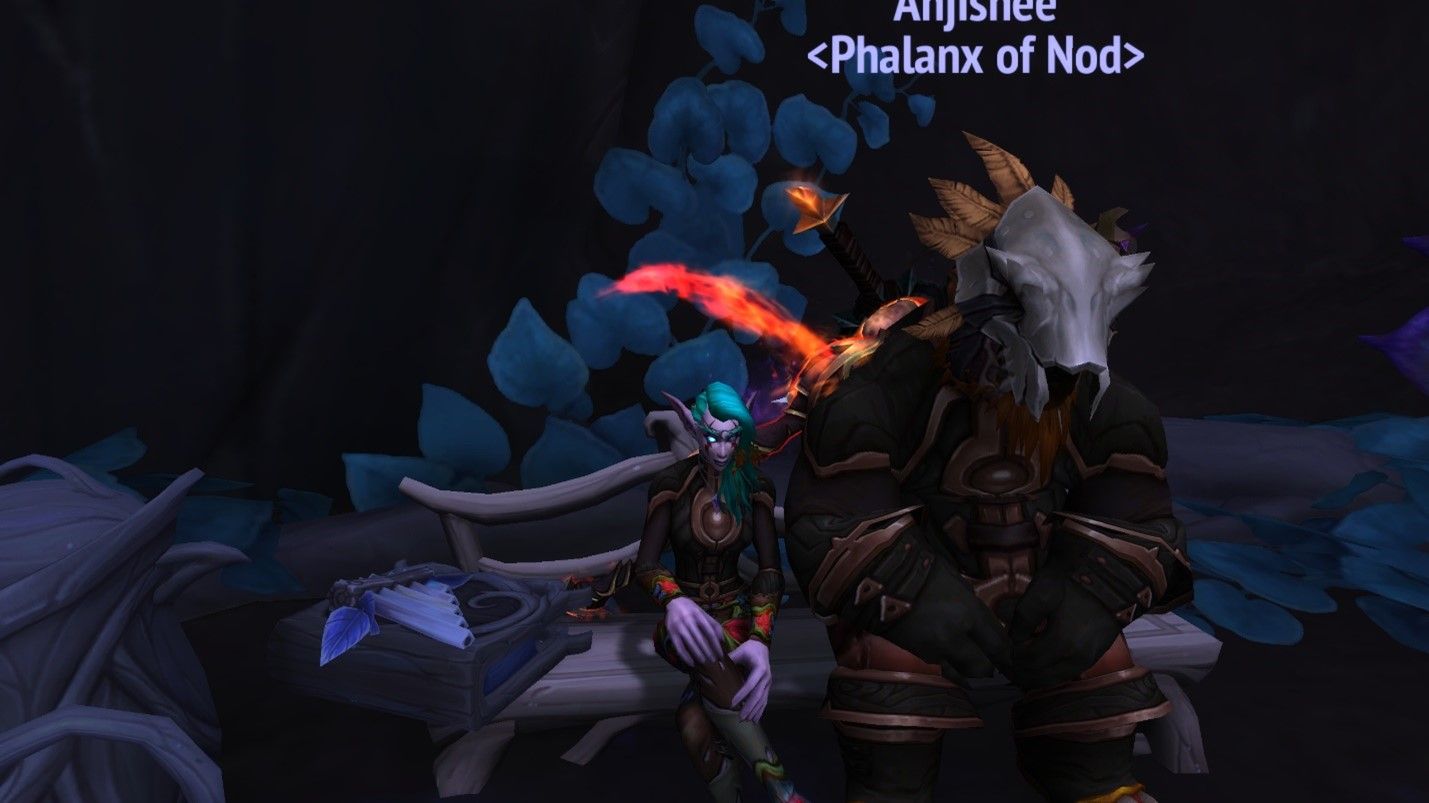 I’m not sure what a good solution would be, though. Everyone shouldn’t be forced to do every quest there is and every dungeon multiple times to reach max level. I believe players should be able to hit max level just from doing the story campaign quests alone. Plenty of people don’t enjoy doing side quests and running multiple dungeons and there’s no real reason they should be forced to play that way if they don’t want to. However, the current system leaves other players feeling like they are being held back because they chose to do more of the content available. Maybe side quests should move towards being sources of various cosmetic items instead of giving experience? I know some people who do them now might stop in that case, but having experience as a reward for everything with the way Shadowlands is set, seems to be causing extra issues.

I do appreciate the fact that when I get around to leveling my alts, I will have a lot more flexibility in what I do. Plus, being able to choose a covenant right away and work on all of that will be a giant help. However, in some ways, Shadowlands feels a bit like too many compromises were made to give every group what they wanted. The result is the storytelling isn’t as solid as it could be and some players feel held back because they chose to do a bit more. There is a balancing act to be sure, but it feels a bit off-kilter so far.