With the addition of Maldraxxus, all of the Shadowlands leveling zones are playable on the Alpha. We also know for sure the order we’ll be visiting these zones is Bastion, Maldraxxus, Ardenweald, and then Revendreth. The intro scenario which gets us to Shadowlands was also added in the last round of updates, so of course, I spent time on that as well. Let’s hop right in with a look at Maldraxxus!

With all three of the other zones, there was something about each of them that drew me in and made me excited to step foot into them. Bastion had its light-infused beauty, which made me want to explore everywhere, Revendreth exudes a copious amount of gothic horror which I can’t resist, and Ardenweald is a nature realm which immediately felt like home. When it comes to Maldraxxus, though, it just seemed to be all about death and fighting without any of the gothic charm, which makes Revendreth appealing. 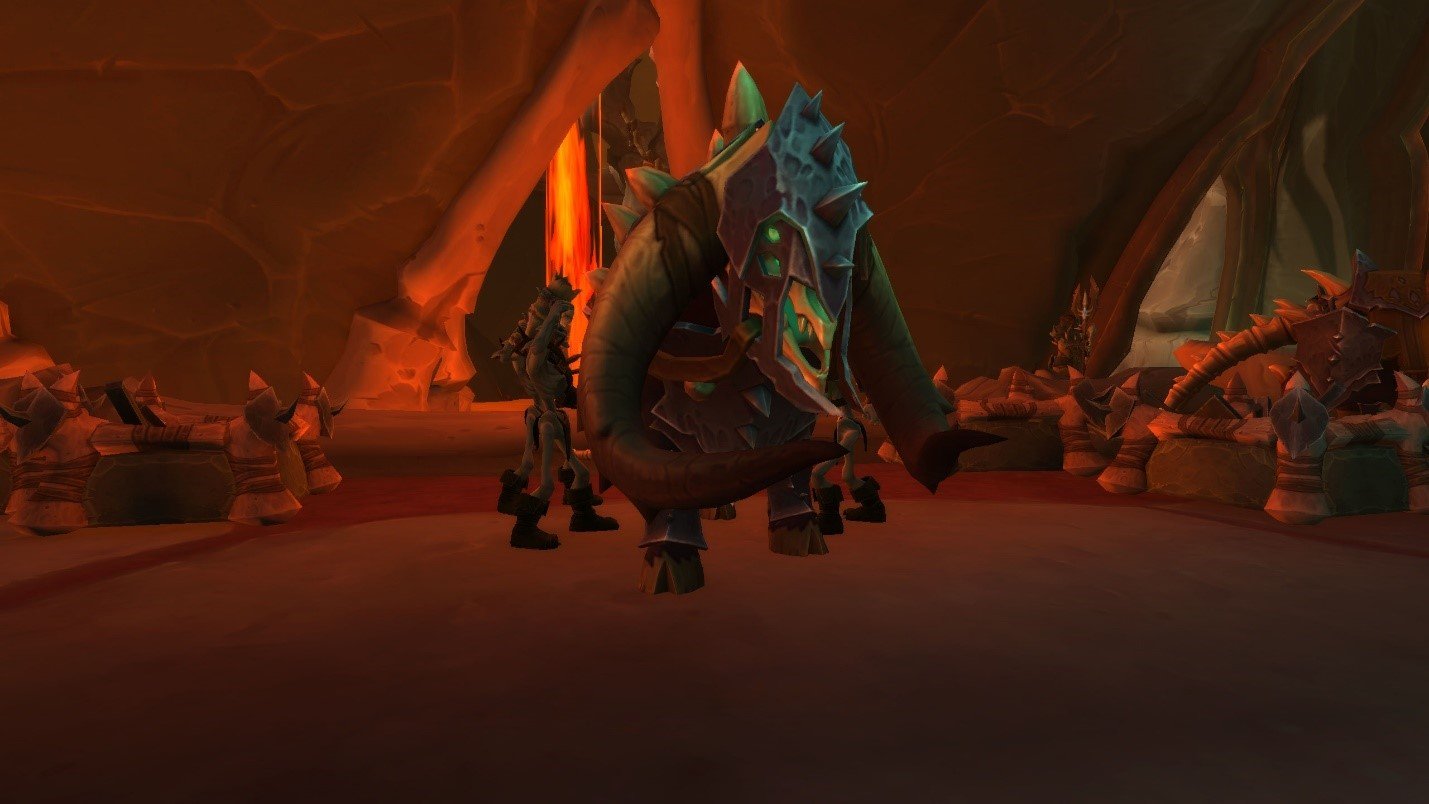 However, I enjoyed the storyline quite a bit. Without too many spoilers, Maldraxxus is the military might of the Shadowlands, but it isn’t wholly focused on raw power to be strong in battles. Everyone who gets sent to Maldraxxus is sorted into one of five houses, and each house has a different specialty, which, when all the houses work together, allows Maldraxxus to field a powerful fighting force. Of course, there’s competition between the houses, and everyone is sure their house is the best, but that comes with the territory of this type of setup.

Unfortunately, two of the five houses were destroyed before we arrive in Maldraxxus, and what’s interesting about that is the house we end up helping has assumptions about what happened to the other two houses. Still, they don’t know for sure what happened. As a result of this, the questline took me through an investigation of what happened to the two broken houses. This was interesting because it gave some scope to how long things have been amiss in the Shadowlands. Also, the structure of how everything works in Maldraxxus is very different than with the other zones. Revendreth comes a bit close to having a similar structure, but it’s still somewhat different. 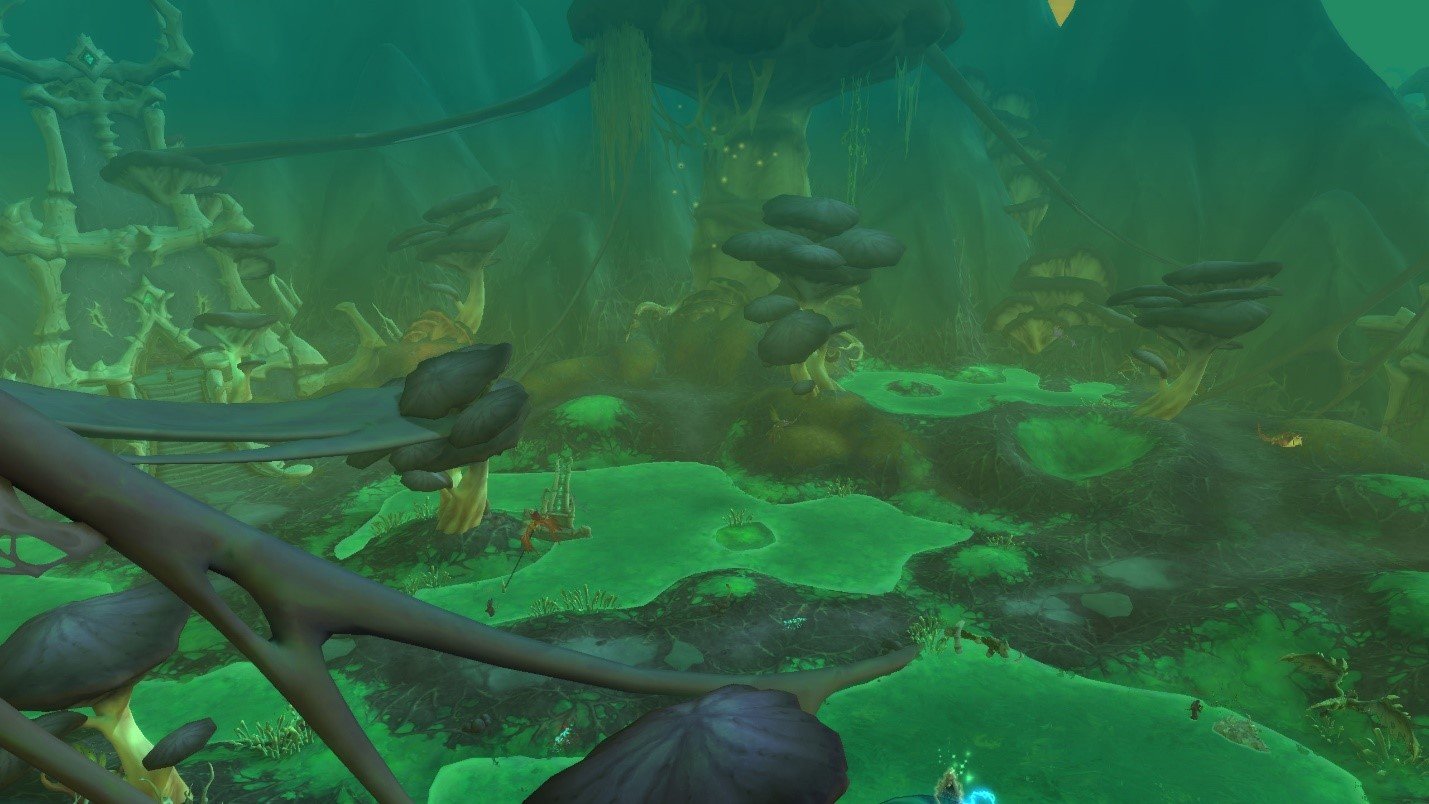 There also seems to have been a prophecy of some hero who would come and save the Shadowlands, which was foretold by the Primus. Sadly, the Primus has been missing for quite a while, and we seem to have stumbled into a bid for control of Maldraxxus. Of course, we turn the tide and help the cause of one of the houses above the others. I like that this zone doesn’t entirely follow the same flow as the other zones, but I’m not sure it is different enough to keep the whole “we arrive in a new zone, need to see the leader, but oh look there’s a big problem in the zone we have to solve first” from getting boring. Maybe playing the zones consecutively will help with that some, but I don’t think that’s likely.

One thing which surprised me about Maldraxxus, though, is there is a lot more variety in the scenery than I expected. Sure, everything is all death and decay, but there’s a lot of variations on that theme. Each house’s area is unique to them and reflects the values they hold too. All without wandering into gothic territory, because you know that’s Revendreth’s whole thing. Ardenweald is still, without a doubt, the most beautiful zone, but Maldraxxus has its beauty in a very different way. 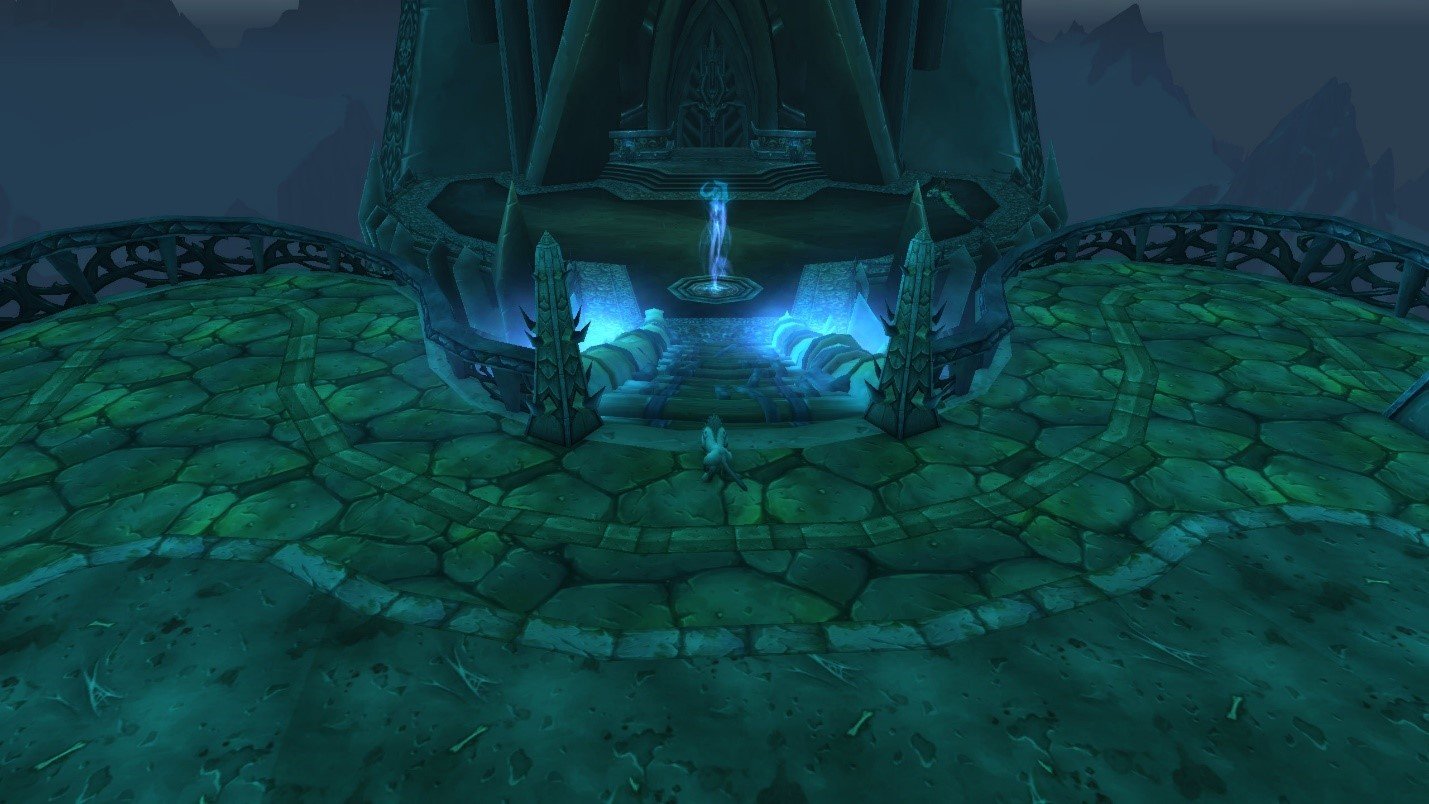 Usually, for lead-ins to expansions, we have a whole scenario which we need to play through. The upside of the scenarios is they have allowed players to skip over them after completing once on a character. The intro for Shadowlands appears not to be a scenario, but rather just a regular questline which takes players from Icecrown Citadel to the Maw. As much as I enjoyed the questline, I hope the fact it isn’t a scenario won’t make it not skippable on alts.

It appears this intro questline kicks off shortly after the events of the trailer revealed at BlizzCon last year. We (both members of the Horde and Alliance) meet with Bolvar because, in addition to ripping a hole in the sky, Sylvanas has also absconded with a few prominent members of both factions. There’s a bit of a debate about if people should be sent after them and who should go, but it pretty quickly comes down to our character and some members of the Ebon Blade. Also, Bolvar makes it very clear we can’t return the way we are entering the Shadowlands, which reminds me a bit of when we traipsed into alternate Draenor back in Warlords. 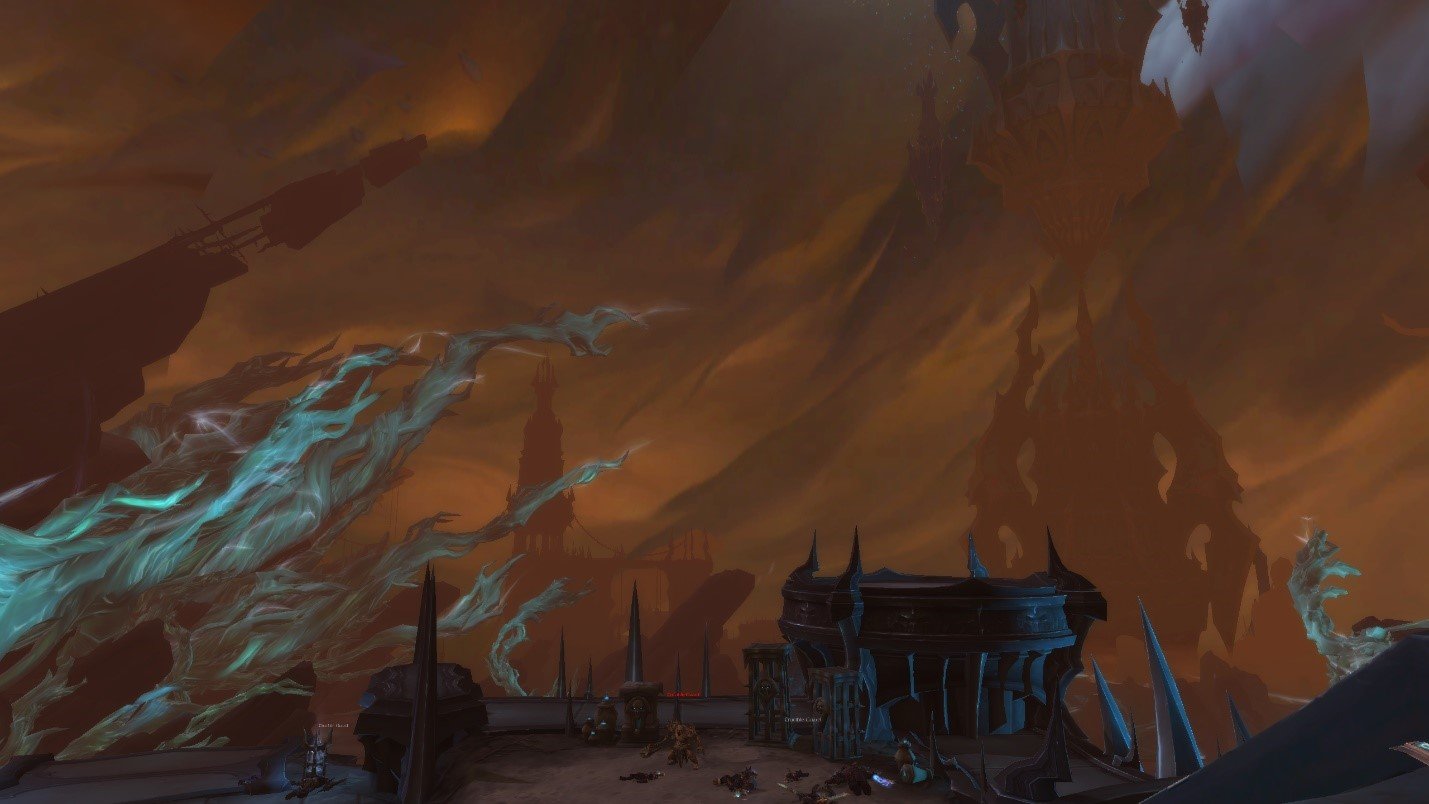 The Maw is just amazing looking. The work done on the sky is utterly mesmerizing. In certain parts, I could see the broken sky from the opposite side; in others, it looked like there were solid wisps of anima reaching up towards the hole. As detailed as the sky was, the land was equally detailed and bleak. There are even depairing souls running around bemoaning their fate amongst the most thickly packed map I’ve seen on the Alpha yet. Everywhere is densely packed, which would have made getting about difficult if I wasn’t able to stealth around. Honestly, stealthing negated a lot of the danger and allowed me to complete various quest steps much more quickly.

As you might expect, the storyline revolves around finding our missing compatriots and trying to escape from the Maw when no one has ever done that before. One exciting tidbit one of our friends mentions while in the Maw is that they have tried to escape many times before, but somehow every time, even when they think they are successful, they end up back in their cages. This stuck out to me because it echoed what happens in a specific area of Torghast. This would seem to indicate Torghast isn’t the only area the Jailer has complete control over and can toy with those in his possession. 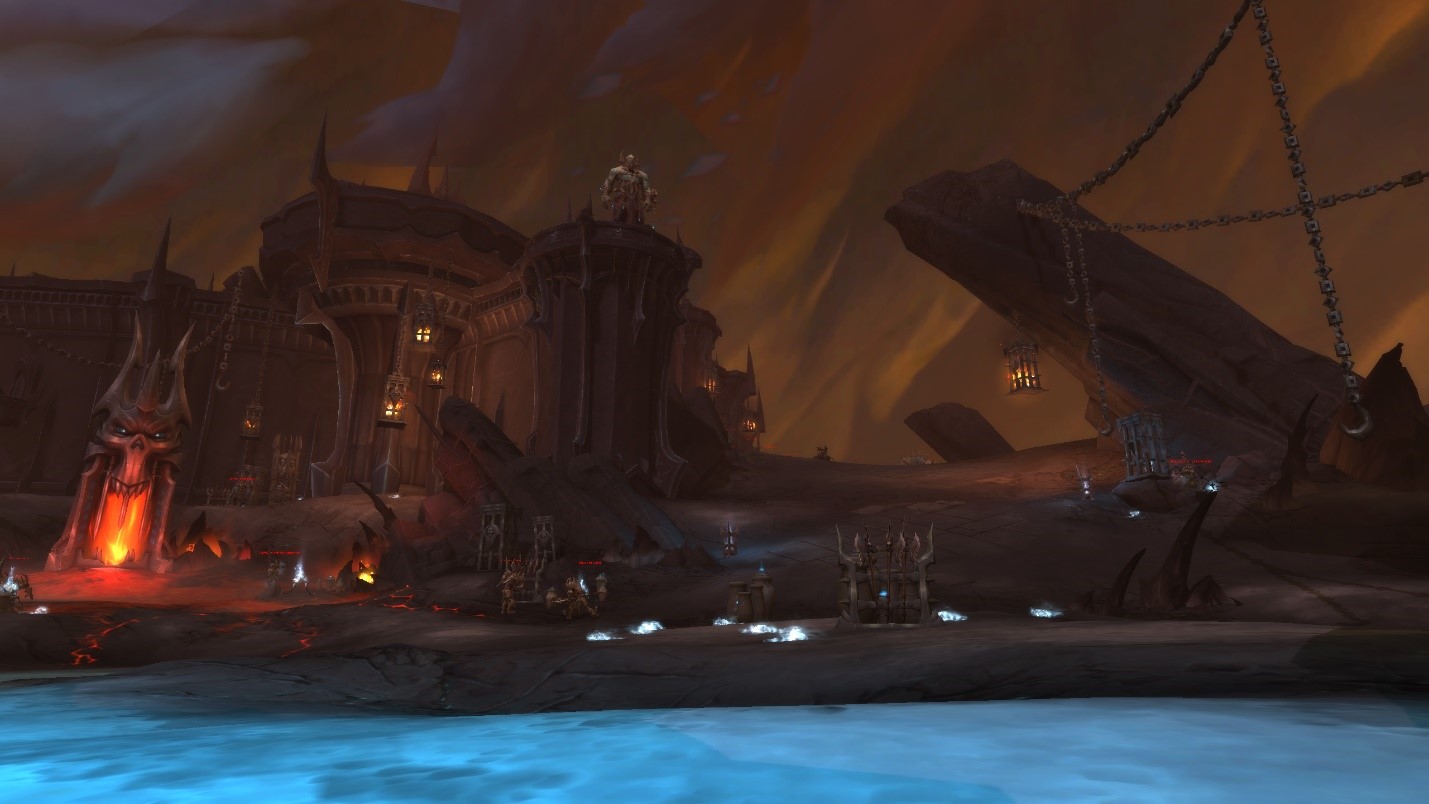 I really wanted to get into more of the dungeons over the last two weeks, but unfortunately, after the maintenance, the Alpha bugged on me and wouldn’t run anymore. This, of course, cut down my playtime a lot. It is working again now, so hopefully, next time, I’ll be able to talk about the dungeons more. I’d also like to spend some time leveling in the various expansions to see how well that works at this point. If there’s anything any of you’d like to hear about specifically, let me know, and I’ll take a look.