When I first booted up Pokémon Legends: Arceus last Friday, I was going into it pretty blind. I hadn't read any reviews, nor had I listened to any discourse on the RPG leading up to the release of the game. I wanted to experience the new iteration of Pokémon in a bubble.

Seeing Jubilife Village in game was a treat at first, but it became pretty apparent that this sign of civilization was one of the few I would experience in my time in Arceus. Unlike previous Pokémon titles, there isn't a march from city to city, battle gym leaders and solving puzzles. Rather, the new title is set in ancient Sinnoh, called at the time Hisui, before the region was fully settled and built upon.

As a result, instead of traveling between towns, you travel between regions with Jubilife acting as your home base or hub. It works, at least at first. However, around 15 hours in since launch I'm finding myself yearning for more interaction other than the central city and the myriad camps you uncover throughout the world. Each of the regions feel empty and unsettled as a result - no doubt by design as a way to show the untamed Hisui before the modern skylines of Diamond and Pearl.

Pokémon Legends: Arceus features multiple different biomes to explore throughout the course of the story, each region having its own distinct feel - and Pokémon to capture. There's a swamp that sees Gravelers rolling around with wild abandon, as well as a grassland at the beginning where Ponyta roam wild. 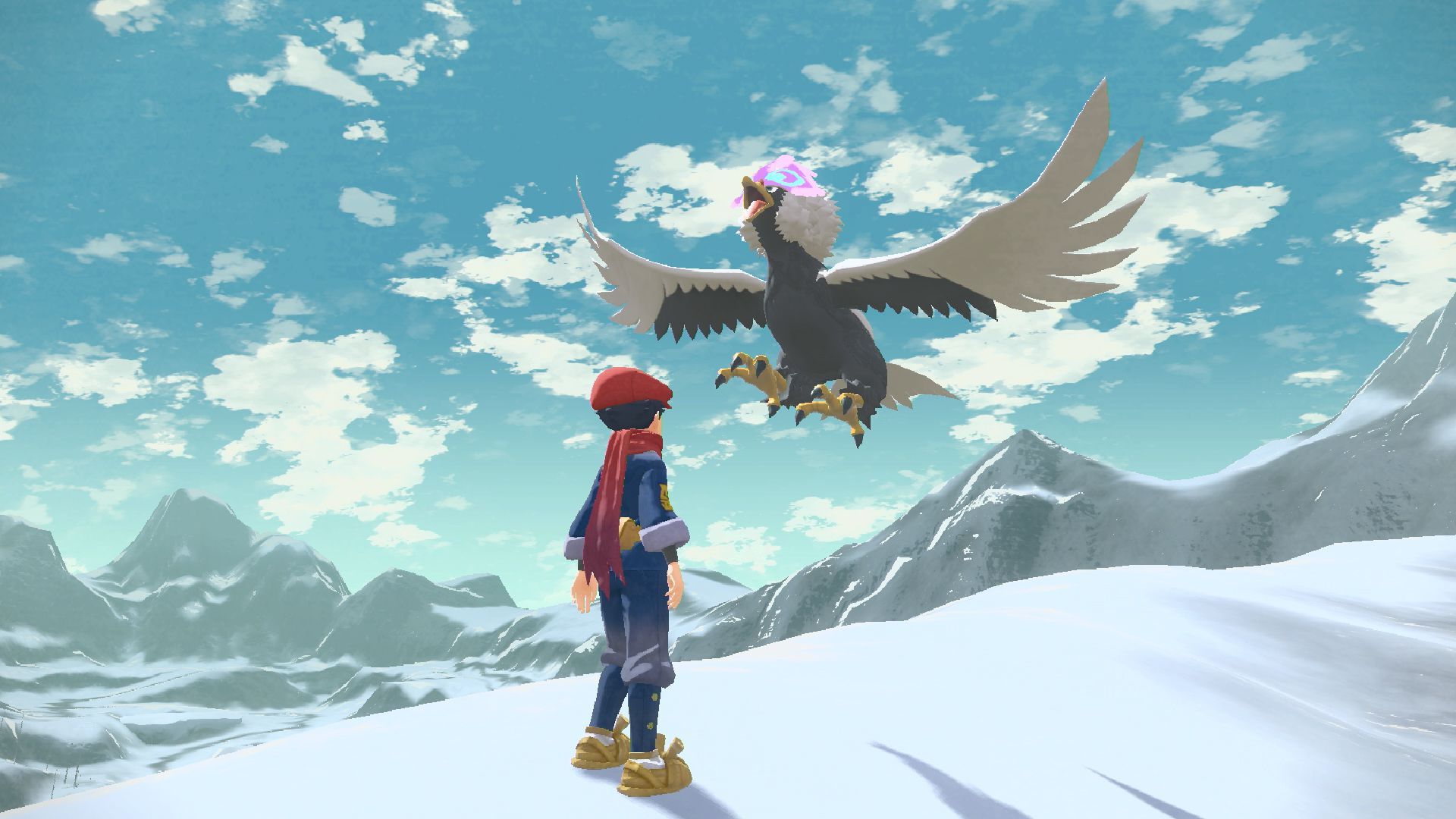 However, because of the way the world is built, it also means I felt I was traveling the same terrain over and over again, with nothing to really break it up. Sure, there are differences inside each biome itself, and no two are alike, such as the dense forest in the first real region of the game, or a rolling tundra in the Alabaster Icelands region.  The Pokémon you encounter in each are also mostly different, and they make sense to the area in the biome they inhabit. Psyduck hang out near the water while Combee can be seen hanging around trees to escape into when you get too close.

Normally the different routes and distances are broken up by multiple cities and settings, such as Mt Moon in the original between Pewter and Cerulean City. The towns themselves, even in the early days, had their own distinct feel and layouts to them that broke up the monotony of the routes and grasslands to travel.

The issue I'm facing with Arceus, however, is that lack of variety in civilization. The world feels smaller, and each stretch of land in the different biomes just adds to the sense of emptiness when you realize there isn't a new city or town to discover on the horizon. Instead, it's just more biome.

It doesn't help either that, visually speaking, Pokémon Legends: Arceus isn't that great. Sure, the art style is attractive and can normally cover up a multitude of sins, but Pokémon Legends feels dated even by Switch standards. Textures are flat and muddy, pop-in is incredibly close, and Pokémon you encounter at a distance refresh at a framerate that is, frankly, laughable. The different biomes looking bland and uninteresting for the most part do not help sell the vision Game Freak set out to create.

However, while the world feels empty, it also feels alive. It has the soul of what makes Pokémon so good for so many years: the Pokémon themselves.

Remember the Graveler I mentioned earlier? Watching it just roll around in the swamp, not a care in the world really helped root me in the world in a way that the actual biome never could. Encountering an Alpha Rapidash running swiftly across the Obsidian Fieldlands, majestic and free was such a cool sight early on. Pokémon behave like you might expect them to as well. Paras are more ferocious than they have any right to be, while Starly reminds me of the birds that would scatter when we'd approach the quad at my old high school when I would get close. 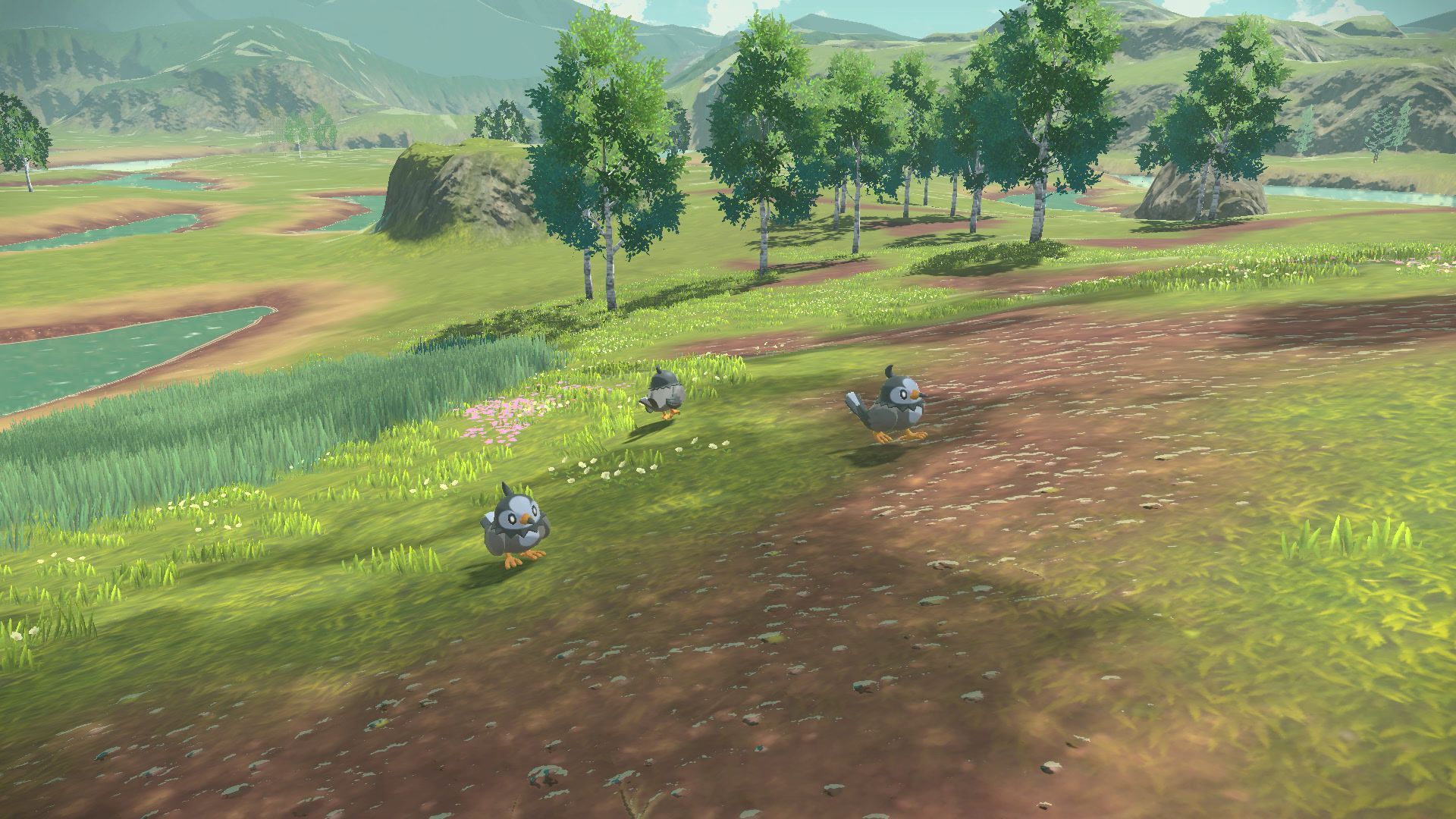 I remember when I first stumbled up an Abra in the wild as well. The first time I didn't really know what I was seeing (thanks again, visuals), but when I got close enough and realized it was an Abra I was pretty excited. A few seconds later, however, the Pokémon had teleported away. It reminded me of those times as a kid playing Pokémon Blue Version that I would furiously try to catch an Abra before it teleported away, whether through sheer luck of a PokéBall working the first try or putting the Abra to sleep first.

Having that same experience, yet this time in the over world as I crept towards the few Abra still left in the area was one of the major points early on that sold this experience for me. The formula that Game Freak has made with the overworld interaction and the new way to catch and battle Pokémon should be standard in every game moving forward.

Pokémon Legends: Arceus' world has distinct flaws with its overworld that I hope future Legends titles address. Yet, despite this, it retains the soul of what has made the series so enduring. It's Pokémon shine through everything, and it makes me want to keep picking it up, despite the issues, to catch them all.