When No Man’s Sky launched in August 2016, many  players were disappointed with what Hello Games had delivered. No Man’s Sky was playable, but it didn’t look like what was shown in pre-release footage, and many of the promised features were severely lacking or missing entirely. Hello Games has stayed the course, though, and No Man’s Sky is now heralded as one of the industry’s biggest turnarounds. The Waypoint Update released last week is the 21st major update for No Man’s Sky, so today, we are sifting through all of those updates to bring you 10 of the best features added to No Man’s Sky since its failed launch.

It’s hard to believe that a survival exploration game would ship without any base building, but when NMS launched, it was just you, your ship, and the galaxy. Players didn’t have to wait long to build a base, though. In November 2016, the Foundations Update added the first base-building elements to NMS. Hello Games has added so much more to base building since then, including hundreds of new parts, farms to tend, and even settlements to take over and control.

Do you remember how Hello Games vaguely stated that NMS had multiplayer, only to backtrack and downplay the multiplayer aspects right before launch? Do you also remember how two players quickly made it to the same spot in the galaxy and couldn’t see each other, only to have HG say that they were at least sharing the same galaxy even though they couldn’t see each other? Well, with the No Man’s Sky Next Update, players could finally meet up and play together in the same space. Co-op play has expanded since then, but this was where Hello Games finally fulfilled one of their major pre-launch promises.

The ability for players to connect online didn’t end with multiplayer, either. Initially only available on PC, PS4, and Xbox One, the Next Generation Update included many visual and performance upgrades to optimize gameplay on the PS5 and Xbox Series X (PC players benefited from this too). Crossplay and 32-player sessions were also added, making NMS a cross-platform experience. Since then, NMS has also gone mobile with its recent release on the Nintendo Switch, and it’s a must-play on Steam Deck. 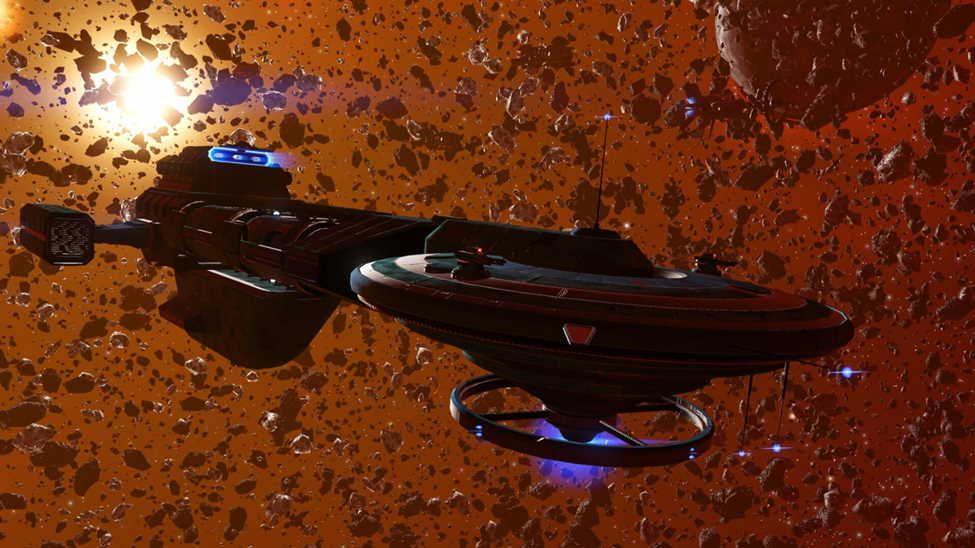 With the addition of freighters, players could finally build a permanent, mobile presence off-world. Freighters aren’t just multi-purpose storage containers or starship garages. Many of the technology upgrades and modules available to build planetside can be constructed in your freighter. The freighter also has some unique building blocks, like the Fleet Command Room, which is used to launch expeditions.

Not every enhancement or addition has to be earth-shattering. Case in point - the addition of the third-person view in the NEXT Update. Viewing perspective is a surprisingly polarizing feature in games, and although I still prefer using first-person view in NMS, other players seem to love it. Some games, primarily PvP titles where a different perspective can give one player an edge over another, need to stick to a single choice. No Man’s Sky isn’t one of those games, so kudos to Hello Games for giving players a choice.

When NMS first launched, traveling across a planet was a pain in the butt. You had to walk to your destination or return to your spacecraft to make a short hop to your next destination. With the addition of the Exo-craft in the Pathfinder Update, players could finally go free-wheeling across a planet’s surface. Other updates saw the addition of submarines to explore a planet’s oceans, frigates that serve as a base in space, and exo-suits that enhance survivability in extreme environments.

Yeah, just saying bug fixes is pretty vague, so let me explain. How many games can you think of that still have major bugs that haven’t been fixed years after their initial launch? Every Bethesda game and every MMORPG ever made kicks off the list. So many games focus on pumping out DLC to generate more revenue; they completely neglect going back and fixing what’s already there. To their credit, Hello Games has returned and fixed many of the major bugs in NMS even as they continue to pump out regular content updates. I know it’s easy to scream that the bugs should have been taken care of before launch, but given the number of “cash grab” games that launch full of bugs and then fade away, you have to consider it a positive that Hello Games had the integrity to clean up their mess. 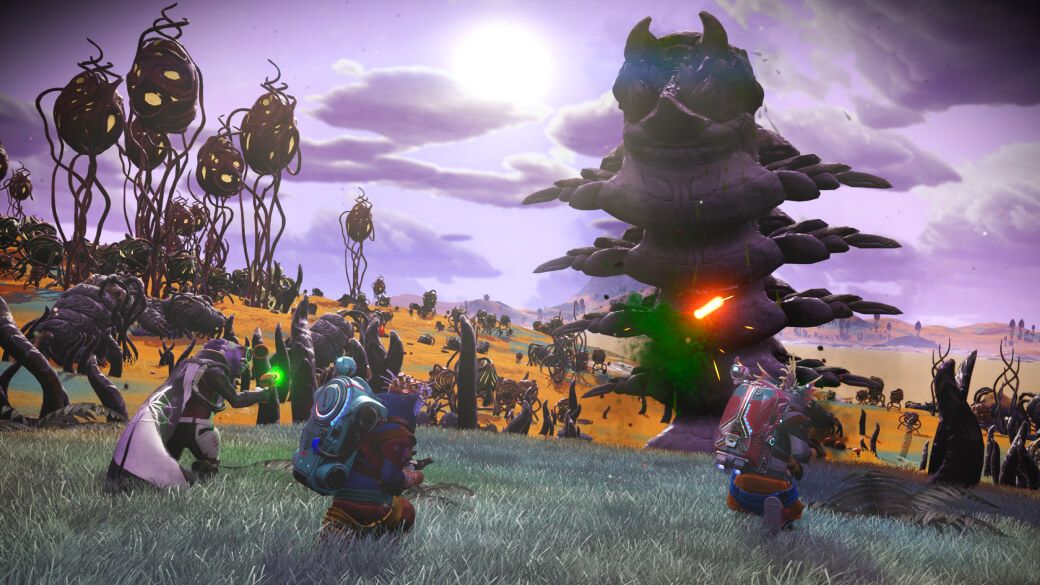 The pre-release gameplay footage of No Man’s Sky showed us beautiful planets full of dense flora and majestic fauna. I have to agree with the masses that the planets didn’t live up to expectations, and no matter how humorous I found the absurdly generated creatures, others weren’t quite as forgiving. There isn’t any specific point where all that changed, but the updates to planet and creature generation across multiple updates have really made a huge difference. New planet types, underwater biomes, dangerous new environmental effects, and all kinds of unique vegetation and creatures have been added to an improved procedural generation algorithm. And with all of the visual fidelity upgrades NMS has seen over the years, the planets you’ll find in-game now blow away everything we ever saw before the game launched.

Not only did the additions of companions mean you could tame wild creatures and keep them as pets, but players could also genetically modify eggs to create new species. And not only could you show off these pets to your friends and strangers on the Nexus, but you can even summon them for use as a mount.

Some gamers may be excited by NMS’s arrival on the Nintendo Switch, but I would say the most exciting feature of the Waypoint Update is the improved inventory. For long-term veteran players, that excitement is actually anger about the changes. Still, for new or returning players who haven’t spent hundreds of hours in-game, the latest updates are generally positive. The inventory layout is more streamlined and straightforward to use than before, and organizing extensive inventories is much more intuitive. Given time, hopefully vets will figure out how to overcome the changes. 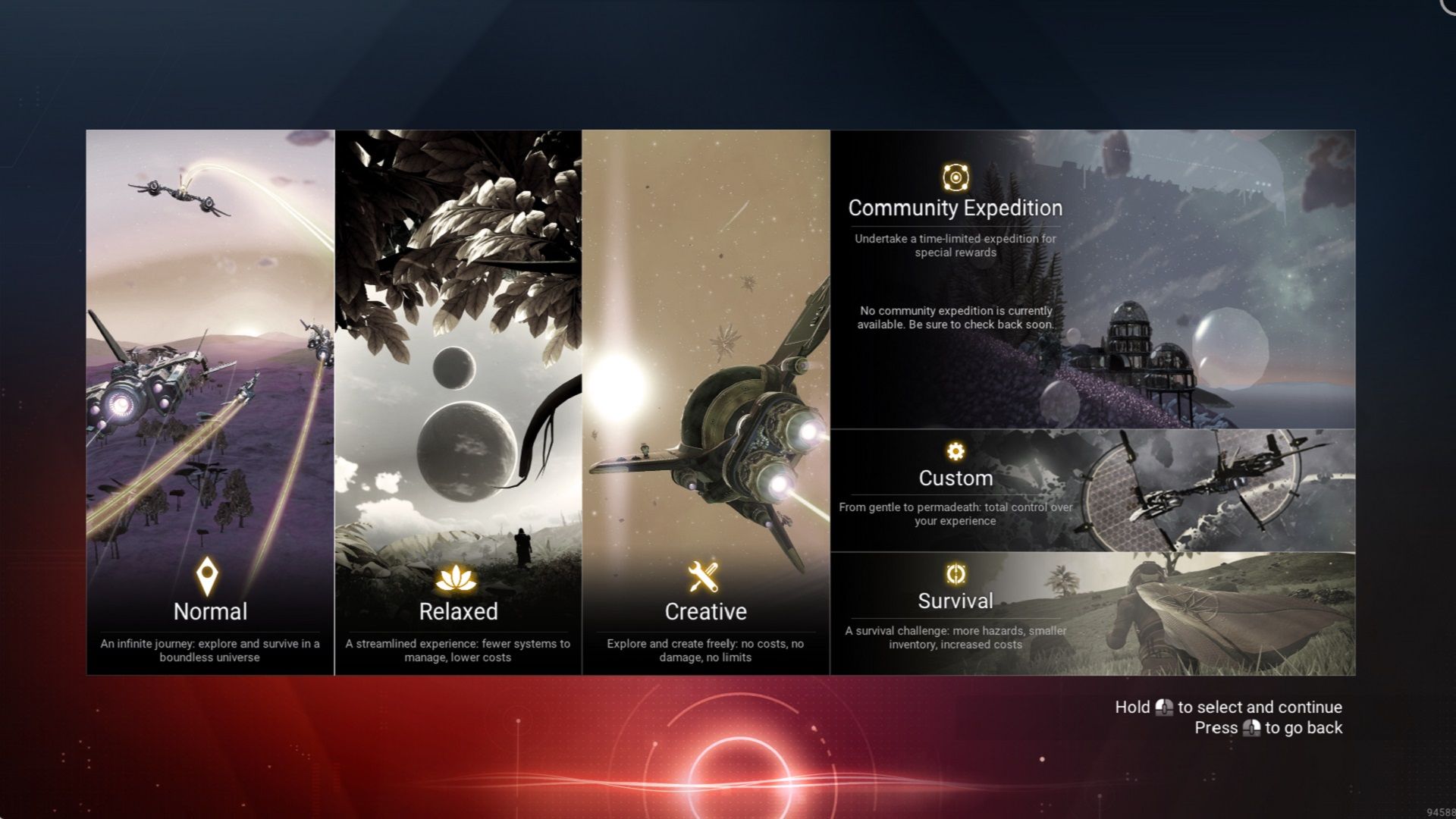 With the addition of Survival and Creative mode years ago, players have had a rudimentary way to change the difficulty of No Man’s Sky for quite a while. With the Waypoint Update, Relaxed mode allows players to explore a non-hostile galaxy. Custom Mode takes this even further by allowing players to mix and match gameplay elements at will, leaving out things they don’t like and keeping what they enjoy the most. The customization is even granular enough that players can manipulate each element to give them just the right amount of difficulty for their tastes. It’s a huge step forward in making NMS accessible to a broader audience, and more players are always a good thing.